This operette in 3 acts by F Zell is based on the comédie-vaudeville Nanon, Ninon et Madame de Maintenon by Emmanuel Théaulon, Armand d’Artois and Lesguillon. It has music by Richard Genée and premiered at Theater an der Wien, Vienna, on 10 March 1877. 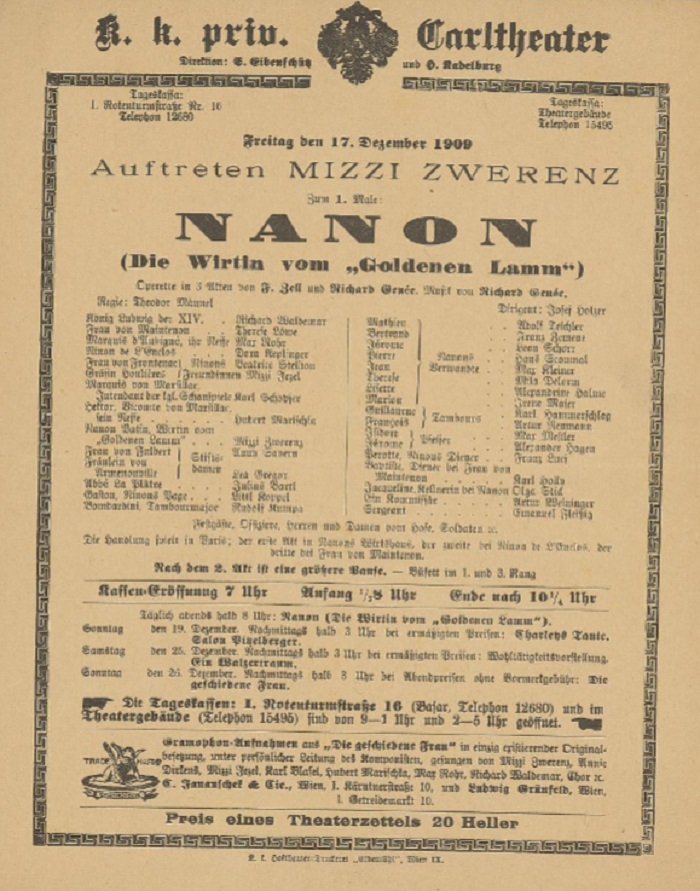 The playbill for “Nanon” at Theater an der Wien with Mizzi Zwerenz, 1909. (Photo: Theatermuseum Wien)

Zell and Genée’s long-popular operette was based on a comédie-vaudeville from the early part of the French century and it told the story of Nanon, the hostess at the Inn of the Golden Lamb (Bertha Olma), and of her romance with the man she thinks is a drum major.

He is actually the gaily philandering Marquis d’Aubigny (Jani Szíka) and as, when it comes to the point, he has no intention of marrying the little innkeeper, he arranges opportunely to disappear by getting himself arrested for duelling. In order to try to win his release, Nanon goes to beg the court beauty Ninon de l’Enclos (Caroline Bendel) to use her influence with the King. Unfortunately for all concerned, Ninon is the merry Marquis’s uptown lady. 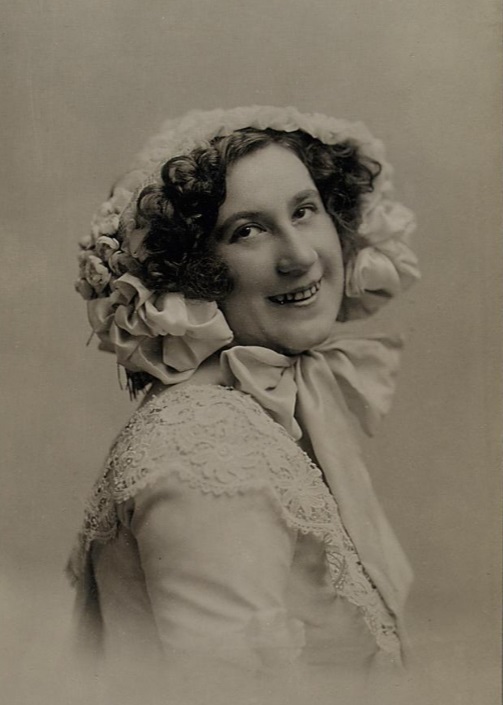 Ultimately, when d’Aubigny accidentally gets into genuine hot water and Nanon’s pleas to the King himself save his head, he revises his behaviour and makes her his Marquise.

The chief comic rôle of the Marquis von Marsillac, master of the king’s revels, was played by Carl Adolf Friese, and the smaller rôle of his nephew Hector by the rising Alexander Girardi, whilst Bertha Steinher played Gaston, Ninon’s page. 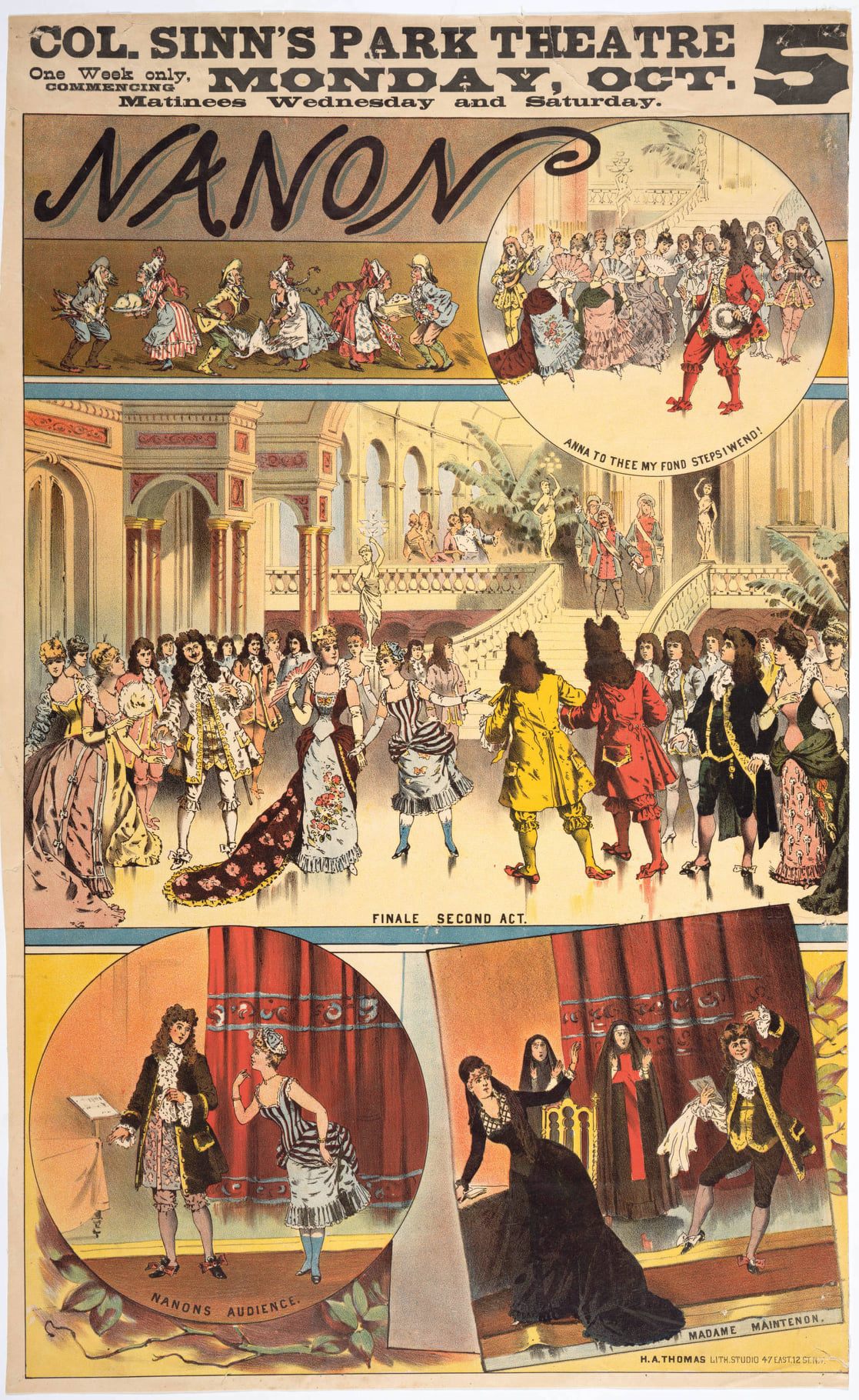 Genée’s musical score was a catching one, with the usual mixture of waltzes (‘Beim ersten Mal, wo er sich geschlagen’) and marches (Marsch der Wache, Marsch der Trommler & Pfeiffer), plus a minuet (‘Nach diesem Intermezzo’) and a polka (‘Man lernt’s mit der Zeit’) topped off by a pretty lullaby and a lively entrance piece for the heroine.

Nanon also had effective duos with both Ninon and d’Aubigny, and the second soprano, Ninon, some lively second-act couplets (‘Was du nicht willst, das die geschehe’) which proved one of the evening’s favourite numbers. (For more information on recordings of Nanon and other Genée operettas, click here.)

There were a whole series of bright pieces for Marsillac, one teaching Hector how to behave (‘Den Kopf jetzt in die Hoh’’) another, and the most successful, a drinking song (‘Ventre saint gris!’), a third theatrical (‘Tritt man bei Ninon an’), and a fourth (‘Wenn ich auch Philosoph bin’) which came to the conclusion ‘Der Weiseste der Weisen ist wer zeitweise die ganze Weisheit vergisst’. Alongside the comedian, d’Aubigny was rather less prominently served, his only solo being a little romanze in the first act. 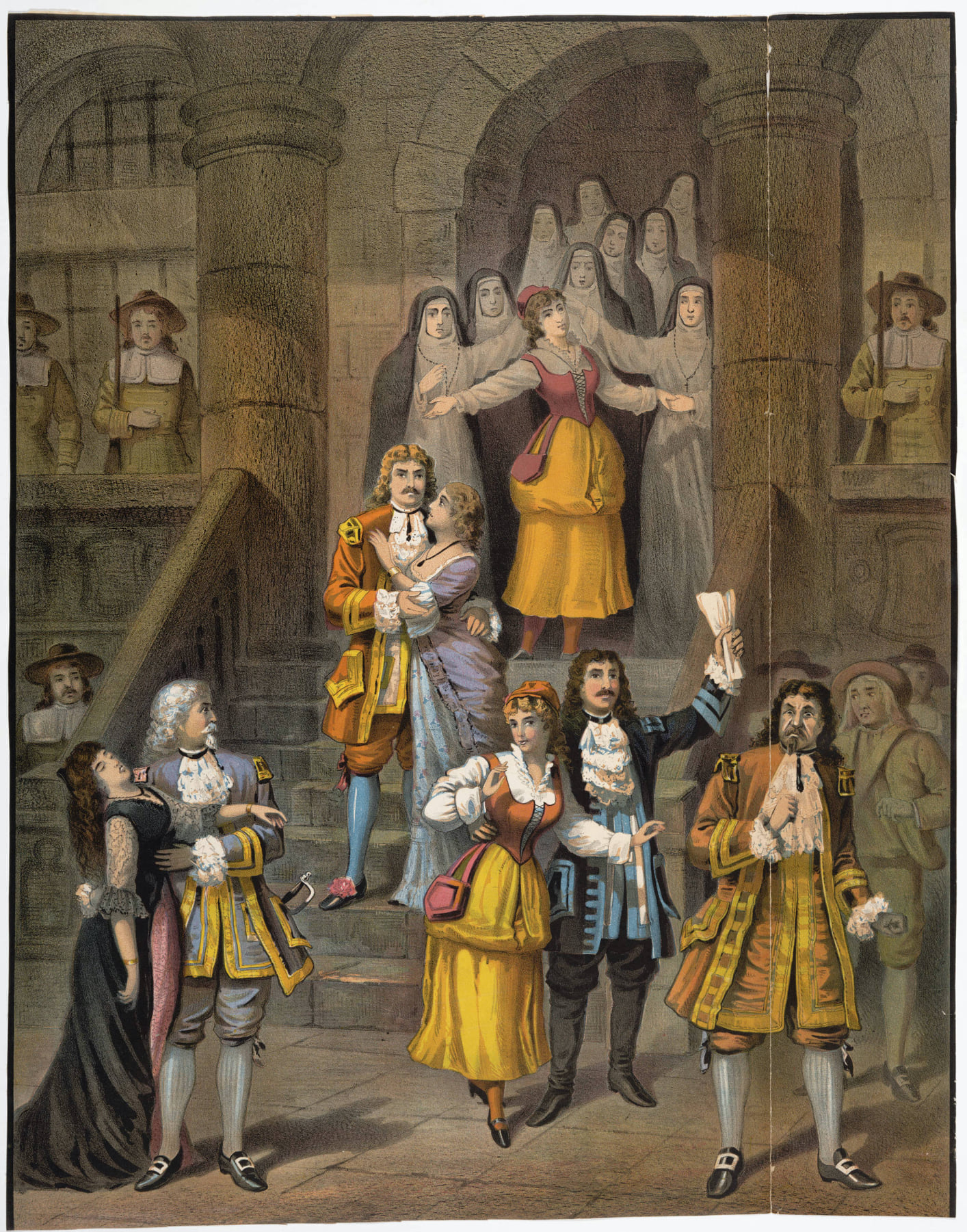 Oddly, the show which was to run to many hundreds of performances in all sorts of languages over the next 40 years or so was given only a handful of showings on its original production in Vienna.

Even when it was later revived at the Theater an der Wien (19 Sept 1885) with Paula Löwe (Nanon), Antonie Hartmann (Ninon), Girardi (Hector), Heinrich Thalboth (King) and Josef Joseffy (d’Aubigny), its total exposure on that stage still came to only 28 performances, and a production at the Carltheater in 1909 with Mizzi Zwerenz (Nanon), Dora Keplinger (Ninon), Hubert Marischka (Hector) and Richard Waldemar (Louis) added only another 18 nights to the tally. 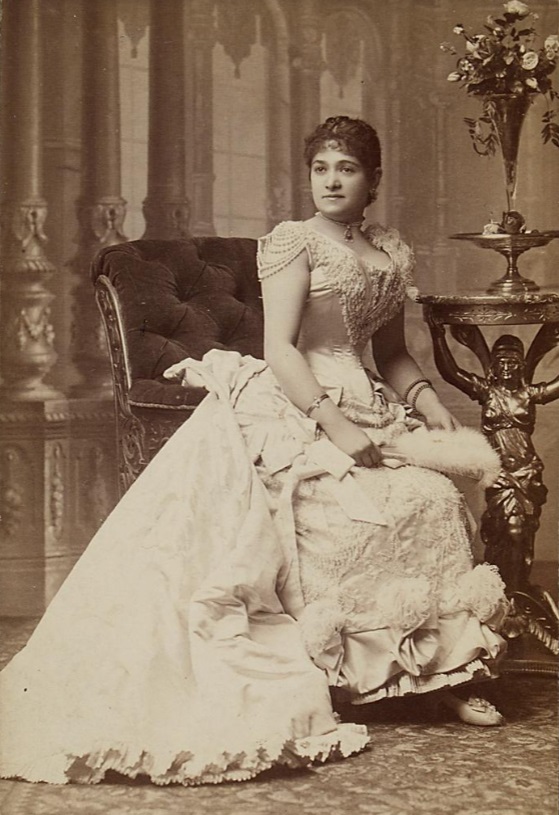 Its short life in Vienna may have been the reason that it was slow to travel. Hungary’s Népszinház, which had had such a success with Genée’s previous Der Seekadett mounted a production (ad Jenö Rákosi) in 1877 which played just a few performances, and Berlin’s Walhalla-Theater, the next international house to pick up the piece, did not mount its production until 1883. When it did, however, the results were staggeringly different.

In the 12 months following its first Berlin showing Nanon played more than 300 performances, and the Operette was well and truly launched. It galloped through the houses of provincial Germany, was played in German-language theatres in Hungary and Russia, at Riga, Basel, Strasbourg, Prague, Brussels and at New York’s Thalia Theater (2 January 1885) where it scored another big hit with Emmy Meffert (Nanon), Franziska Raberg (Ninon), Ferdinand Schütz (d’Aubigny) and Otto Meyer (King Louis) featured. Later, Emma Seebold took over the lead rôle and the show reappeared regularly in the Thalia repertoire thereafter till the end of Gustav Amberg’s tenancy in 1888. 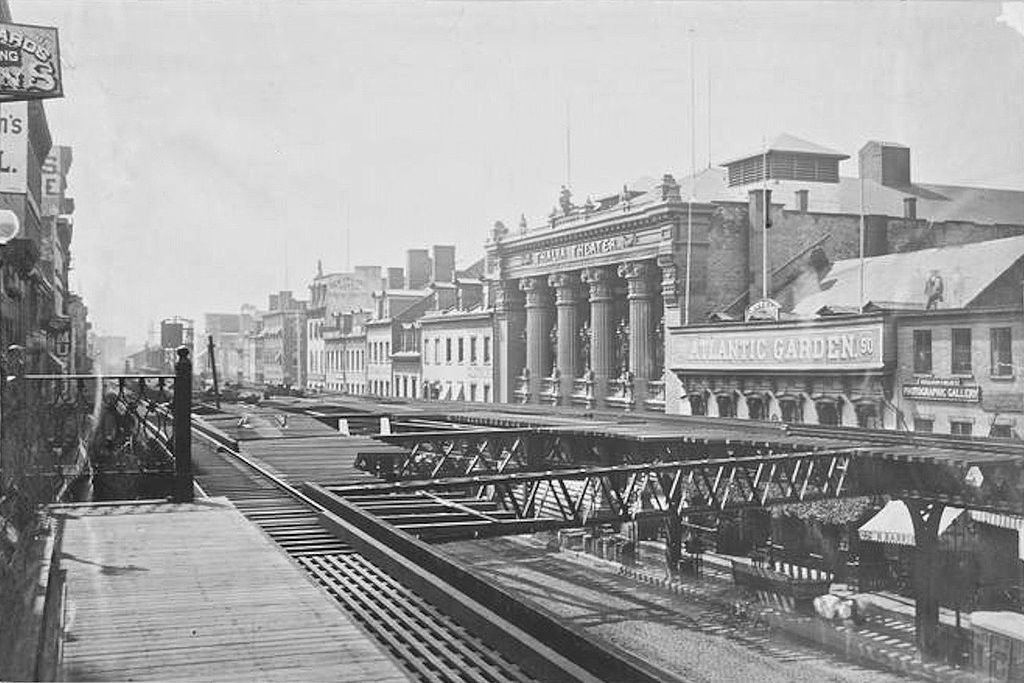 In the meanwhile Nanon had been picked up by New York’s Casino Theater, where it was mounted with Sadie Martinot, a very shapely lady who had climbed into the star-system since being America’s original Hebe in Pinafore, as Nanon and another singing beauty, Pauline Hall, as Ninon de l’Enclos. William T Carleton (d’Aubigny), Francis Wilson (Marsillac), Alice Vincent (Mme de Maintenon), W H Fitzgerald (Hector) and Gustavus Levick (Louis) supported the two stars, and the show ran a superb four and a half months (152 performances), qualifying as a major hit. 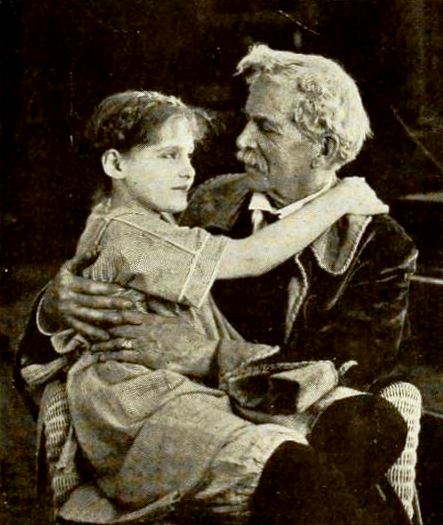 It was widely toured thereafter both by Carleton’s own comic opera company and by Miss Hall’s troupe and brought back to Broadway in 1892 (12 January) with Marie Tempest as the lady of the title, paired with Drew Donaldson (Ninon) and Schütz now playing d’Aubigny in English.

Nanon remained one of the most popular of all Austrian Operetten in America for many years, thoroughly outpointing most of the works of such composers as Strauss and Suppé, as it was played regularly and widely throughout the country. 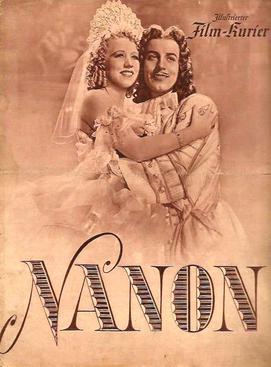 The cover of “Illustrierter Film-Kurier” with Johannes Heesters and Erna Sack in the 1938 Nazi film version of “Nanon.” (Photo: Wiki Commons)

Nanon was also played all over Europe in the 1880s. It was adapted into Swedish, Polish, Croatian and Italian, revived at the Népszinház (as Nanon, Ninon) in 1892, at Berlin’s Theater Unter den Linden in 1895 (23 March), and appeared at Berlin’s Deutsches Opernhaus in 1917 in one of many productions throughout Germany, at first in its original state and latterly in the inevitable adapted versions (Städtische Bühnen, Lubeck, 6 February 1938 ad A Treumann-Nette).

However, in spite of its triumphs in other countries, the show never became part of the repertoire in Austria, nor was it ever staged in France, whilst a British production, mounted (well) in the wake of the American success, failed to reach the West End. Produced at Birmingham in an indifferent adaptation with two very capable vocalists in Laura Clement (Nanon) and Esme Lee (Ninon) featured as its central ladies, it toured discreetly and closed.