Not seen in London since its original production at the Piccadilly Theatre in 1968, when it starred Keith Michell as Don Quixote/Cervantes, Joan Diener and Olive Gilbert, this ‘musical play’ has just been revived in order to boost English National Opera’s finances. The original London production was not that successful, even when brought back with its original American star Richard Kiley to fill a ‘dark’ theatre the following year. (I actually saw it!) But it was recorded in its entirety for issue on two LPs. 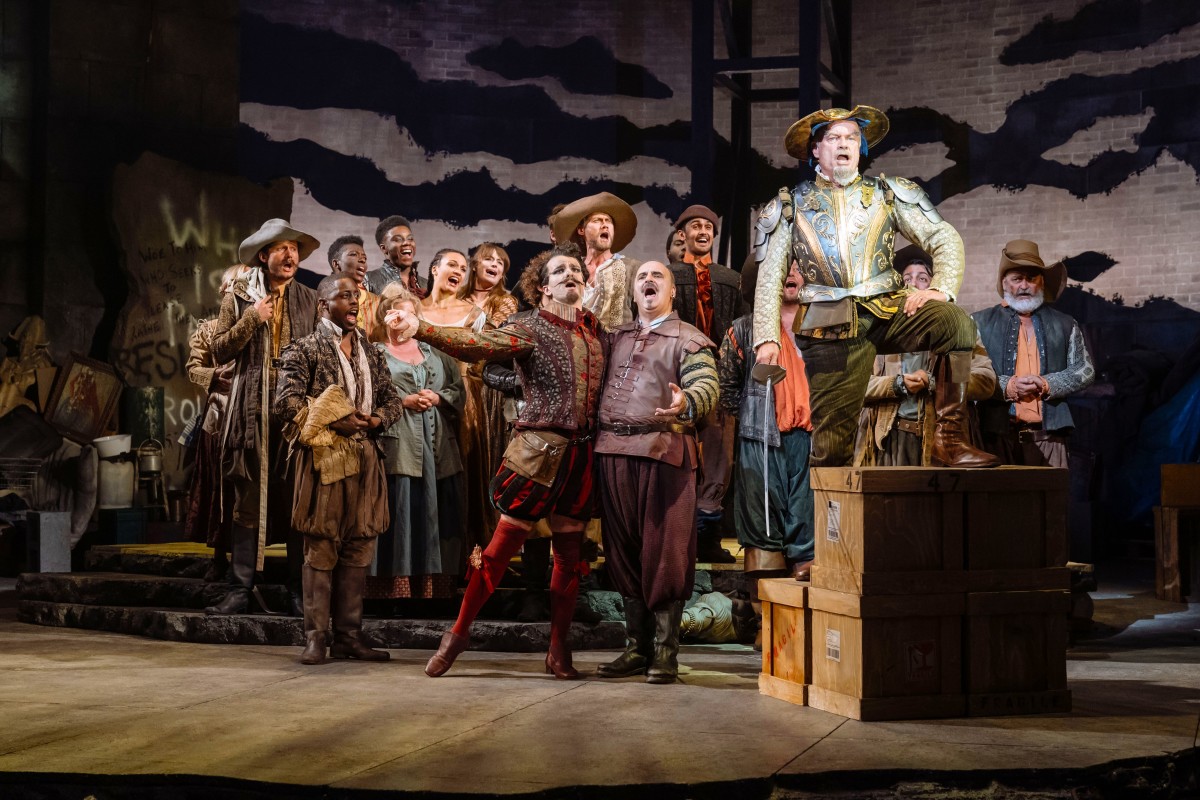 Kelsey Grammer as Don Quixote in the “Man of La Mancha” production by Lonny Price at ENO (Photo: Manuel Harlan)

Apart from Cervantes’ novel, Man of La Mancha is based on a television play by Dale Wasserman, originally having lyrics by W. H. Auden, until it was quickly realised that these were far too poetic and did not set well to music. Mitch Leigh, who studied with Hindemith, and mostly composed advertising jingles for American television, had written the incidental music for the original TV script and was therefore asked to provide all the remaining music needed, which won him several awards.

It uses the much-used framework of a play-within-a-play. Cervantes has been arrested and is thrown into prison where his fellow prisoners attempt to steal his manuscript, until he starts telling them the tale… 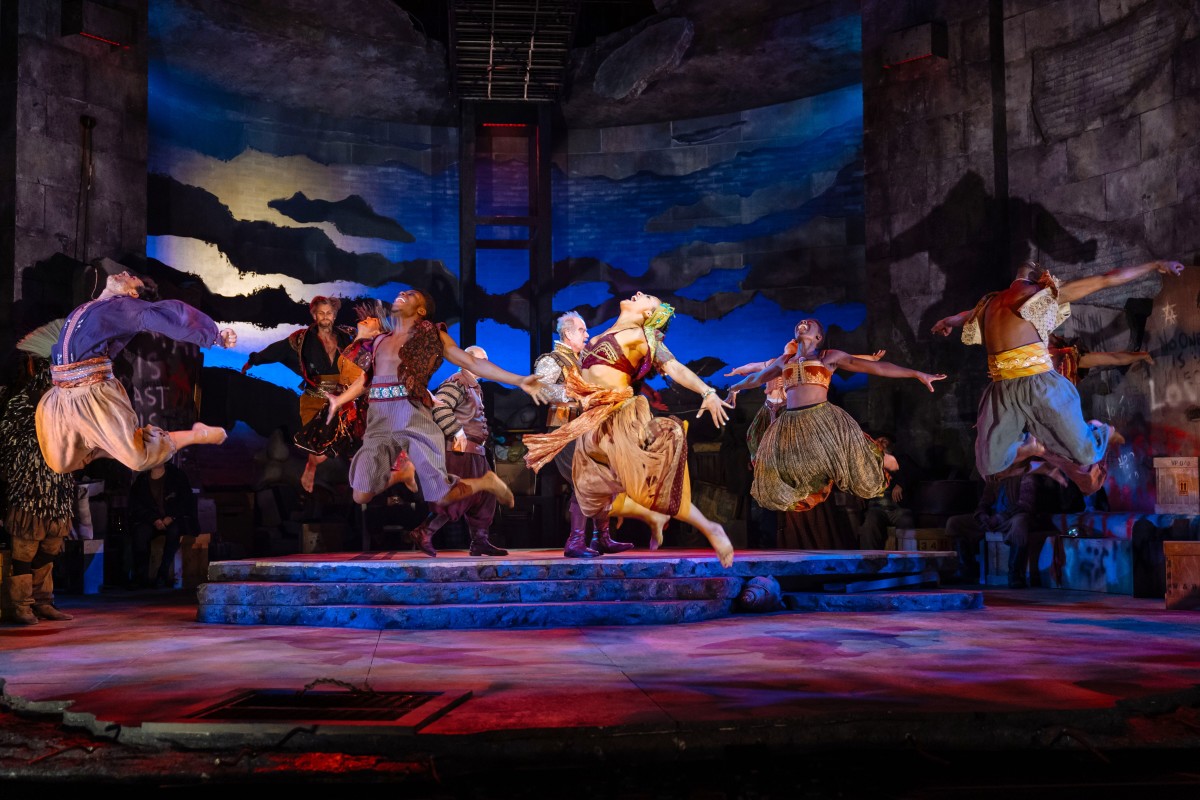 The company of “Man of La Mancha” in the production by Lonny Price at ENO (Photo: Manuel Harlan)

Musically, this new production is very successful, in no small part owing to the superb English National Opera Orchestra using new orchestrations, without violins, violas and cellos, by David White who also conducts with the necessary élan, giving the show tremendous impetus during each musical number.

They are ably assisted by Danielle de Niese as Aldonza/Dulcinea who uses her amazing physicality as well as her gorgeous soprano to bring her role fully to life. Her act two solo and rape sequence are almost breathtaking – she is not afraid to take risks!

Sancho Panza/Cervantes’ manservant is vividly portrayed by Peter Polycarpou: he has true stage charisma and is always subtly watchable. His experience in musical theatre shines through as we see the subtle nuances he brings to his characterisation. His diction is well nigh perfect – very difficult in the Coliseum’s notorious acoustic, and he is one of the very few on stage to get any laughs from the dialogue!

As Don Quixote/ Cervantes, Kelsey Grammer looks suitably careworn and weary and his ‘doleful countenance’ is always evident. He last appeared on the West End stage in the small-scale musical Big Fish, in which he was deservedly very successful.

Since then he appears to have lost a lot of weight and is the embodiment of the novel’s description of him. He proves to have a substantial musical style bass voice with a pleasant high range as well, even if his rendering of the show’s ‘hit’ (“The Impossible Dream”) is a little too meaty, though in the vast space of the Coliseum, this is perhaps necessary.

Nicholas Lyndhurst seems wasted in the secondary roles of The Governor/The Innkeeper, though makes as much of them as the script will allow, and proves to have a fine light singing voice.

The production itself is traditional, being staged in one composite set (James Noone) representing a prison  with a huge metal staircase that descends centre stage from the flies at various times and confining exits/entrances to two narrow passages up left and right. Lighting (Rick Fisher) is used rather weakly to denote the “Tilting at Windmills” scene but otherwise is imaginative and focused.

The director, Lonny Price has, with Rebecca Howell (choreographer) and Kate Waters (fight director) staged the musical numbers imaginatively. However the long stretches of dialogue keep on threatening to bring the show to a standstill, often lacking energy and leaving one longing for the next song! This is the part of the show which has dated most – what worked sixty years ago often  seems stilted now, which is a great shame.

The Coliseum production runs for 130 minutes, plus interval. The recent Volksoper Wien production that I saw – directed by Olivier Tambosi – ran for 105 minutes (no interval) and with no apparent cuts. It is difficult to compare the two productions as the Volksoper one was very much an ensemble piece, using a small cast of 20 singing actors plus the original theatre orchestrations, played on a large flat acting area which the actors adapted to their needs simply – the sort of production that Britain’s National Theatre would mount – quite unlike the usual Volksoper productions! 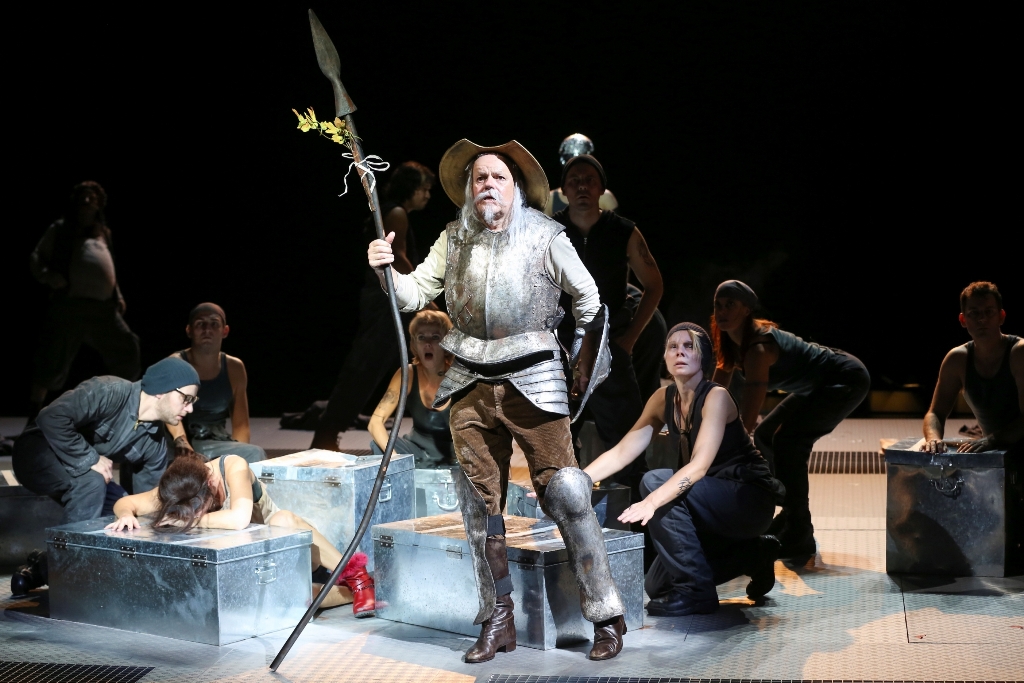 Robert Meyer was Cervantes/Don Quixote using Sprechstimme technique in “The Impossible Dream” to really draw the audience in, rather than a big production number.

ENO’s Man of La Mancha is well worth a visit during its limited six week run; it is a shame that no one realised that the ‘book’ needed much more care than it was given.

There are various recordings, but by far the best, if you can manage to beg/borrow/steal a copy is a complete BBC Concert Orchestra live version starring Ron Raines, who is magical as Don Quixote, and Kim Criswell who is easily able to cope with all the nuances of Dulcinea.

For more information on the ENO production and performance dates, click here.