New York Gilbert & Sullivan Players’s inspired pairing of two Victorian one-act comic operas – Ages Ago and Mr. Jericho – gets my vote as the most charming and delightful show of the year thus far. And indeed those two adjectives were on very much on the lips of just about everyone around me at the close of curtain. 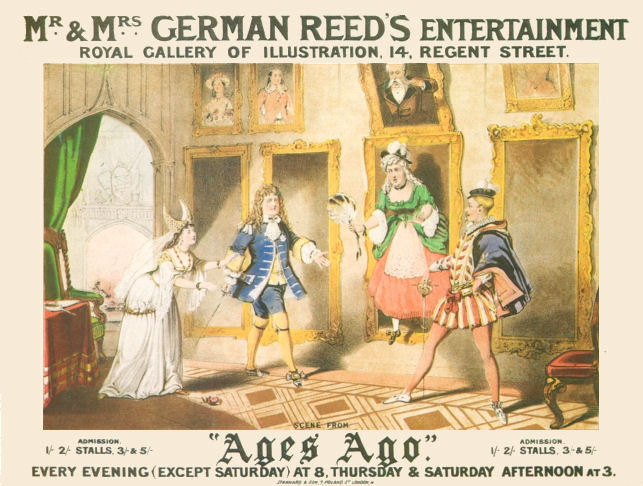 Theatre poster showing a scene from “Ages Ago” by W. S. Gilbert and Frederic Clay, 1869.

The former – with its libretto by W.S. Gilbert (before his partnership with Arthur Sullivan, though the two were actually introduced during the show’s rehearsals) and music by Frederic Clay – is, relatively speaking, the more familiar of the two. It’s been done periodically, including a memorable performance two years ago at Ohio Light Opera.

Written not for the Savoy, which would become the home of most of the Gilbert & Sullivan light operas, but rather German Reed’s Royal Gallery of Illustration in 1869, the show was an immediate success (350 performances) and had several revivals throughout the 1800’s. 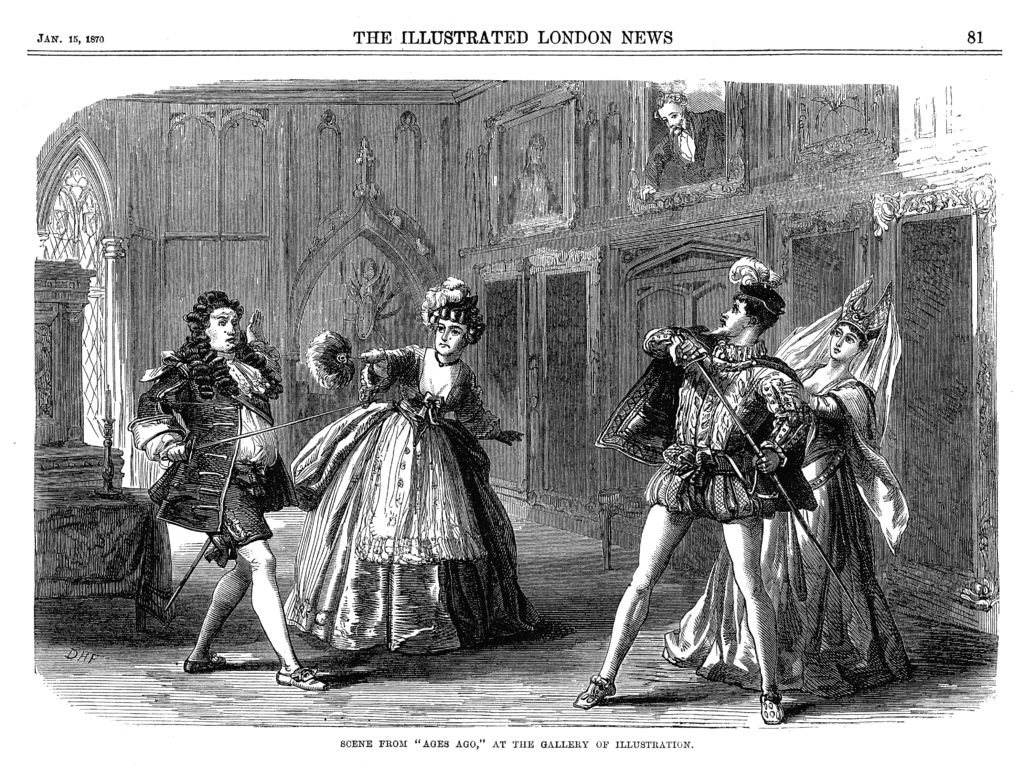 The plot concerns the inheritance of a castle, as we learn in the opening scene which introduces the current irascible squatter Ebenezer (Matthew Wages), his niece Rosa (Michelle Seipel), Scottish housekeeper Mrs. MacMotherly (Cáitlín Burke), Rosa’s poor suitor Columbus (Cameron Smith), and steward (James Mills). Columbus had just been there but missed his train and now returns needing to spend the night, much to crotchety Ebenezer’s displeasure. That evening, the paintings in the picture gallery come to life and various romantic alliances ensue among the subjects of the paintings, each one a prior owner of the property. By the time they return to their frames, they have amicably decreed who among the modern characters shall inherit the title deed. 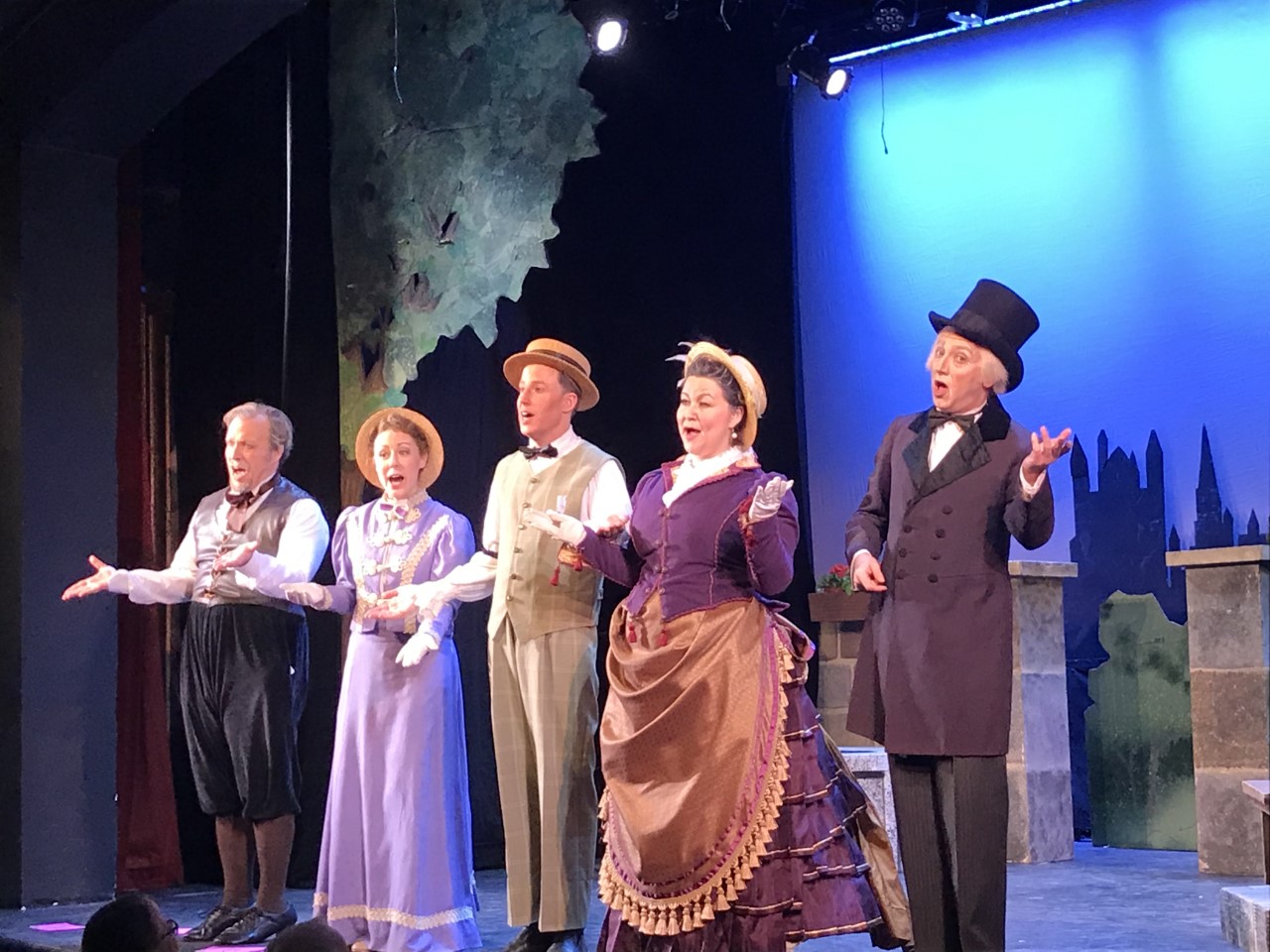 These roles were all played by the same five players as the opening scene, allowing for some impressive doubling. Rosa is now the lovely Lady Maud, the housekeeper is imperious Dame Cherry Maybud, Columbus is Cecil Blount, and Ebenezer is the amorous Lord Carnaby Poppytop. The steward shows up as Brown, the subject of a fifth portrait.

The cast skillfully differentiated the characters and nailed their classic comedy prototypes in grand style. Their singing was as apt as their acting. Vocally, Seipel as Lady Maud delivered her awakening aria superbly. Burke, much like a young Patricia Routledge, and Wages, all bluster as Ebenezer and predatory lust as Carnaby, were brilliantly funny.

Though the music isn’t nearly as memorable, of course, as what Sullivan would later compose for the second act of Ruddigore, wherein, famously, another picture gallery comes to life, the humor here is arguably even funnier, as the ancestors wrestle with such conundrums as whether a man might love his own grandmother, and whether the most recent owner of the portraits can do with them as he or she likes. 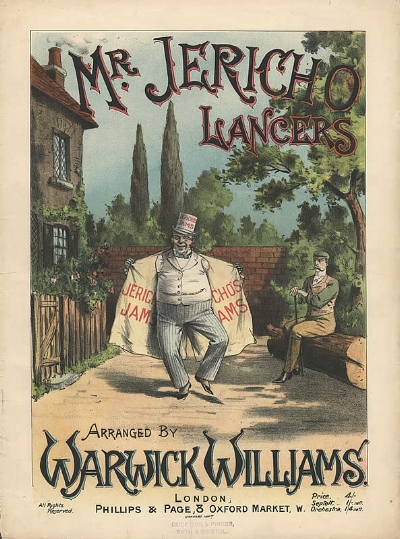 Mr. Jericho was written after the G&S partnership had dissolved post-The Gondoliers, and they were writing comic operas with other people until they reunited for Utopia, Limited. This one was the curtain raiser for Sullivan’s Haddon Hall and featured music by Ernest Ford and libretto by Harry Greenbank. I do recall a performance many years ago at the New York Gilbert & Sullivan Society, but this one is far more obscure.

It concerns an impoverished Earl, Michael de Vere (Wages), and son Horace (Smith), reduced to doing his own gardening in his small cottage, and bus driver, respectively. Horace falls for Winifred (Seipel), a young lady he’s admired on his bus which, shamefully, he has just crashed. Winifred’s dragon of a widowed mother Lady Bushey (Burke) won’t allow her daughter to marry a commoner, and resolves to lock her in her room. But when a jam manufacturer, the titular Mr. Jericho (Mills), turns up looking for a titled endorsement for his jam, and learns the the Earl genuinely loves it, he offers to restore the Earl’s (and young Horace’s) fortunes. And, as chance would have it, Lady Bushey is Mr. Jericho’s lady love from years before.

Both shows are great silly fun, and NYGASP’s five players – just as amusing in Mr Jericho – had the requisite style down to their fingertips. Their acting was so good and the scripts so funny, one felt the pieces might have been just as effective without songs at all. I would perhaps give the slight edge to “Mr. Jericho,” as it is just that much more concise and the songs a bit zippier. Jericho’s solo – infectiously delivered by Mills – extolling the virtues of “Jericho’s Jams,” for example, is quite the ear-worm.

The show was authentically directed by NYGASP Artistic Director Albert Bergeret who also served as Musical Director, and splendidly accompanied by Elizabeth Rogers on piano.

Albère’s scenic designs were pleasingly picturesque – the portrait gallery of the first, the cottage and garden of the second – and beautifully costumed by Gail J. Wotford. The intimate theater space was just right for these pieces, too, and gave the feeling of a real time capsule.

It’s a pity that this was only a three-day run, but perhaps NYGASP will find a way to bring them back in future, maybe as actual curtain raisers for one of their full-length productions.