With the BBC Proms totally ignoring Offenbach’s bicentenary, it has been left to London’s music colleges, small scale opera companies and amateur groups to help celebrate this Franco-German composer’s life and works. 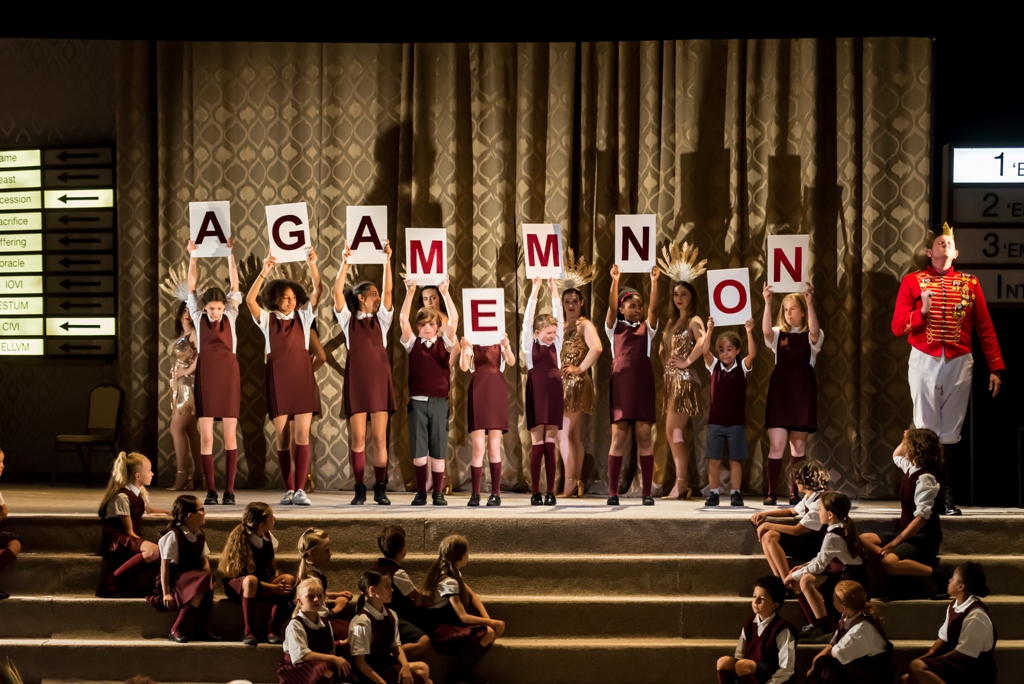 Blackheath Halls is credited with being the oldest purpose built performing arts centre in London. These days it does a great deal of work in the local community, trying to get as many as possible involved in the Arts. Hence Blackheath Halls Opera, which uses some professional singers in main roles, students from Trinity Laban Conservatoire in secondary roles, amateur, mostly non-trained, voices for the chorus, plus groups of young people from local schools.

In fact the director, James Hurley, and the Musical Director, Christopher Stark, visited almost every local school giving workshops on opera and Offenbach, leading to students from all those schools applying to be in the production. In total the cast for La belle Hélène numbered well over one hundred. The orchestra of 40 players was also amateur. In fact this was a real community production.

If this sounds like a recipe for disaster, read on! 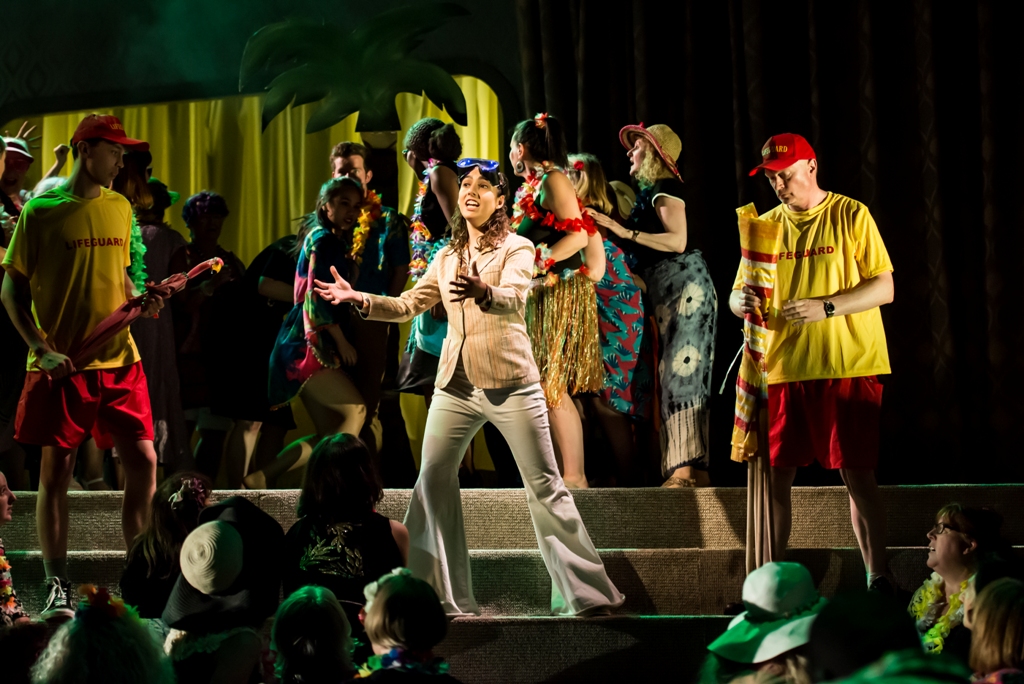 The Great Hall at Blackheath posses a shallow, high stage, which runs the entire width of the hall. In order to accommodate the huge cast, the director, and imaginative designer (April Dalton) decided to have a giant staircase the width of the stage leading down to the floor of the hall. The orchestra was on the floor to the left, another acting area to the right. This worked very well, but must have been a nightmare to the MD, who had singers scattered over a large area. In practice orchestra and singers were always at one: praise here for the excellent orchestra, the woodwind especially sounding ‘perky’ and all playing very stylishly, never playing so loud that the singing was inaudible: not easy for amateur players. Those living, for example, in Germany, where many young people learn to play instruments to a high standard, may not understand my remarks: when I started teaching in 1971, all pupils had the opportunity to have free music tuition on an instrument, and even borrow instruments free of charge. In 2019, many schools in the UK no longer teach music at all! 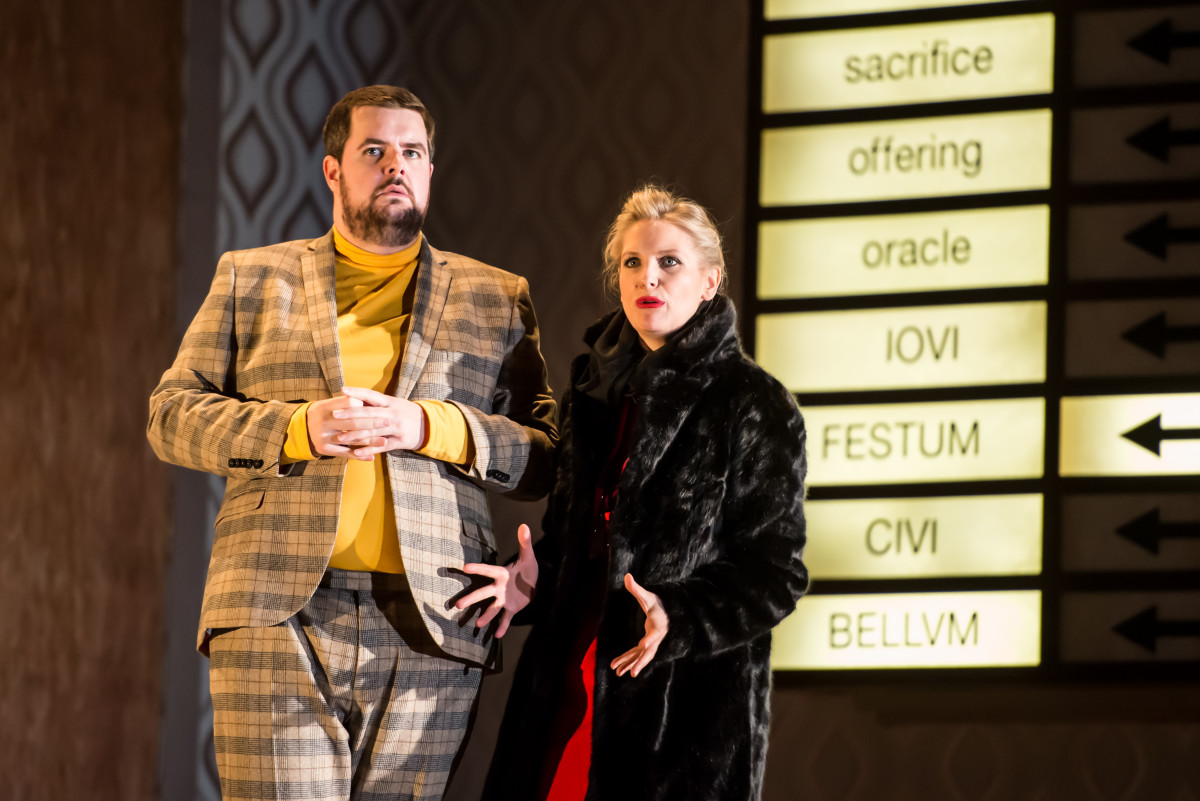 The director of this de Mille epic, clearly understood the style needed for Offenbach. As the German philosopher Walter Benjamin said (he is quoted in the extensive programme notes) “operetta transforms stupidity through music … Nonsense is true, stupidity beautiful, weakness good. This is Offenbach’s secret.”

James Hurley succeeded totally in getting the whole ensemble to appreciate, act and sing in the style required. Often in these reports I complain about directors not knowing what to do with the chorus! Not in this production! All were treated as individuals. All were acting in role all the time. Credit here must also be given to the movement director, Natasha Harrison, who obviously played to people’s strengths as to what they could do movement wise – the results often being very amusing, such as the older lady refusing to move  a chair and eventually flouncing off in high dudgeon. Great attention to detail!

The principal singer actors had been cleverly chosen because all understood the necessary style for Offenbach. 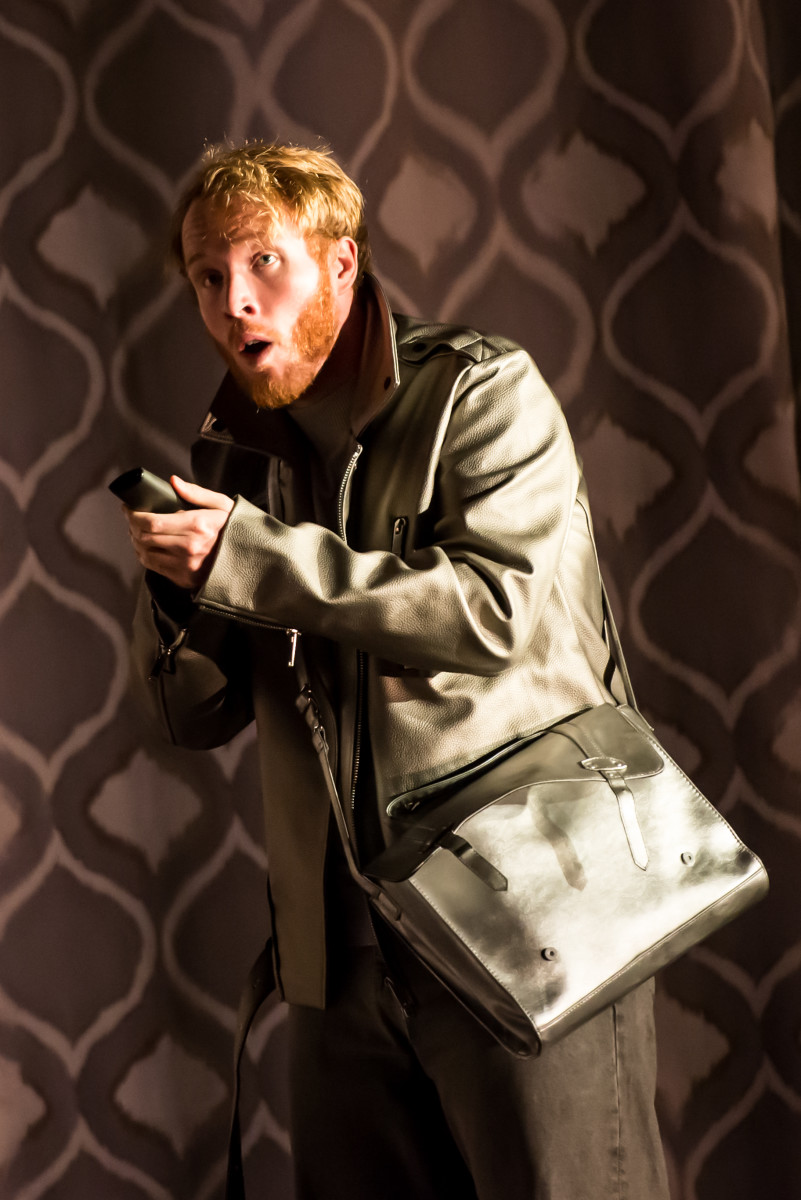 Oliver Johnston as Paris brought back memories of the Sadler’s Wells production as both his acting and singing reminded one of Kevin Miller, especially in his yodelling song in Act 3. He had a real gift of humour and was totally watchable.

Ben McAteer used his low baritone voice to great effect as the high priest Calchas and had a commanding stage presence. Joseph Shovelton, steeped in the British operetta tradition, especially with Gilbert and Sullivan, brought great humour and character to the role of the hapless Menelaus, reminding one of Peter Renz at Komische Oper Berlin.

Nicholas Merryweather as Agamemnon ensured that Act 3’s Patriotic Trio was as amusing as it should be.

Ellie Laugharne (Helen) had just the right sense of fun needed for this role – a young soprano of whom we shall certainly hear a lot more. 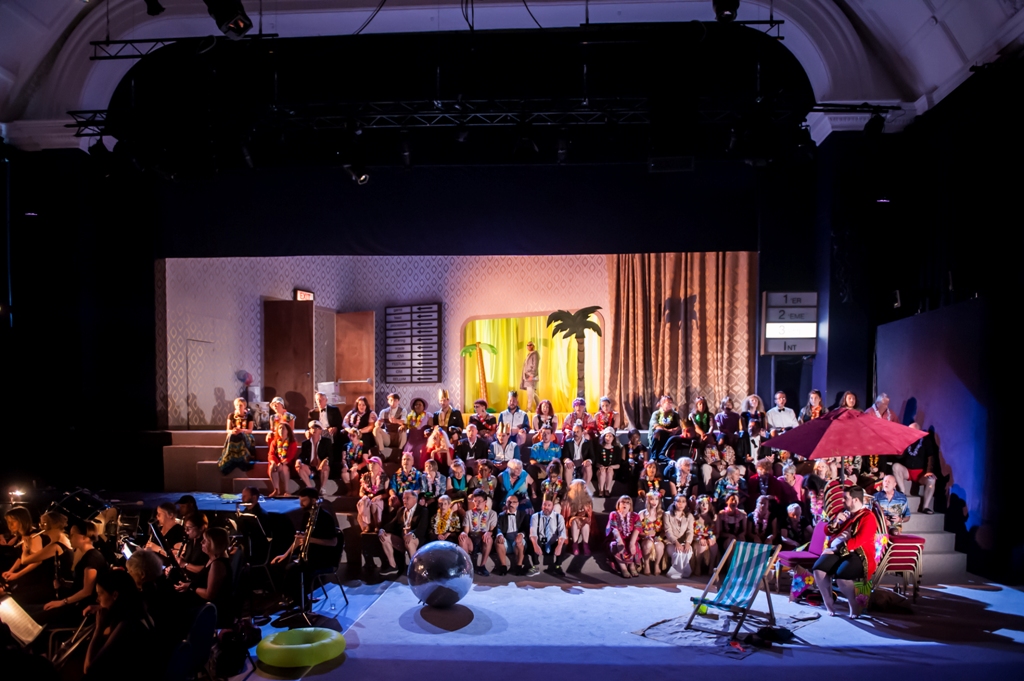 Among the students from Trinity Laban, Rachel Maby (Orestes) impressed, not only with her voice, but also with her energy in role: her opening song near the top of the show set the standard for the whole performance.

Was there anything I did not enjoy about the show? Well, the witty English translation (Jeremy Sams) did not always come over owing to the acoustics of the hall, and Ben Pickersgill’s lighting design did not always light the expressive faces on this vast stage, but overall this was a hugely enjoyable and truly wonderful evening spent in the company of Offenbach and friends. One had to make no allowances whatsoever for the fact that this was not a professional production. In fact, one hopes that there might have been scouts from English National Opera there trying to learn how French operetta can be successfully staged in England! 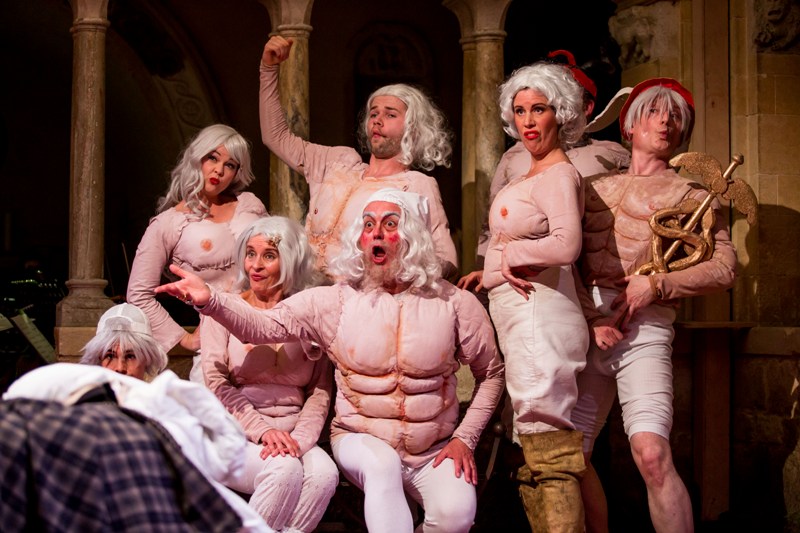 The Olympians in their travel outfits: “Orpheus in the Underworld” by Opera della Luna. (Photo: OdL)

The following day (Monday 22 July) I saw a totally different style of Offenbach performance at London’s Bloomsbury Theatre. This was Orpheus in the Underworld given by Opera della Luna, a small scale professional company that tours ‘comic opera’ to medium size venues in the UK. The company is celebrating its 25th anniversary with a revival of its 2015 production using an English version by the director and founder, Jeff Clarke.

The main differences to Blackheath were that there were only twelve performers, four of whom were dancers, excellent in the sheep ballet in Act One (inventive choreography by Jenny Arnold),  no chorus, and an orchestra of eleven (string quintet, three woodwind, two brass and percussion). In other words very similar to Offenbach’s original stagings at the Bouffes-Parisiens. 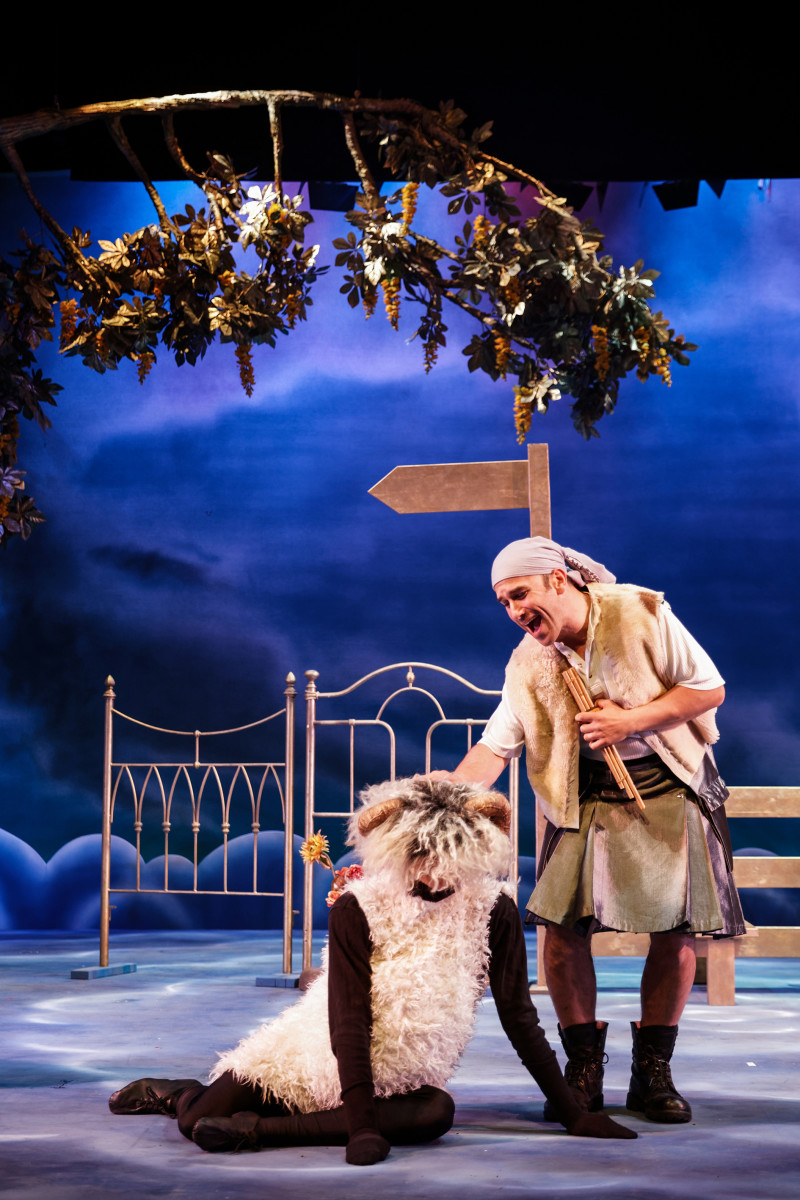 Scene from act 1 of “Orpheus in the Underworld,” production by Opera della Luna, 2019. (Photo: Craig Fuller)

Most successful at creating the necessary Offenbach style was Paul Featherstone as both an aged Mercury using a Zimmer Frame with great agility, and John Styx. He proved to be a genuine ‘singing actor’ lifting the production every time he appeared and giving it real energy and pace whenever he was on stage. His Act 3 song was an exemplar of good diction and singing ‘off the words’, as my teacher tried to drill into me! It was a shame that the 2015 satirical English lyrics about David Cameron now seem dated! Surely a revised version could have been put together for this revival?

Daire Halpin as Eurydice took time to get into role and voice, but her Act Four aria was admirable.

She was competently supported by Anthony Flaum as her lover Aristaeus/Pluto and by the remainder of the ensemble, even if Tristan Stocks (Orpheus) was clearly struggling with vocal problems and the important role of Jupiter was being ‘covered’ by Dickon Gough who needed more confidence in role.

The imaginative sets were designed by Elroy Ashmore and Maria Lancashire: the fences in the pastoral scene of Act One becoming bedsteads in the Olympian Act Two, for which very amusing ‘nude’ costumes had been designed for the Gods! Ever effective lighting was by Ian Wilson, the proscenium stage of the Bloomsbury Theatre suiting the whole production very well.

It must be very difficult for all those involved when one or two performances only are given in yet another new venue, especially for the conductor, in this case Toby Purser, who did have problems keeping orchestra and singers together, as if those on stage found it difficult to hear the orchestra buried in its pit! 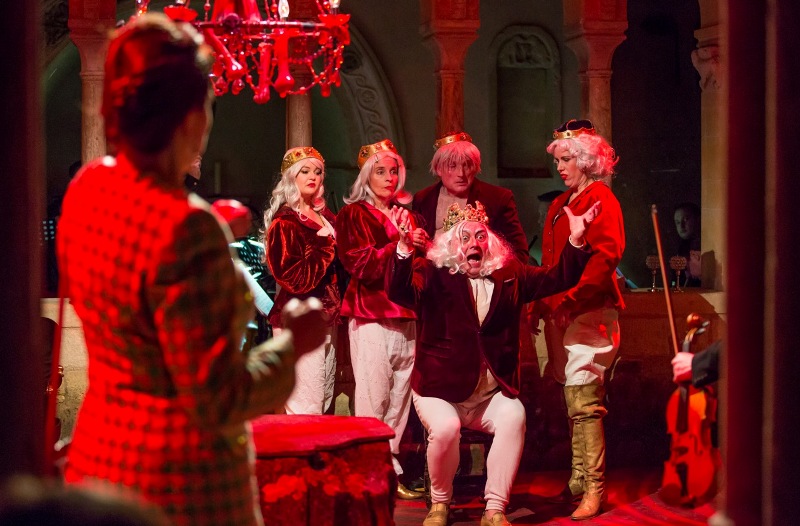 All in all, an enjoyable two evenings spent with Offenbach. What was clear was that La Belle Helene is a much stronger piece than the more popular Orpheus, musically as well as structurally. For example Act One of Orpheus needs very careful directorial handling if it is not to ‘drag’, whilst in Belle Héléne we plunge straight into sheer nonsense! Every musical number in Belle Hélène is strong and memorable whilst there are some instantly forgettable ones (from the post 1858 additions?) which perhaps could and should be shelved!

There are more Offenbach treats to come in the UK before the end of this year. Opera Northern Ireland is staging two rare one-act operettas, unfortunately only in Northern Ireland. Whilst Opera della Luna is reviving its production of La belle Hélène in November

If you enjoy Offenbach in English, the 1960s Sadler’s Wells productions of the two operettas under discussion plus La Vie Parisienne are still available on the Classics for Pleasure label, June Bronhill, Joyce Blackham, Kevin Miller, Eric Shilling etc and those wonderful Geoffrey Dunn English versions!