Offenbach’s glorious sex-and-social-conventions farce Barbe-bleue was a huge hit in Paris and Vienna back in the 1860s, when Hortense Schneider and Marie Geistinger played the raunchy farm girl Boulotte. She teaches the gruesome Knight Bluebeard that killing off your darlings after you’ve had your fun with them is not an option. At least not if you are an emancipated lady who does what she likes, and not what men (or the Catholic church) tell her to do. You can see this Henri Meilhac and Ludovic Halévy update of the old Charles Perrault tale as a forerunner of the modern feminist movement. Now, the theater in Cottbus has brought this somewhat neglected Offenbach masterpiece back to the stage in a production directed by Steffen Piontek. 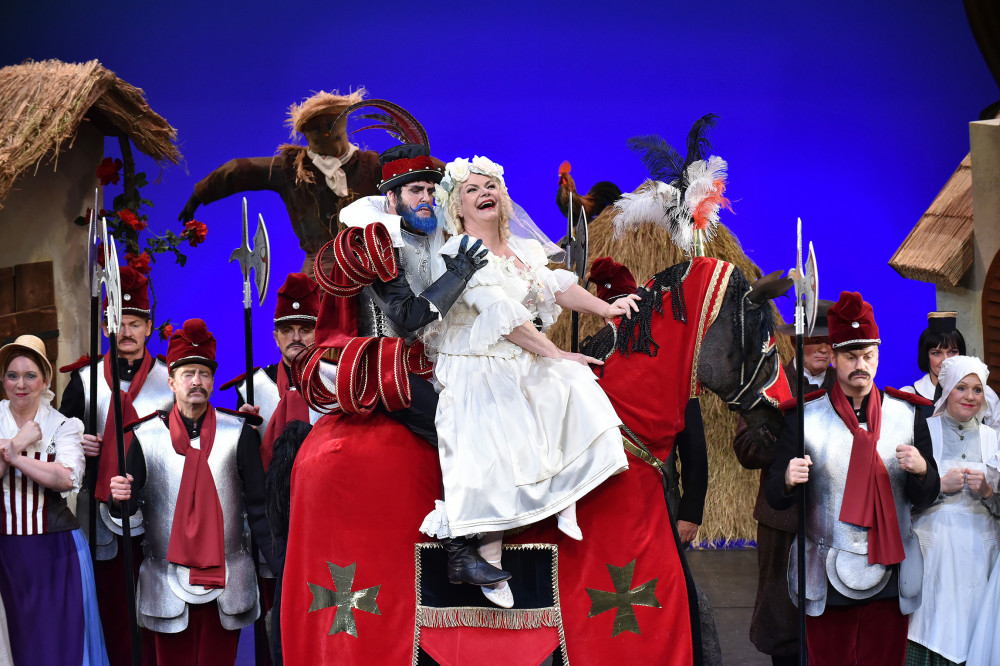 Mr. Piontek calls his staging “a joyful homage to the legendary Walter Felsenstein production at the Komische Oper Berlin” (“eine lustvolle Verbeugung”). What it actually is, is a near-identical re-staging of the famous original without ever capturing the style and spirit of the Felsenstein version which played in Berlin for decades, went on various international tours, was filmed and released on DVD, and is one of the most well-known Offenbach productions of the 20th century.

To take the highly recognizable elements from that older staging and water them down for a new staging that has nothing new to say, apart from quoting Felsenstein, is a strange experience to watch. And to witness a total lack of style in the newly created costumes by Mike Hahne and the unatmospheric light design is downright shocking. Especially when it comes to Carola Fischer as Boulotte. The statuesque Miss Fischer has been put into dresses and an ill-fitting blond curly wig that make her look laughable. This is especially sad since the production by Piontek tries to emphasize the erotic power play of the story. By conciously (?) clothing the female star in such a ludicrous way, you basically make this aspect of the story seem superfluous. I’m sure Hortense Schneider and Marie Geistinger, both praised for their breathtaking medieval costumes back in the day, would have protested; and rightly so. The photos here do not capture the live appearance well. 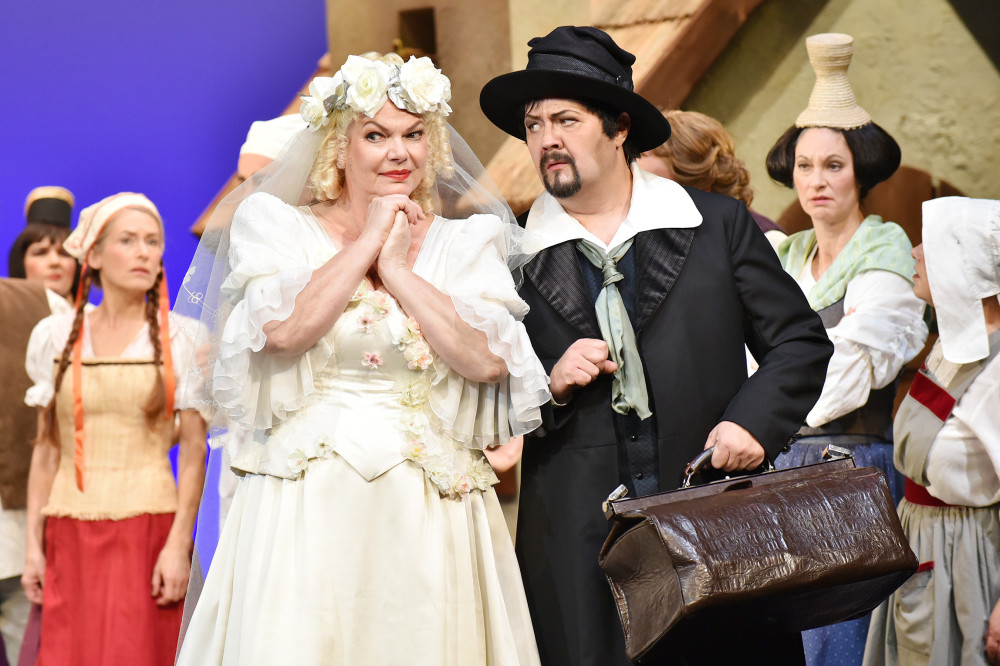 Carola Fischer in her wedding outfit in act one of “Ritter Blaubart” in Cottbus. (Photo: Marlies Kross)

Miss Fischer has been with the Cottbus company for 35 years, she sang Brangäne, Octavian and Penthesilea in Cottbus. The role of Boulotte doesn’t fit her voice well, and most importantly she lacks the ability (or desire) to shade the text, play with the words, turn this multi-facetted part into something substantial: like Dagmar Manzel does in Perlen der Cleopatra, which is also an operetta about emancipation and feminist power. Having heard Miss Manzel the night before (and Ruth Brauer-Kvam the night before that) it was almost unbearable for me to return to such an “old fashioned” singing operetta style. Especially with a voice that’s not in pristine shape anymore. Miss Fischer could have used the wear-and-tear of her vocal capacities for a more “parlando” approach; but she didn’t. Probably because the conductor, Ivo Hentschel, never coached her properly. 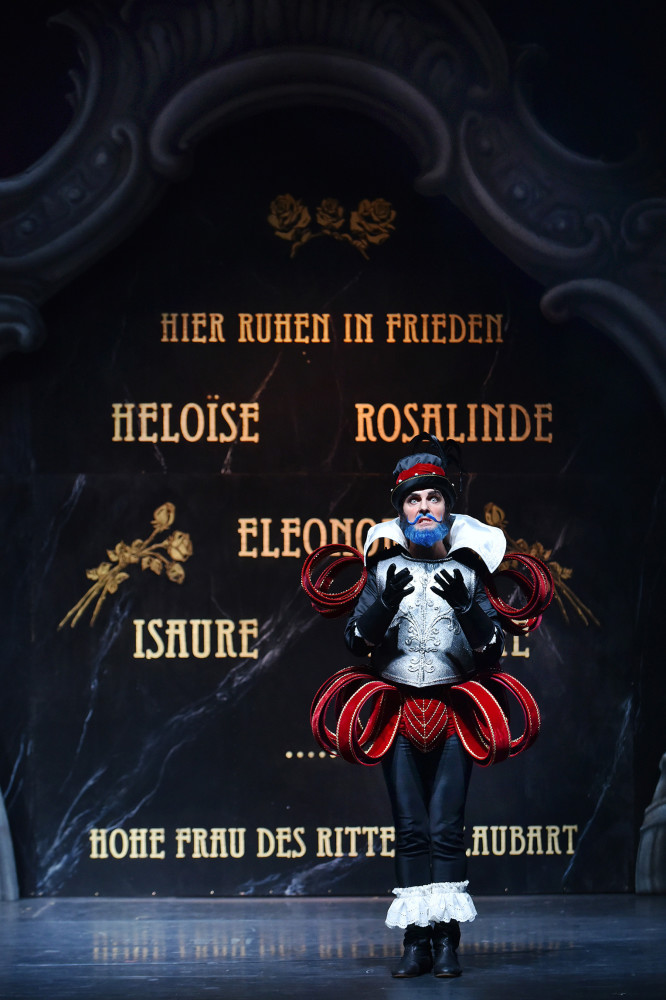 Jens Klaus Wilde standing in front of the tombs of his former wifes in “Ritter Blaubart” in Cottbus. (Photo: Marlies Kross)

Talking about the conductor: he has a large-size symphony orchestra at his disposal in Cottbus, which offers many opportunities for sonic glories, especially in the sections where Offenbach uses darker tones for the “gothic novel” aspects of this murderous tale. Yet Hentschel doesn’t waste time on musical details. He makes Offenbach sound like second-rate Lortzing, which is unforgivable.

On the plus side, there is Jens Klaus Wilde in the title role, in the exact costume Hanns Nocker wore. He manages the challenging tessitura with élan and is a sympathetic stage presence. The same is true for Heiko Walter as Count Oscar, delivering a vocally and dramatically gripping portrait of the slick head of the royal court. 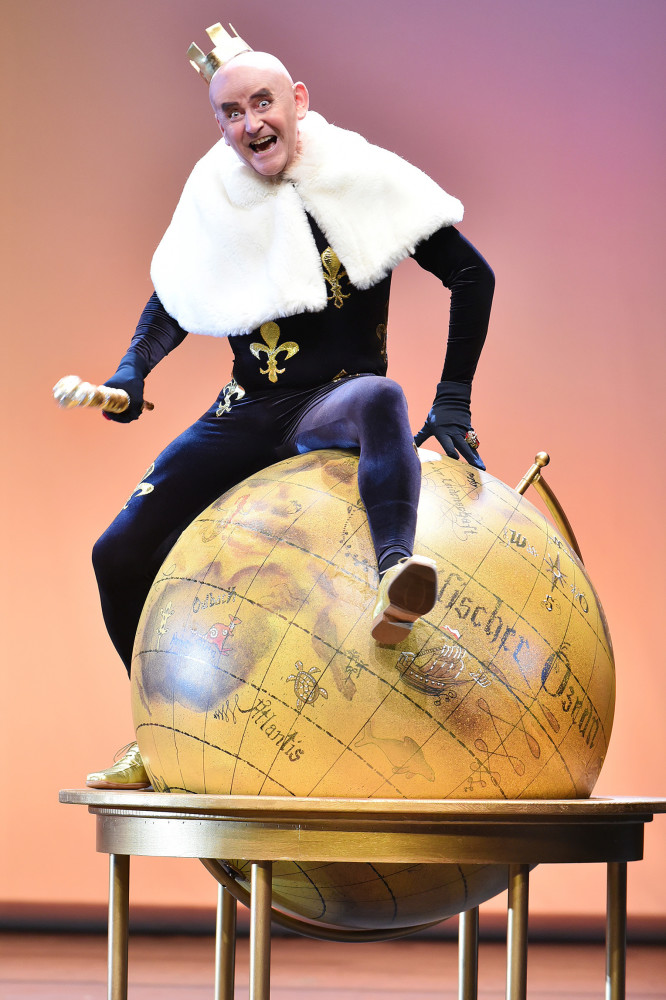 Gerd Jaburek was King Bobèche in the performance I saw, as a guest from Vienna, instead of Matthias Bleidorn from the Cottbus ensemble. He tried hard to also copy the famous gestures from the Felsenstein version, but without the famous Goebbels inflection which gave the crazed king his spooky and dangerous aura. I don’t know how Mr. Bleidorn played the part, in comparison.

Charming to look at was the young Russian soprano Liudmila Lokaichuk, who sings Gilda and Traviata the rest of the time. As Fleurette/Princess Hermia you couldn’t understand a word of what she said or sang, even though she acted with verve. At her side, there was a totally miscast – in terms of type – Dirk Kleinke as Daphnis/Prince Saphir. Putting an overweight tenor with an outrageously ugly costume and blond wig in that role makes it ununderstandable why Boulotte and Fleurette both fall for the fake shepherd, and why Boulotte upsets court etiquette by jumping on Daphnis when she meets him again at the king’s castle, overwhelming him with kisses, even though she’s Bluebeard’s bride. And the director did not use Mr. Kleinke’s interesting character appearance into something that might work in a different and convincing way in this staging. 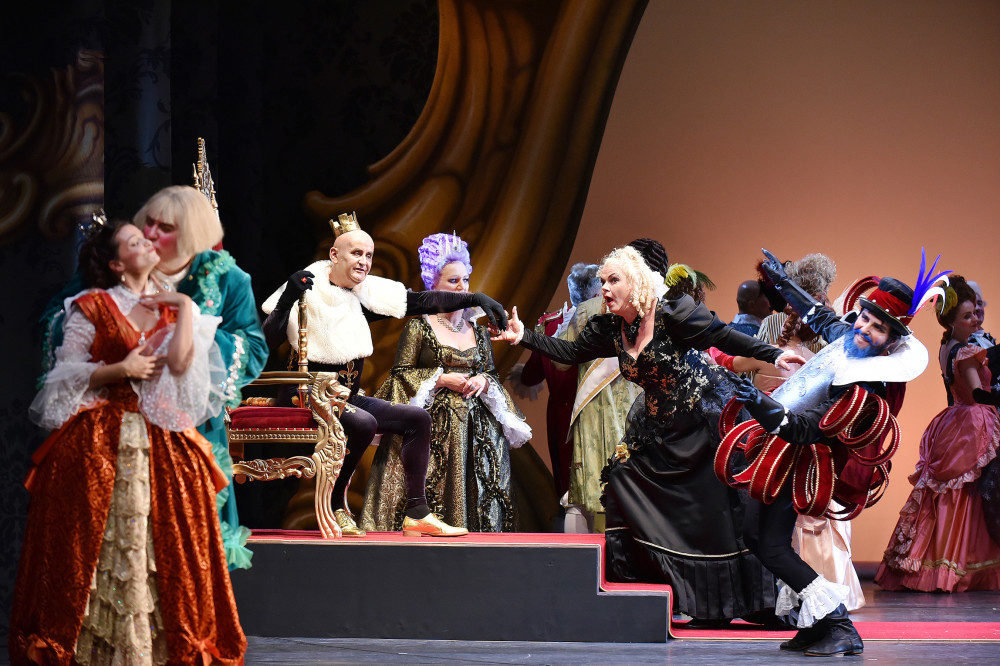 The hand kissing ceremony at court with Carola Fischer as Boulotte, in “Ritter Blaubart” in Cottbus. At front left there is Dirk Kleinke as Prince Saphir. (Photo: Marlies Kross)

I travelled to Cottbus with two friends, one from Berlin, one from New York. Because all three of us thought it might be a New Year’s treat to experience an Offenbach masterwork. And while I know the possibilities of a small theater such as Cottbus are not the same as the Komische Oper Berlin, I would have expected more imagination on the part of the director, conductor and casting director to make up for that. Because the elegant art deco theater in Cottbus is ideal for operetta. And they have, in the past, presented many great operetta production. (I saw a inventive Feuerwerk and Madame Pompadour there, with great singing actors.) But this was something else. The auditorium was more than half-empty and no one seemed to really care about what they were doing, except maybe Carola Fischer who asked the intendant of Cottbus to put this show on for her, after she had seen it, as a young girls, at the Komische Oper.

If you have minimal expectations, you could enjoy this Ritter Blaubart as a chance to actually see and hear the piece live. In a no-nonsense production with is basically a rip-off of the Felsenstein version. (Don’t his heirs have anything to say about this breach of copyright?) If you have higher expectations when it comes to Offenbach – or if you have read the informative essay in the program – you will be saddened that the artistic team were not more inspired by this tale of gender equality and deconstruction of conventional marriage morals. If you leave the theater frustrated, don’t blame it on Offenbach, please!

And if you want to hear Anny Schlemm sing her revolutionary song of female empowerment, as she rises from her grave, try this: