In the latest newsletter from the Kurt Weill Foundation, there’s a review of the new One Touch of Venus recording, issued by JAY Records (2 CDs). As an insert in the article by Jon Alan Conrad a historic 1955 film version of this Broadway operetta is presented. It sounds like a DVD any Weill and Broadway operetta fan will want to have. So we re-post the article here. 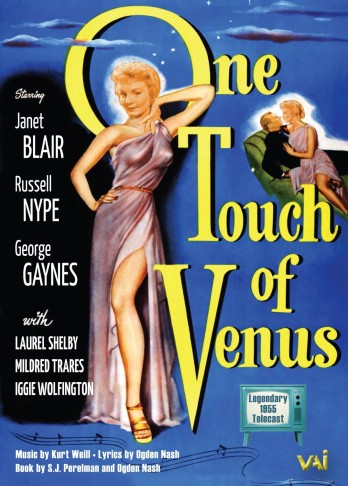 The DVD cover of the 1955 NBC broadcast of “One Touch of Venus”.

In 1955, NBC broadcast One Touch of Venus in a television adaptation derived from a successful staging of the show that summer at the Dallas State Fair. The broadcast, though cut down somewhat (running time of about 80 minutes) offers no fewer than ten songs and both ballets. Directed by George Schaefer and choreographed by Edmund Balin, the cast featured Janet Blair (Venus), Russell Nype (Rodney), and George Gaynes (Savory).

Fans of the original Broadway show will welcome this home video release. The 1948 film adaptation (Ava Gardner and Robert Walker) eliminated most of the score and substantially rewrote the script. The 1955 broadcast, now available from Video Artists International (VAI 4568) follows the original script and score much more closely. Blair makes a regal Venus, and Nype is charmingly unassuming as the humble barber who attracts the goddess.

The video, like the original broadcast, is in black and white. The DVD is playable in all regions but is in NTSC (U.S.) format. Numerous chapters make navigation easy, with a complete list given on a printed insert. The original commercials for Oldsmobile are included separately, as a bonus.