It is a grand title, for sure: The Imperial Vienna Orchestra! Yes, wow. It is as “Kakanian” as you can get. And the same is true with regard to their repertoire: Strauss, Suppé and Genée. On 28 March, they will be performing music from these gentlemen’s operettas in Norwich, all titles sung in English. Some of them are premiere performances in the UK. 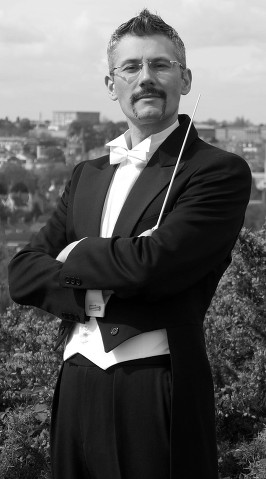 Among the goodies are: “Entrance of Fifers and Drums” and “Anna’s Song” from Richard Genée’s Nanon, the “Thousand Drums and Fifes” from Franz von Suppé’s Fatinitza, the “Flower Duettino” and “Terzett” from his Afrikareise, as well as the “Kiss Waltz” from Johann Strauss’s The Merry War.

The program is conducted by Dario Salvi from Brescia, Northern Italy (seen here with a dashing mustache!) He is the musical director of the Imperial Vienna Orchestra, but also a member of the Johann Strauss Society of Great Britain, i.e. highly familiar with this repertoire and its unique history.

The Norwich concert will be recorded, and repeated at the Sheringham Little Theatre on 28 June, 2015. Just to wet your appetite a little further: Dario Salvi is currently busy working on the reconstruction of Suppé’s 1883 operetta A Trip To Africa (Die Afrikareise), in collaboration with the Johann Strauss Society of Great Britain and the University of Wisconsin (USA). They plan to perform the entire show in 2016. Mr. Salvi’s work includes arranging the parts and scores and supplying a translation of the original German text into English. Hopefully there will be a complete recording of this Suppé rediscovery.

For further details, click here. And if you want to read more about Suppé and Die Afrikareise, try the latest expert German language biography by Hans-Dieter Roser.