It’s back again: the performance of Reynaldo Hahn’s Ciboulette, filmed at Opéra Comique in February 2013, has been re-released on DVD by Naxos. Which should ensure that the piece gets a wider circulation than before. Bringing the deliberately soigné 1923 score to the attention of a bigger international audience. 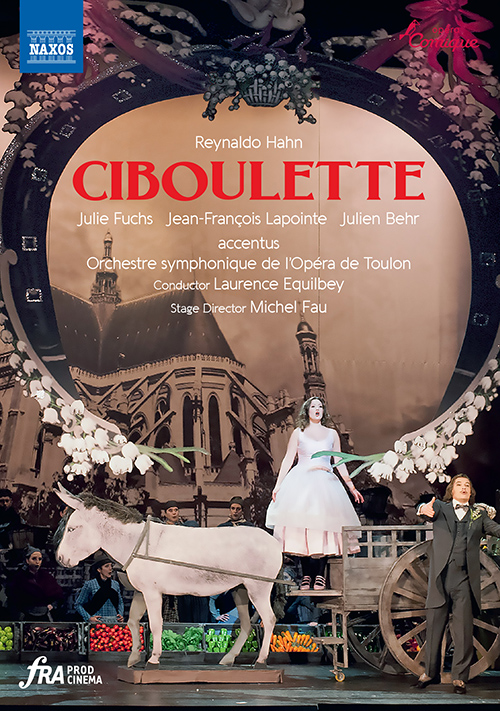 The production is from the same year when Barrie Kosky started his operetta revolution in Berlin, at Komische Oper, with Ball im Savoy. But while Mr. Kosky made a splash with breathtaking movement and nude dancing (choreography by Otto Pichler), the parallel Paris staging by Michel Fau does not utilize a dance company. Instead, the Accentus chorus (chorus master: Christophe Grapperon) is asked to “move” around as dancing waiters right at the beginning. They form a chorus line and deliver adequately coordinated kicks. But it’s no comparison to the “one singular sensation” Pichler/Kosky have now made a standard for all their Berlin operettas.

So, in a way, you could argue that this production is “old fashioned” in a pre-Kosky kind of way. It also wants to look “nostalgic” with beautiful sets by Bernard Fau and Citronelle Dufay that are consciously black-and-white (with a few restrained color highlights). This evokes the feeling of an old movie, one of those French classics, or a screwball comedy by Lubitsch.

A master like Lubitsch would have probably been ideal for this operetta about a dumb vegetable vendor who falls in love with an equally dumb Vicomte. They are perfect for each other, as the comptroller of the Les Halles markets says; his name is Rodolphe, and he’s the grown-up version of the famous Rodolfo character from La Boheme. More on that in a moment.

But before the vegetable vendor and the Vicomte can meet, the action starts in a restaurant with the demi-monde actress Zénobie. It’s a perfect scene from the Second Empire, which is made clear in the lyrics with references to Offenbach having dinner with the Duke of Morny (patron of Offenbach’s operetta enterprises and lover of his various prima donnas). Morny died in 1865, so what we see must be happening sometime before that. The Second Empire era is also evoked by the beautiful costumes of David Belugou.

Most of the singers look rather good in these outfits (even the chorus). But no one here is a great actor. Which makes the screwball comedy aspect fall flat on its face, because that requires perfect comic timing and a lot of athleticisms (think of Cary Grant in Bringing Up Baby).

These are all opera singers here and not Lubitsch material (or Cary Grant). So many scenes come across as static. And less amusing than you’d think when reading the subtitles (in French, English, German, Japanese and Korean – tells you something about where Naxos expects their buyers to be).

There is a famous moment in which Rodolphe tells Ciboulette the story of his great love affair with Mimi and how she died. For this, Mr. Fau uses a short film to illustrate the Paris of 15 years earlier, i.e. the late 1840s. And Hahn writes smolderingly melancholic music for this melodrama. But the film apart: it’s once more a very static scene, not fully brought to life by Jean-François Lapointe as Rodolphe. Just like Eva Ganizate as the actress Zénobie doesn’t fully make the sexual allure and destructiveness of her demi-monde character comprehendible. (Maybe she should read Zola’s Nana?) 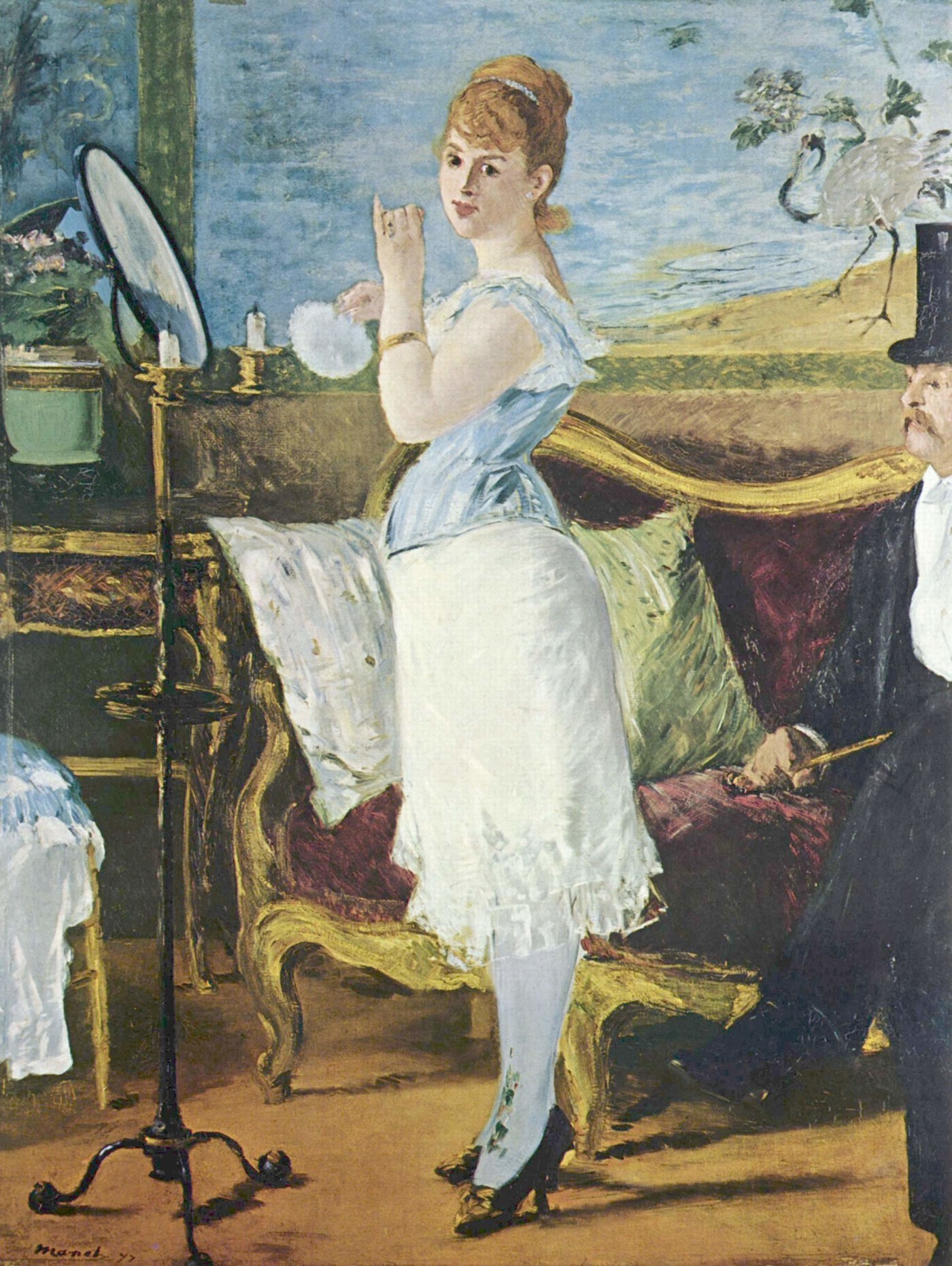 In his novel “Nana”, Emile Zola describes a “Belle Hélène” performance that is only slightly veiled as “The Blonde Venus”. Zola makes it very clear why the original diva attracted such attention, and caused such a sensation.

Further performers here are Julien Behr as Vicomte Antonin de Mourmelon and Ronan Debois as Roger, plus Jean-Claude Sarragosse and Guillemette Laurens as Monsieur and Madame Grenu. Michel Fau himself plays La Comtesse de Castiglione in drag. And Jérôme Deschamps is the Director de l’Opéra. Not to forget: Patrick Kabongo Mubenga as Auguste/Victor, the only Person of Color in the cast, singing with a ringing tenor voice. (It’s 2013, after all, and discussions of diversity don’t seem to have reached the French operetta scene.) 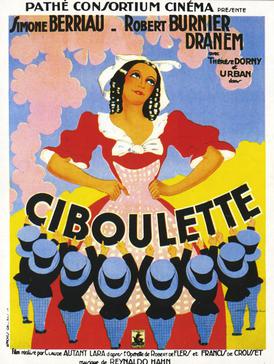 Poster for the “Ciboulette” film version, 1933.

In the pit, Laurence Equilbey conducts the Orchestre Symphonique de l’Opéra de Toulon. She brings great verve to this show but can’t help that Julie Fuchs in the title role is a sympathetic but slightly boring character. Certainly not a “dumb blonde” like Marilyn Monroe was, someone who you love dearly and feel with during her amorous adventures. When Ciboulette morphes into a famous prima donna in the last act, you don’t get a “Diamonds Are a Girls Best Friend” moment that knocks you flat, but… just more of the same with “Amour qui meurs, amour qui passes!”

But this is still a great way to get to know the piece, and the subtitles are an enormous help to understand the twists and turns of the “sophisticatedly unsophisticated” book written by Robert de Flers and Francis de Croisset. (To read more about the background of the show, click here for Kurt Gänzl’s essay.)

Hahn’s music of “rare delicacy” is as far removed from Offenbach’s La Vie Parisienne as possible, and certainly very very far from his boisterous Mesdames de la Halle. With Hahn, you don’t get raunchy market ladies played by men in drag. And there is none of the overt lusting over a young kitchen boy or a dashing soldier. Hahn’s music is deliberately non-vulgar, which – to use the words of Kurt Gänzl from his Musical Theatre on Record book – also turns it “into a pastel piece, lacking colour”. Something “for the cognoscenti”, prized “in knowledgable circles as a petit chef d’oeuvre“. 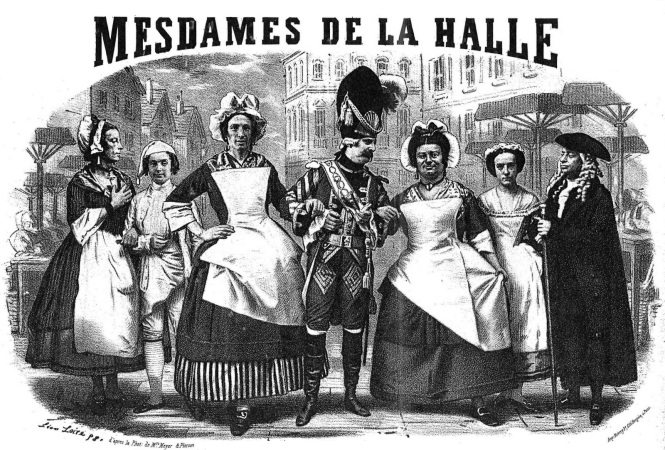 Perhaps today, Miss Equilbey would opt for a more “vulgar” approach to the score and play it with less sophistication? To give proceedings a bit of a kick, after seeing how this has worked favorably in the productions conducted by Adam Benzwi (especially with his approach to Dreigroschenoper). 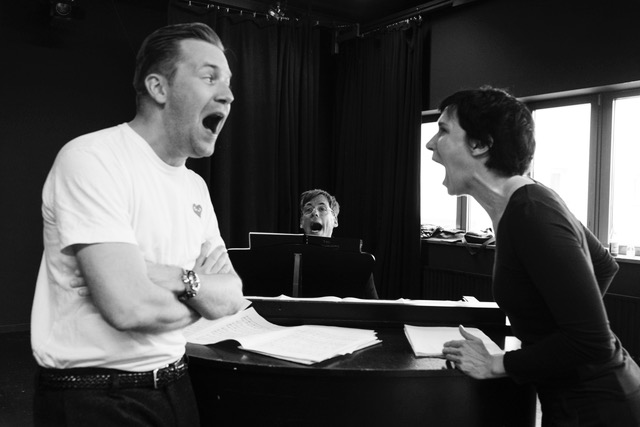 For better or for worse, this is a stylish production with stylish sets and costumes, slightly less stylish singing, and elegant music. It was realized in cooperation with Palazzetto Bru Zane who have since expanded their Reynaldo Hahn endeavors with various other projects, including a CD with all of his melodies. (For more information on the recording with baritone Tassis Christoyannis, click here.)

There has also been a recording of Hahn’s Ô mon bel inconnu (1933) recently, but not a DVD. Palazzetto Bru Zane have released the latter two projects on their own label, not via Naxos.

In a way it’s astonishing that operetta fans worldwide – including Japan and Korea – are presented with this kind of operetta production rather than with Kosky’s sexualized and (yes) “vulgar” stagings. Even though all of them have been successful in Berlin, and even though they have nearly all been filmed and streamed, neither Abraham’s Ball im Savoy, nor Oscar Straus’s Eine Frau, die weiß, was sie will or Die Perlen der Cleopatra have been released on DVD, not by Naxos nor anyone else.

And the other Berlin productions – such as Dostal’s Clivia with the glorious Geschwister Pfister or Spoliansky’s Alles Schwindel with the differently glorious Jonas Dassler and Vidina Popov – have not been brought into circulation on DVD either. All of them demonstrate how screwball comedy can work wonders in operetta today, if you have actors that keep you glued to their every move.

Here, with Ciboulette, you can sit back instead and take it all in with more emotional distance. Because Mr. Fau’s production wants to be a trip down memory lane. A reminder of the glorious past of Paris. With a little drag queen act thrown in as hint that things could be done differently …

For a review by Basia Jaworski of the original DVD, released in 2014, click here.