The Prague-born Friml studied music in his native city from a young age, and made his early career principally as a pianist, touring the world for several years as accompanist to the violinist Jan Kubelik. He had what seems to be an isolated credit as a composer for the theatre when he wrote the music for August Berger’s Tanz-Idyll Auf Japan, mounted at the Dresden Hoftheater in 1903 (7 June). 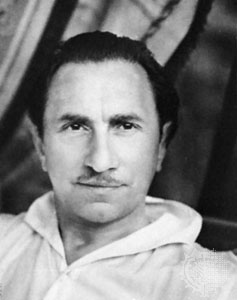 In 1904 he settled in America where he made a career as a pianist (‘wonderful technique and undoubted ability, but [he has a] tendency to appear brilliant at the expense of the music and [is] in danger of breaking the keys..’) and also as a composer of light instrumental and vocal music, winning the opportunity to write his first stage musical score when Victor Herbert refused to work for a second time with the ill-behaved Naughty Marietta prima donna, Emma Trentini. The score for Arthur Hammerstein’s production of The Firefly (1912) was allotted to Friml, and songs such as `Giannina Mia’, `Sympathy’ and `When a Maid Comes Knocking at Your Heart’, widely heard in that successful show and then outside it, immediately established his reputation. The worldwide hit of the musical farce High Jinks (1913) gave the newcomer a second successive triumph and, if the Shuberts’ production of The Ballet Girl — mounted for Trentini in Albany with its score attributed to Friml — turned into The Peasant Girl, with a score more akin to its original (Nedbal’s Polenblut), on the road to Broadway, the slighted composer was revenged when the star walked out for lust of him and closed the show.

His affair with Trentini led to a divorce from his wife of half a dozen years, during the proceedings of which it was revealed that the rising composer’s royalties ran to ‘at times $50,000′.

That figure certainly didnt shrink in the near future, for the 1915 Katinka followed High Jinks to the corners of the English-speaking theatre world, and Arthur Hammerstein got a healthy 176 Broadway performances and an Australian sale out of You’re in Love. Kitty Darlin’, a musical version of Sweet Kitty Bellairs written to suit another singing star, Alice Nielsen, who had been most recently singing in opera, did less well, but Glorianna, Catherine Chisholm Cushing’s adaptation of her own Widow by Proxy, which gave another fine soprano, Eleanor Painter only 96 performances in New York, went onto a good touring life as taken around America by Fritzi Scheff. Friml had further good Broadway runs with the musical plays Sometime (1918), in which comedian Ed Wynn was the biggest draw, and The Little Whopper (1919, 224 performances), without producing any music or individual numbers which attracted particular attention, but of a series of further such pieces — musical versions of Mary Roberts Rinehart and Avery Hopwood’s Seven Days as Tumble In (128 performances) and Charlotte Thompson’s play In Search of a Sinner as June Love (50 performances), the tale of Cinders (31 performances) and Bibi of the Boulevards, which failed to reach New York — only The Blue Kitten, a remake of the famous French farce Le Chasseur de Chez Maxim (140 performances), made any kind of impression.

When Friml switched from supplying tunes for comedy musicals back to the frankly operettic style he had employed so successfully in his pieces for Trentini, his luck changed from the just all right to the extravagantly splendid.

The film version of “Rose Marie”.

His Rose Marie (1924, `Rose Marie’, `The Indian Love Call’) became one of the great American international operetta hits not only of its time but of all time, whilst the swashbuckling saga of The Vagabond King (1925, `Only a Rose’, `Song of the Vagabonds’) gave him a second major success with a romantic musical and score.

A semi-Ruritanian piece, The Wild Rose (61 performances), and a musical version of the play The Squaw Man as The White Eagle (48 performances) were failures, and a South Seas tale called Luana failed in both America and Britain, but Friml swashbuckled to the front again with another genuine romantic piece in the form of a musical version of The Three Musketeers (`Ma Belle’). By this time, however, the composer was headquartered in Hollywood. With lyric musicals no longer the vogue, his last Broadway show, Music Hath Charms (1934), developed from what was originally intended to be a botched version of Eine Nacht in Venedig for another operatic star, Maria Jeritza, was a failure and he abandoned the theatre to do his remaining work, including film versions of Rose Marie (three between 1928 and 1954), The Vagabond King (1930 and 1956) and The Firefly (1937) for the screen.

Friml was at his best in the lyrical, Continental operetta style which he managed to wrap attractively around libretti as diverse as the comedic Katinka and the period drama The Vagabond King and of which he was one of the most successful exponents in a period where the world’s musical theatres were largely dominated by dance-and-comedy musicals and songwriters’ shows.