It would seem that cowboys are back en vogue everywhere, not just in Hollywood with blockbusters such as Django Unchained or the more recent, poetically beautiful, Slow West starring Michael Fassbender and Kodi Smit-McPhee, but also on the musical stage: Encores! in New York presented Paint Your Wagon this spring (with Keith Carradine and some gorgeous pumped up hotties), Arizona Opera gave us a fully staged production of Kalman’s Arizona Lady, after the Chicago Folks Operetta had already revived the show in the US a few years ago, just like the Komische Oper in Berlin had done for Germany last Christmas. And now there is a beautiful new CD version of Seven Brides For Seven Brothers, based on the Regent’s Park Open Air Theatre Production. 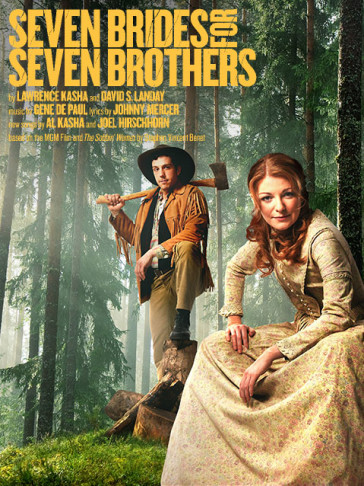 The poster for the Regent’s Park production of “Seven Brides for Seven Brothers,” which is also the cover of the cast album.

The latest Brides/Brothers cast album is remarkable for a great many reasons. With the additional songs by Al Kasha and Joel Hirchhorn, written for an earlier stage version, this love story in frontier land unfolds, sonically, in a new way because the two lead role singer come across so differently – and very modern. Laura Pitt-Pulford gives an energetic interpretation of Milly’s songs, slightly edgy, never just “sweet” and “subdued”, but with a definite feminist sting. Which is most becoming. Her “Wonderful, Wonderful Day” – a kind of copy of “Wonderful Guy” from South Pacific – is an absolute highlight, bursting with enthusiasm. Simply overwhelming.

At her side, Alex Gaumond is as equally unusual Adam. He sounds less mature and secure than, let’s say, Howard Keels in 1954. Instead, he comes across as young and a little bit immature. That makes his chauvinistic male arrogance (“all women are the same”) a lot more tolerable and him, as a character, more likeable. The trio with his brother Gideon, “Love Never Goes Away”, is an emotionally intense high point in this recording, with Sam O’Rourke as a melancholy and beautifully restrained Gideon. And, yes, Gaumond’s big solo “A Woman Ought To Know Her Place” is as catchy and explosive as it gets. And because of his youthful stupidity, he puts the lyrics into quotationmarks automatically, at least that’s how I heard them here.

The National Symphony Orchestra, conducted by Martin Yates, performs the Irwin Kostal orchestrations dazzlingly: beautiful brass playing especially, and some haunting wood wind solos. Maybe not quite as haunting as some sections in the original film soundtrack, but there is clearly more buzz and forward moving energy in this new recording, less romantic drooling.

The singers, without exception, have bright voices that feel unforced and natural, never operatic or stilted.

Only when they put pressure on the notes, mostly at the end of songs, their voices take on a rather unattractive wobble. But it’s never intrusive, because there are not that many big belt moments. It’s a worrying phenomenon, though, that modern voices do not seem to be capable of sustaining a high note without this kind of tonal distortion. Bad voice training, I’d say. Or is it just a new style, and fashion right now? 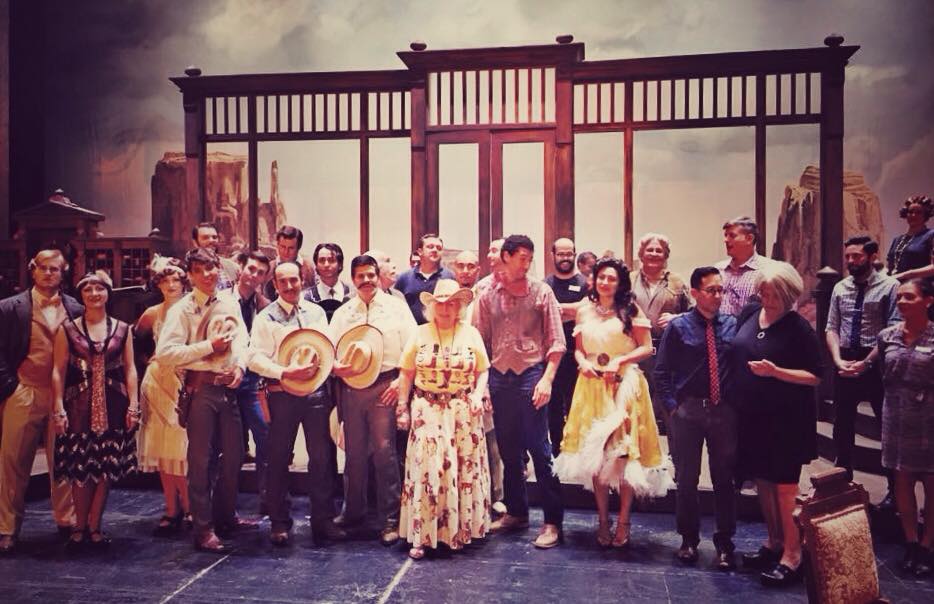 Yvonne Kalman surrounded by the cast of the Arizona Opera production of “Arizona Lady,” 2015. (Photo: Private)

The fresh sound of the orchestra, the highly sympathetic casting of all seven brothers and their respective brides, is something I wish could be heard too on a new recording of cowboy operettas such as Kalman’s Arizona Lady. Or, for that matter, any new operetta recording. So if anyone wants to hire Laura Pitt-Pulford and Alex Gaumond for an operetta outing, after listening to these Brides/Brothers, that would be a great idea.

Till then, this cast album from England is a joy from start to finish. I only wish there were a DVD too, because the famous “Barn Dance” does need visuals; possibly inspired by the breathtaking beauty of John Maclean’s Slow West?