This opulent revival of Rodgers and Hammerstein’s enduring 1951 classic certainly has much to commend it. For starters, theatergoers have come to expect the collaboration of star Kelli O’Hara and director Bartlett Sher to guarantee a special experience, and indeed they won’t be disappointed. 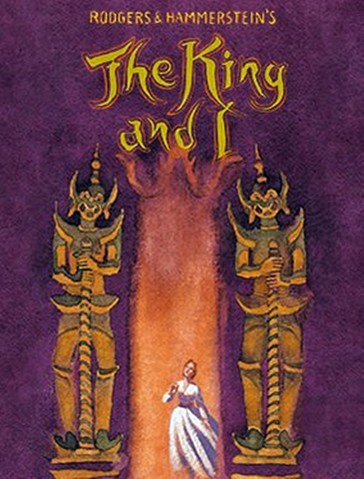 Poster for the 2015 production of “The King and I” on Broadway.

Their last R&H outing – also at the Beaumont – was the splendid South Pacific. Still, for all its excellence, The King and I doesn’t quite scale the same magical heights, and for all Sher and his team’s attempts to rethink the show from top to bottom, I can’t say it surpasses other productions I’ve encountered over the years, including the last Broadway revival (1999) with Donna Murphy and Lou Diamond Phillips.

O’Hara looks wonderful with her red wig and Victorian gowns, sings beautifully, employs a convincing English accent (after her Italian housewife in Bridges of Madison County, I think she’s become the Meryl Streep of Broadway musicals), and acts intelligently, but for all of that, I found her performance a little soft-grained and lacking in dynamism.

The great Japanese actor Ken Watanabe was a clever, out-of-the-box choice for the king, but as early reports indicated, his command of English proves shaky, and much of his delivery of the familiar dialogue is unintelligible or nearly so. Besides Phillips, non-Yul Brynner Kings of my experience have included Darren McGavin, Michael Kermoyan, Jason Lee, and even Rudolf Nureyev, and they’ve all been quite satisfying. There’s no denying that Watanabe is a commanding stage presence, his acting choices never less than interesting. The language issue, though, is a detriment.

Ruthie Ann Miles, so wonderful in the Imelda Marcos musical, Here Lies Love, plays head wife, Lady Thiang, with great sensitivity. She projects the requisite dignity, and her big moment, “Something Wonderful,” earns a deservedly strong ovation. So, too, Ashley Park’s slave girl Tuptim, is terrific both dramatically and musically. Paul Nakauchi as the Kralahome is also excellent.

Christopher Gatelli’s choreography honors the Jerome Robbins’ original, with “The Small House of Uncle Thomas” ballet a gorgeous highpoint, as ever.

That number works particularly well on the large Beaumont thrust stage, but I felt that elsewhere, the vastness of the playing area somewhat diffuses the show’s impact, even though Sher blocks most of the action downstage. The opening scene – the approach of Captain Orton’s (Michael Guyer) ship as it brings Anna and her son (Jake Lucas) to Bangkok as the stage slides over the large orchestra pit – is pretty thrilling, and certainly brings the action close.

And when Anna and the King cut loose with “Shall We Dance?” the Beaumont stage affords them as much space as Deborah Kerr and Yul Brynner had in the film.