Deep among the indelible memories of my theatergoing life are singer Lynnie Godfrey sprawled on a piano suggestively growling “Daddy” and later, Gregory Hines shuffling onto the stage forlornly singing the plaintive “Low Down Blues” ultimately gorgeously merging with sweet-voiced Ethel Beatty who had just sung her own song about loneliness. The show was 1978’s Eubie! a fabulous tribute to composer Eubie Blake, then still very much alive and making the rounds of all the talk shows at the time, as he rode a new wave of fame. 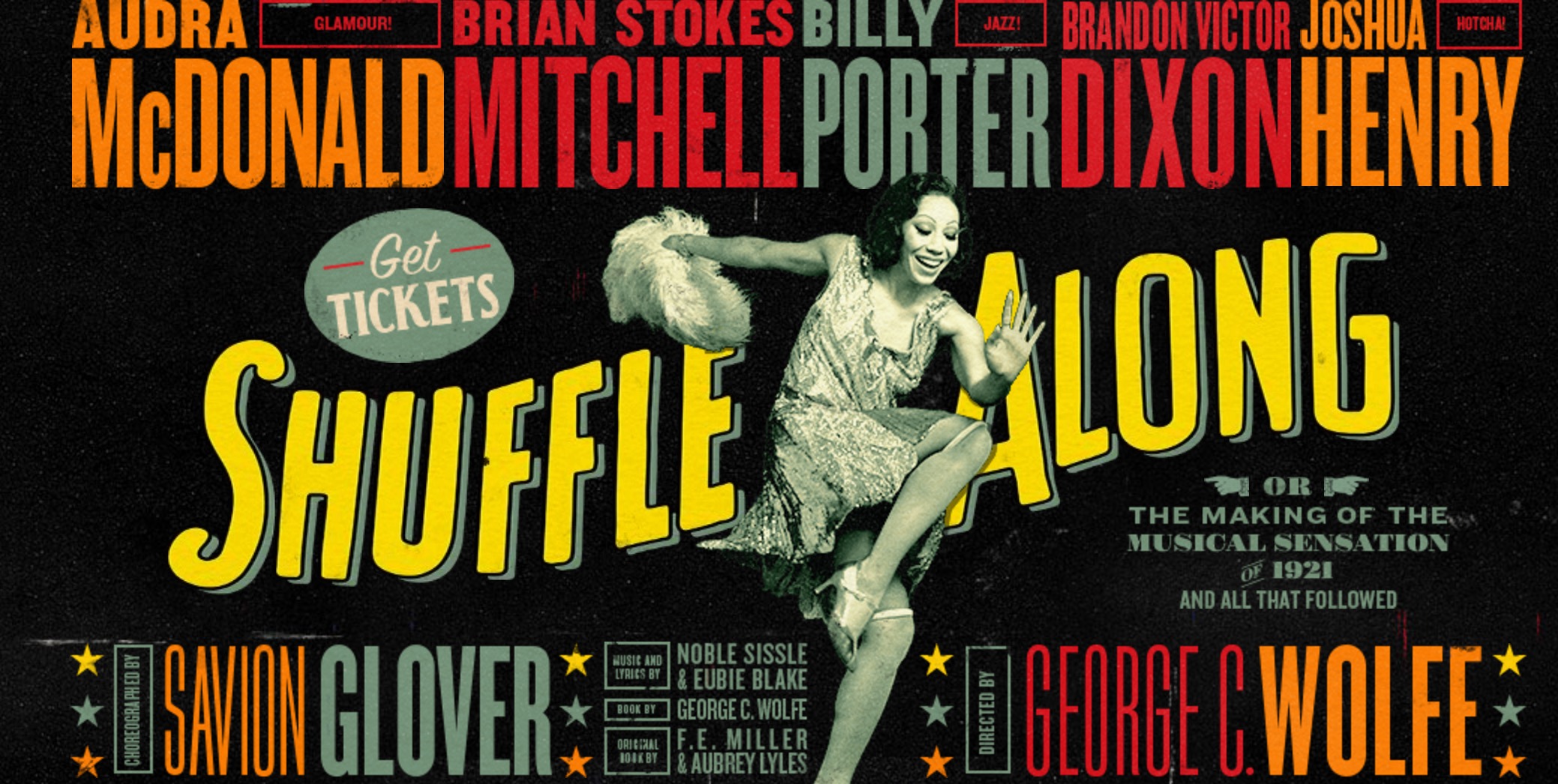 The 2016 poster for the revival of “Shuffle Along.”

Both those numbers surface again in Shuffle Along, which takes its title from the groundbreaking 1921 show written by Blake and his partner Noble Sissle, with book by F.E. Miller and Aubrey Lyles. But the new Shuffle Along is, as the subtitle states, “The Making of the Musical Sensation of 1921 and All That Followed,” not an actual revival of the original show.
Thus, we have, as in so many musical films of yesteryear, a behind-the-scenes story about putting on a show – one with an all-black cast — against all odds. In tone, it struck me very like the 1999 film Cradle Will Rock about the challenging original production of Marc Blitzstein’s opera.

A great cast has been assembled here: Brian Stokes Mitchell (as handsome a leading man as ever) is Miller; Billy Porter is Lyles; Joshua Henry is Sissle; and Brandon Victor Dixon is Blake. And then there’s Audra McDonald as star Lottie Gee who falls into a long-term romance with the married Blake who simply won’t leave his wife (whom we never actually see). Any concerns that playing Billie Holiday might have damaged McDonald’s lustrous sopranos are squarely laid to rest by her high flying tones here.

Savion Glover has created some quite sensational choreography, involving the entire cast including the creators just mentioned all of whom were, in fact, also in the show.

Decked out in Ann Roth’s eye-filling costumes and performing on Santo Loquasto’s stunning art deco sets, the show is quite the visual feast.

Music supervisor Daryl Waters has done the snazzy arrangements and orchestrations, and they sound splendid. The aforementioned Eubie! songs come up sounding very different on this occasion; not better, but different. McDonald, using her legit voice, does a most delightfully provocative “Daddy” minus Godfrey’s pelvic thrusts and growling vocals and Porter offers a powerfully vocalized “Low Down Blues” unlike Hines’ relatively understated version. All these approaches seem valid, and in terms of authenticity, McDonald’s version does, in fact, sound closer to original Shuffle star Gertrude Saunders recording.

George C. Wolfe has directed with his usual craft and and imagination, but I’m sorry to report that it’s his own book that ultimately lets the show down, not fatally, I hasten to add, for this still a marvelous, must-see show. But I couldn’t help wishing that, like Eubie!, it had simply presented the songs in revue style.

Annoyingly, the songs are not listed in the program, and indeed some are only heard in fragments. Sometimes the fragment gives way to a full production number; other times not. If they record a CD – which I surely hope they do – it will require some fancy rearranging of the score.

The first act leads up to the New York opening – not truly on Broadway but at the 63rd Street Music Hall situated between Broadway and Central Park West. The second act – rumored to be a letdown after the first – actually sustains the entertainment value, albeit with a less certain dramatic arc, dramatizing, as it does, the unfortunate rift between Blake and Sissle and Lyles and Miller, and then offering verbal postscripts to what happened to the characters and when they died. The latter is done in a sardonic, cheerful manner, but it’s an obvious downer.

Some scenes are just head-scratchers as, for instance when Lottie, as the temperamental star, takes the young Florence Mills (Adrienne Warren who also plays Saunders) under wing as the latter begins to tentatively warble “I’ve Craving That Kind of Love,” but the expected knock-em-dead moment where Mills proves she doesn’t need Lottie’s coaching doesn’t quite happen. Instead, Mills continues singing, while Lottie just skulks around the periphery of the stage.

For all its faults, Shuffle Along is second to none for pure, entertainment pleasure.