The operetta fashioned by Robert Wright and George Forrest from the melodies of Norwegian composer Edvard Grieg – hugely popular in the 1940s, and for quite a while thereafter – has always seemed far more old-fashioned than the team’s jazzy reworking of Borodin in Kismet several years later. 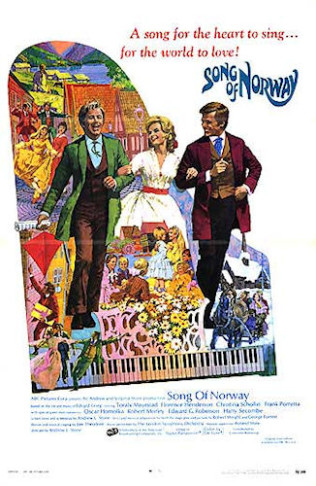 The 1970 theatrical poster of the “Song of Norway” movie version. (Photo: Wikipedia)

The book by Milton Lazarus – a highly fictionalized biography – is no great shakes (as critics noted from the start), and some of the lyrics, though never less than proficient, are excessively florid. But once the music gets going full throttle, the effect is quite rapturous. Conductor Ted Sperling led the American Symphony Orchestra in a performance that vocally and musically made for a bountiful earful. The Collegiate Chorale, for their part, sounded heavenly.

In this telling, Grieg is pals with writer Rikard Nordraak (in real life, a composer himself) and local girl Nina Hagerup, but let’s his head be turned by visiting Italian diva Louisa Giovanni who hires him as her accompanist, with thinly veiled romantic designs despite her married status. 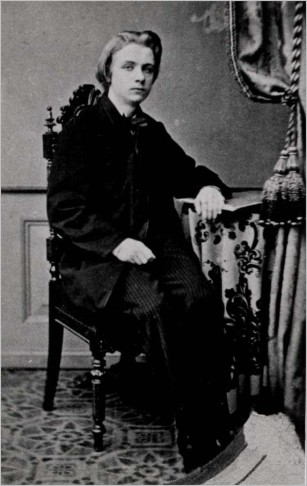 The young Edvard Grieg, in 1858. Photographed by Selmer.

The plot is, in fact, vaguely reminiscent of that fashioned by Oscar Hammerstein II for Kern’s Music in the Air the previous decade: sophisticated diva sets her cap on a promising young composer from a “purer” rural environment, and brings him to the big city (here, Copenhagen and elsewhere) until he realizes the error of his ways and returns to the “true” values and simple girl back home.

The ever-versatile Santino Fontana, having a night off from his Tony-nominated Prince role in “Cinderella,” sang strongly in the baritone role of Grieg, opposite Alexandra Sibley purely vocalized Nina. I’d love to hear her in any number of other operettas. And Jason Danieley confirmed his standing as probably the best Broadway tenor around kicking the evening off impressively with a stirring “Legend.”

In light of her friendship and past professional association with Wright and Forrest, it was wonderfully fitting to have Judy Kaye take the role of Louisa. She nailed the diva role to a tee, and vocally, was in excellent, latter-day form. 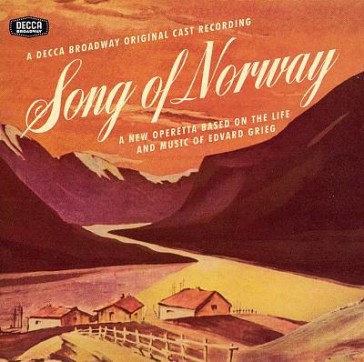 The cover of the original Broaday cast album.

David Garrison as her husband Count Peppi LeLoup handled his “Bon Vivant” (the most musical comedy sounding number in the score) with skill. And it was lovely, too, to have veterans Walter Charles and Anita Gillette (replacing Marni Nixon) as Grieg’s parent.

Jim Dale narrated Roger Rees’ script amusingly, playing a variety of parts with his customary aplomb. An abridged version of the book was used (thankfully), but what was there was exceptionally well played. Comparing these performances to the arch line readings of the Decca original cast recording, one can appreciate how skillfully this crew handled the same material.

As George Balanchine’s dances were such an integral part of the original show, it was fitting that there would be some dancing here, and six performers (Abi Stafford, Sarah Atkins, Abigail Simon, Kelsey Coventry, Ezra Hurwitz, and Amir Yogev) gave spirited performances, neatly choreographed by Tom Gold.