Yesterday I went to Altenburg. I know, even my German friends say ‘where?’. Well, it’s a lovely town in Thüringen, ex-DDR, not far from Leipzig, which apparently suffered hideously in those communistical years, but has now been quite beautifully restored. It has a castle, a brand-new (old) art gallery and museum, a delicious town square with Rathaus and pointy churches and, on top of that, yesterday was Festival Day. 200 years since playing cards and the game of Skat were invented: right there! 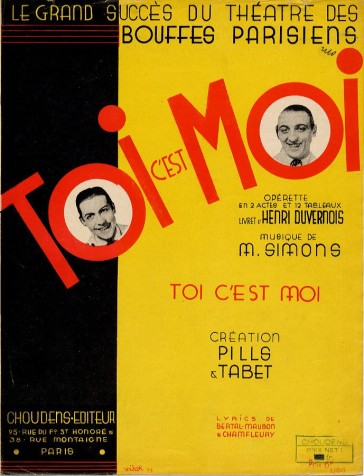 The poster for the original Paris “Toi c’est moi”.

But Kevin, Manuel, Frank and I hadn’t come from Berlin for a game of bridge. We’d come for another feature of this charming town: its theatre. Which is charming too. A perfect medium-sized auditorium, just right for musical comedy, and guess what: that’s what was playing.

We were there for a Deutsche Erstaufführung of a French musical comedy. Not a new one: Toi c’est moi was written some eighty years ago. And, what is more, it was written especially as a star vehicle for a hugely popular pair of performers. And it was duly successful as such. It was less successful when exported without MM Pills and Tabet, to England and to Hungary, but it did not reach Germany.

Quite what provoked a provincial theatre in Thüringen to choose – from the hundreds of dazzling French musical comedies of the tween-wars years – to produce this one is beyond me. I can think of only two reasons. Moises Simon, the composer of the ditties that make up the score, was Cuban. His claim to fame is having written ‘The Peanut Vendor’. So there was a little Hollywood-South-American-Way flavour to some of the pieces. But someone, in more recent times (2005), reproduced the show in France, which led to someone else doing the same, which led to a recording .. and so, Toi c’est moi lived again, and became Du bist ich at Altenburg. 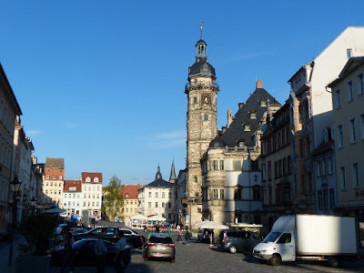 The picturesque town of Altenburg.

This musical comedy is a perfectly pleasant piece. A thoroughly jolly way to spend an evening. A genuine Musical Comedy. Light comedy with a mass of songs. The comedy is slim, and really exists only to link the songs – especially in its German version, which seems to have lost some bits I remember from the French – but it’s merry, rib-tickling and enjoyable. The audience bubbled.

The music could be described in the same way. Lilting dance tunes with many a comical and nearly romantic twist.

Always tuneful, always attractive … and in the rather over-orchestrated rearrangement here, much more Parisian dance-hall than South American.

Toi c’est moi has every right to be revived. Its good, tuneful fun. And if I can think of a few dozen of the same type that I’d have chosen before it (like, anything comical by Willemetz plus Christiné or Yvain), that’s just my personal preference.

I must say that Altenburg gave the little piece a splendid production. The direction had a simple flair, which let the comedians (that’s the whole cast!) have their fling, and the show ran on well-oiled wheels. I found, as I said, the orchestra too numerous and Guy Lombardo, but they did their job with a will. Blame the arranger not the band. The dancing had some superbly funny and cheerful moments (let’s not forget that the cast are the regular company of the theatre!), but gave me my one slightly sour moment of the night. I know. Provincial houses have a ballet on the payroll, so they get shoved into everything. But NOT doing entrechats in a 1930s rumba-conga-samba musical! They were better in the second half when they took the mickey out of themselves.

The visual design was right in the spirit of things too. By and large the ‘feeling’ of the whole show was right. I won’t say we could have been back in Paris in the ‘30s, but sufficiently so.

Erik Slik (Bob) and Alexander Voigt (Pat) had the job of taking on the star roles that originally held the show together and were its raison d’être, and both did a good job, singing, dancing and fooling with glee. Bob is by far the better part (Pat becomes a cipher in the second half), but the two men made a lively and strongly-singing team, and delivered the show’s title song – and a lot of others — rousingly and amusingly. 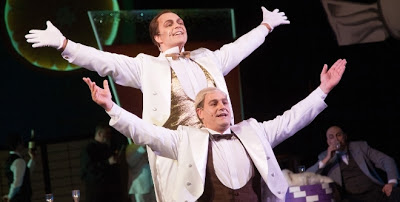 The male leads of the Altenburg production.

Kai Wefer took the René Koval role of Pedro, and made it grotesquely funny, though if you put in all your best tricks in Act 1 you’ve got to find different ones for Act 2. Pedro gets the show’s hit song, ‘Sous les palétuviers’, and he and the robust Aunt Honorine (Bettina Denner-Brückner) gave it its comical and musical due.

The men might have been the stars of the original show, but Simone Simon and Lyne Clevers, as the juvenile women, got a large share of the singing, and in this production the roles of Maricousa (the sweet one) and Viviane (the vampy one) were cast to the hilt. Katie Bolding as Maricousa was a 92 carat gold winner. I don’t suppose the music of this role has ever been sung so fluently and just plain beautifully. My jaw hit the floor ten seconds into her first song, and stayed there. Miss Bolding would grace any stage. And I would like to be there!

Chrysanthi Spitadi vamped gallantly as Viviane (who does nothing else but vamp!) and delivered her numbers in an energetic warm mezzo which was truly pleasant to listen to.

So, all in all, a really pleasant evening. Not an earth-shaking one (as musicals nowadays strive too often to be), but one of merriment and music, from the days when the words Musical Comedy really meant what they said.