In December 1944, composer Leonard Bernstein, choreographer Jerome Robbins, and librettists Betty Comden and Adolph Green all made their Broadway debuts under the guidance of veteran director George Abbott with the musical comedy smash On the Town. All four became giants in American musical theatre, with Robbins a titanic talent at the New York City Ballet, and Bernstein a genius conductor at the New York Philharmonic. Surprisingly, their first collaboration On the Town, though much loved and admired, has never since repeated its initial critical adulation and popular success. Until now! The magic of On the Town has inexplicably been recreated by director John Rando, choreographer Joshua Bergasse, and a blissfully perfect cast. 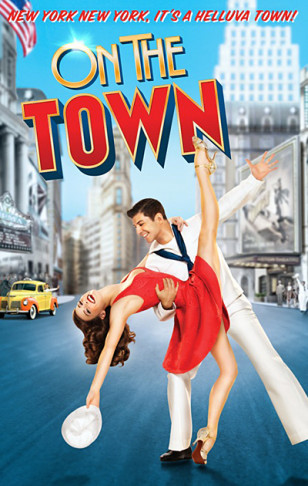 Poster for the 2014 “On the Town” production on Broadway. (Photo: On the Town/PR)

Very simply, On the Town tells the simple story of three sailors on twenty-four hour shore leave in New York City for the first time in 1944. If its 1949 MGM film junked much of Bernstein’s score, the Off-Broadway revival of 1959 and London premiere in 1963 were faulted for the lack of Robbins’ distinctive choreography. The Broadway revivals of 1971 and 1998 (seen by this critic) were ill-conceived and miscast; but the English National Opera 2007 production and NYC’s Encores concert staging in 2008 suggested On the Town just might work. Credit for this unlikely success must be shared equally by John Rando as director and choreographer Joshua Bergasse. Rando approached the original text with great respect for its brash humor and wide-eyed wonder, its startling optimism in the darkest days of World War II, and a keen sense for the sexual desperation and emotional hunger of its principal characters.

Where previous productions have descended into shrill cartoon, Rando captures the insouciant mischief and fun that propels three couples through madcap adventures and misunderstandings.

Credit John Rando for having selected a talented young cast, few of them well-known. Tony Yazbeck is the romantic Gabey, in search of the perfect Miss Turnstiles (Megan Fairchild), whose face he sees on a subway poster. A distinctive solo dancer and charming singer, Yazbeck holds the huge Lyric stage in the palm of his hand with his solo ‘Lonely Town,’ its Pas de Deux, ‘Lucky to be Me,’ and Act 2 ballet. Jay Armstrong Johnson is the gullible hayseed Chip, overwhelmed by the aggressive designs of female taxi driver Hildy (Alysha Umphress) in their duet ‘Come Up to My Place.’ Clyde Alves plays the typically over-confident alpha male, Ozzie, who stumbles across the repressed anthropologist Claire (Elizabeth Stanley) in the Museum of Natural History, where they get ‘Carried Away.’ 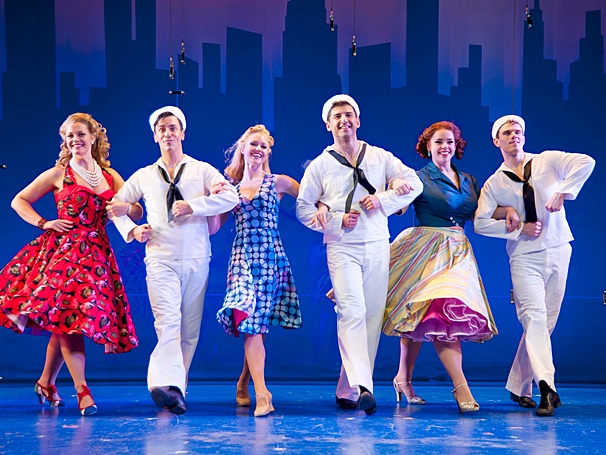 Trusting to the emotional honesty of the characters yields a great comic benefit, as the audience falls in love with them and their foolishness. The supporting cast offers multiple cameos, be it Jackie Hoffman’s little old lady, Stephen DeRosa’s sleazy emcees, Allison Guinn’s sniveling Lucy Schmeeler, or Michael Rupert’s hapless Pitkin, suitor to Claire. Director Rando and scenic/projection designer Beowulf Borrit have many visual tricks up their sleeves, as simple as a brick wall for a view, a hair-raising taxi ride through Manhattan, or the cinematic dissolves of one crazed night club after another.

Two more savvy choices: (1) inviting the audience to stand for the ‘Star Spangled Banner’ national anthem before the show starts, (2) honoring a 94-year old war veteran in the audience with a spotlight and bow during the Act 2 club sequence.

Perhaps even more astonishing is Joshua Bergasse’s breathtaking choreography throughout, which is at once both an homage to Jerome Robbins’ original, yet strikingly athletic and original for the 21st century. On the Town is a dance musical in constant motion, and Bergasse capably fills the stage with a virtuoso team of dance athletes in visual tableaux, be it the Times Square Ballet that closes Act 1, the multiple Night Clubs at the top of Act 2, the Subway Ride and Imaginary Coney Island, Great Lover Sequence, and the Real Coney Island Act 2 finale. His dance vocabulary is one of classical ballet and jazz, thrills and chills, laughs out loud, cartwheels, back-flips and tender pathos. An impressive debut as choreographer, who dared to follow in the steps of Jerome Robbins.

Last but never least is the glorious Leonard Bernstein score, beautifully sung before the largest orchestra now on Broadway. James Moore conducts what sounds like the original 1944 orchestrations by Bernstein and others, though they are uncredited as such. The well-known standard ‘New York, New York’ gets a muscular workout from the three sailors and ensemble.

The tender ballads ‘Some Other Time’, ‘Lonely Town,’ and ‘Lucky to be Me’ are memorable respites from the anarchy of the story.

And the comic gems ‘Come Up to My Place,’ ‘I Can Cook Too’ and ‘Carried Away’ are expertly interpreted. The score’s jazzy dissonance, with echoes of Prokofiev, Stravinsky and dance band music of the 1940s, is thrilling to hear, rendering today’s commonplace Broadway music by comparison a thin, derivative gruel. This On the Town is a big, handsome show, the likes of which you will seldom see again, worth a trip halfway around the globe.