An interview with Charles Kálmán, the son of Emmerich Kálmán, on his father’s last operetta, “Arizona Lady”.

A portrait of Kálmán painted in 1953.

Most people nowadays (wrongly) associate the name of Emmerich Kálmán exclusively with Hungary and Vienna. However, your father’s last operetta – his opus magnus summum – is set far from all of that, in the Wild West. Why?
Even as a young man, when he was still living in Hungary, my father devourednovels about the life of the cowboys. The Far West intrigued him. Later, in Vienna, he read the books of Max Brandt, and watched the silent movies starring William S. Hart and Tom Mix. When talkies appeared, his favorites were again the Westerns starring Gary Cooper and, later, Henry Fonda. In America, during the period in exile, he not only saw major films like The Return of Frank James (1940) and My Darling Clementine (1946), but also loved the low-budget Westerns, the so-called “B” Pictures. He watched all of them, and often dragged us children along to the movie theater too. He also liked the Roy Rogers’ movies. I am sure it’s no coincidence that the name of the leading man in Arizona Lady is Roy.

What fascinated your father about the Far West?
He loved the colorful ambience of adventure and the theme of justice—the idea that in this primitive environment, filled with cowboys and Indians, people fought for law and order—a very topical theme after the horrors of World War II.

Why didn’t your father write a cowboy operetta earlier?
He had been working on one, actually. In 1937, long after the composition of TheDuchess of Chicago (which already was a clear rapprochement to the U.S. and which contained a big musical scene with dancing Indians), Brammer and Grünwald offered him a script entitled Bozena, set in Czechoslovakia. My father read it, was enthusiastic, but said,  “For me, only something Hungarian or American, please.” When the authors refused to make changes, he rejected the libretto. Many years later, Oscar Straus set it to music (1952).

Arizona Lady was created as a great modern work with which Kálmán sought to get a new start in Europe after WWII. He returned to his 1920s formula of the “transatlantic operetta”, after the ethnic “homeland operettas” of the Third Reich.  His Duchess of Chicago (1928) had been a prime example of this formula, full of Broadway references and jazz music, which after 1933 earned Kálmán the epithet of “degenerate.”
Originally, he wanted to make a musical out of the novel Saratoga Trunk by Edna Ferber, which had been made into a movie in 1945 starring Gary Cooper and Ingrid Bergman. However, Miss Ferber did not give him the rights once she learned that he wanted to premiere the piece in Europe. She said, “My musicals or the adaptations of my novel must have their start in the U.S.”

Arizona Lady led to a reconciliation with his former librettist, Alfred Grünwald, with whom Kálmán had fallen out in 1930 and not collaborated since.

Despite their quarrels, my father had always maintained contact with Grünwald, especially in the U.S. after 1940. Both men lived in exile in New York, spoke about the good old days Vienna; together they listened to records my father had brought with him from Europe. One day, Grünwald said to my father, “It’s high time we wrote something. But it must be something about which the European press cannot say that we haven’t learned anything in America. We need to surprise people – with something new.” 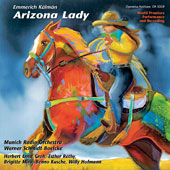 The cover of the Operetta Archive CD.

Were there other reasons for writing an operetta set in the Far West?
Maybe Puccini’s Girl of the Golden West (La Fanciulla del West) inspired him, because he admired Puccini very much. Or, like Dvořák, he wanted to compose an operetta “From the New World” after all the years in America.

Did a specific stage play serve as a role model?
In 1949/50, he went to see a show three times, that wasn’t exactly a hit, but which he nevertheless wanted to see again and again. Its name was Texas, Li’l Darlin’, with music by Robert Emmett Dolan and lyrics by Johnny Mercer. Once he even took Gustav Beer along, his other librettist. I don’t think that this musical directly inspired them to write Arizona Lady, but they still got a good whiff of the cowboy flavor.

Did your father use other American models?
The publisher Chapell always sent him the sheet music of all the new Broadway works. Shortly after the premiere of South Pacific in 1949, he traveled to Europe.  When he returned, all of America was singing Rodgers and Hammerstein’s melodies. One day Grünwald said to me, “Charlie, sit down at the piano and play us something from that musical, the waltz ‘Wonderful guy’.” I did as I was told, and Grünwald turned to my father and said, “That’s something we can do too.” Subsequently my father wrote the waltz “Am Sonntag kommt mein Mädel” (No. 15), using the Rodger’s formula of a constantly repeated refrain note. In this number, Kálmán brilliantly fuses—as he had done in the 1920′s—contemporary Broadway with traditional Viennese operetta.

The bouncing “Song of the prairie” points in the same direction, doesn’t it?
Yes, this catchy “Reit’, Cowboy, die Welt ist so weit, Cowboy” is completely different from what Kálmán had written previously in his “historical operettas”. The sound is pure Broadway—like in his best pieces before 1928. Therefore, I believe that Arizona Lady is the freshest of all his later works.

Despite such attractive music, nobody wanted to perform the Arizona Lady in Europe. Why?
My father had completed 90 percent of the operetta and offered it to the Zurich Opera, who rejected it. Afterwards, he tried placing it with the Gärtnerplatztheater in Munich, with the same negative result. In Germany at that time, there was little interest in Broadway shows or in a Broadway-inspired operetta. Instead, audiences wanted to see Mariza and Csárdásfürstin as nostalgic Puszta folklore. Even the notable 1943 Broadway hit Oklahoma!, to which Arizona Lady consciously pays homage, flopped during its tour of Germany. In the young Federal Republic of Germany, people preferred to watch movies such as Black Forest Girl (1950) or Green is the Heath (1951).

Kálmán being honored in Paris, shortly before his death in 1953.

The rejection of his new transatlantic work seemed to have depressed Kálmán greatly…
Yes, on Christmas day 1950, he suffered a severe stroke. He didn’t die of it right away, because he was an incredible fighter. But he was never again able to speak or to play the piano. He could write only with difficulty and sobbed constantly out of frustration. By the way, Grünwald also suffered a stroke in May, 1950, and Julius Brammer, his old partner on Mariza, Bajadere and Zirkusprinzessin, had a stroke in 1943 in Juan-les-Pins. Isn’t it strange that all three men died of the same illness?

How was Kálmán able to complete the operetta then?
The piano score had been finished as a rough draft. I myself made music recordings of it, which I gave to the publisher Weinberger, who in turn contacted the Bern Theater and organized the premiere there. It was agreed that the orchestrations should be done by a first-class arranger called Wolfgang Friebe. He brought his drafts to my father, who made Friebe play them over and over again until he was satisfied with the results. Mr. Friebe also contacted the Bayerische Rundfunk in 1953 and told them that Kálmán was in a hospital in Ebenhausen, near Munich. The Bavarian Radio asked if they could premiere Arizona Lady on the air, an event that took place on January 1, 1954, at 8:00 P.M., prior to the stage first night in Bern on February 14, 1954.