Mel Atkey’s new book Breaking Into Song has arrived: a collection of articles, essays and interviews from the past 35 years. As a sort of sneak preview, he has sent out an abbreviated version of the preface, entitled: “Uncool (And Proudly So)”. This is what Atkey has to say: 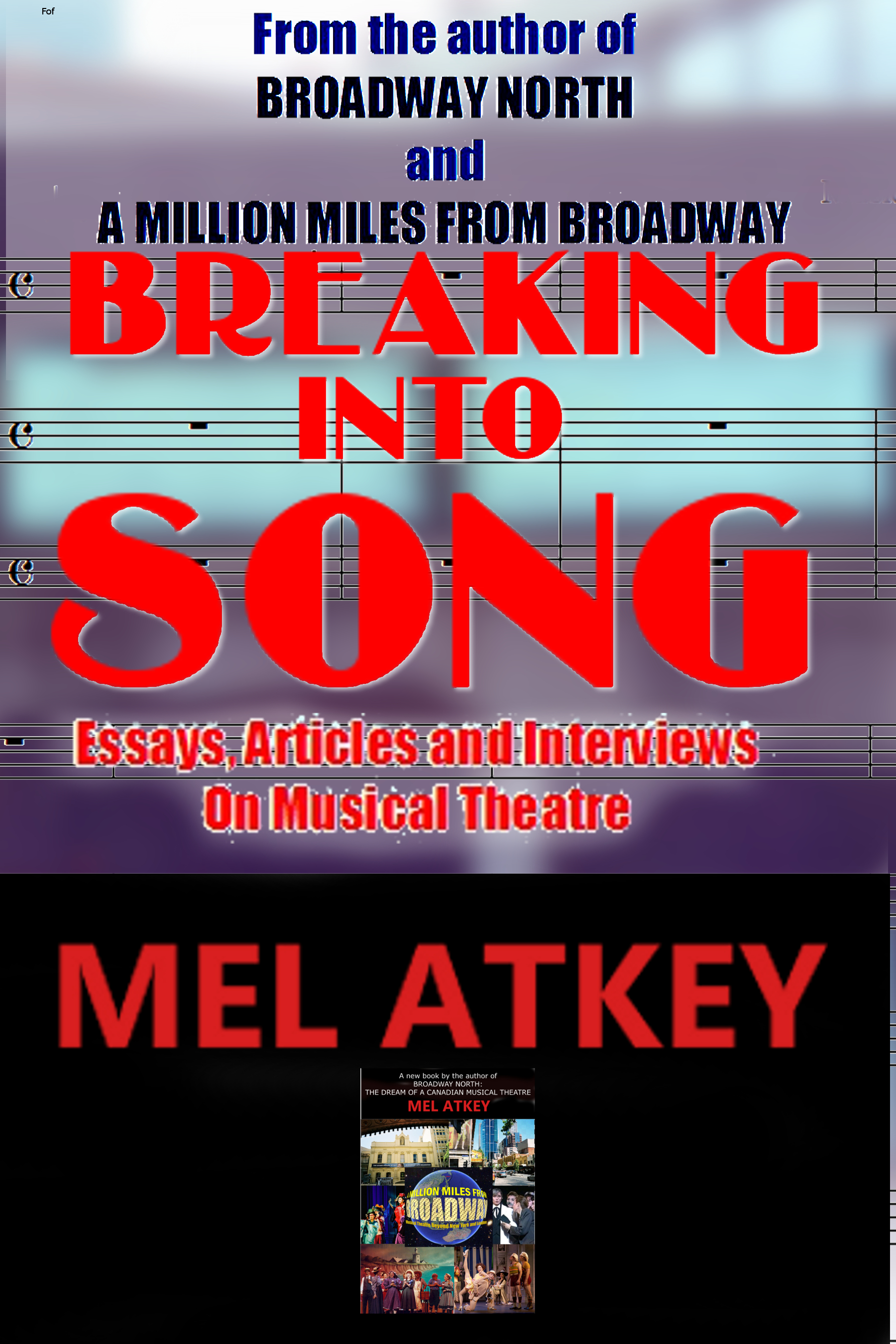 The cover for “Breaking Into Song.”

I have discovered a writer whom I believe may be my opposite number.  Not that we are actually opponents, but we approach musical theatre from opposite perspectives.

Dave Malloy is an OBIE award-winning Brooklyn-based composer, performer and sound designer.  He also happens to write what some people call musicals. I am a Vancouver-born, London-based composer, lyricist, author and occasional lecturer.  I also happen to write musicals.  The difference is he’s embarrassed to admit it, whereas I shout it from the rooftops at every opportunity.

In a 2011 blog, Malloy explained, “while I love music, and I love theater, I am acutely aware of the stigma of the term ‘musical theater,’ of all it has come to connote and the kneejerk reactions the genre tends to elicit. My community is largely one of experimental, downtown theater artists and musicians, for whom the love of musicals is either nonexistent, highly qualified, or a shameful secret.”

My background is different.  My community is not the avant-garde downtown artists and musicians, it is those whom Malloy calls “musical theatre geeks”, those who live and breathe musicals, much like The Drowsy Chaperone’s ‘Man-in-Chair’.  And just in case you want to jump to one of those knee-jerk conclusions, I am a heterosexual middle class WASP male who doesn’t fit easily into any of the ghetto-like pockets that critics want to deposit me in.

Malloy says, “The reason so much musical theater sounds bad and ‘uncool’ to so many ears, particularly when it flirts with rock, is because it lacks authenticity. Because it is being sung by people who aren’t rock singers. They are acting. It’s an obvious but critical fact; actors perform in fundamentally different ways from musicians.”  Of course they do.  When Olivier played Hamlet, people expected to see an interpretation of Hamlet, not the histrionics of an actor.  It’s true that in the audience may be some of what Canadian musical writer John MacLachlan Gray calls “cultural souvenir hunters”, but Olivier’s responsibility to the audience was to present a representation of Shakespeare’s character, not a manifestation of his own persona.  Rock music cherishes “rawness” whereas musical theatre requires discipline. 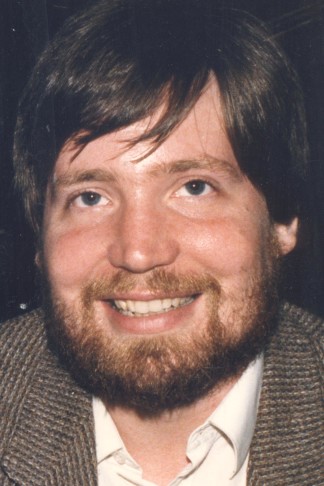 Is being “cool” even good?  Or does it make your work ephemeral, like last year’s trends?  When I was a teenager, I was decidedly “un-cool”.  I learned – painfully – not to trust those voices that urged me to follow the crowd.  It always amuses me when those who claim to be at the cutting edge concern themselves with whether or not they are cool.  Then again, the “cutting edge” has always, to me, denoted something to protect my fingers from.  What I care about is learning a craft and doing it well.  So, you see, I understand “un-cool”.  I get it.  I embrace it.  I own it.

That said, when it came to learning my craft, I took an unusual path to get there.  When I was in high school, I didn’t get the leading roles in the school musicals.  Having the voice of a tone-deaf hyena and the physique of an arthritic coat-rack didn’t help. The drama teacher strongly resented any implications that she had played favourites in the casting of school plays, so I decided that rather than argue with her, I would just go my own way.  With a group of fellow misfits, we formed our own group, hired a local auditorium and put on our own show – a musical comedy version of Shakespeare’s “Scottish play”, Macdeath.  The school authorities threw every obstacle at their disposal in our path.

But it appears that I was to have the last laugh.  While doing an internet search of my name a few years ago, I came across a site called “A List of Baseball Songs Identified at the Library of Congress”.  Number 67 was “The Baseball Song” by Mark Telford and Louis [Melville] Atkey.  This deathless aria was sung by Macbeth and Banquo to the three witches (as a diversionary tactic – don’t ask). This was all contained in a book of baseball trivia called Everything Baseball.  As best as I can figure, somebody trawled the copyright registrations and uncovered this gem.  How anybody stupid enough to conceive such a project could muster the acumen to carry out the research is beyond me, but there you have it.  It is not possible to be more trivial than that.

We pulled it off – sort of.  I can’t honestly say that there were any predictions of great things for the talent on display – although in fact our leading actor Michael Robinson would turn professional and pass on his improv skills to other actors, including Cate Blanchett.  The only other legacy is the opening number “I’d Like to Get Friendly With You”, sung by the witches to Macbeth and Banquo, which gave The Friendlysong Company its name.

After high school, I did not take the conventional route of going to university, as nobody had yet had the inspiration/courage to attempt to teach musical theatre at the academic level.  Instead, I set my own course of study.  My first stage was to join the University of British Columbia’s Musical Theatre Society.  (Not being a UBC student was not a barrier to this – some of my colleagues included future Stargate actress Teryl Rothery and Flesh and Bone creator Moira Walley-Beckett, neither of whom were students.)  We were led by veteran choreographer Grace Macdonald, whose students included dancer Jeff Hyslop.  Mussoc was where I learned to truly love the form.

My next step was a brief career as an arts journalist on radio, TV and in print.  The television aspect was particularly short-lived, as my face had all the expressiveness of a stagnant cess pool.

I did, however, manage to see around two hundred shows a year, including the Broadway touring companies that came to nearby Seattle.  I also managed, during this time, to do a number of celebrity interviews, two of which are included in this anthology.

For two years – from 1981-83 – I wrote theatre reviews for CHQM-FM and for the Georgia Straight newspaper, while also contributing occasional articles to Playboard (roughly Vancouver’s equivalent to Playbill), two of which are also included here.

In 1983 I left Vancouver for Toronto, where for a short time I was a member of the Guild of Canadian Musical Theatre Writers’ Lehman Engel workshops.  I thought I was going to be a big fish in a small pond, and rise quickly to the top.  I learned two things: a) I was a small fish in a big pond, and b) a fish rising to the top is not a good omen.

I struggled for a few years – nearly had a show produced starring James Doohan, Star Trek’s “Scotty” – until I came under the influence of noted television producer Norman Campbell, composer of Anne of Green Gables – The Musical.  He got me started on the next phase of my education – the study of my own musical theatre heritage.  This eventually became my book Broadway North – The Dream of a Canadian Musical Theatre and its later follow-up, A Million Miles from Broadway – Musical Theatre Beyond New York and London.

Then in 1991 I moved to London, where I became a Professional Writer Associate of Mercury Musical Developments and met the American director and writer Bob Sickinger, with whom I would write two musicals.  I also began to lecture on musical theatre after attending a conference where I met a professor who taught a course in Canada based on my book Broadway North.  Deciding that any students on such a course deserved to hear it straight from the horse’s mouth, I finally took the first steps toward earning my MA in Musical Theatre (yes, Virginia, there now is such a thing) at Goldsmiths University of London.

So, it may be un-cool.  But, in any case, what follows is some of the fruitage of my thirty-five year learning curve.

Breaking Into Song can be ordered by clicking here.