One of the many variants on the Abu Hasan ‘king for a day’ tale, Justin McCarthy’s play If I Were King (Garden Theater, 14 October 1901) was – in spite of the cold statistics of its first run of just 56 Broadway performances – a considerable success, with Edward Sothern starring as the historical ruffian poet François Villon who, in McCarthy’s version (based on R H Russell’s novel), is made king for a week, defeats Burgundy and wins a royal bride. 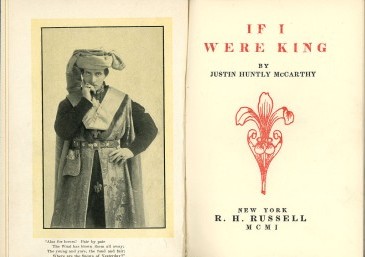 ustin McCarthy’s “If I Were King”.

In 1922 the young Richard Rodgers and Lorenz Hart wrote a musical version of If I Were King which was produced in an all-girl amateur performance with the equally young Dorothy Fields as Villon. It evoked the interest of producer Russell Janney, but he was unwilling to take a chance with these unknown writers and he subsequently hired a better-known composer to write a score for a version of the play as adapted by W H Post and Brian Hooker. The composer he chose was Rudolf Friml, then basking in the enormous success of the previous season’s Rose Marie.

King played Villon, a swaggering thief and versifier, who has been sending love-poems to the courtly Katherine de Vaucelles (Carolyn Thompson), and who boasts in the presence of the disguised King of France (Max Figman) himself that he, Villon, would make a more effective leader in the war against Burgundy. To take a personal revenge on haughty Katherine, the King gives the arrested Villon 24 hours as Grand Marshal of France, and the mission to make good his boast to win his lady as a bride by the morrow or lose his life. Villon has the court make ostentatious revelry and at the same time organizes the beggars and vagabonds of Paris into an army which defeats the besieging Burgundians. He is saved from the gallows when the 24 hours are up, when Katherine freely gives her hand to the man she now knows is only a vagabond.

A traditional comic element, represented by Villon’s little friend Guy Tabarie (Herbert Corthell), was tacked in alongside the main plot, but the dramatic character of Huguette (Jane Carroll) who sacrifices her life to save Villon from a plotter’s dagger was retained, helping to keep a thoroughly dramatic core to the piece.

Friml’s score was in the most vigorously romantic vein, more richly coloured than his Rose Marie music and ideally suited to the subject in hand. Villon’s virile call to the people of Paris, the Song of the Vagabonds, was one of the most stirring marches ever to have come from the Broadway theatre, and his duet with Katherine, ‘Only a Rose’, one of the most thoroughly romantic of love songs. 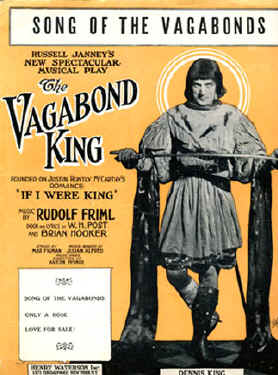 The star was well equipped with further romantic numbers (‘Tomorrow’, ‘Love Me Tonight’) to place alongside his martial song, and these were supported by two fine numbers for Huguette (‘Love for Sale’, Huguette Waltz), an atmospheric Scotch Archer’s Song which set the scene for the second act with great effect, and a comic serenade featuring Tabarie.

The Vagabond King ran for 511 performances on Broadway and it confirmed this appeal on the other side of the Atlantic when Janney mounted his show at London’s Winter Garden Theatre with Derek Oldham starred as Villon alongside Winnie Melville (Katherine), Mark Lester (Tabarie) and Norah Blaney (Huguette). It ran for 480 London performances before touring and later returned to London on three occasions: in 1929 Alec Fraser played Villon (Adelphi Theatre, 14 October), in 1937 Harry Welchman starred (London Coliseum, 18 March) and in 1943 Webster Booth and Anne Ziegler featured back at the Winter Garden (22 April). In Australia, J C Williamson Ltd’s production starred Strella Wilson, James Liddy, Arthur Stigant and Mabel Gibson for a season of more than 100 nights in Sydney, but although it proved less popular than The Desert Song which preceded it and The Student Prince which was brought back to replace it in Melbourne, it did well enough to cement the show’s popularity, and the popularity of its songs, in another area of the English-speaking world.

In spite of the fact that it was indubitably a better made piece than its famous predecessor, The Vagabond King did not, however, follow Rose Marie to the long list of more distant, foreign-language stages which had made the earlier piece such a remarkable musical theatre phenomenon.

It did, however, turn up at Amsterdam’s Theater Carré in 1932 where the rising Johannes Heesters, Mimi Lebrat, Nelly Gerritse and Oscar Tournaire featured in a rare foreign-language production. 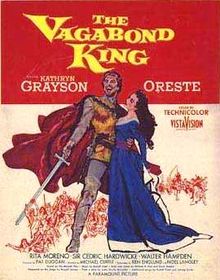 A Paramount film was released in 1930 with King repeating his original rôle alongside Jeanette MacDonald. O P Heggie was the King, Lilian Roth played Huguette and Warner Oland the treacherous Thibault and a song entitled ‘If I Were King’ was interpolated. A second attempt was made at filming the show in 1956 when Maltese tenor Oreste Kirkop and Kathryn Grayson were paired in a version which used four new pieces, credited to Friml and Johnny Burke, alongside half a dozen pieces of the original score.