How could we get through January 1st without the obligatory New Year’s Concert from Vienna? The 2016 edition was conducted by Mariss Jansons, for the third time after 2006 and 2012. What exactly qualifies Jansons to repeatedly try his hand at light dance music from the Strauss dynasty is anyone’s guess. It’s certainly not the repertoire he has based his career on, and it’s not a repertoire he has any special talent for, as was evident in his interpretation of the Eine Nacht in Venedig overture. The famous “Gondellied” in there was so drawn out and languid, that Jansons redefined the word “easy listening” (and “lullaby”). But maybe that’s the attraction of this Neujahrskonzert ritual: it numbs the brain and soothes the ear after a loud and busy party night the night before? 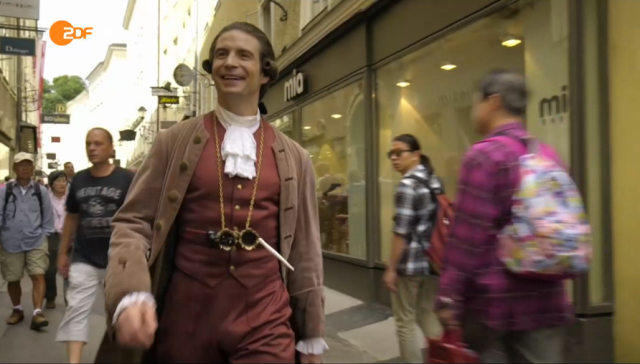 “Mozart” in Salzburg, in a PR film during the interval of the Neujahrskonzert from Vienna. (ZDF/Screenshot)

During the interval, the ORF presented a film on “200 Years Salzburg.” Seeing this in the context of the world’s most successful classical music event was a bit like being on a promotional tour: you sign up to see/hear Strauss music, yet along the way you’re taken all over the place to “discover” other goodies, too. It’s like the “Kaffeefahrten” my grandmother went on: she was promised some famous cultural highlight, but basically spent the entire afternoon in a café hearing about pots and knives and blankets (or microwaves) she might want to buy. She always came back with boxes full of stuff from these trips, and could never remember what cultural highlight she originally intended to see. Watching the Vienna New Year’s Concert is a bit like this. Suddenly, you’re seeing “Mozart” in a historical costume, wandering through Salzburg, advertising the touristic glories of the Salzkammergut.

In between that, you get various members of the Vienna Philharmonic Orchestra playing chamber music from their various new CD releases. For example the three Ottensamers – Ernst, Daniel, and Andreas – playing highlights from their latest CD “The Clarionotts” as prime-time promotion for their Deutsche Grammophon disc.

I wonder if they had to pay the ORF for this, or if this was a deal among “friends and family”? (After all, the Neujahrskonzert from Vienna is big money and big business. Nothing happens there coincidentally.) 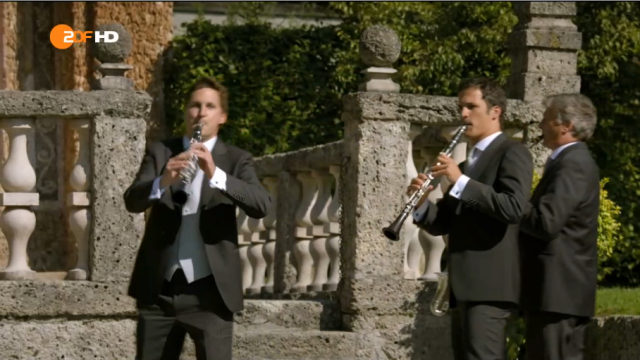 The three Ottensamers, playing tracks from their new CD during the interval of the Vienna New Year’s Concert. (ZDF/Screenshot)

Musically speaking, the only interesting novelty of this year’s concert was the inclusion of the Robert Stolz “UNO Marsch” from 1962. For some reason, Stolz music has been absent from the Vienna New Year’s proceedings so far, even though Stolz can fit their “switch your brains off and enjoy the lush music” concept perfectly. Maybe there will be more Stolz in the years to come? What a pity Einzi Stolz did not live to witness this moment of belated triumph. 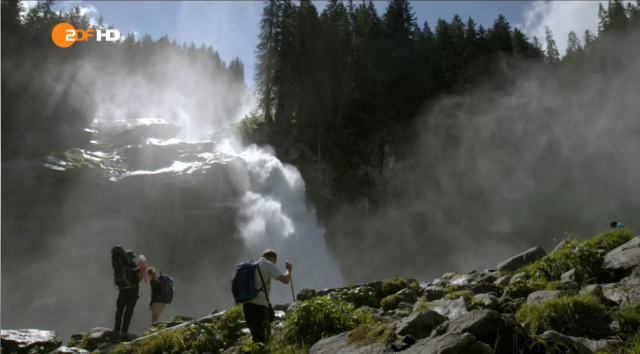 Showing the natural beauty of Austria during the New Year’s Concert from Vienna. (ZDF/Screenshot)

Using music and a specific composer for touristic propaganda is perfectly legitimate, of course. Sadly, the consequence of this re-positioning of Johann Strauss and his music – including his operetta music – is that it blinds you to everything that is actually novel and historically interesting about this oeuvre. Many people refuse to acknowledge that there is more to Strauss and Viennese operettas than a never-ending row of roses and orchids, as seen in the concert hall of Vienna’s Musikvereins-Saal on January 1st. With ballet dancers in historical costumes swirling around elegantly in historical settings, champagne glas in hand. Yes, that’s one way of “doing” operetta and Strauss music.

But that’s like saying Mozart’s music is nothing more than a resounding “Mozart Kugel” advertisement: wrapped in golden paper, over-sweet, with no differentiation between pieces and no acknowledgement of the importance of the composer. 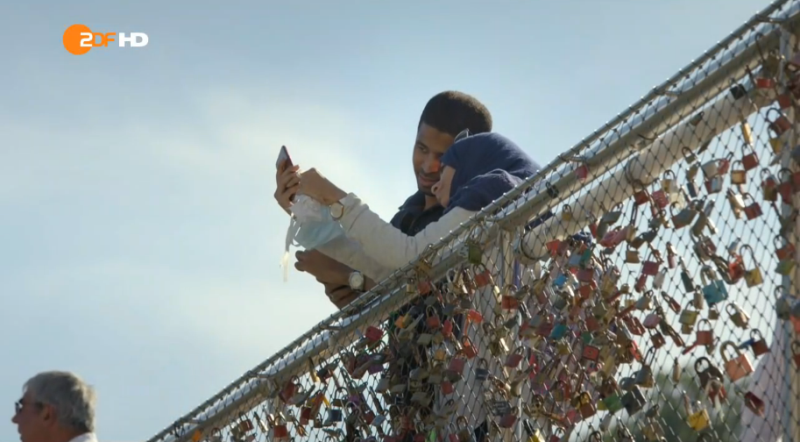 Making sure that Muslims feel included too: a scene from the PR film shown during the New Year’s Concert from Vienna. (ZDF/Screenshot)

Johann Strauss II as a composer, man, historic personality is much more multi-layered than what was shown on ORF, and much more modern than the New Year’s Concerts from Vienna want to make you believe. Erasing these gilded images from memory when you actually want to produce (and enjoy) Eine Nacht in Venedig, Fledermaus, or Indigo und die 40 Räuber is a tough task. And though the Vienna Philharmonic are the patrons of the new critical edition of these scores, they are not exactly helping promote a “critical view” of this music with their sell-out to the tourism industry. Using the spot in the annual lime light to promote lies such as the legend of the “75th Anniversary of the New Year’s Concert” is downright scandalous, because it erases all traces of the infamous Nazi past of the orchestra and this concert’s origins, because they too don’t fit the flowery and over-harmless PR image Austria wants to promote with Strauss Jr.?

I wonder if there will ever (again) be a New Year’s Concert from Vienna with a conductor and soloists who actually care about this type of music and invest time and energy in studying it, closely? Maybe one day we’ll have René Jacobs or someone like him redefine the Strauss sound we are force-fed with, just to demonstrate there is another way of looking at Austria – just like the rest of Austria doesn’t always look like the promotional film shown during today’s concert wants to make you believe. Rediscovering the “dirty” and “rough” side of Johann Strauss and Viennese operetta music would be a worthy task. But perhaps that’s something better left to Berlin, German language operetta’s “poor but sex” twin-city? (Where the local Philharmonic’s Silversterkonzert is not an all-round convincing event either.) 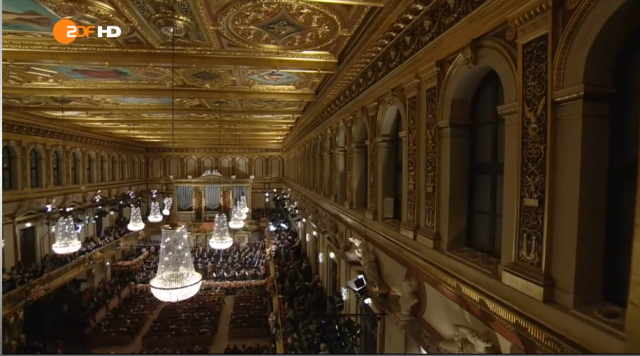 Redefining “Goldene Wiener Operette” with the annual New Year’s Concert from Vienna: the golden great hall of the Musikvereinssaal. (ZDF/Screenshot)

The CD version of this concert will be out shortly.