A piece in the vein of the fairytale burlesques of Victorian times, Into the Woods brought together some familiar nursery tale characters – along with some other less familiar ones – in a jolly adventure of the Quest variety which didn’t stop at its happy ending. The show opened on 5 November 1987 at the Martin Beck Theater, New York. 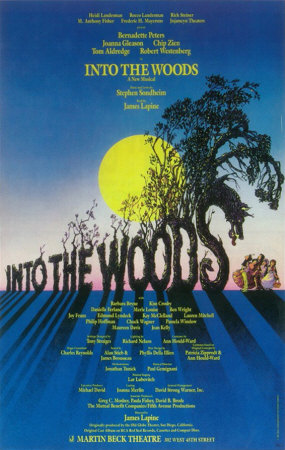 Poster for the original Broadway production of “Into the Woods.”

The quest is one imposed upon the Baker (Chip Zien) and his wife (Joanna Gleason) by their neighbouring witch (Bernadette Peters), who cursed their family with childlessness after the Baker’s naughty father (Tom Aldredge) stole her magic beans. The Baker sets out to get his hands on the cow of Jack the Giantkiller (Ben Wright), the golden slipper of Cinderella (Kim Crosby), the hair of Rapunzel (Pamela Winslow) and the hood of Little Red Riding-Hood (Danielle Ferland). Several dead bodies and a lot of lying and cheating later, the magic is concocted and everyone gets what they wanted – the Baker’s Wife gets pregnancy, the Witch gets youth and beauty, Jack a fortune, Rapunzel and Cinderella a Prince apiece (Chuck Wagner, Robert Westenberg), and Cinderella’s Ugly Sisters some self-improvement. Unfortunately for them, however, there is another act to go. Happiness cannot be ever-after. One of Jack’s beanstalks produces a fresh giant (Merle Louise), the spouse of the last one killed, and as everyone heads off into the woods again, under the pressures of a few more deaths, more lying and more cheating, the happy ending starts to crack up. A little co-operation between Jack and the Baker eventually finishes off Mrs Giant, and at the end of the act the depleted band are left to mull over their experiences and the lessons they have (or ought to have) learned.

The score of the piece included some fine comic moments, topped by a duo for the two Princes suffering egoistic ‘Agony’ as they lust over Rapunzel and Cinderella in Act One, and then over the Sleeping Beauty and Snow White in Act Two, Little Red Riding-Hood’s encounter with an X-rated wolf (‘Hello, Little Girl’), Cinderella’s Prince’s polished line of seduction as practised on the Baker’s Wife (‘Any Moment’), and Cinderella’s monologue over the same Prince’s dirty trick of laying pitch on the palace steps to stop her running away at midnight as per literary tradition. Little Red Riding-Hood headed a lively title-song, and the Baker’s Wife and the Witch performed the more contemplative and lyrical pieces, of which the Witch’s melodious waltz, ‘The Last Midnight’, stood out.

Although the show had moral and social points to make, it stood up – particularly in its first act – perfectly well as a face-value fairy story. 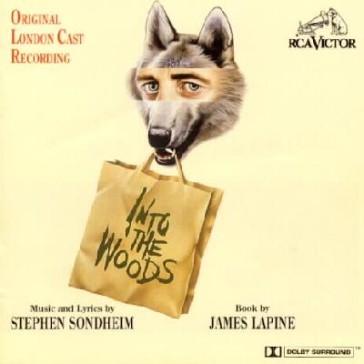 David Mirvisch’s British production, with Julia McKenzie (Witch), Ian Bartholomew (Baker), Imelda Staunton (Baker’s Wife), Mark Tinkler and Clive Carter (Princes) and Jacqueline Dankworth (Cinderella) featured was not given the kind of breath-for-breath restaging usual in the later years of the 20th century. However, it fared less well than its American counterpart, lasting only 186 performances at the Phoenix Theatre. After a German version (ad Michael Kunze) was first seen in Heilbronn in 1990 with Tom Zahner (Baker), Thea Schnering (Baker’s Wife) and Esther Stein (Witch), and then at Munich’s Theater am Gärtnerplatz (14 April 1991) with Erich Hallhuber, Noemi Nadelmann and Marianne Larsen featured, several other German houses showed interest in the piece, which seems to have found its most appreciative theatre-directors in the land of the Brothers Grimm. 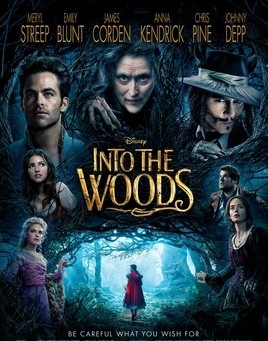 Into the Woods was also taken up for regional production both in America and in Britain, appeared on stage and television in Denmark as Langt ud i Skoven, in New Zealand and, after a disastrous saga of walkouts, breakdowns amongst actors and the mechanical scenery, and postponements, in Sydney, Australia where Philip Quast, Tony Sheldon, Judi Connelli and Geraldine Turner featured in a truncated season. It continued on to make itself one of the more frequently produced amongst the musicals of its era, largely in the subsidised theatre. It was given a brief return season in London at the Donmar Warehouse (16 November), and another by Australia’s Melbourne Theatre Company (17 January) in 1998.