The Volksoper Vienna has revived the 1936 hit Axel an der Himmeltür, originally written for Zarah Leander and Max Hansen. And they prove: it is possible to stage that show – a Hollywood satire with music by Ralph Benatzky – without the deep-voiced later Nazi siren and post-WW2 superstar. 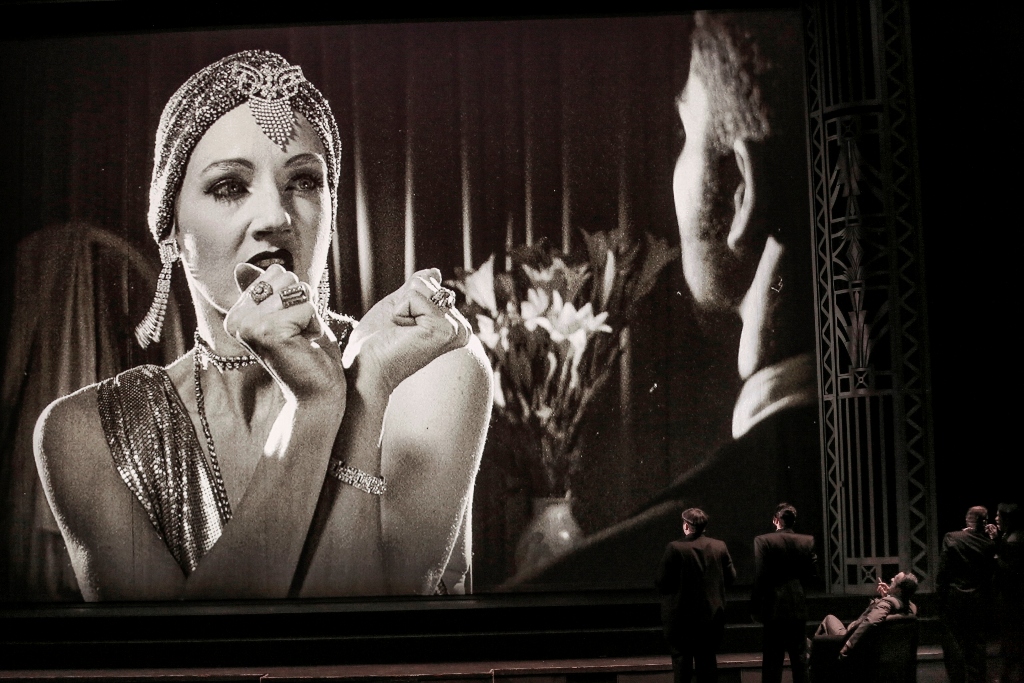 It’s a story that could only have been written by the 20th century. And it is, sadly, a very true one, on its comical side, as well as in the sad parts. Because this kind of double-edged narrative is typical for the frivolous and always up-to-date operettas of the 1920s and early 30s, when nearly all the creative people busy in this field were Jewish and brought their typical humor to the genre, until the Nazis cut that short in 1933.

Legend has it that in 1936 Vienna producers were hiring a mysterious Swedish actress for a new musical comedy, after the originally cast Greta Garbo (!) had pulled out of a project. It was a show about a secretive “Hollywood star.” The producers found a Garbo-substitute when Max Hansen recommended – half Scandinavian himself – the “lady bass singer” called Zarah Leander. She became a sensation overnight with Axel an der Himmeltür which translates as “Axel at Heaven’s Gate.” So sensational was Leander’s success in Vienna that Joseph Goebbels offered her a contract for the German film company UFA. This turned her – just like her role in Axel – into a “Kinostar, du Abgott des Jahrhunderts,” a cinema star, the “god of our century.” Leander’s stardom lasted, in its first phase, until 1942 when she retired from the bombs and the war chaos to her country home in Lönö, Sweden.

After that the boulevard comedy with music, Axel an der Himmselstür, was mostly forgotten. The other stars originally involved – male lead Max Hansen, composer Ralph Benatzky, and book author Paul Morgan – either fled from the Nazis in 1938, when Austria was annexed, went into exile, or died at Buchenwald. Leander, however, once she revived her career in post-war times, recorded the full show in 1958 for the Austrian radio station ORF, her voice having meanwhile sunken into the lowest depth of the vocal abyss. This glorious recording of her Gloria Mills is available on CD today. 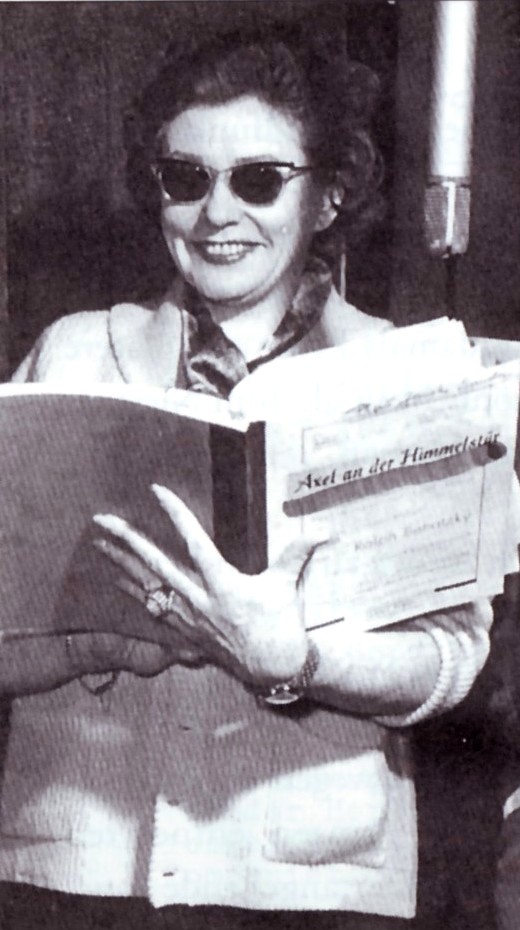 Now, 80 years after the world-premiere in 1936, this cheeky Hollywood reporter Axel, in search of a big exclusive interview with the big screen idol Gloria Mills, is once again standing in front of the gates of the palatial Beverly Hills home of this sensual cinema goddess. But not at the Theater an der Wien, where Axel originally premiered, but at the city’s Volksoper. There, the show produces storms of laughter and applause from an enchanted modern audience. Because in the new production everything is parody, nothing takes itself seriously: clichés are whirled around and made to tap dance. As a result, the long forgotten bubble of excitement – reflecting a very particular moment in time – works its magic once more, having been re-styled and optimized in the right comedy manner to fit our current tastes. 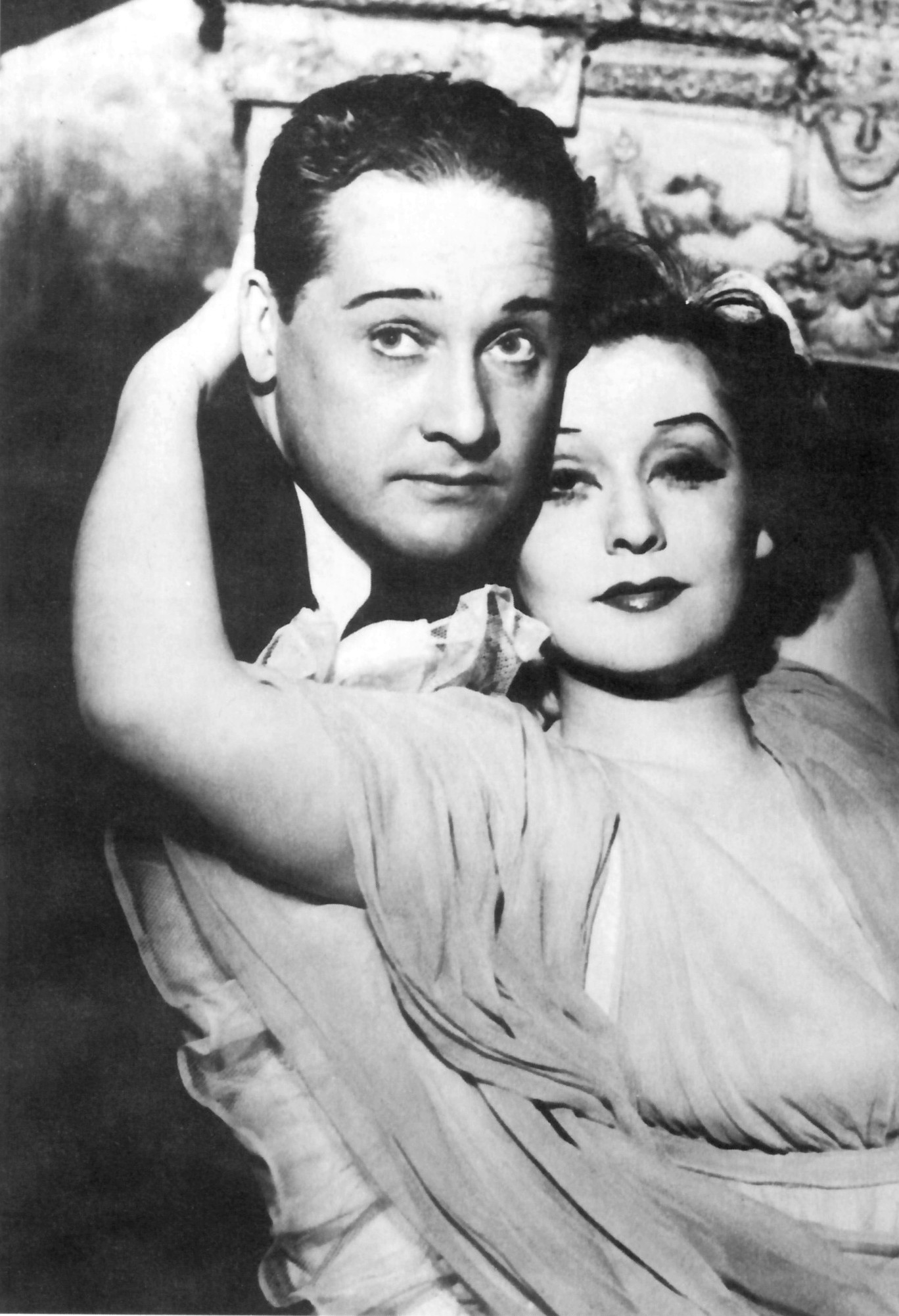 Especially the music sparkles that Ralph Benatzky wrote for his 77th stage work.

Even though he did not want to write Axel originally, and even though many operetta fans have disqualified the score as “lacking” for years, claiming there wasn’t enough “music” and “too much dialogue.” At the same time ignoring the historical importance of Axel in the history of Viennese operetta, and turning a blind eye (or ear) to the string of hit songs that have been kept alive by Miss Leander and her many imitators. 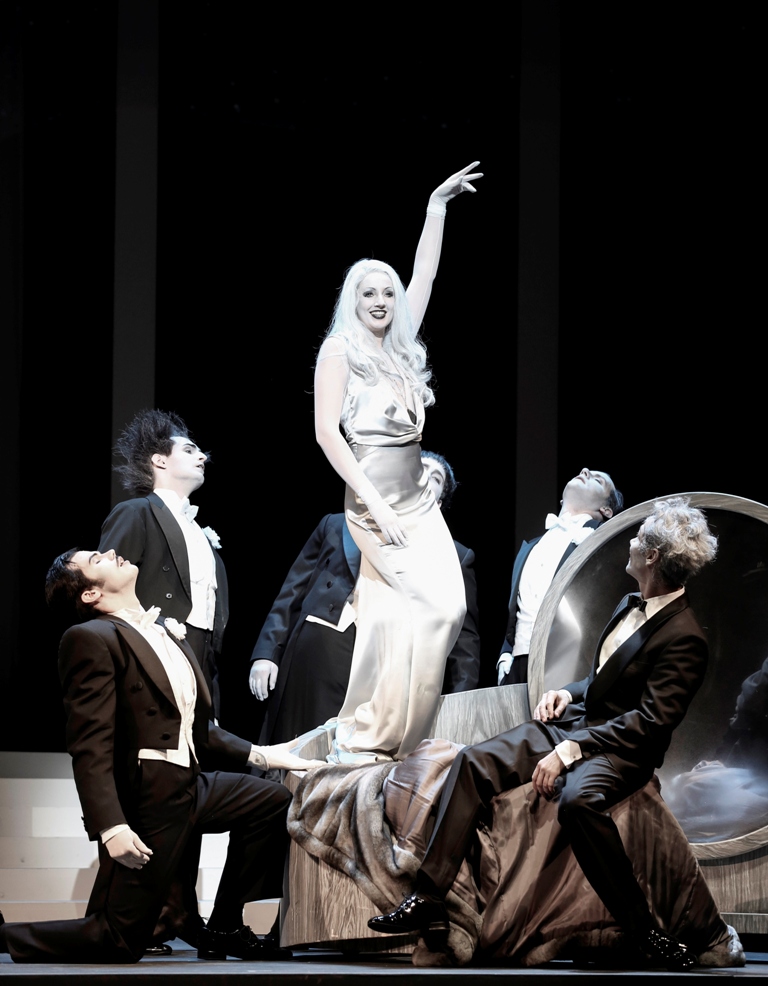 Benatzky is best when he offers imitations of highly diverse popular music styles, from this and that side of the Atlantic. His score has been enriched for the new production by a few other titles, then redistributed among all the characters, and re-orchestrated by Kai Tietje in a highly competent manner that sounds jazzy mostly, and only sometimes (consciously) cheesy. The bouncy conductor Lorenz C. Aichner is not afraid to let loose in the grand schmaltz moments celebrating Vienna “made in California.” The audience bursts with laughter at all the jokes, and it moves its hips in the swing rhythms of the “In Holly-Holly-Hollywood” song, while the diva on the verge of a nervous breakdown can sing her big solo “Gebundene Hände” (“Tied Hands”) falling apart with (fake) self pity.

That is something Bettina Mönch does really well as the burn-out prima donna who is a glamorous Garbo lookalike. Mönch is flexible, blonde, poisonous, a vamp, and she has a high and shrill voice. In other words, she is the total opposite of the heroic contra-alto Zarah Leander with her Scandinavian sentimentalities. Which is a good thing. This anti-casting avoids all Leander associations from the start, and it presents this show afresh and anew with a lot of exposed leg, a giant revue stairway, and with the striptease classic “Zieh’ dich aus, schöne Frau”: “Get undressed, pretty lady!” Which Mönch/Mills does, eventually, but only for her gallant reporter friend who has managed to trick her into a dinner date. 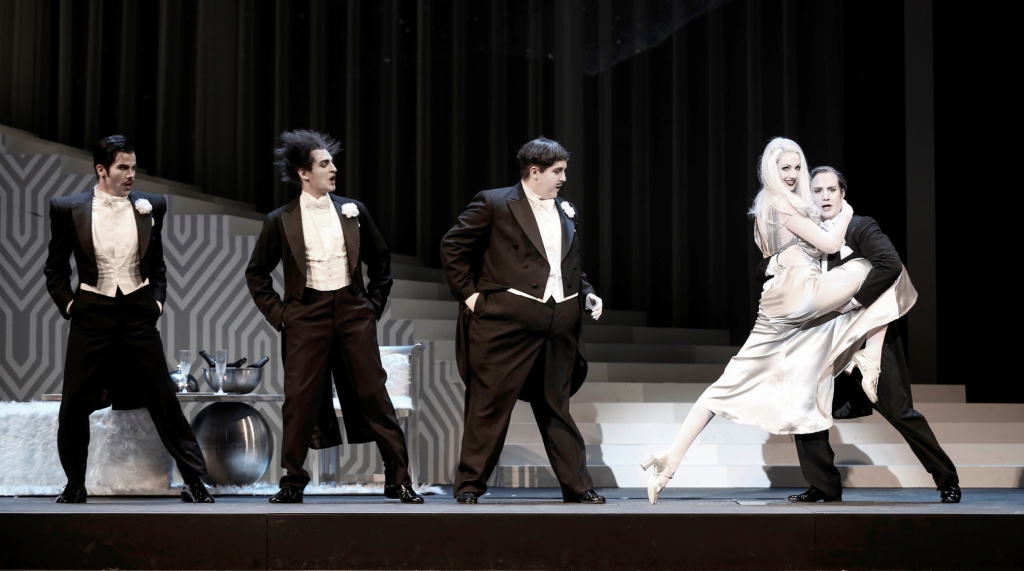 Andreas Bieber plays the emigrated Mr. Swift – the man “with the pen“ (a “Stift”) – who is originally Herr Stiftelmeier from Vienna. He is a charming paparazzi reporter with something like boy grandezza: an eternal child that loves the magic of Hollywood and wants its own piece of the dream cake, no matter how many calories and dangers that involves.

Circling around this ideal leading duo, dressed in cinematic black-and-white, is a wise-ass film producer (Kurt Schreibmayer), a glorious secondary buffo couple consisting of an American type-writing secretary (Johanna Arrouas) and an exiled barber from Ottakring (Boris Eder), as well as five gentlemen who substitute for the chorus and call themselves the “Hollywood Harmonists.” 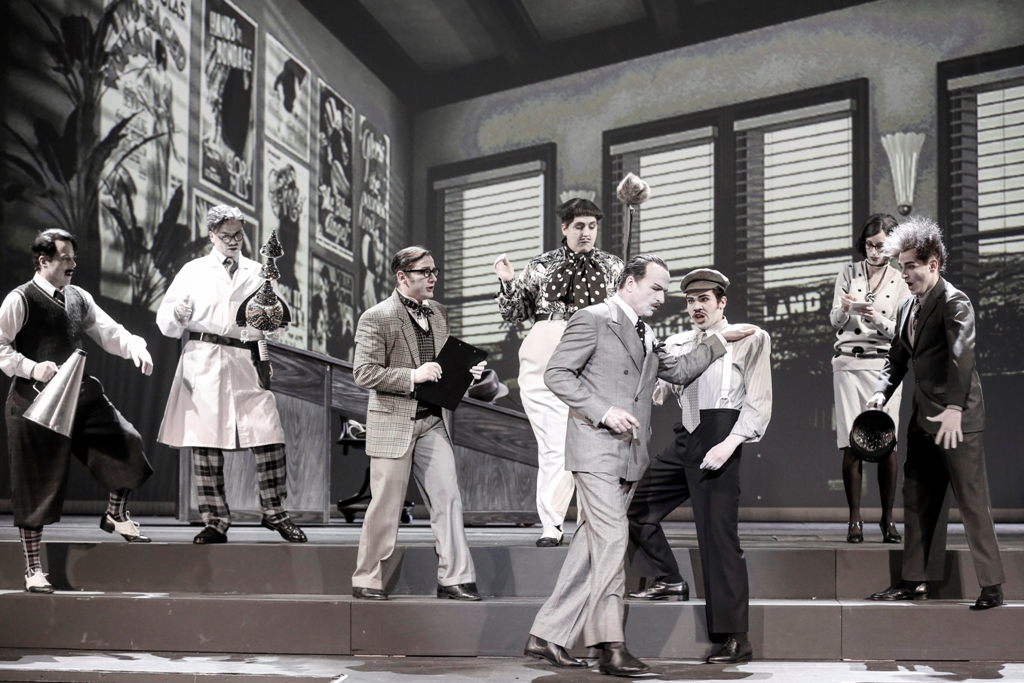 There is constant movement, and hardly a moment to think. Because there are always new film clips projected into the giant screen behind the art deco frame that Sam Madwar has constructed. The sets are cartoons, and they move around and around in an almost grotesque way, whirling everything together: from fake movie posters, fake stars, action sequences. There are characters running around “live” in their underwear on the stage, while above there is a filmic hunt for the diva’s diamonds, with the wicked ex-lover of Gloria Mills as the perfect villain. It’s perfect slapstick, served up with perfection. Because director Peter Lund knows his craft, and he has watched closely what Barrie Kosky has done at the Komische Oper Berlin with his various operetta revivals.

Lund knows when he has to re-write a scene, shorten is, stretch it, update it. And it works marvelously well.

You could argue that this witty, intelligent, entertaining and banal new Axel an der Himmelstür is even better than the original: a glorious modern musical based on an equally glorious musical comedy from 1936. Is there any chance that this show will also conquer Berlin sometime soon, maybe with Dagmar Manzel as the “Kinostar, Sehnsucht tausender Mädchen” (“cinema star, the idol of thousands of girls”)? If I were her, I’d recommend warming up, vocally, for this rediscovered blockbuster, just to be ready.