It might be imagined by those who underrate the virility of convention that the good old-fashioned musical comedy would not thrive amid the disillusioned realities of to-day. But no, nothing will ever take the place of that peculiar blend of life, love and laughter which exists in order that a beauty chorus, more and more dependent on the actual charms which God gave them, may assault our senses; in order that a tenor and a soprano may scream in our ears or croon into each other’s; in order that one or more comic or partially comic gentlemen may sweat before our very eyes in order to divert us. 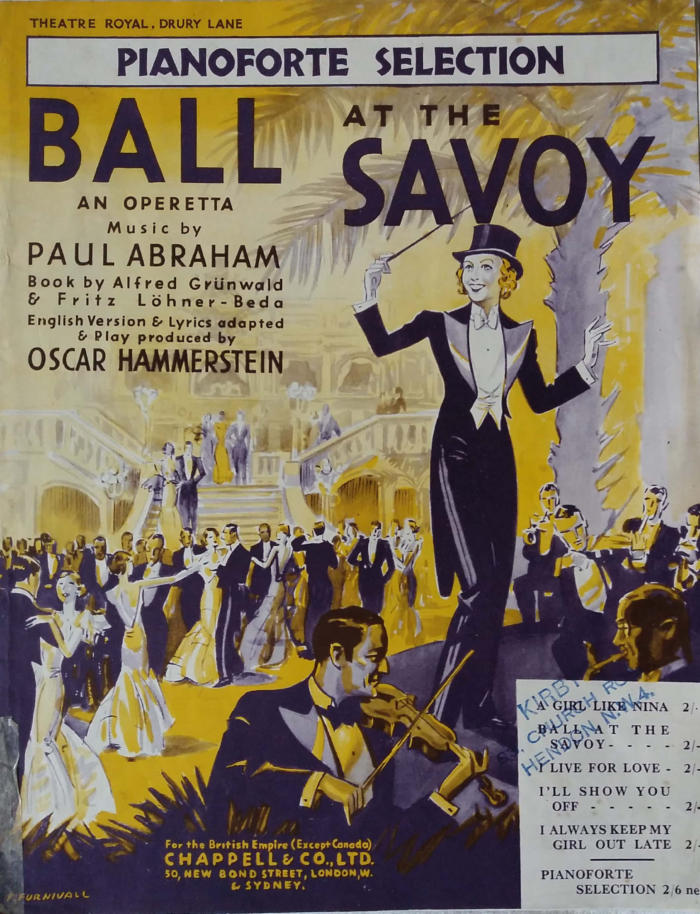 The London version of Abraham’s “Ball at the Savoy” with lyrics by Oscar Hammerstein II, showing Rosy Barsony on the cover.

Mix all this up with scenes of gorgeous splendour and real beauty in some land other than England; pepper it with catchy tunes and ingenious dances; and you have, just as George Edwardes had and others before him, the elements of success.

Such is “Ball at the Savoy.” But you are not to suppose for a moment that I deride it, or that I am being superior about it. On the contrary, I enjoyed it very much. 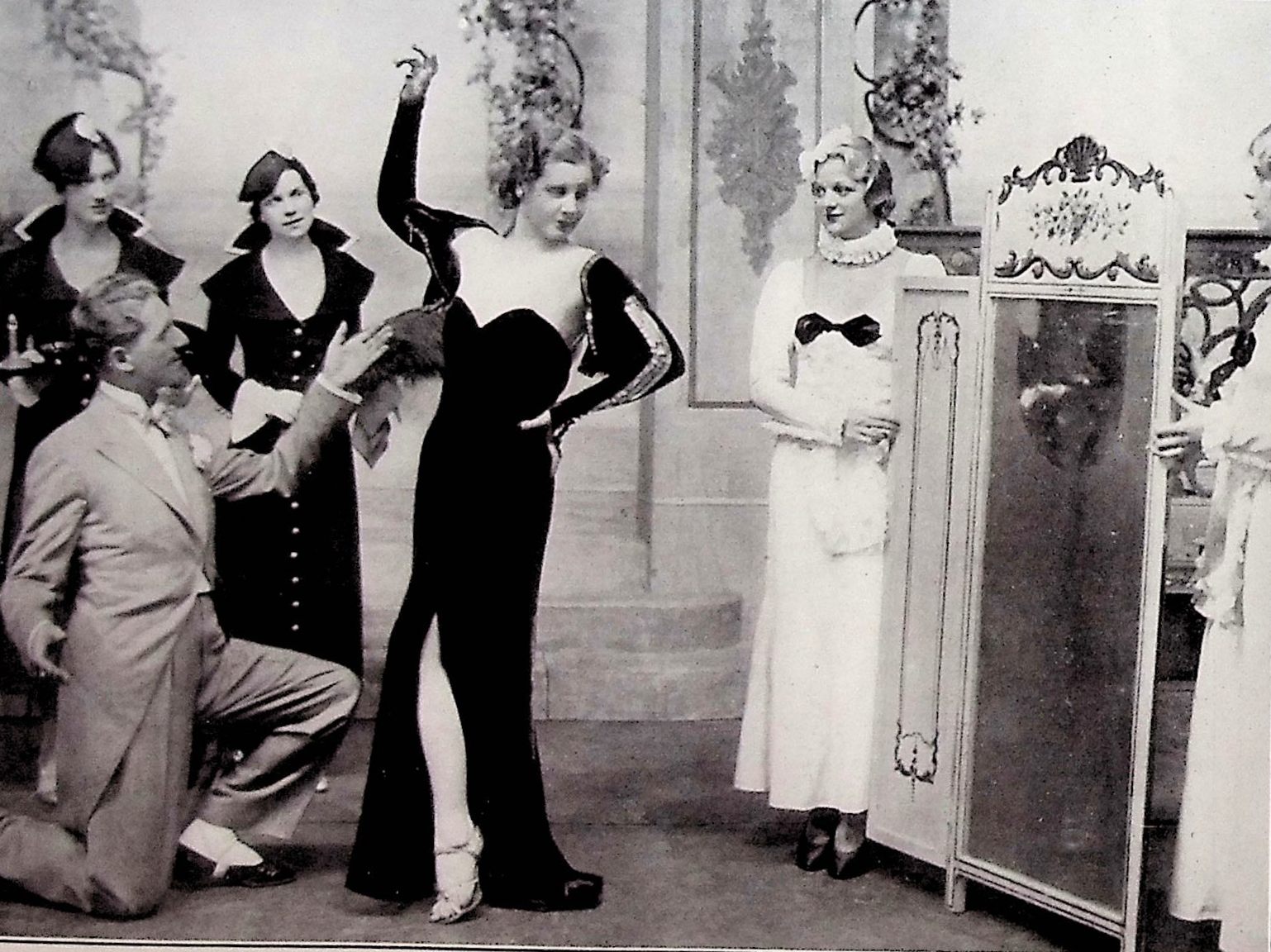 Natalie Hall preparing for the “Ball at the Savoy” in the 1933 London production. (Photo: Thomas Krebs Archive / “The Play Pictorial”)

It has quite a reasonable story of how a charming bride (inevitably married to a fascinating French Marquis) believes herself deceived, and plans a frightful revenge by not only deceiving her husband but making him fall desperately in love with her, disguised by a mask and a certain absence of clothing, which could hardly have deceived a husband at all.

Of course, all ends quite happily and everyone including the shadowy figure of honour, is satisfied. 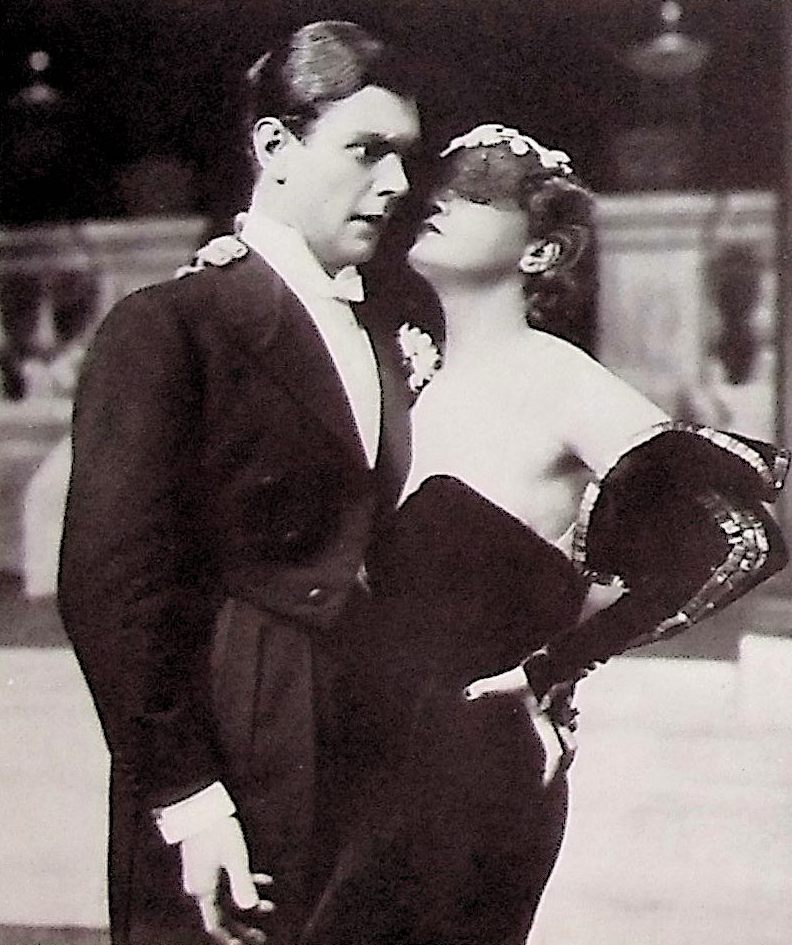 Meanwhile we have heard Natalie Hall sing quite charmingly and seen her look ravisihing, while Maurice Evans, as the Marquis, has done everything that a French Marquis is expected to do.
We have been genuinely entertained by Oskar Denes and Rosie Barsony, while Barry Mackay has surprised us by a perfect little gem of real acting in a real part, that of a very young and very human lawyer, which the authors – thank goodness! – suddenly wrote into the middle of this alluring hotch-potch of quite trivial things.