In the 21st century, when it is considered oh-so-trendy for boys to dress up as girls, the trendy ones (and their directors) are inclined to forget or to ignore the really great age of female impersonation, a century and a half ago. It has all been done before, guys and gals. 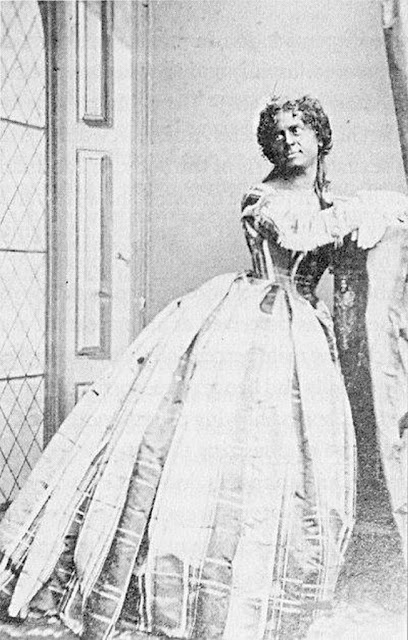 Probably the greatest of the performers of the genre came from the minstrel shows of America. These men didn’t mime to recorded tracks. They sang. Operatic selections and ballads. Without, of course, the aid of the microphones which nowadays can boost an underpar voice into a boom. The minstrel ‘prima donnas’ could throw off the Trovatore ‘Miserere’ or ‘Non più mesta’ in a fashion which were a pure facsimile of their white-faced female equivalents. Oh, of course, these were minstrels, so they were black-faced.

There were two men who excelled all others at the art: Francis Leon of the internationally successful Kelly & Leon partnership, and ‘Eugene’ (pictured above, and below) of the team of Eugene & Unsworth. 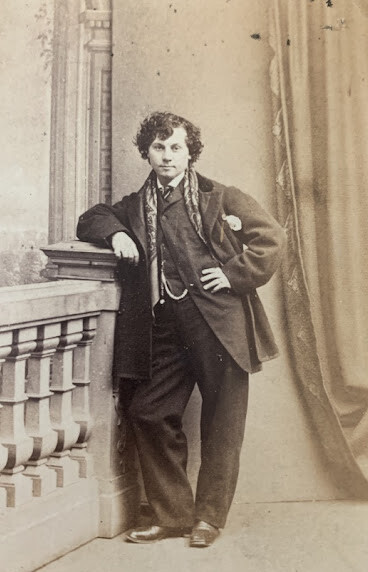 I was going to compile a biography of Eugene, but this is 2022 and anything perceived as ‘queer’ is à la mode, so other folks have got there before me. Here is one such at:

Eugene D’Ameli aka Theodore E. Ameli (June 4, 1836 – January 18, 1907) was acclaimed for his “delineations of female characters that were so finished, so true to life, that the Germans in Berlin during an engagement there in April, 1862, were emphatic in their declarations that he was a woman.” He and his partner, John Unsworth, appeared in principal music halls of England, France and Germany, creating a furore.

When “The Great Eugene” took the stage – and he took the stage always as a woman – men, in particular, seemed to find themselves singularly rapt in attention and admiration at the spell that the talented female personator was casting over them. The Great Eugene, otherwise known simply as Eugene, was named Eugene D’Ameli as a child. He was born in Manhattan on June 4, 1836, the son of an Italian confectioner, and, according to The New York Dramatic Mirror (the Broadway rag of the time), he made his first debut at the tender age of 17 in 1853 at Wood’s Minstrel Hall, playing what he would end up playing the rest of his career – a “prima donna” – a persona which “he improved and perfected until it was considered the best of its class.” His partner, “Johnny” Unsworth, of 700 Macon Street, recalled Eugene’s beginnings in the minstrel theatre. “Because he was so small and slight and built somewhat like a woman Gene started female impersonations, always in black face, as a minstrel show specialty.” In the San Francisco production of Uncle Tom’s Cabin, Eugene was cast as Topsy, and from all accounts he made a big hit with the part. The miners at times became so enthusiastic over his performance that they would throw gold coins and nuggets on the stage, all of them completely unaware that Eugene was actually a man. “He was,” Unsworth noted, “what, in those days, they called a ‘scream.’”

Eugene D’Ameli began with Wood’s Minstrels where he was joined by George Christy in 1853 and ended his career thirty years later with the Leon and Cushman Company in 1883. During his career, “Eugene” traveled with many different minstrel troupes throughout the US, Europe and Asia. He returned to America in 1868 and played with Bryant’s Minstrels in New York and with Hooley’s in Brooklyn. In May, 1884, he made his last appearance on any stage.

He was found, when off the stage, to be a neatly dressed and very good looking gentleman, somewhat under the medium size, but of “as fine a general figure in the manly attire of everyday life as he was in the gorgeous wardrobe of the sable prima donna at night.” He was, according to many, one of the most thoroughly artistic personators of burlesque female actors ever seen.

Never married, Eugene retired from the stage in 1884, after 31 years. For many years afterwards he was in poor health until, as his obituary noted, “he was attacked by dropsy.” He died in Brooklyn, N. Y., January 18, 1907.

At Eugene’s funeral, Unsworth recounted Eugene’s career, how they met, which minstrel groups they worked with, and how Eugene was singular in his “personations” of women. “You see, he even had a soprano voice down pat, besides looking the part,” Unsworth smiled through moist eyes. Then Unsworth told how he had cared for D’ameli morning, noon, and night in his final sickness, and how, in his dying days, he would sing to him the old minstrel songs they used to perform together. “I’ll tell you, son, I feel pretty lonely now that Gene has gone,” Unsworth said. It isn’t recorded how Unsworth mentally dealt with the passing of his partner, but it must have been tough for the old bachelor to see his dear friend pass. An occurrence 17 years later, though, may lend us a clue to his state – as well as to the importance Unsworth placed on his relationship with Eugene. When Unsworth himself died, he had left a will. In that will, everything he had owned went to a favorite niece of Eugene’s.

I guess that’s pretty correct, although I find him only as Ameli rather than d’Ameli. And the ‘favourite niece’, Elizabeth Jane Ameli, had looked after Johnny since Eugene’s death.

Here is a squib on the duo’s first appearance in Britain (1861): 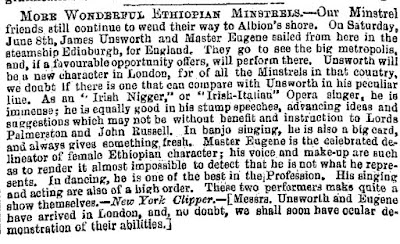 Are there two Unsworths?  YES!  James Unsworth died 21 February 1875 in Liverpool. Left everything to Eugene. ‘My brother John …’.  So its JAMES the minstrel. JOHN his brother. JOSEPH another brother …   Eugene shares a gravstone not with his longtime partner, but with that partner’s brother.

Another link with 2022 when Disney and Really Useful are vying to see which of them can murder the tale of Cinderella to the worst intent. Here is our boys’ version, well over a century earlier … 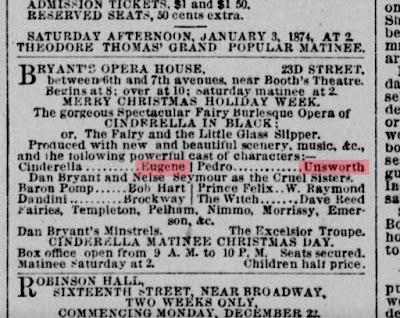 Interesting to note that the character of Pedro has already joined the cast list. Pedro is known these days as Buttons. So, here we have a black-faced travesty Cinders. Beat that, 2022.

And, good heavens, is that Walter Pelham as ‘a fairy’? 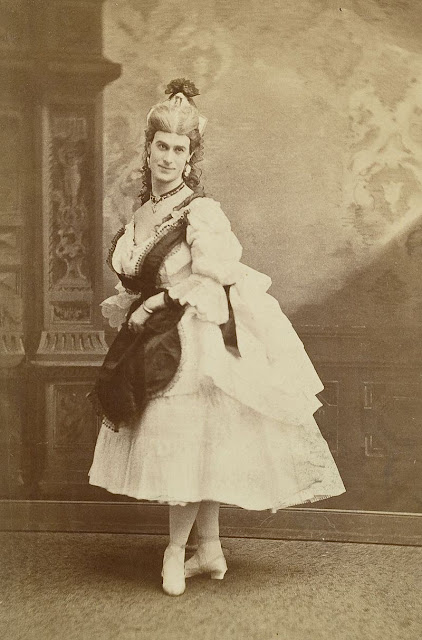