While many people know Viennese and French operetta, even Spanish Zarzuela and a few Italian titles, Greek operetta is not something most international fans of the genre are familiar with – except maybe Sidney Jones’ The Greek Slave, which doesn’t count. We spoke with Evi Nikita, who just wrote her PhD about Greek operetta, to get an introduction into this world. 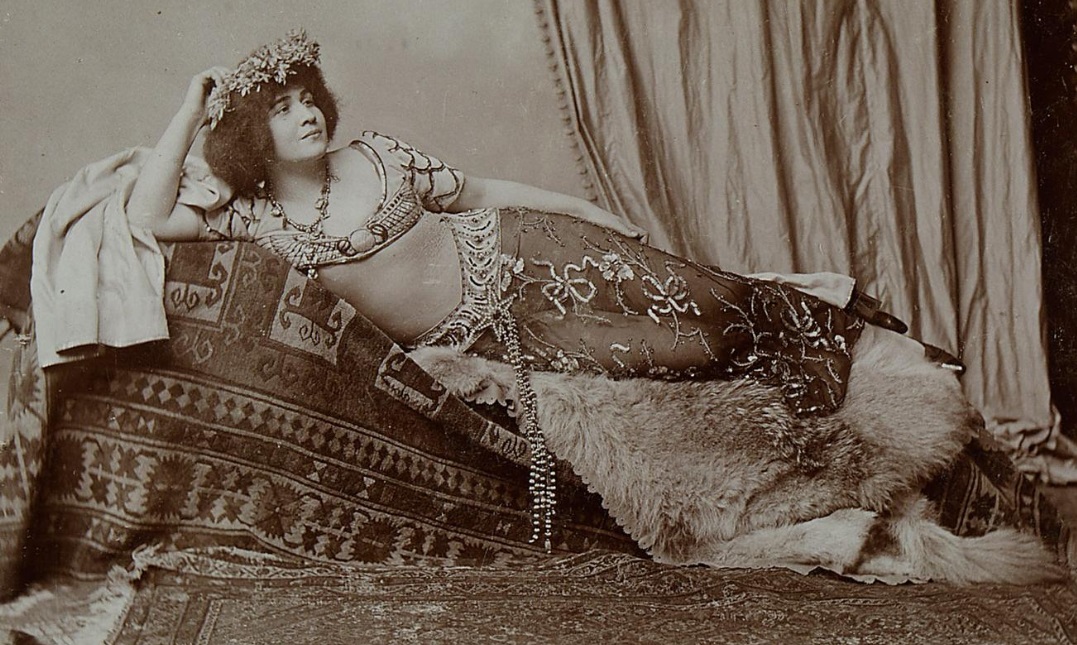 Can you share some basics with us: when and where did a unique Greek operetta tradition start up, why did it start, and what are the best-known titles?
The light musical theatre was introduced in Greece in the 19th century. The country, in its attempt to become a part of the Western world, follows Western European trends in theatre and other forms of entertainment. Operetta appeared in Greece in the mid-19th century and was initially performed exclusively by foreign troupes. Many of them incorporated opera and operetta into their repertoire and were granted by the Palace.

Since 1871, the European way of entertainment was gradually entrenched in the country. Operetta dominated the preferences of the audience, overtaking both opera and dramatic theatre. The arrival of operetta helped release theatre from its educational role, while establishing the presence of live music on stage.

Greek authors, seeing to break the dominance of French operetta, initially turned to the production of vaudeville, a genre which mixed popular music motifs and foreign melodies, with a purely “Greek” plot. At the end of the 19th century, Vaudeville was gradually fading away, while French and especially Viennese operetta dominated the preferences of the Greek public.

In the beginning of the 20th century, Greek theatre directors decided to compete with foreign troupes. Antonis Nikas staged Mamzelle Nitouche at Athens in 1908 and paved the way for the creation of a Greek operetta tradition. In May 1909, the first Greek operetta was produced. The operetta, entitled Thalatta-Thalatta (music composed by Theophrastos Sakellaridis and libretto written by Polyvios Dimitrakopoulos and Stephanos Granitsas) provoked reactions as its content offended the socio-political facts of the country.

However, Greek composers continued to produce operettas. Within the first great successes being the operettas In the Barracks (1914), created by Theofrastos Sakellaridis and the Modern Chambermaid, created by Nikos Hadjiapostolou (1916). During the 1920s and the 1930s, Greek operetta flourished and established itself in the preferences of the audience.

Some of the best-known operetta creators (librettists and composers) are Theophrastos Sakellaridis, Nikos Hadjiapostolou, Yannis Prineas, Zachos Thanos and Dimitris Giannoukakis. Among the most popular Operettas until today are Baptistikos (The Godson) by Th. Sakellaridis and Apaches of Athens by N. Hadjiapostolou. The operettas remain popular for their songs. Some of the best -known titles are the “Modern Chambermaid”, “Ririka”, “Sweet Nana”, “Daughter of Storm”, “Princess of Sassoon”, “Sataneri”.

Here’s a one-step from “Sweet Nana”:

Are these shows still performed in Greece today, and if so, who performs them (and who attends such performances)?
Nowadays Greek Operetta is revived by the musical and theatrical scene of the country. On an almost annual basis, productions are performed at the Alternative Stage of Greek National Opera, which constitutes the pillar of the country’s musical theatre, and at other cultural institutions such as the Athens Concert Hall, The Olympia Municipal Musical Theatre of Athens, the Thessaloniki Concert Hall and the Cultural and Conference Centre of Heraklion (Crete).

Alexandros Efklidis deserves a special mention, for regularly directing operettas in a contemporary way. Also, he focuses on operetta research, ensuring the restoration and preservation of manuscripts, while he organizes the program of the Alternative Stage. Such productions appeal to younger audiences, as well as the more mature ones that constitute the main fan base for operettas, as they recall the music and songs of an older era. 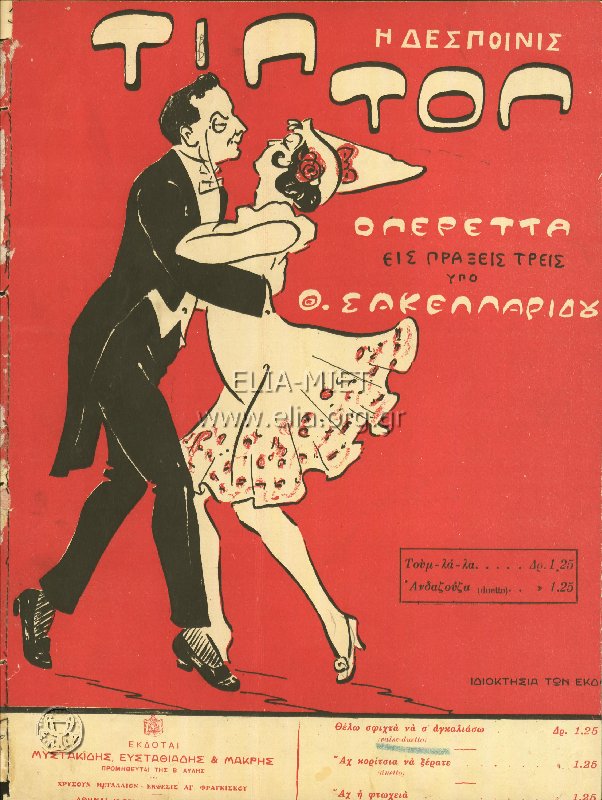 “I want to hug you tight”, duett from the operetta “Miss Tip Top” by Th. Sakellaridis. Front cover of the score, (Photo: Department of Performing Arts ELIA-MIET, MS.8.104, www.elia.org.gr)

Are there stereotypical stories that “classic” Greek operettas deal with? And what are these stories?
Love in all its forms! Typical examples are a couple in love, who may encounter difficulties but overcome them and manage to get married. Also, another typical example is that of mature men who have the desires to fall in love and live frenetically through the new way of entertainment introduced in the Greek interwar society, such as the cabaret and the dancing clubs.

Marriage represents the happy ending of the majority of Greek operettas. The themes that the operettas discuss are based on dipoles, with the most characteristic being the contrast between the lifestyle and habits of the upper and lower class (for example, wealth and poverty, the life of Athens and the life of the countryside, the new way of entertainment and the nostalgia for the glorious past).

Operettas in other parts of the world have been either about sexual liberation or a nostalgic view of the past. Is there a discussion of sexuality, modernism, and gender roles in Greek operettas? And is there, at the opposite end, also something like a desire for “the good old times” (as they never really existed)?
In Greek operetta, the sexual liberation of the heroes, the nostalgia of the old times and gender roles constitute typical topics that recur in the plays. Creators focus on gender roles and introduce the new dynamic that gradually evolves in the interwar society. Specifically, the will of the feminist movement to defend the female gender, to liberate the woman from being a housewife, evolving her role as a worker and as an independent person separate from her husband and her family.

In the operettas, we can see how the creators present this new tension through women who decide to change their lives. For example, through a young daughter who falls in love with a rich young man, leaves her poor family and runs away with him.

Women working in the entertainment industry, such as the theatre or the cabaret, as well as prostitutes, represent important characters. They constitute models of independent and emancipated women, or of women who have suffered and are struggling to survive.

The man in the operetta represents the leader of the family, the ‘savior’ of the woman, the one who socially re-establishes her through their marriage. Moreover, the contrast between the new and the old era constitutes a common theme. In the operetta, there is a comparison between the new morals of the interwar society, such as the way of entertainment in the dancing clubs or in the cabaret, and the old times which is idealized while the heroes feel nostalgic for the past. 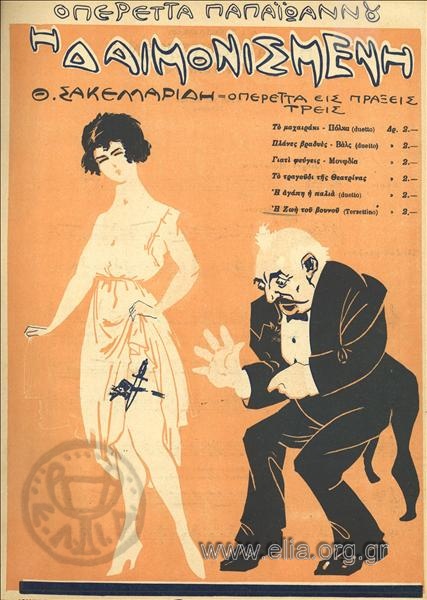 Is there any substantial scholarship on Greek popular musical theater? Who are the main researchers? What are their focusses? Are their books available in any language other than Greek?
No, there is no specific scholarship for musical theatre in Greece. However, students or researchers can apply for a scholarship to various institutions that sponsor researchers annually. Scholarships are granted by Greek universities as well as by foundations and institutions that aim at promoting research in Arts and Humanities. Musical theatre constitutes a field of scientific research by theater historians and musicologists, members of the university community and independent researchers. Their research focuses on general and specific issues of operetta’s components such as: themes, typology, music, dramaturgy, connections with drama and comparisons with the Shadow Theatre, gender and identity questions, performances, creators, actors, and troupes, as well as critiques in the Press. 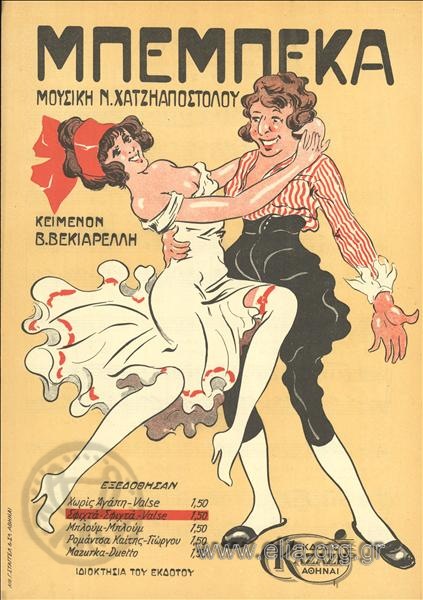 Researchers are equally interested in the preservation, digital conservation of manuscripts and musical texts, while the stage revival of the operetta is realized through a contemporary perspective. The first scientific essay dedicated to Greek Operetta and Revue belongs to Manolis Seiragakis (assistant professor at the University of Crete, theatre director and actor).

You yourself will start working as a schoolteacher soon. How much do young(er) people in Greece know about operetta? What’s the position of operetta next to musicals? Do the fans and scholars of musicals deal with operetta too?
The term operetta remains unknown to most young people today. On the contrary, the musical is more popular among both young and adult audiences of the country. In Greece, musical productions are not particularly frequent. Most of them are produced in Athens, fewer in Thessaloniki and rarely in smaller towns of the country.

In musicals, actors and singers are more well-known to the audience. Typically, musical productions constitute film adaptations or tributes to famous composers and actors of the country. Their audience does not necessarily attend operetta productions, as the latter appeals to a limited audience.

Where are the archives for Greek operetta, and where does one find the most important recordings?
The archives of the Greek operetta are scattered in private and public collections across Greece. Precious holdings are kept in Athens: at the Greek National Opera, the National Library of Greece, the Music Department of the Municipal Library of Athens, the Hellenic Literary and Historical Archive and the Great Music Library “Lillian Voudouri” of the Athens Concert Hall.

Here’s the trailer that the Alternative Stage of the Greek National Opera created for the operetta “Satanerie” by Th. Sakellaridis:

Important sources were found in the archive of Joseph Ritsiardis – one of the most important operetta composers – at the Philharmonic Society of Corfu, while scarce pieces are kept at the Institute of Mediterranean Studies in Rethimnon (Crete).

In Athens, there are two archives of great value for researchers of musical theatre: the private archive of Panagiotis Kounadis and the archive of the interwar theatre writer Dimitris Giannoukakis.

In addition, operettas are also preserved in the private archives of the creators of musical theatre, such as those of the composers Attik, Nikos Hadijapostolou and Xenophon Asteriadis, which are managed by the descendants of the creators. 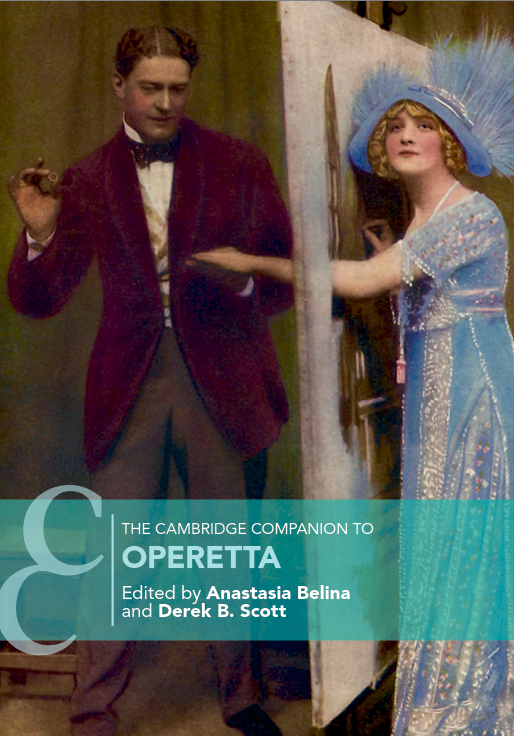 For more information on Greek operetta, check out the recent Cambridge Companion to Operetta, edited by Anastasia Belina and Derek Scott. There’s a chapgter dedicated to Greece.