It is with great sadness that we, at the Operetta Research Center, have to report the death of Charles Kálmán. He passed away on Sunday, 22 February, at the age of 85. He was the oldest child of Emmerich Kálmán, as well as a distinguished composer of chansons, musicals and revue operettas in his own right. Also, Charles helped research institutions like ours with his insightful and highly personal recollections of his own family’s history. 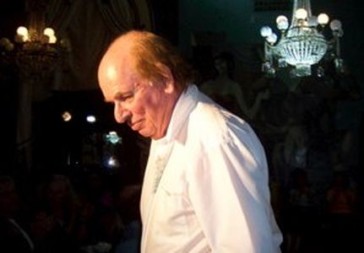 Karl Emmerich Fedor (“Charles”) Kálmán was born in Vienna, on 17 November 1929, the first child of Emmerich Kálmán and Vera Mendelsohn who had just gotten married a week previously. Growing up in the splendor of the Ringstraße apartment and later the villa in Döbling, Charles experienced the final glory days of the operetta industry in Austria, before it came to a crashing end in 1938 with the “Anschluss.” The Kálmán family, and their three children, fled to France, and in 1940 onwards to America. The teenager Charles Kálmán met many of the great authors and composers in these exile years, first in Hollywood, then in New York. He studied music in the USA, and because of his interest in music, had many conversations with his father about the business.

He later shared his recollections of the working relationship of Emmerich Kálmán and lyricist Lorenz Hart, who worked together on the Broadway musical “Miss Underground.”

When there were plans to reconstruct Miss Underground in the new millennium, Charles sat down with the designated stage director and played all the songs from his father’s sketches, making it possible – now – to actually reconstruct each and every one of Lorenz Hart’s seven last songs. (Miss Underground was never completed.) 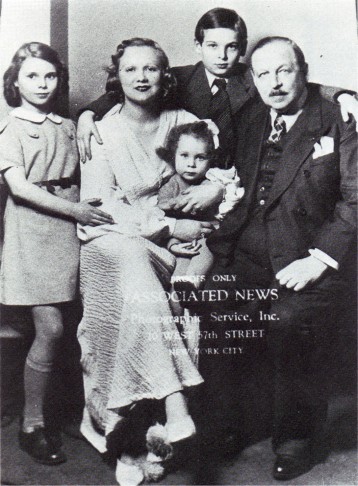 Emmerich Kalman and his family arriving in New York in 1940. (Photo: Yvonne Kalman)

On his return to Europe in the late 1940s, Charles helped finish his father’s last operetta, the cowboy spectacle Arizona Lady. It premiered, posthumously, on the Bavarian Radio in January 1954, then at the theater in Bern, Switzerland.

Together with his sister Elisabeth, Charles wrote various shows, Wir reisen um die Welt among others, and soon also film music (Fabian). One of the most notable productions involving his music was the musical version Der blaue Engel (The Blue Angel) at the Theater des Westens in Berlin, starring Ute Lemper. It was an ill-fated show because of the uninspired production and controversial leading lady. But it did not stop Charles from writing many more musicals in the years that followed. One of the most interesting was his one-person show Novecento, which was seen at the Gärtnerplatztheater Munich, in Vienna and in Plauen/Zwickau. 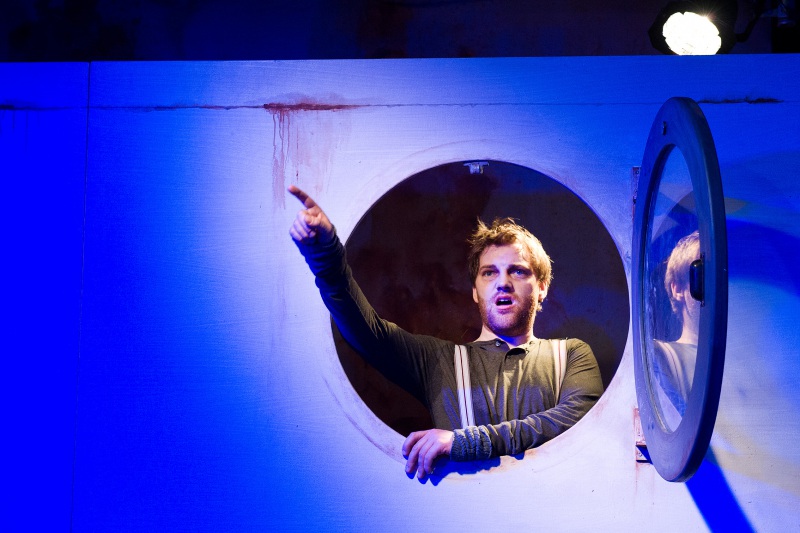 Scene from the “Novecento” production in Plauen/Zwickau. (Photo: Theater Plauen)

There is a great wealth of witty and charming chansons, but also song cycles such as the Else Laska Schüler songs.

Personally, I always loved hearing them most when Charles himself sang them with his highly characteristic voice and unique sense of comedy.

I met Charles through his publisher, John Schofield at Weinberger, who introduced us in order to make a radio program on Emmerich Kálmán. Being fascinated by Charles’s highly critical tales of his family’s history, which often contrasted with the narratives found in the books of his mother Vera, I asked him whether he would tell these “true” stories again for publication, to set the record straight. He agreed to this and taught me to question each and every single statement his mother Vera ever made, and to search for reliable historical evidence instead. The result was eye-opening, for me. It led to me writing the book Emmerich Kálmán und die transatlantische Operette, published in 2005 and dedicated to Charles Kálmán. 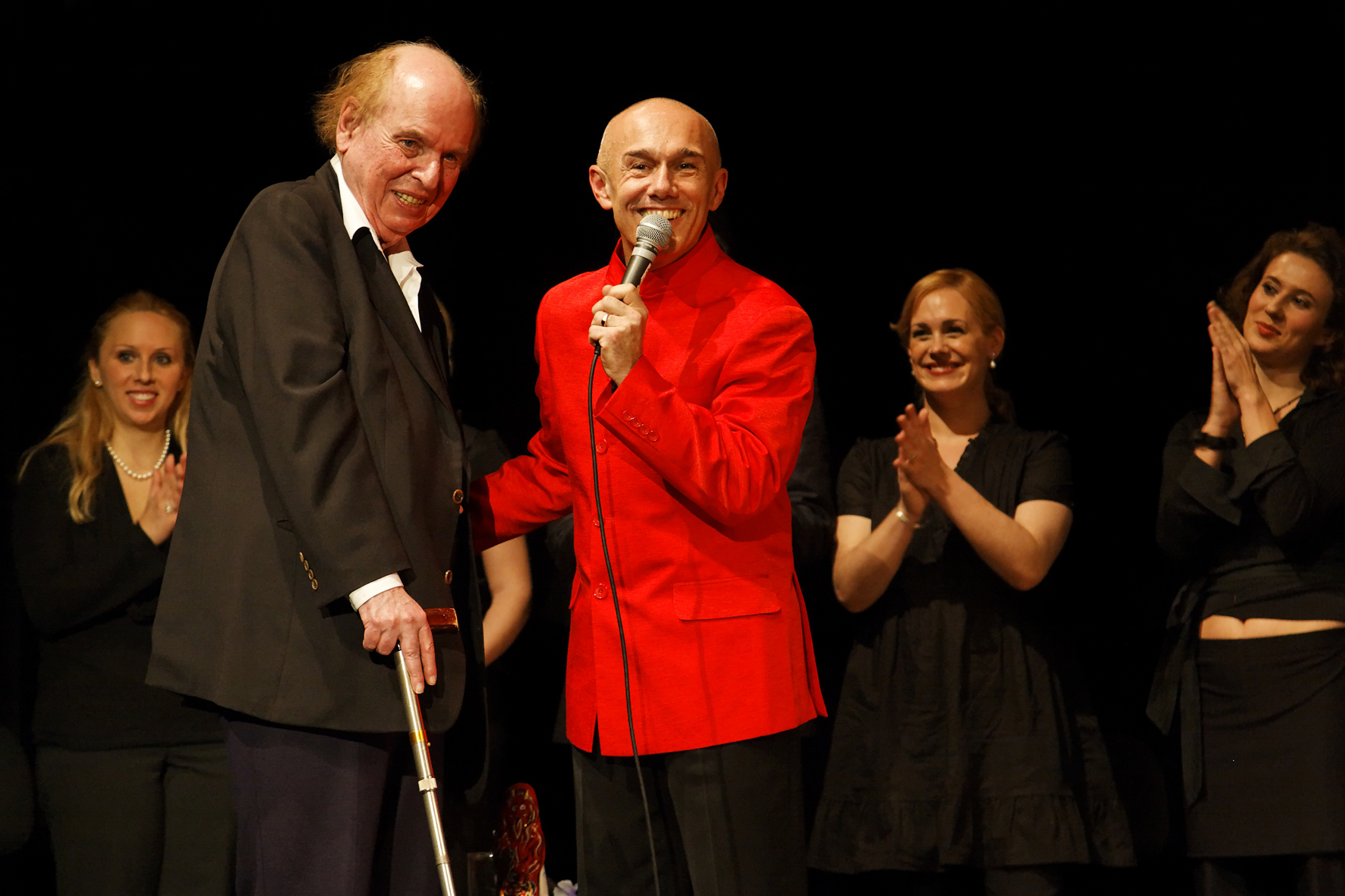 Having lived in Munich for many years, I will always recall those many dinners with Charles in which he told about his projects, played his songs, but also the songs of others, explaining why he thought they were great. He was a superb educator and a wonderful friend.

He composed to the very end.

Many of his latter orchestral compositions premiered in Switzerland and demonstrate the deep influence of American music, Gershwin and Richard Rodgers especially.

The last years of his life were spent in Munich, in a grand penthouse apartment on Maximilianstraße, and in the South of France, in Nice. In December 2014, Charles was awarded the Golden Medal of Honor of the Vienna (“Goldene Verdienstzeichen des Landes Wien”).

He will be sorely missed: as a friend, as a mentor, and a fountain of information, and a great composer of course. Out of the three Kálmán children, only Yvonne remains: the youngest daughter of Emmerich and Vera.

Tonight, there will be a special radio broadcast on Bayerischer Rundfunk honoring Charles Kálmán’s life and oeuvre, it is a program written by Stefan Frey, who also wrote the lexicon article on Charles for LexM (Lexikon verfolgter Musiker und Musikerinnen der NS-Zeit).