The world of science fiction is somewhat underexplored when it comes to operetta. Even though Offenbach famously wrote Le voyage dans la Lune in 1875 as a opéra-féerie of epic proportions, based on the Jules Verne novel From the Earth to the Moon. Two decades later, Paul Lincke created Frau Luna, one of the most enduring classics of the genre. Both shows are about utopian visions of a more liberated society. Which includes sexual liberation and liberation from traditional gender norms. Now, Christiane Rösinger presents Planet Egalia as “Ein feministisches Singspiel” at Berlin’s Hebbel Theater. 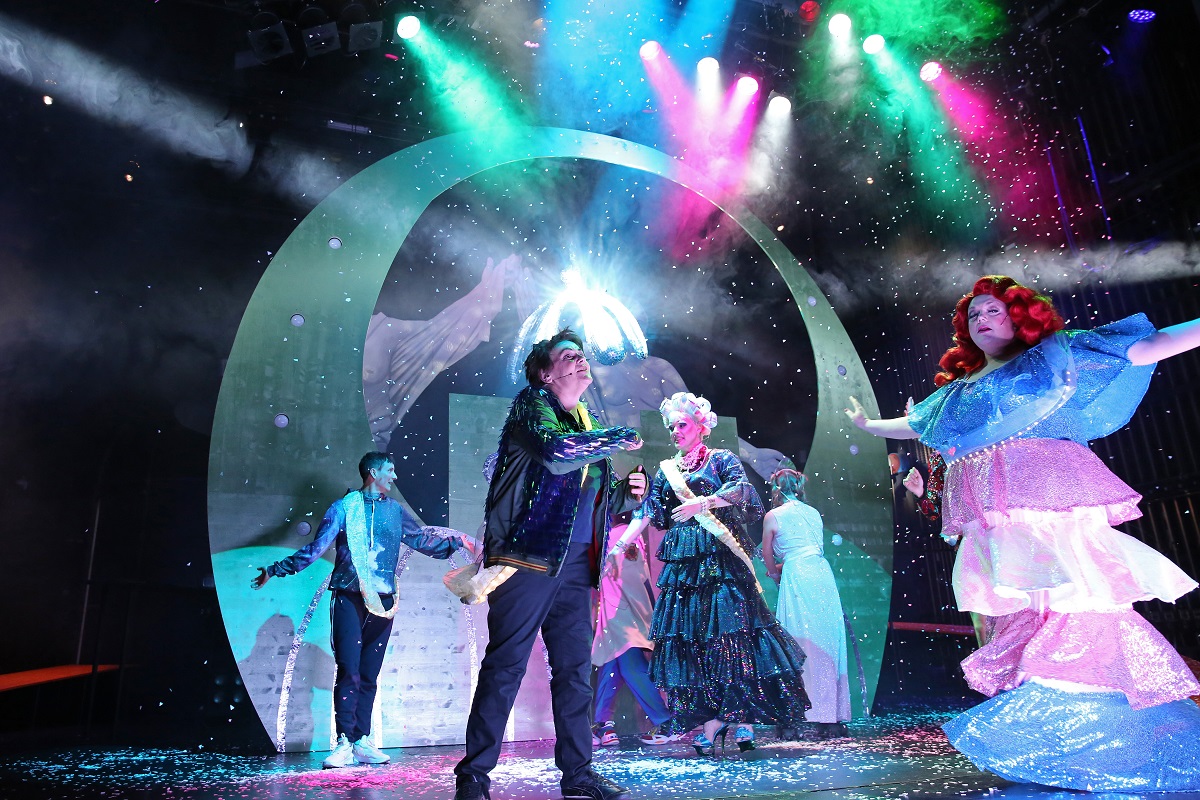 Christiane Rösinger (front left) in a scene from “Planet Egalia” at HAU/Hebbel am Ufer; on the right in a pink and blue dress: Kaey Kiel. (Photo: Dorothea Tuch)

It’s a parody of the patriarchy. And it shows a society on a planet, far far away, where women rule and men are the ones doing all the housework, raising the children, and basically taking orders from their wives. To stop their “disgusting” genitals from swinging around in full view, men are forced to wear a “PH”, a penis holder. And they lose their virginity as teenagers by being picked out at a coming-of-age party by (more mature) women who deflower them in special cabins. If the men are lucky, the women marry them and take care of them, if they are unlucky they have to battle for themselves … in badly paid jobs. (Rösinger had present her first “musical” at Hebbel in 2019, it was called Stadt unter Einfluss and addressed the housing problem in the German capital, one of the big red buttons in local politics.) 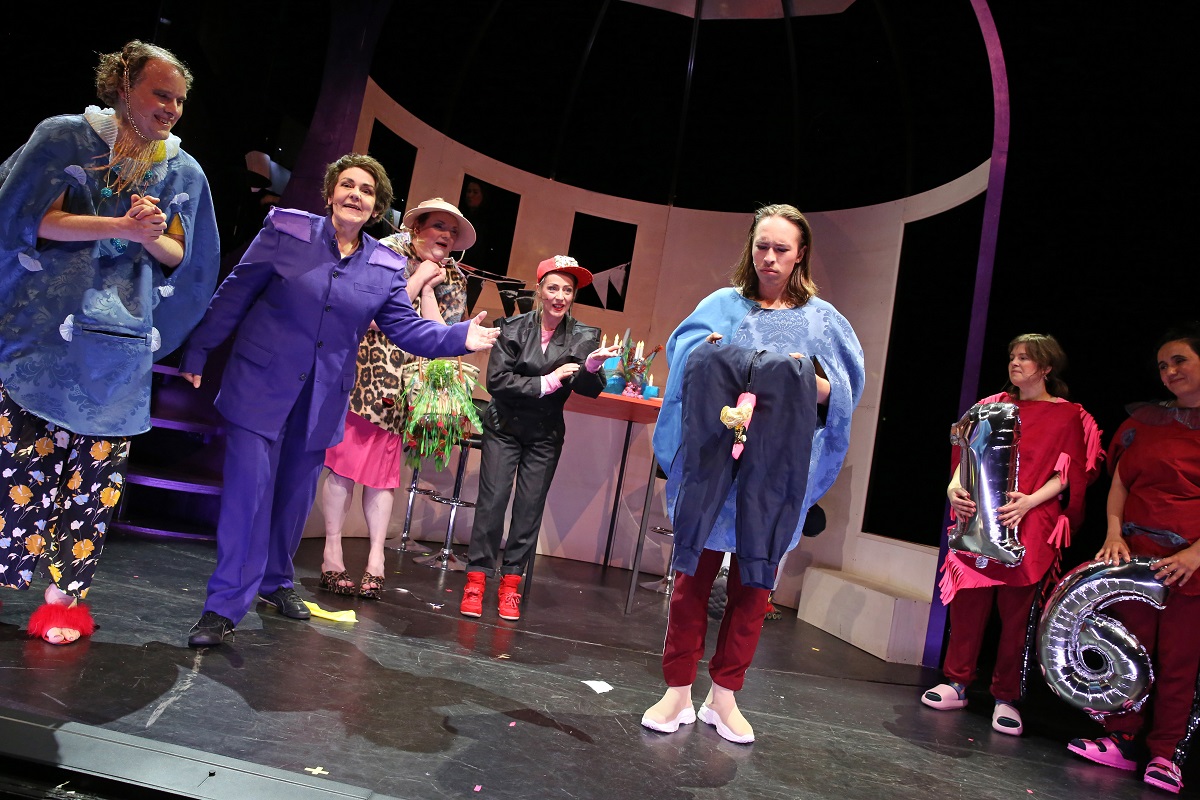 For his 16th birthday, the youthful “hero” of the story gets a diving suit with a “PH” for his penis. (Photo: Dorothea Tuch)

The new show presents a topsy turvy world based on the 1970s novel The Daughters of Egalia by Norwegian author Gerd Brantenberg.

The first edition of the novel “Planet Egalia.”

It’s a story very much suited for the grotesque exaggerations of operetta à la Offenbach and Hervé. But instead of making this trip to Egalia a fun experience full of mad-cap surprises and unexpected insights that make you reflect and reexamine the situation of women (and men), the “Singspiel” by Christiane Rösinger is never more than straightforward activism – with every line predictable. 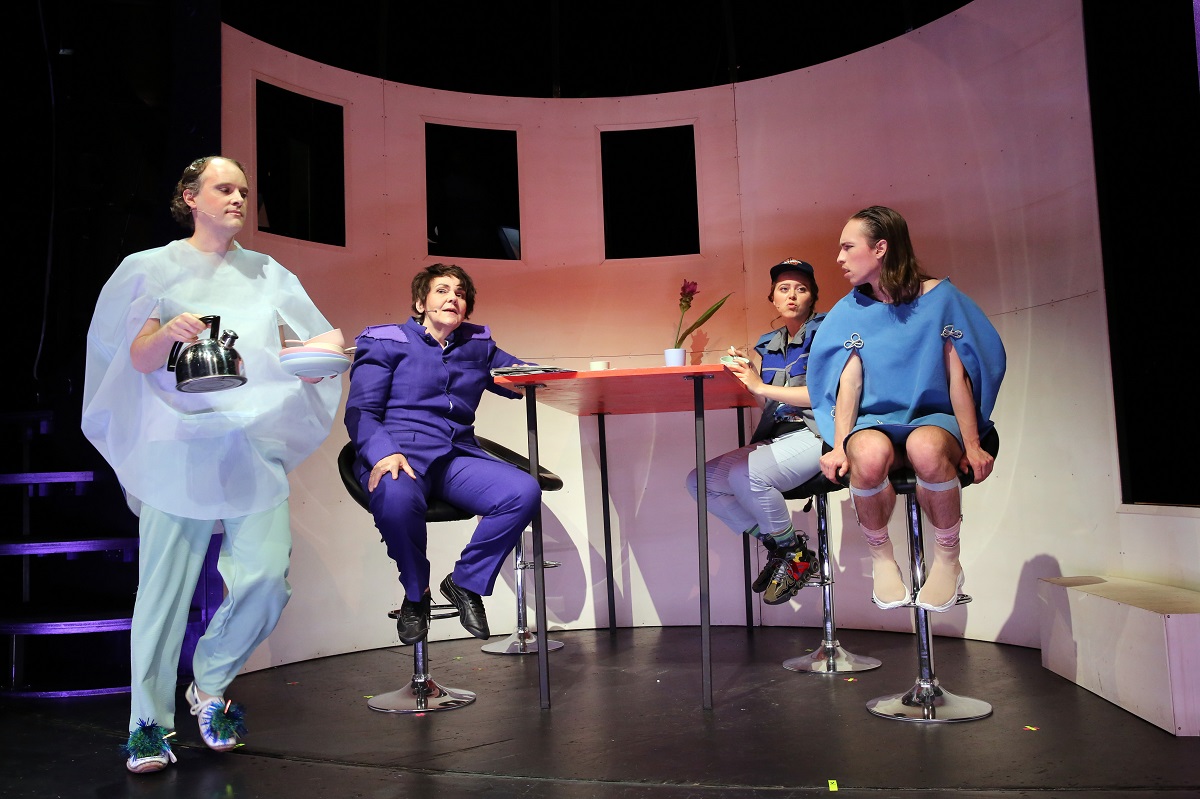 Domestic bliss on “Planet Egalia” with the men doing all the houswork and the women wearing pants. (Photo: Dorothea Tuch)

The evening reminded me of Julian Nitzberg, author of the 2006 political musical satire The Beastly Bombing: A Terrible Tale of Terrorists Tamed by the Tangles of True Love. He said: “Too often when people write political theater it is … unbearably dull, didactic or preachy. It even turns off people who agree with the author’s political views.” That can easily be applied to Rösinger’s version of Planet Egalia and the score she has written for it.

Add to this a cast that might, at best, be described as “trashy” amateurs, minus the John Waters humor. They deliver their lines with an almost incredible lack of bravado (or acting talent). Making it seem, at times, like a school play put on for adoring parents. In this case: it was Berlin’s young queer feminist scene that seemed to enjoy what it saw and applauded heartily at the end, with the actors on stage applauding back to the audience. It was like a communal ritual. Touching to behold. 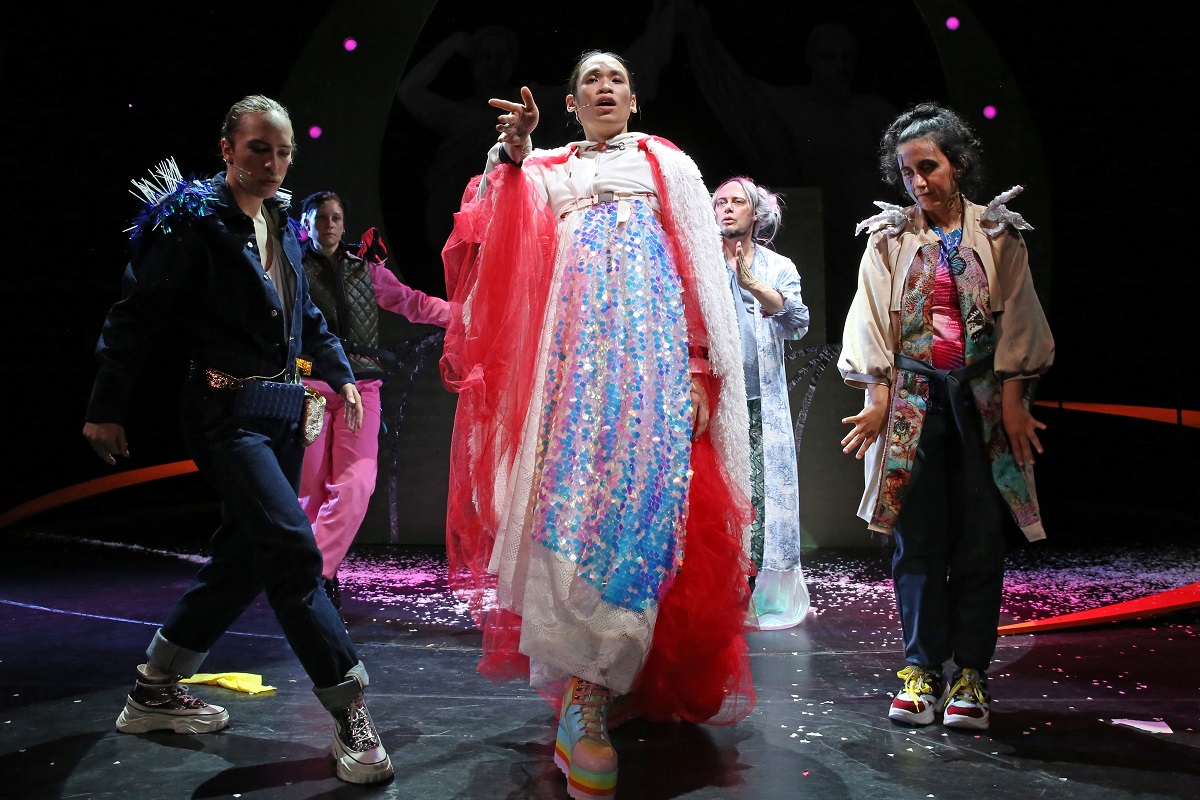 Preaching to the audience about gender equality and overcoming binaries: a scene from the second half of “Planet Egalia”. (Photo: Dorothea Tuch)

And the music? There was none of Offenbach’s musical subversiveness or energy. And none of Lincke’s catchiness. The songs – accompanied by a small band on stage under the direction of Laura Landergott and Elise Mory – sound “folksy” in a pleasant sort of way. There are a few choruses, but no bigger ensembles. And, just as with the acting there’s no bravado singing either.

My personal musical highlight was the moment when Rösinger – as the female ruler of Planet Egalia – gives birth as a public spectacle, and Kaey Kiel as mistress of ceremonies steps forward to lead the various choral interjections that reminded me of Offenbach’s hilarious “hymns” in Barbe-Bleue. Here, they were equally hilarious, but never steered to go over the top. Though Kaey Kiel herself went that way, and was a highlight. She also brought glamour to the production in a way that I wish more of her colleagues would have done. Kiel gets a big ballad towards the end, a kind of eleven o’clock number, that she presents with enormous emotional power. A bit like Berlin’s very own Adele! 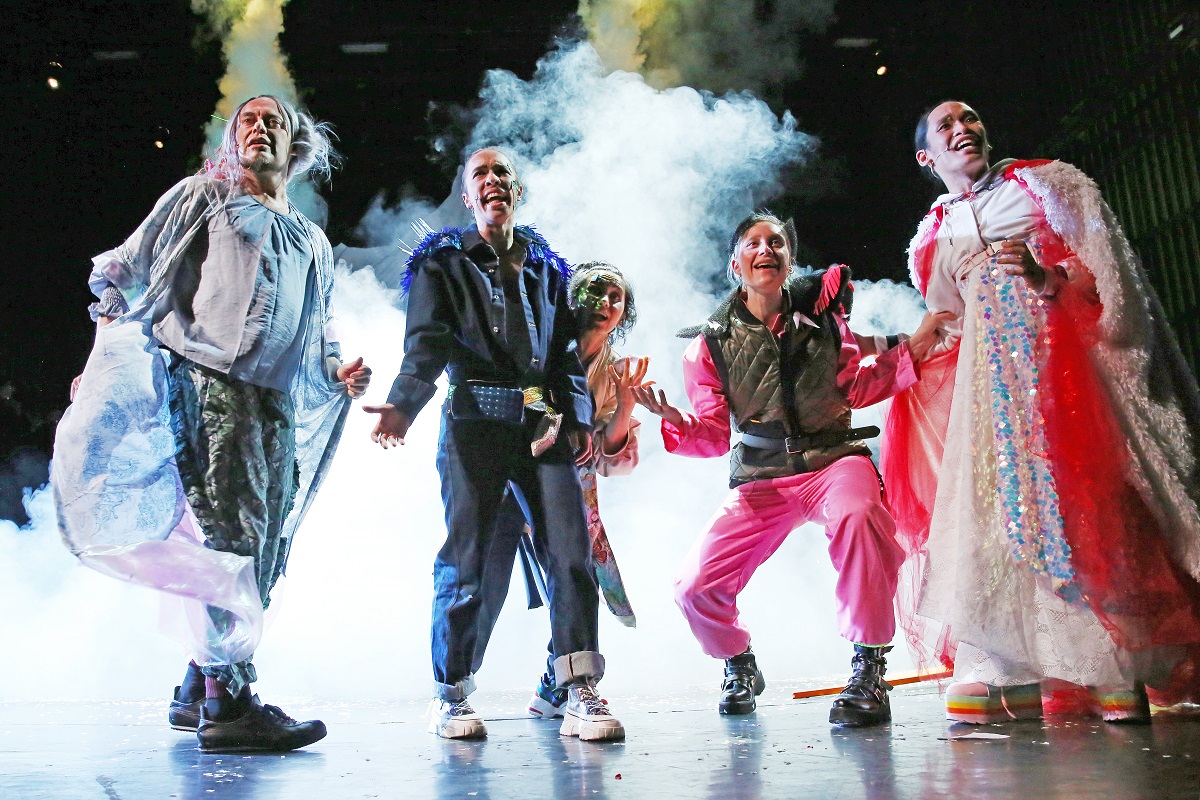 In that second part of the show all the characters travel to different planets and “learn” about alternative genders and gender roles, as practiced elsewhere. Again, the didactive simplicity of the script is staggering, the songs used charming but rarely memorable.

At the end, Rösinger tells the audience that we must overcome capitalism. Everyone should own everything, there should be no one working in traditional jobs. We should all be “free”. This comes 30 years after the collapse of the former DDR where such ideals had been turned into a farce. And a dictatorship. The people in the audience at Hebbel Theater might be too young to remember, but the version of “socialism” East-Germany experienced back then was not the blessing promised by Rösinger, who herself is old enough to know. Even if the position of women in the DDR – or other socialist/communist countries – was much more equal. But at what price?

Years ago, I saw a production of Wiener Blut at Hebbel Theater in which all roles were played by women, some cross-dressed to perform the male characters. It was one of the most memorable operetta evening of my life, and definitely a strong feminist statement that surprised the audience with wit and slapstick. The recent Frau Luna production at Tipi am Kanzleramt – with similar glitzy costumes and sets as Planet Egalia – also managed to get the feminist and LGBT aspects across in an intelligent way that continually surprised. 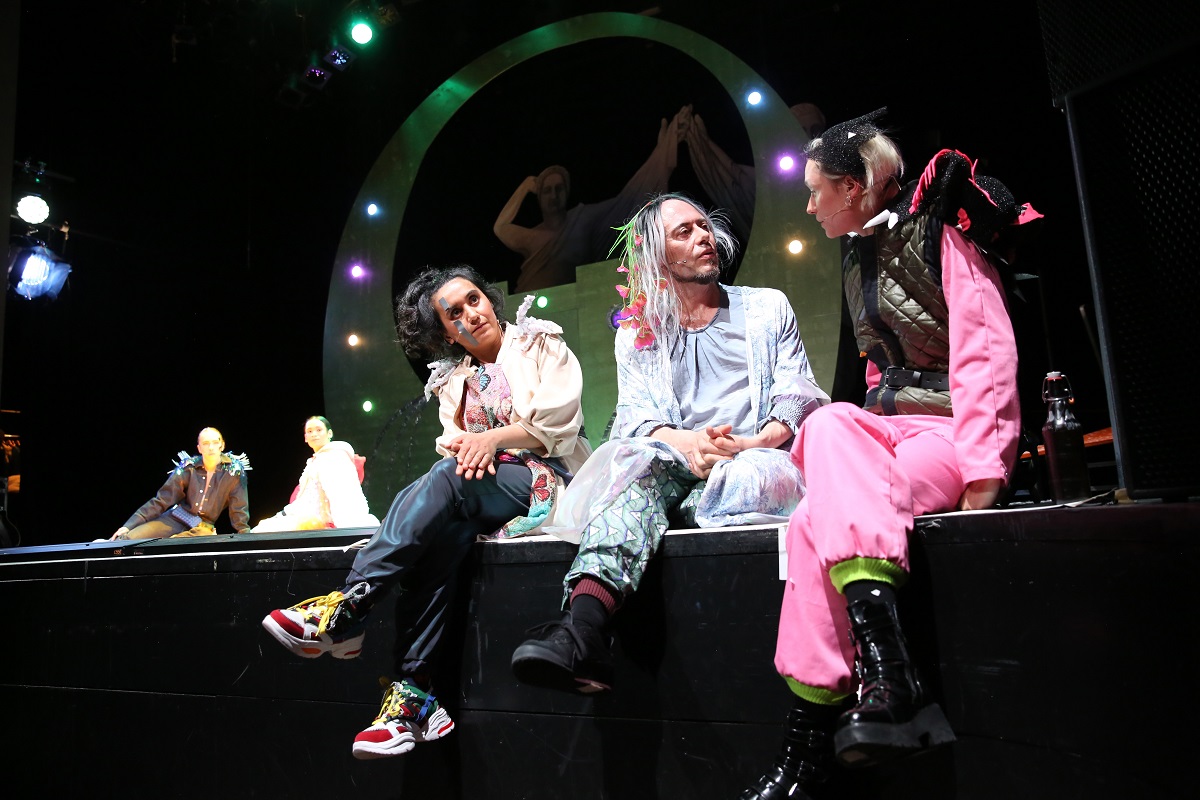 But maybe this sort of in-your-face anti-capitalist activism – that promises gender equality and sexual liberation once the evil production mechanisms of the world are overcome and property has been newly distributed – is what the young audience at HAU (Hebbel am Ufer) and performers on stage dream of as the best of all possible worlds? Well, we know how that ends in Candide.

The production with its political left-wing message is subsidized by the “Hauptstadt Kulturfonds”, i.e. Berlin’s left-wing senator for culture. Which is almost an operetta in itself, of Offenbachian proportions. Die Linke was founded in 2007 as the result of the merger of the Party of Democratic Socialism (PDS) and Labour and Social Justice – The Electoral Alternative. Through the PDS, the party is the direct descendant of the Marxist-Leninist ruling party of the former East Germany, the SED. (One could find a little irony in this.)

To return to science fiction and operetta: I doubt that this Planet Egalia as staged by Meike Schmitz (costumes by Sophia Sylvester Röpcke, sets by Marlene Lockemann and Sina Manthey) will have the staying power of Frau Luna, which premiered in 1899 just one block away at the lower end of Friedrichstraße, near Hallensches Ufer. At least there are English subtitles now (by Andrew Clarke) which Frau Luna didn’t have, neither in 1899 nor at Tipi.

Bottom line: the Hebbel Theater is an ideal venue for operetta, Kaey Kiel should definitely do more musical theater, and operettas set in outer space deserve more attention from producers and researchers. Because the battle for gender equality and sexual freedom is an important battle. A battle operetta has fought since the 1850s. Often in far more innovative ways than Christiane Rösinger. Which is a remarkable realization at the end of the evening.