Finding the best of all possible Candide recordings is hard. Because Leonard Bernstein’s eclectic work from 1956 – his only real “operetta” – has been rewritten and revised so often that there is an infinite number of (interesting) versions. 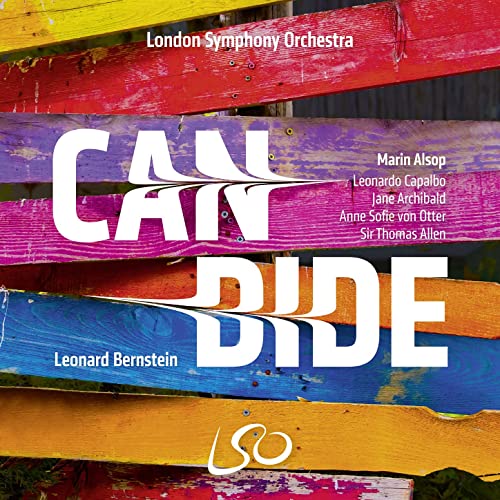 The LSO recording of “Candide” with Marin Alsop conducting.

On the new double disc, conductor Marin Alsop and the London Symphony Orchestra recycle the version that the New York Philharmonic had already presented with great success in 2004. There is a DVD of that semi-staged performance, but there are also many breathtaking excerpts on YouTube. Breathtaking because the cast includes musical comedy stars of the highest quality. First and foremost Kristin Chenoweth as Cunegonde, shortly after her Wicked triumph. She demonstrates how much this role benefits from perfect comedy timing and how important it is to act “Glitter and be Gay” in order to get the maximum effect out of this coloratura blockbuster.

Next to Chenoweth there’s the one-and-only Patti LuPone (Broadway’s first Evita) as the Old Lady. She puts on a battle of the divas with Chenoweth, in which the tatters fly. Paul Groves appeared as Candide back then, Sir Thomas Allen was heard in the dual role of narrator and Dr. Pangloss.

And Alsop conducted. I must admit I never noticed her because the soloists – especially Chenoweth / LuPone – overshadowed everything. So, here is Alsop once more with Candide. This time on CD.

Unfortunately, Alsop did not bring any musical comedy performers from the West End in for the two performances at London’s Barbican in 2018. Instead, we get a pure opera team. It once more includes Sir Thomas Allen as Dr. Pangloss / narrator, who doesn’t have anything new to communicate. Ultimately, he is also no comparison to Adolph Green who narrated in 1989 on the famous recording conducted by Bernstein himself for Deutsche Grammophon. On that recording there is a lot more music to be heard. And to be honest: next to Bernstein as conductor, Alsop just isn’t that memorable.

You already notice it in the overture, where the drive and courage for any kind of operetta grotesqueness are missing. No matter how much the conductor describes herself in the booklet as a close friend of the composer – she should have paid more attention to the way the master himself did it. And learned from that!

Leonard Capalbo is Candide, Jane Archibald sings Cunegonde, Marcus Farnsworth plays Maximilian, Thomas Atkins is the Governor and Anne Sofie von Otter sings the Old Lady at the Barbican. They all sing well. But there is nobody of such outstanding personality that I would want to buy this new Candide CD immediately.

Those who don’t like “Glitter and be Gay” à la Chenoweth but prefer the role interpreted by a legit opera diva can better stick with June Anderson. She sings the coloratura cascades with an extra exaggeration and self-persiflage that Archibald completely lacks.

Of course Archibald hits all the notes, but the fun factor is missing (acoustically). And that doesn’t just apply to the aria, but to the entire show as heard on CD here.

Capalbo lacks the honeyed innocence of an ideal Candide. Robert Rounseville on the original recording from 1956 is still unsurpassed in his youthful optimism. Irra Petina is also unmatched as the original Old Lady. Even in comparison to Christa Ludwig (1989), von Otter seems merely passable, without any particular attention paid to the witty lyrics. Some will remember her in the Barrie Kosky production at the Komische Oper Berlin, where she also remained pale. And I’m saying this as a huge von Otter fan!

There are memorable recordings of the various past Candide versions: the 1974 Harold Prince production on Broadway, the New York City Opera version of 1982 (no, not with Beverly Sills as Cunigonde, but with Erie Mills ), there is a recording of the successful version of Scottish Opera (1991 with Marilyn Hill Smith as Cunegonde, Ann Howells as Old Lady and Mark Beudert as a wonderful Candide), there was another Broadway production in 1997, which is available on CD with the impressive Jason Danieley as the title character, and then there is a recording of the Royal National Theatre production (1999 with Alex Kelly as the spectacular Cunegonde and Daniel Evans as Candide).

The aforementioned semi-staged performance with the New York Philharmonic Orchestra 2004 can be found on Blu-Ray. And yes, the Deutsche Grammophon recording, along with the original Broadway cast album (with the young Barbara Cook as a definitive Cunigonde), continues to set the standard.

Compared to all of the previous recordings, the new LSO recording is simply not individual enough to arouse real interest.

It’s a shame that after so many years a new Candide recording comes out, and the next generation of artists has absolutely nothing novel to say about the score. Obviously neither does the conductor. The new West Side Story soundtrack for the Steven Spielberg film is a good example that there is another way. Rachel Zegler and Ansel Elgort (known from Baby Driver) as Tony / Maria create an emotional directness that is new and fresh. Ariana DeBose sings “A Boy Like That” as Anita so aggressively and dramatically that the listener will be blown away, thinking he’s never heard it like this before.

And Rita Moreno demonstrates that you can deliver a touching version of “Somewhere” even without a voice (Moreno played Anita in the 1961 film).

In addition, there’s Gustavo Dudamel conducting. Together with Spielberg’s sound engineers he offers a cleverly re-balanced reading of the overfamiliar score, which has been adapted by David Newman (John Williams acted as an advisor, which you hear, in the best of all possible ways).

Overall, this version is exemplary. Because: if you release a new recording, then it should have something new to say.