This Musical triumviretta in 1 act was adapted from J Maddison Morton’s farce Box and Cox by F C Burnand, and it mad music by Arthur Sullivan. It premiered at the Adelphi Theatre, London, on 11 May 1867. 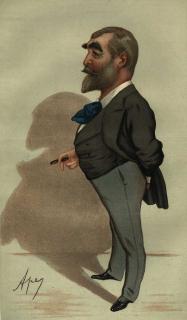 A drawing of Francis C. Burnand from “Vanity Fair,” 1881. (By Carlo Pellegrini)

One of the most successful of the short musical plays written in Britain in the wake of the success of the little works of Offenbach, Cox and Box was apparently the result of Sullivan’s attempting to produce a little piece on the lines of Offenbach’s widely-played hit Les Deux Aveugles.

Burnand adapted the script from Maddison Morton’s frequently performed comedietta (itself, allegedly, a version of the French Une chambre à deux lits), and the first performances of the little three-handed comedy musical were given in private by the society amateur group, the Moray Minstrels, with George duMaurier as Box, Harold Power as Cox and a Mr. Fo[r]ster as Bouncer. “Sullivan played the piano behind a door, where I [Burnand] also prompted”. 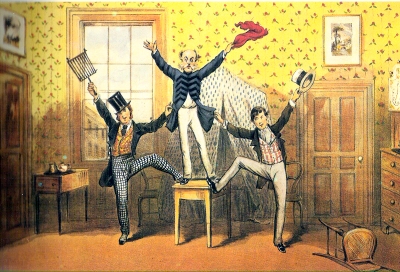 The playbill for the 1869 production of “Cox and Box” at the Royal Gallery of Illustration. Arthur Cecil played Box, German Reed played Cox, F. Seymour was The Bouncer.

The time and place of this first performance is much argued by Gilbert and Sullivan scholars, but Burnand went on record placing it at his own home, 102 Belgrave Rd, and clocking the hour as … 11pm! There is, however, no argument over the fact that Cox and Box got its first public performance at a benefit concert at the Adelphi Theatre. Mr. Bouncer (Arthur Cecil) has rented the same room both to the hatter Mr. Cox (Quintin Twiss) and the printer Mr. Box (George du Maurier), since one works at night and the other in the day. Inevitably, one day, the two coincide and, after the hard words have flown, they find they have a common interest in one Mr.s. Penelope Ann Wiggins.

Their interest is to avoid her and, at first, each tries to force the other to take the lady off his hands until news comes that she has drowned and left her fortune to her intended. Then both are less anxious to disclaim her. But Penelope Ann has not drowned. She is heading for London to find Box and/or Cox with the news that she has married Knox. Cox and Box delightedly discover that they are, by the laws of the dramatic theatre, indubitably long lost brothers and they decide to share the wretched Bouncer’s room.

The songs of the piece included a ‘Rataplan’ piece for Bouncer, reminiscing interminably over his days in the military, a ‘Lullaby’ for the snoozy Box, and a serenade, ‘The Buttercup’, to help pass the time.

After its Adelphi Theatre performances, Cox and Box was put on the program at the German Reeds’ Gallery of Illustration with Reed (Cox), Cecil (Box) and J Seymour (Bouncer) in the cast. It was played on a double-bill with W S Gilbert’s No Cards and, later, with Ages Ago, for an entire year.

In contrast to these intimate surroundings, it was also played as part of the program at the vast Alhambra Theatre with the composer’s brother, Fred, playing Cox, and later on seen on several occasions at the Court Theatre.

It was ultimately taken into the repertoire of the D’Oyly Carte companies and played at the Savoy as a forepiece to The Chieftain, becoming – in spite of not being written by Gilbert – accepted thereafter as part of the Savoy canon. 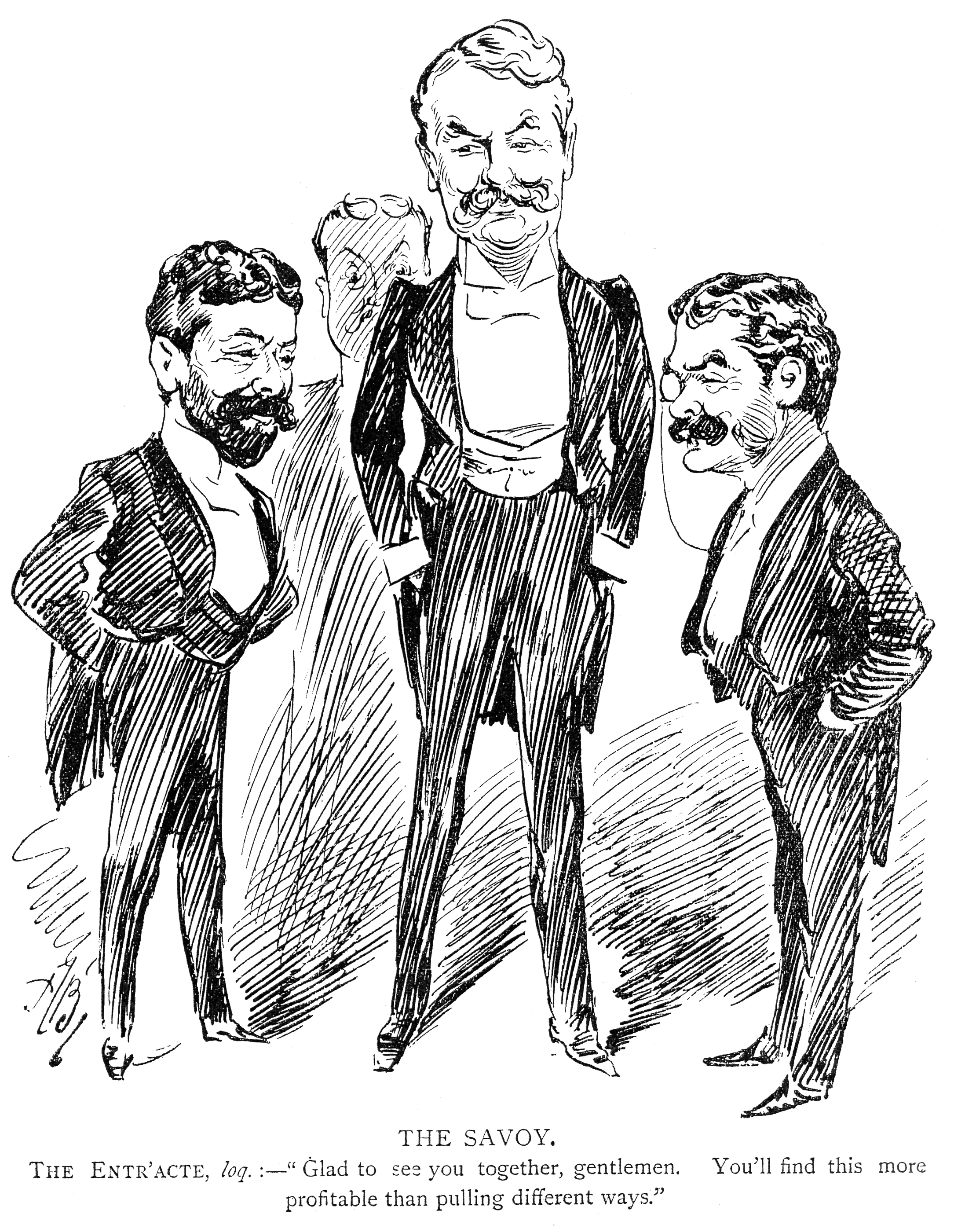 The piece won other English-language performances following its London success, being first mounted in Australia as part of a ‘Gallery of Illustration’ program given by Alice May with Edward Farley (Cox) and Howard Vernon (Box) featured. Offenbach’s The Rose of the Auvergne and a local extravaganza The Belle of Woolloomooloo made up the program. It is said to have been played for the first time in New York in August 1875 (though I can find no report of this performance) but Broadway’s Lyric Hall saw some kind of a performance as part of ‘Mr. H Galt’s Entertainment’ in December of that year, and, in the wake of the success of HMS Pinafore, when producers were scrambling to find anything by Gilbert and/or Sullivan to decorate their bills, the Standard Theatre hosted it as a forepiece to Pinafore as played by Thomas Whiffen (Box), Hart Conway (Cox) and Charles Makin (Bouncer).

Many another touring musical troupe included the show in its repertoire in the last days of the 1870s, but it seems that the first ever performance in America was very probably the one staged by Susie Galton’s English operetta troupe in San Francisco in March 1874, with John Howson as Cox, Alfred Kelleher as Box and Miss Galton playing Mrs. Bouncer. The operetta shared a program on this occasion with a performance by the California Minstrels.

Both British and other English-speaking stages, later hosted Cox and Box principally as a forepiece to the shorter full-length works of the Gilbert and Sullivan repertoire.