When I was about eight years old I have vivid memories of my mother doing the housework, continually singing “Oh, My Papa, Oh My Beloved Daddy,” which had recently been released as an Eddie Calvert trumpet solo. Years later I discovered that this song came from a stage work, Das Feuerwerk (1950) by the Swiss composer Paul Burkhard, with libretto by several hands including Robert Gilbert and Erik Charell. An English version was staged at the Bristol Old Vic (1957) followed by a London run at the Garrick Theatre, where it starred Peter O’Toole (he was convicted of being drunk and disorderly following the first night). It lasted all of 45 performances as the critics hated it: “To have to listen to that theme song bellowed over and over again is this reviewer’s idea of torture,” wrote Milton Shulman. 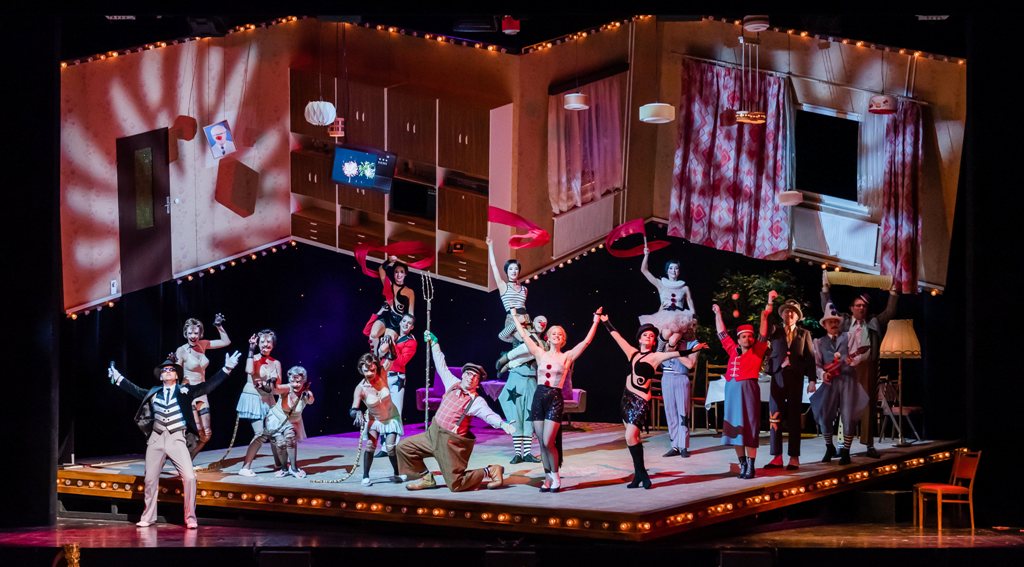 The ensemble of Musikalische Komödie in the dream sequence of act 2 of “Feuerwerk.” (Photo: Kirsten Nijhof)

Sixty years after first hearing “that song” I was sitting in the Musikalische Komödie Leipzig watching a new production of Feuerwerk, and must say that it gave me one of the most enjoyable evenings I have ever spent in a theatre.

Ultra-conservative industrialist Albert Oberholzer’s family gather together to celebrate his 60th birthday of the man who produces garden gnomes – Gartenzwerge. In Germany they are considered the epitome of petty bourgeois life. Suddenly Alexander (Hinrich Horn), the black sheep brother, turns up, whom no one has seen for over forty years, since he ran away to the circus. He is now a successful circus manager, and arrives complete with wife, Iduna. He tries to persuade Anna, Albert’s rebellious daughter, to join his circus, her aunts and uncles being suitably shocked, as is her petty bourgeois boyfriend, Robert. The second act contains an extended ‘dream’ sequence, in Charell’s hand presumably very spectacular at the world-premiere at Munich’s Gärtnerplatz Theater, in which Anna appears as the central character, imagining what might happen if she runs away, with her uncles appearing as clowns and her aunts as lions. 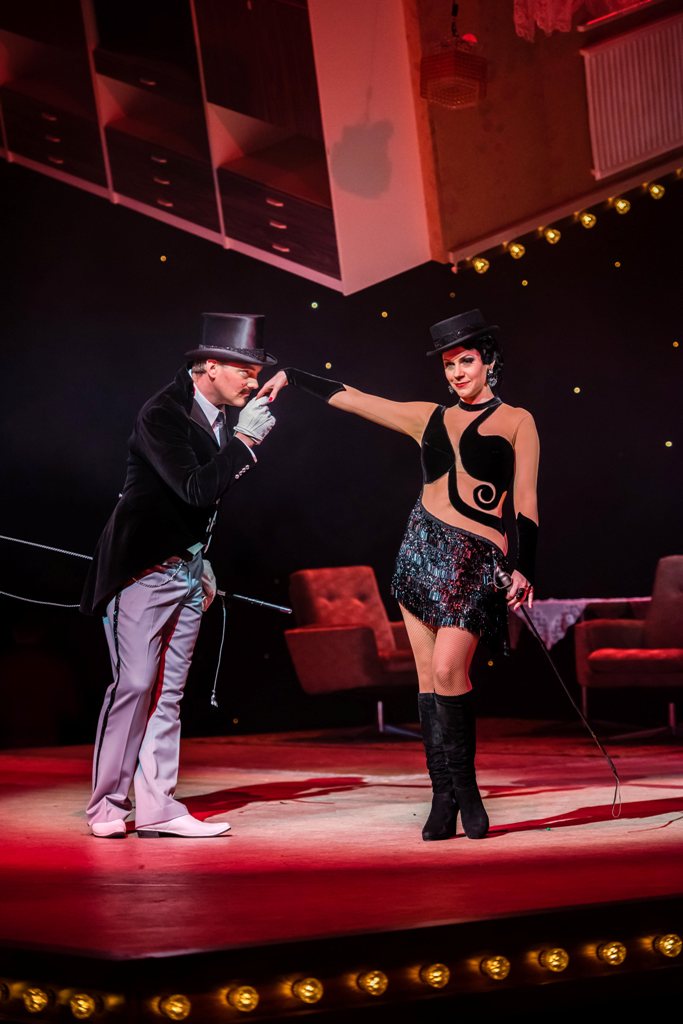 There is a lot of music, much of it of a high order, in this show: not just songs but several extended musical sequences, the longest of which in Act One is twenty-five minutes, and that is not even the finale. And we don’t hear “Oh Mein Papa” that much!

The most amusing song is that given to Uncle Gustav (Radoslav Rydlewski). His teacher used to say “His Latin is poor but he coughs well,” as he demonstrates in the song “In meiner Jugend schon war ich …” As with the whole cast, this singing – actor gets the required style beautifully – slightly caricaturing but always being believable in role, and very funny: the audience waits for his next cough! 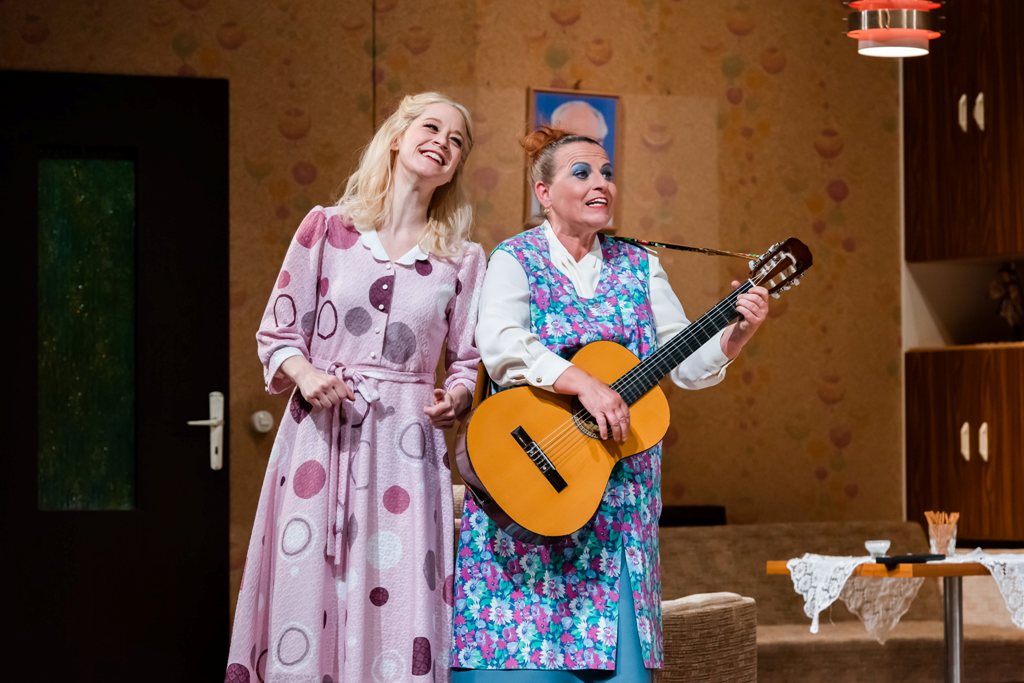 Nora Lentner impresses as youthful Anna. In the first act, she and the cook (a hilarious portrayal by Sabine Töpfer) rehearse and perform a birthday duet. But every time they reach the same place in the song one of the guests rings the door bell – even when there are no more guests! In fact we never hear more than the first verse of the song.

Sabine Töpfer is very amusing taking her frustrations out on the way she plays her guitar. 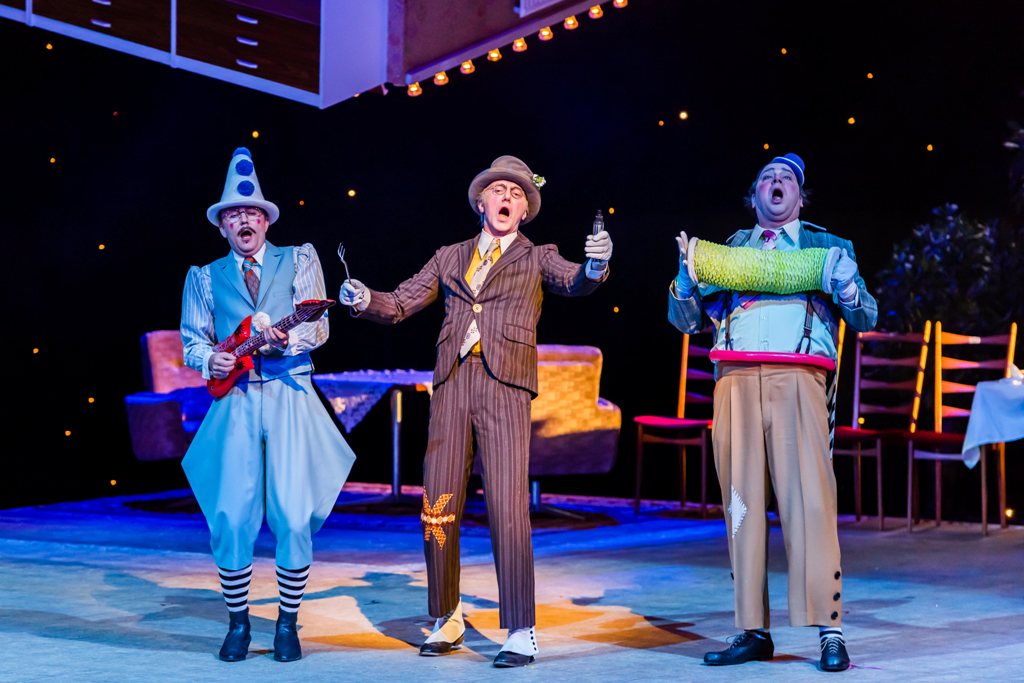 In the Circus sequence, Anna is called upon to sing whilst being hung upside down for several minutes as well as being swung round and round by her legs. She clearly has circus and dancing skills as well as acting and singing ones!

Other members of the wonderfully talented ensemble who really impress include Anne-Kathrin Fischer as Aunt Paula, who seems to be the embodiment of the British Brexit politician Anne Widecombe, even down to the walk – she even talks (in German) like AW and produces the same facial expressions of shock and horror, especially when her husband Gustav decides to leave her and join the circus. It’s an unheard of and belated “coming out” that Erik Charell cleverly inserts in the story at the very end. As an alternative to Anna not running away, but staying with Robert and the gnomes.

Ruth Ingeborg Ohlmann, as Iduna, is called upon to look stunning, which she does, getting the uncles to fawn over her, much to their wives’ chagrin.

Hinrich Horn has the appropriate stance for a circus Ringmaster and Angela Mehling and Michael Raschle are very amusing as Mother and Father Oberholzer. Justus Seeger, as boyfriend-and-gardener Robert spends most of the time being annoyed and suffering from love! 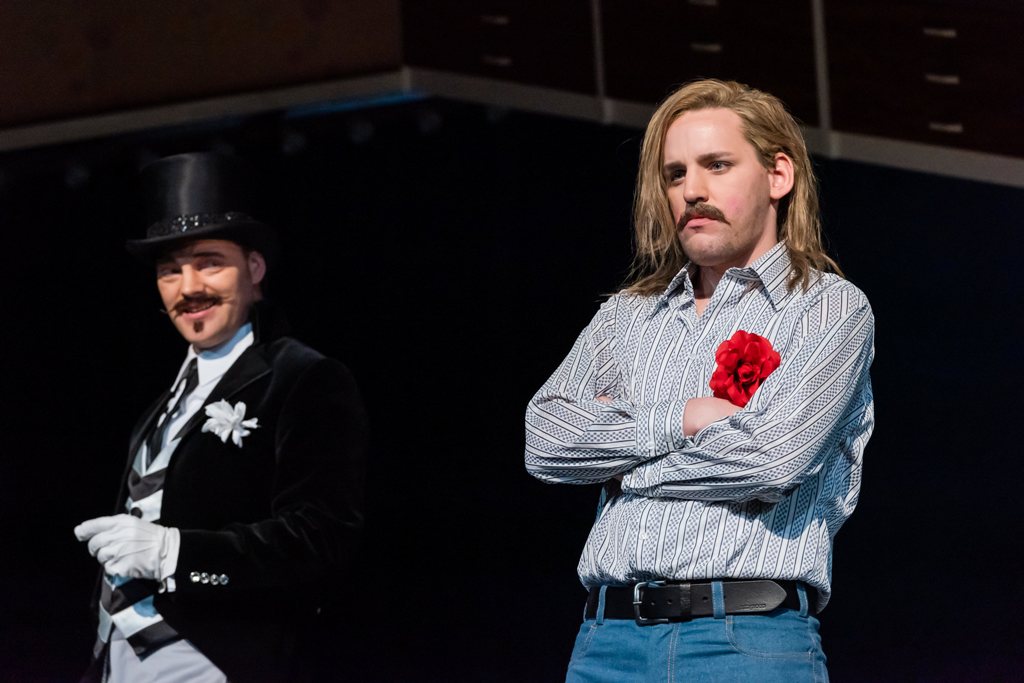 The skilled director of this production is Axel Köhler. He decided to set the story in Leipzig on the eve of the “implosion of the DDR” (as the program notes explain), so we see, on a raked rectangle, the living room of a typical successful East German business man in 1989. There is a television on which, as the audience enters the auditorium, are ‘live’ pictures of the Leipzig demonstrations taking place at the same time – until Uncle Heinrich (Andreas Reiner) comes in with his timid wife (Dagmar Zaromska) and immediately turns over to … football, which, as my father would have done, he watches until he is forced not to. They are not the most sociable of people!

It is also one of those houses where the TV is left on (mute) most of the time, even when no one is watching. But it does add to the atmosphere of the birthday party. 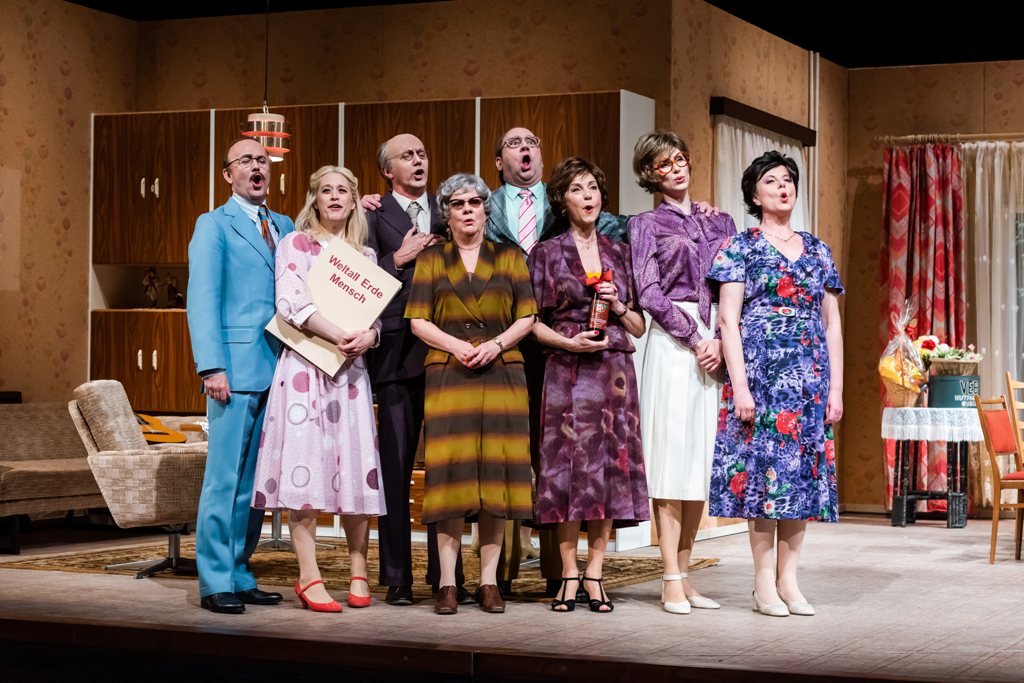 The set by (Okarina Peter and Timo Dentler is very convincing with great attention to detail, as are the costumes designed by the same team. We are quickly transported back to the year 1989, and the contrast between the rather fraught party on stage, and what is going on in Leipzig and East Germany at the same time is made very clear, and the poignancy of the show is highlighted by the fact that throughout it is extremly funny. In fact I had to change seats at the interval because the laughter around me was so continuous, from a surprisingly young audience, that I had difficulty in following what was going on!

The Circus dream sequence in Act Two was as spectacular as the current limited facilities of the theatre allowed it to be – and certainly brought a gasp and well-deserved applause from the audience as the entire set, minus the floor was flown complete about 3 metres and left hanging at what seemed a very precarious angle so that the circus itself could take place on the raked stage. Here, the 12-strong ballet of the Musikalische Komödie was used to great effect as were the cook, uncles and aunts: all, in Anna’s dream, in the circus roles she would envisage for each of them, the aunts as lions being the most effective and amusing!

I enjoyed this production very much indeed. All involved had got it just right, and I want to see it again!

Milton Shulman’s 1957 Evening Standard review which I quoted at the top of my article goes on to say “Grimly dedicated to charm … like so many thick slices of liverwurst … the lyrics and book have about as light a touch as a panzer division in full retreat.” I can only say that I strongly disagree – the production I witnessed was wonderful in every respect! Unfortunately you cannot go to see it next season, as the company is moving to Westbad for a year whilst the present theatre receives a much-needed make-over.

Paul Burkhard himself conducted an LP of highlights, but this really gives little idea of the work, being just 40 minutes of individual songs rather indifferently performed and recorded. Far better is a DVD starring Lilli Palmer, directed by Erik Charell himself and offering the young Romy Schneider as another special bonus.

There was an EP (remember those?) of some of the songs from the 1957 Bristol production of the show in English. If anyone reading this has a copy, I should love to hear it!