The show title Abenteuer im Spielzeugland might not directly ring a bell. But if you translate it into Babes in Toyland it probaly does. The theater in Plauen-Zwickau is presenting the Victor Herbert classic as a first German production ever, in December 2019 at “Neue Welt,” as a Christmas spectacle. The new translation and version is created by André Meyer and Jürgen Pöckel. 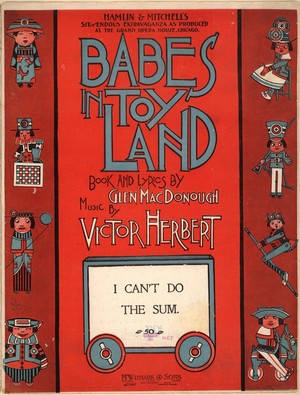 The official press release of Theater Plauen-Zwickau states: “In a far away village a young sheperdess is engaged the miller’s son. But the richest man of the village has also cast an eye on the girl and offers his hand in marriage. She turns him down, invokes his fury, and decides to escape with the miller’s son into the dark magical forrest – on the other side of which Father Christmas supposedly rules in the legenadry kingdome of Toyland. Together with Father Christmas the refugees manage to calm down the enraged righ man who is on their heels, seeking revenge.” 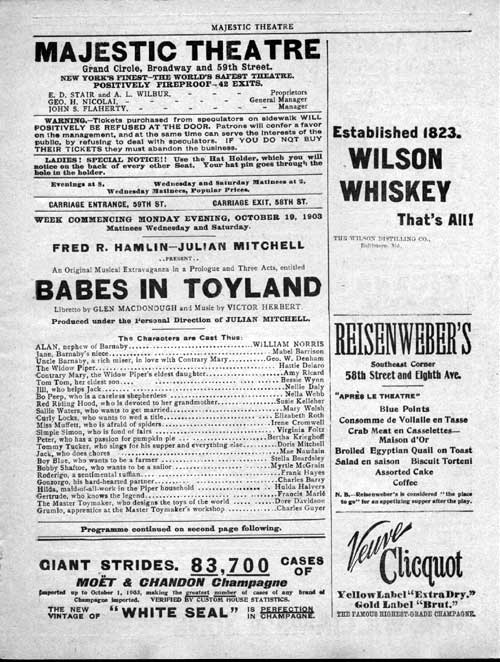 The cast list for the 1903 “Babes in Toyland” at the Majestic Theatre.

Victor Herbert’s operetta opened in June 1903 at the Chicago Grand Opera house, it toured to several East Coast cities before opening in New York in October 1903 where it ran for 192 performances on Broadway. This was followed by many successful tours and revivals. The piece was so popular that it spawned other “fairy-tale” shows over the next decade.

The authors wove together various characters from Mother Goose nursery rhymes into a Christmas-themed musical extravaganz, recylcing additional motives from Charles Dickens’s Christmas Carol, ideas from E.T.A. Hoffmann’s Nutcracker, as well as elements from Frank Baum’s Wizard of Oz. While the show – and some of its tunes – are very famous in America until today, especially the glorious “March of the Toys,” the score is virtually unknown in Germany.

Not even the legendary Stan Laurel/Oliver Hardy 1934 movie changed that. And Walt Disney’s Technicolor 1961 film production starring Ray Bolger is equally unfamiliar to most operetta fans in German language regions.

Decca Records recorded ten selections from the score in 1944. The recording is conducted by Alexander Smallens. The album was reissued in 1957, with Herbert’s The Red Mill on the other side. In 2002 Decca Broadway reissued the complete album on CD.

A recording of the complete score, with the original orchestrations restored and conducted by John McGlinn with the London Sinfonietta and the London Voices, was made in 2001. It featured Elizabeth Futral and Ian McKellen among others. It has never been released because of Mr. McGlinn’s veto. Though pirate versions of this recording have been in circulation among fans forever.

So now there will be the belated and overdue German premiere, conducted by Leo Siberski. Jürgen Pöckel signs responsible for the staging. Sets and constumes will be by Andrea Eisensee. Opening night is December 7, 2019.