Kurt Weill’s “Wintermärchen” Der Silbersee is not exactly an operetta, more of a fairy tale “with music” that tells the story of clashes in society: between the poor and those in power, such as members of the police and aristocracy. But the piece that premiered simultaneously in Leipzig, Erfurt and Magdeburg in February 1933 – a mere three weeks after the Nazi Party’s Machtergreifung – uses many elements also found in the cabaret operettas of Mischa Spoliansky. And there is a strong “operetta look” to the most recent production of Silbersee at Opera Ballet Vlaanderen, directed by Ersan Mondtag.

The Berlin-born stage director takes many of Barrie Kosky’s LGBT ideas and develops them further, in a more radical way. He turns the Kurt Weill/Georg Kaiser piece into something “incredibly queer”, as the prodction’s star Benny Claessens says: “It’s a gay opera through and through.” He might have said “gay operetta”. Or, as Kurt Weill expert David Savran wrote in a short Twitter review: “Imagine Kurt Weill meets John Waters meets Pierre et Gilles meets George Lucas.”

From an operetta perspective, that asks where the genre might be heading in the future (just as the very first Operette für zwei schwule Tenöre premiered in Berlin’s BKA Theater), there are a few important questions the show raises. 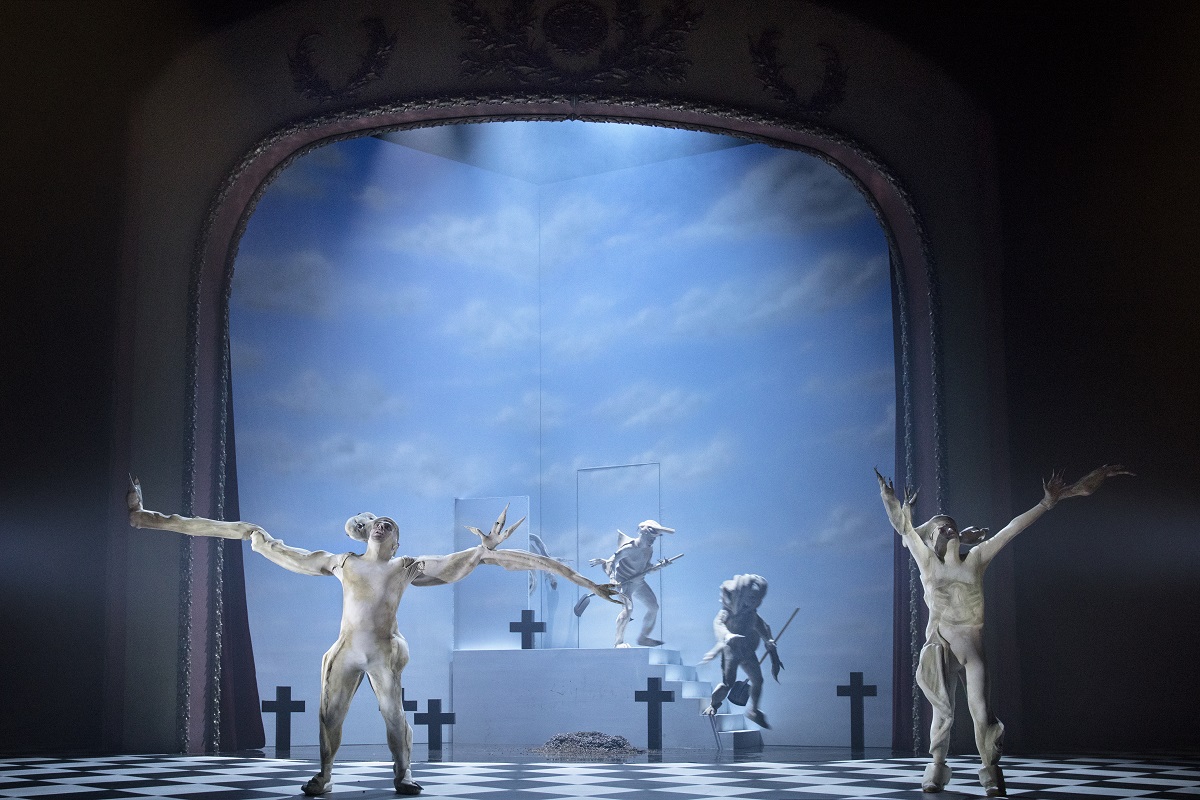 First among them: how do you execute “bad ideas” on stage and make them work? Mondtag presents his Silbersee as a theater-within-the-theater. We’re supposed to believe that we’re in 2033 in Flanders, Belgium, and that there’s been a total political roll-back into conservatism that includes persecution of gays and anyone who is “different”. In this climate of oppression, the fictional stage director – played by the outrageously flamboyant Claessens – wants to demonstrate with Silbersee what happened a hundred years ago. And he’s looking for the right Regiekonzept.

So, for starters, he presents the grave digging opening as a science fiction in which humans have turned into mutants. We see the cast looking like they’ve just escaped from a very trashy Star Trek episode. Or a terribly bad Star Wars prequel.

And after the famous pineapple has been stolen by Severin, the stage director and his crew step in and say: “No, no, this doesn’t work. It’s awful.” 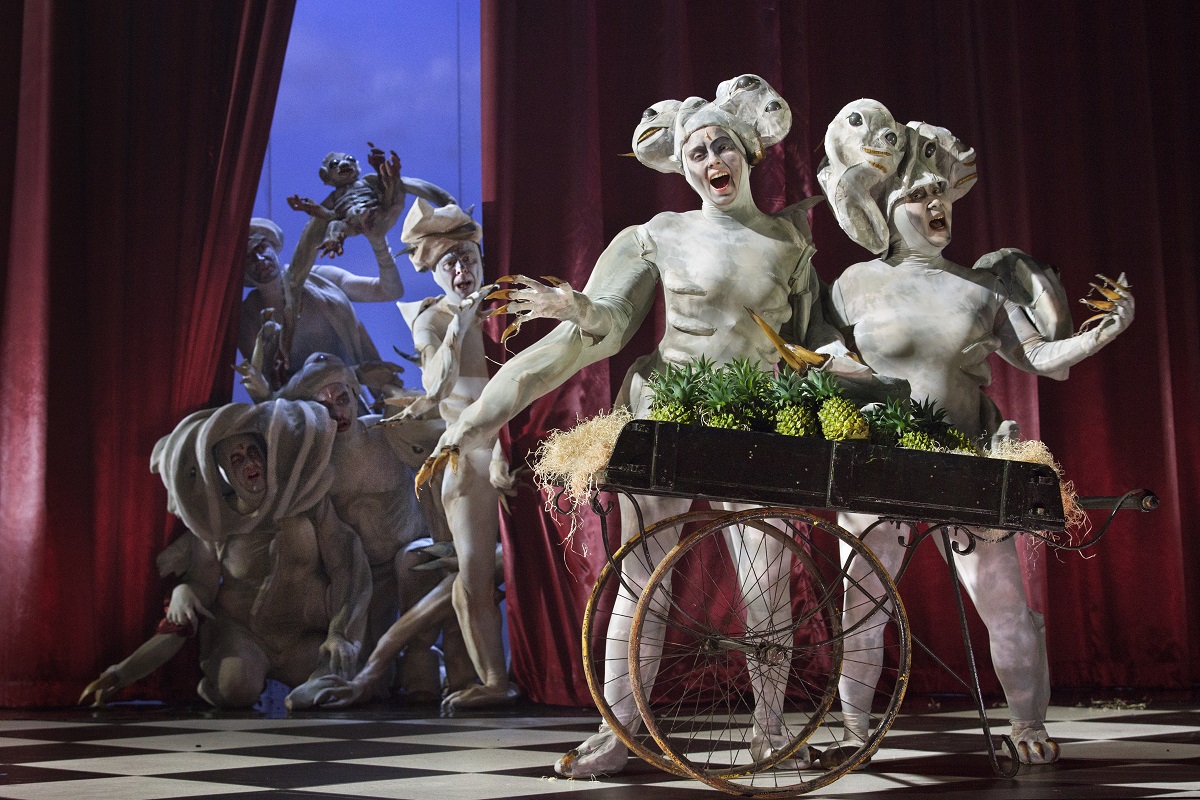 Indeed, it is. But it’s not funny-awful (like the “Springtime for Hitler” sequence in The Producers). It’s just plain awful. And you wonder: why show it? As a critique on modern stagings?

So, instead of mutants, the director decides to present the story of the poor thief Severin who stole food to survive as a confrontation between the Palestinians and Israelis. Israeli police officer Olim (also played by Claessens) shoots the escaping Palestinian Severin. And, of course, all hell breaks loose in terms of anti-Jewish protest.

The director decides that that’s also not a good idea to capture the significance of Silbersee today. Again: is this intended as a critique of modern stagings that try to be political, whether it fits or not? 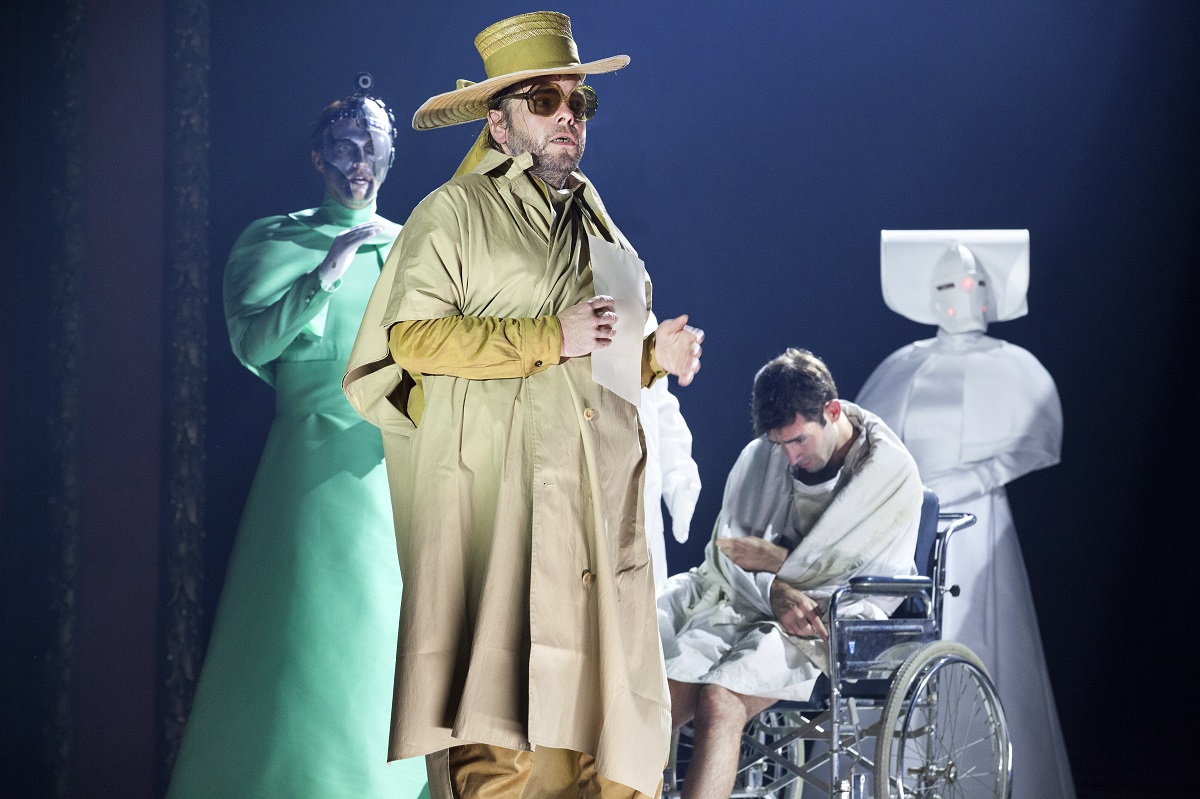 Benny Claessens in yet another new Olim outfit, with tenor Daniel Arnaldos in the wheelchair. (Photo: Opera Ballet Vlaanderen/Annemie Augustijns)

In a next twist, Olim turns into a sort of La Cage aux Folles version of Zaza who decides to nurse the wounded Severin. The “Lotterieagent” comes in like a copy of the famous Stephansdom costume from the 1920s Hubert Marischka revue in Vienna. But instead of the Stephansdom, the costume in now the castle which Olim wins with his lottery jackpot. (Costumes by Josa Marx.) 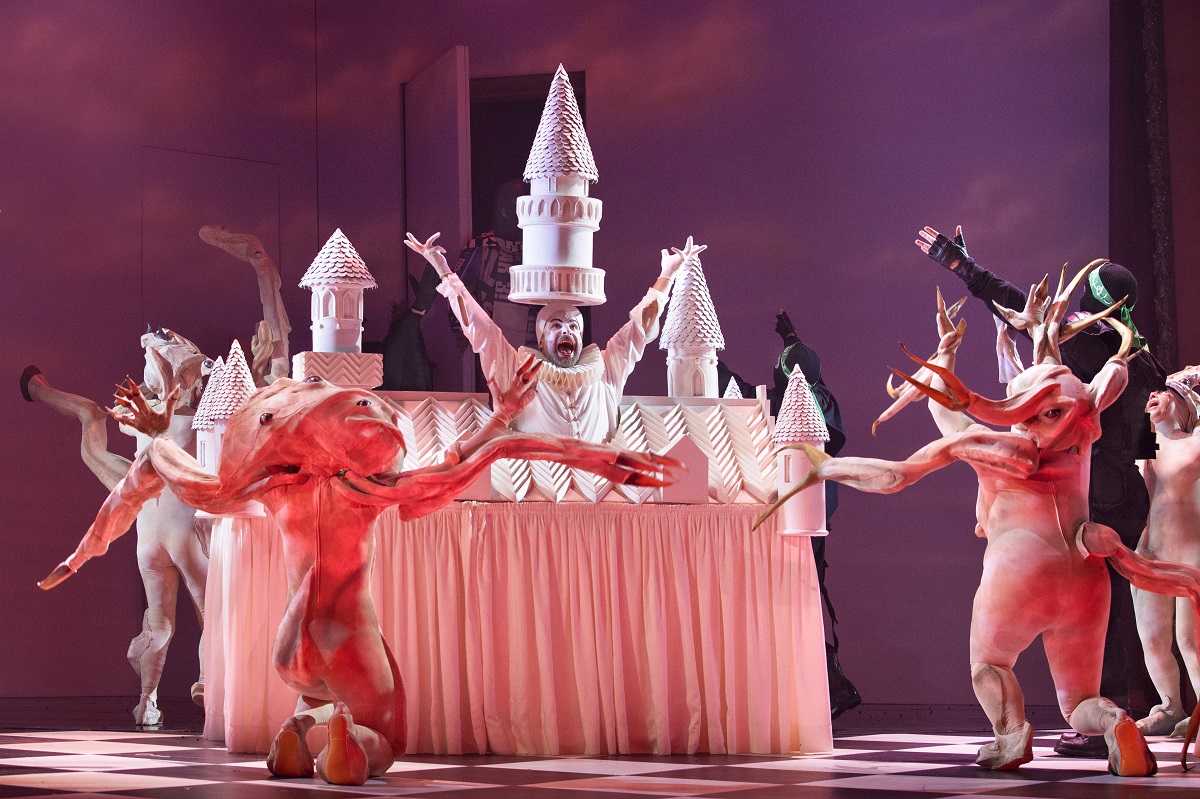 This leads to another round of new costuming. We’re now inside the castle which looks like an Aida set gone mad. It could just as easily be used for Oscar Straus’ Die Perlen der Cleopatra, with Olim/Claessens in the title role. (Scenography by Mr. Mondtag himself.) 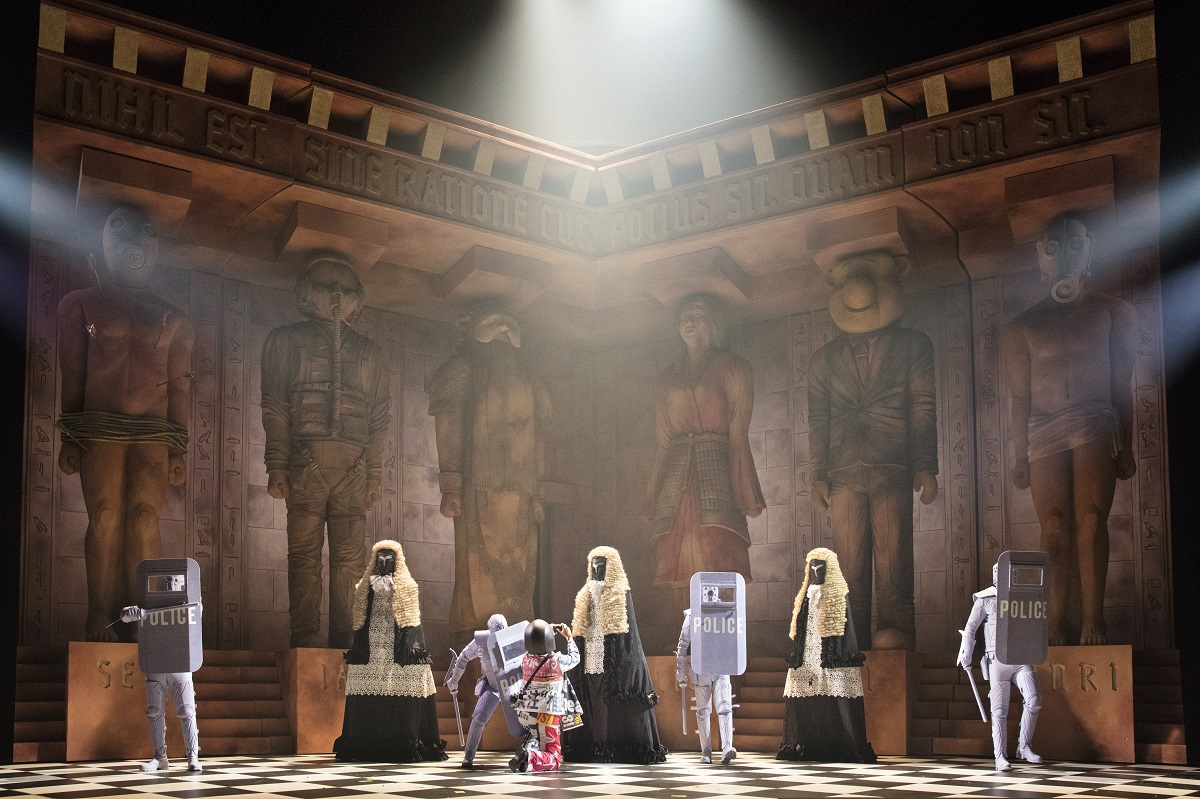 The inside of the castle as an Egyptian palace in “Silbersee.” (Photo: Opera Ballet Vlaanderen / Annemie Augustijns)

Of course, the Egyptian theme isn’t a good idea either. And so the staging changes again and again. At some point, Olim and Severin are half-nude Christian martyrs. 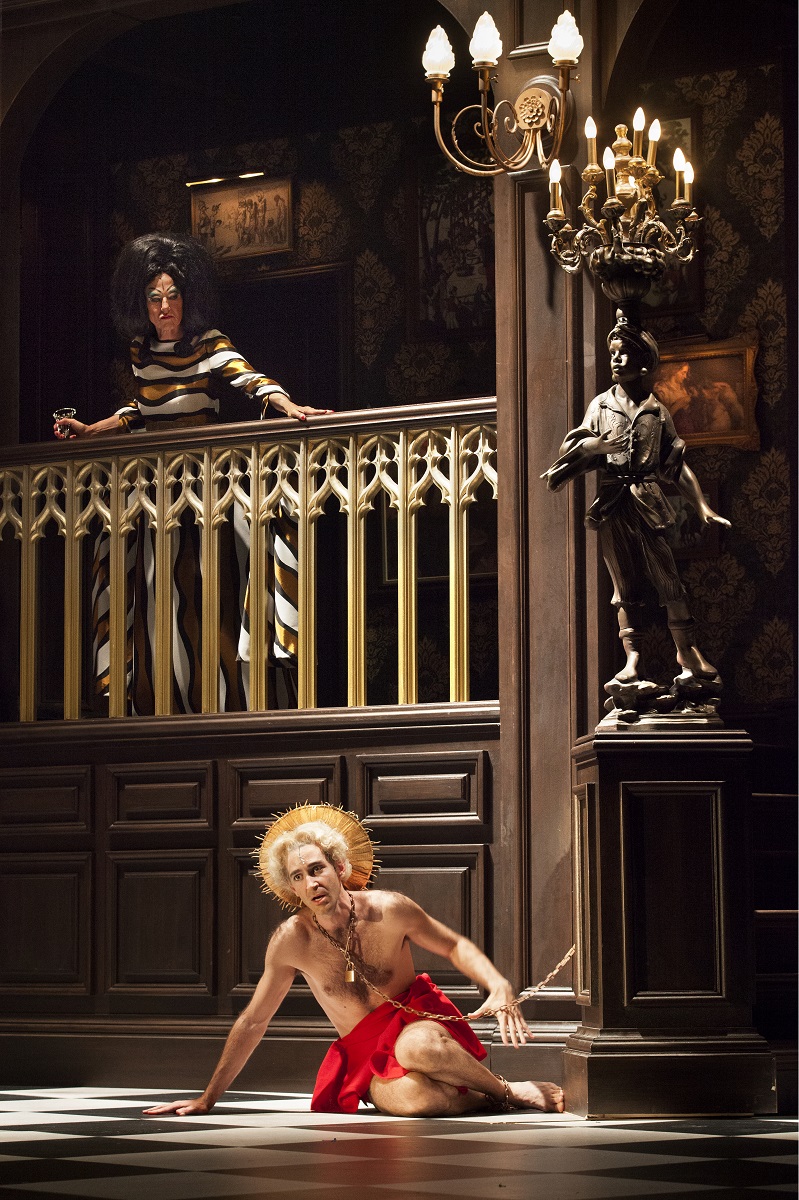 Until they eventually morph into gay martyrs – in a pink cowboy outfit (worthy of Arizona Lady) and a rubber onesie. In those costumes, the two lead characters who are now persecuted lovers face the future of being driven out of Silbersee by a homophobic society of 2033. And while the stage turns to the chorus of “Wer weiter muss, den trägt der Silbersee” we see Fennimore at the end with a suitcase – like a typical Jewish refugee from the 1930s. But we see Severin and Olim: dead. 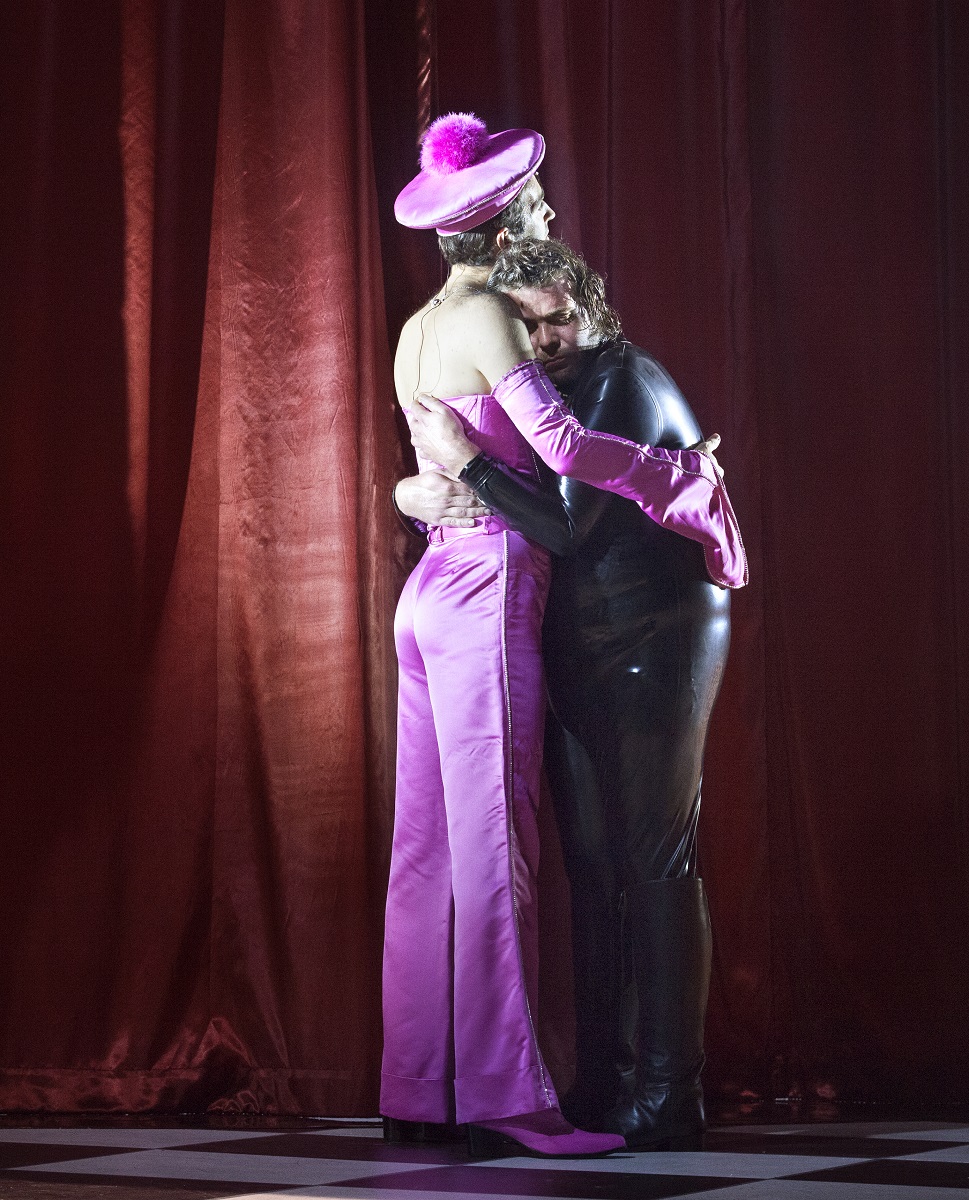 Obviously, the frozen Silbersee did not carry them away, as if LGBT are not worthy of being saved like others. The image of these two provocatively queer outsiders being excluded is an image that has haunted me ever since seeing the production in Antwerp.

Another thing that has been haunting me is the question: if you have so many ideas for the staging (that all turn out to be “bad ideas”) and if you have this theater-within-the-theater concept, but you cannot execute it in a way that is immediately understandable, are you then a “bad stage director”? Is it okay to trash a straightforward morality play and turn it into a nonsensical revue that only gets its points across sporadically? Is this due to a lack of Handwerk, on Mr. Mondtag’s part? 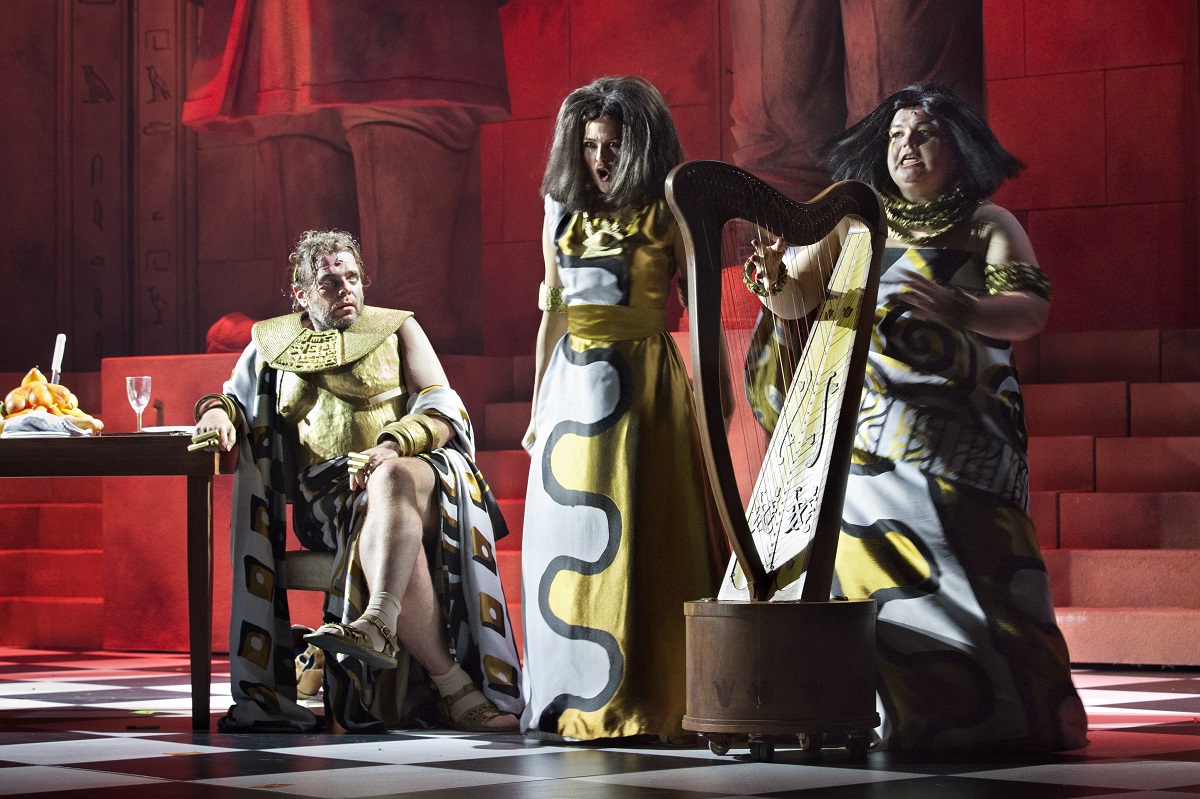 And if you do it like this, and if you bring your muse Benny Claessens along from Gorki Theater in Berlin, should you not pay at least minimal attention to the rest of the cast? We get Hanne Roos as a soprano Fennimore who makes absolutely nothing of the text in her famous numbers and just trills away “Caesars Tod” and “Ich bin eine arme Verwandte”… (The entire production is a mash-up of Flemish, English, and German.)

Maybe Mr. Mondtag realized this and that’s why he cast Belgian actress Marjan De Schutter as a double for Fennimore. While the two Fennimores on stage are confusing – and as nonsensical as much of the rest – De Schutter gets a moment in front of the curtain in a green Teletubby latex outfit and sings the “Arme Verwandte” song again, just with piano accompaniment and a kind of Milva accent. And suddenly that Weill magic is there, full on. You understand what the song is about, you get the emotions. You’re overwhelmed. And wonder why Hanne Roos is there in the first place? 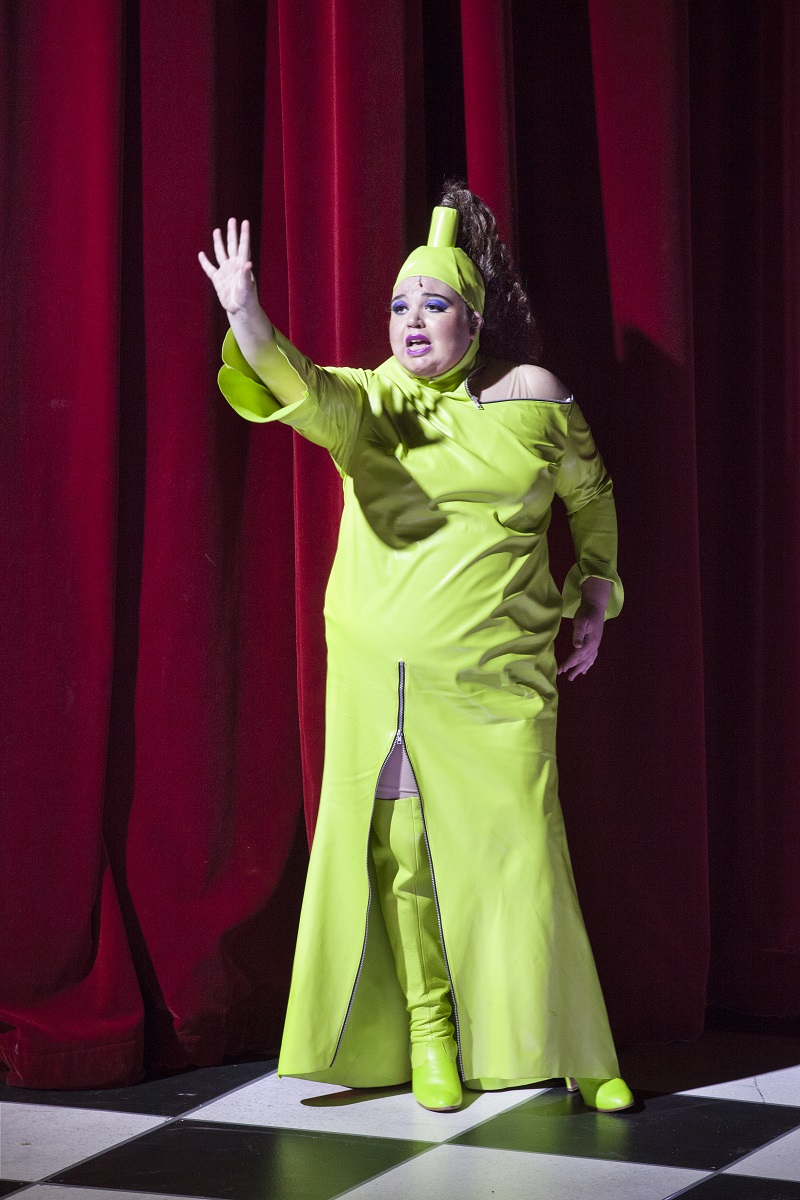 The thunderous applause for that Teletubby “intermezzo” shows that the audience realized too that something special was happening, something that did not happen during many of the other musical numbers. Certainly not during the “Zins und Zinseszins” song of the lottery agent. In which hardly a word was understandable. Killing its significance.

Which brings me to a basic question of all operetta: is it enough to just sing competently, or should there be more happening? And whose fault it is if that doesn’t happen? Is conductor Karel Deseure to blame, who gives an otherwise rousing rendition of the Weill score? Is it the casting director? Or the stage director who didn’t insist on performers that can carry his revue of “bad ideas”? 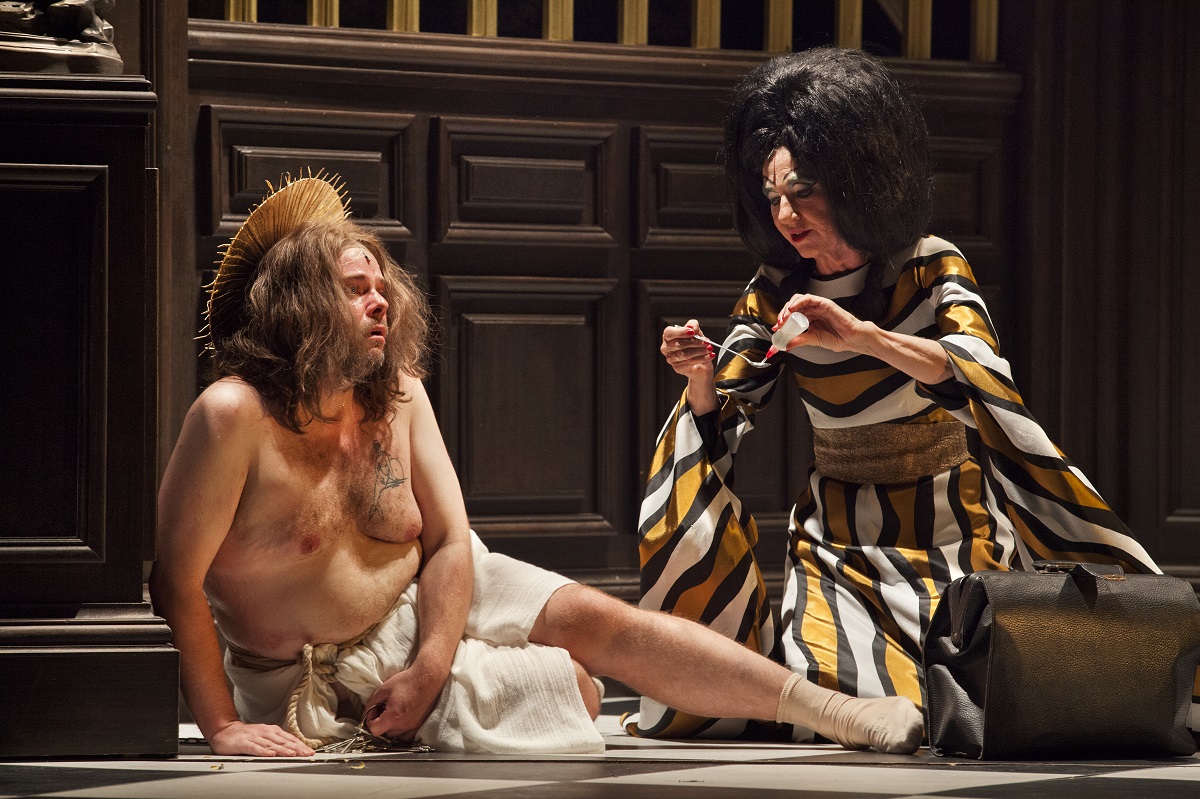 The Dutch star actress Elsie De Brauw as Frau von Luber showed how it can be done, with clear diction and super-dry humor. She stole the show, for me, even from Benny Claessens who seemed sort of unhinged. But then, in the end, Claessens and pretty-in-pink tenor Daniel Arnaldos as Severin brought it all together.

And though I was really annoyed with a lot of the 3 1/3 hour performance, I realize even days afterwards how powerful many of the scenes were and how unforgettable. So does that make the entire production great? 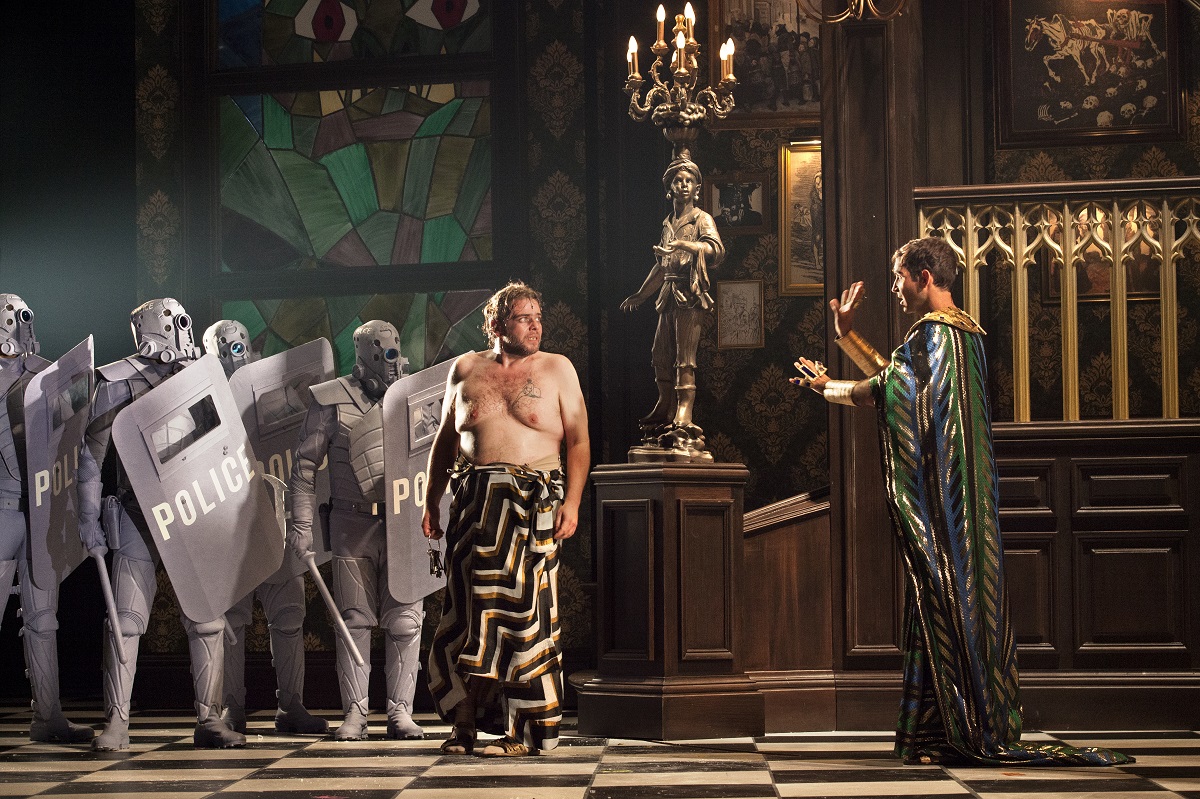 It was certainly sold out, completely, for the last performance I saw in Antwerp. And while some of the older subscribers around me left after the interval – to much “gay in your face”? – hoards of young students took their seats and seemed to enjoy this never-ending string of eclectic images.

Will Mondtag ever venture into a full-blown operetta (or musical)? Or was Silbersee has far as he dares to go down that path? Is operetta already queer enough in these post-Kosky days, or can that way of looking at the genre be expanded further? Would Benny Claessens be an interesting operetta muse like Dagmar Manzel, Jonas Dassler or Max Hopp?

One thing seems certain: in contrast to the many (many!) operetta productions brimming with “bad ideas” those of Mr. Mondtag are at least ideas I enjoy reflecting on and thinking back of. Even the mutants… though I truly (truly!) hated them. Could any of this survive for even a nanosecond in the unsubsidized world of commercial musicals?

Let’s wait and see what happens next. To quote David Savran again, who adored the Silbersee production and saw it a few days before me: “I really admire and love his daring, and his eye.”

We can agree on that!