“Welcome to the 20s” says the poster for Lila Lied, “The Queer Cabaret” that was presented in Berlin’s SchwuZ. In terms of location, that’s pretty amazing: an old storage building re-purposed as a giant underground disco for the LGBT community. Because of Corona, it has been closed for months. And before the re-opening in November, Lila Lied’s artistic director Ludwig Obst and his fellow crusaders were given a change to perform a best-of of queer classics from the Weimar era. 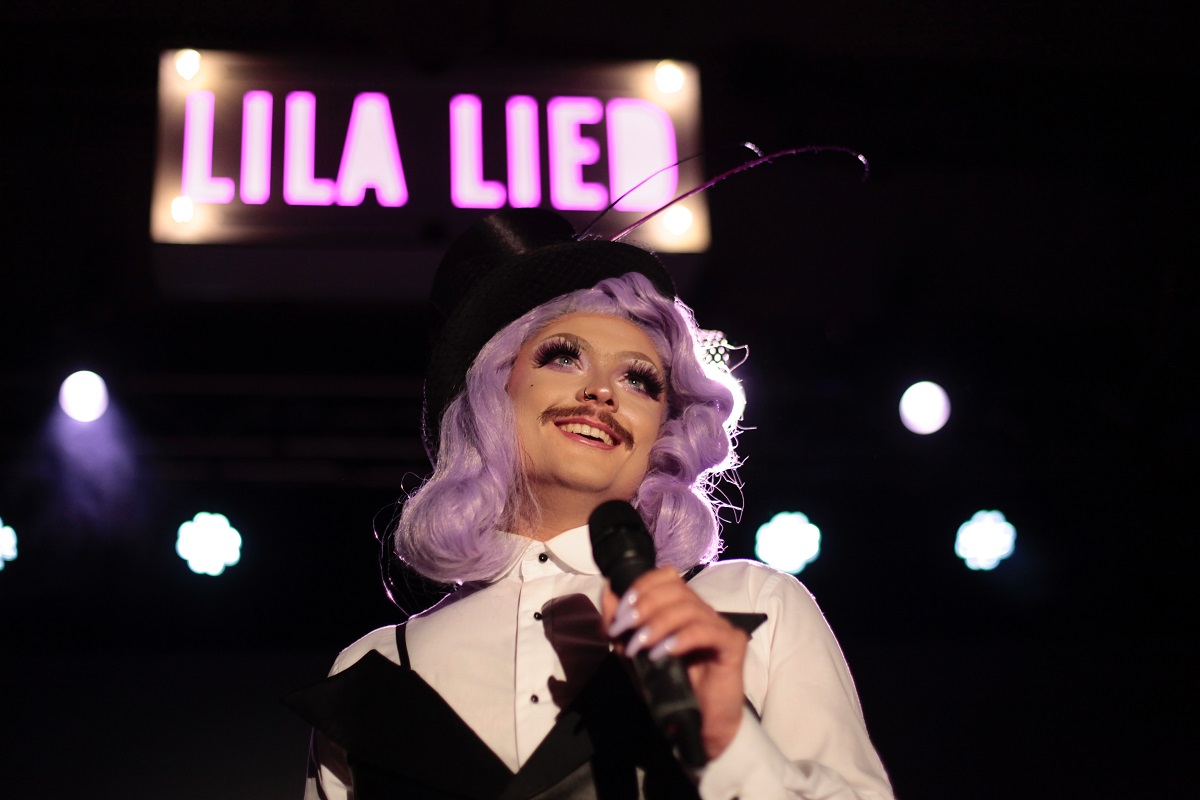 The song “Lila Lied” was written by Mischa Spoliansky in 1920 and became something of an LGBT anthem with the refrain “Wir sind nun einmal anders als die andern,” which translates as “We are different from the others.” Ute Lemper included it on her 1920s album, Barry Humphries incorporated it into his Weimar Cabaret program at the Barbican. And now it’s back where it originated: in Berlin!

The idea of this cabaret is to take the audience on a grand history tour, with music and narratives in between songs. Ludwig Obst acts as a sort of conferencier, with a purple (= lila) wig and drag outfit that wants to evoke the world many people know from musicals such as Cabaret. But instead of Joel Grey’s sinister evocations we now get Mr. Obst and his very healthy tenor voice, which gives these cabaret songs by Spoliansky, Hollaender, Scotto and others a somewhat “operatic” touch.

Instead of Liza Minnelli as a partner-in-crime, this conferencier has a group of people by his side who are many things: black sex workers, drag queens who have fled from Lebanon, gay Brazilian dancers. They are all “queer” in the activist sense of the word (and not “just” LGBT). But they are not necessarily convincing performers. And none of them sings. 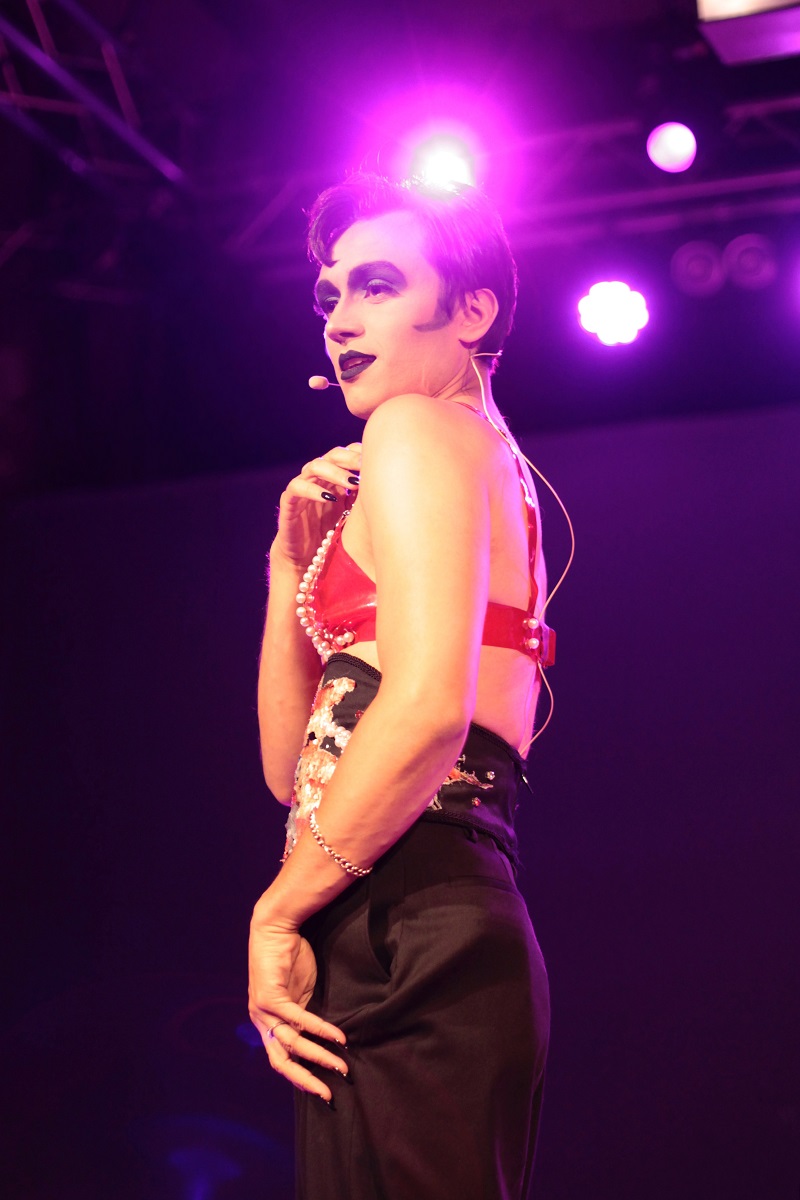 So, instead, Mr. Obst sings all the songs with his mighty tenor voice – or we hear Claire Waldoff with the sexually fluid “Hannelore” as a historic recording –, and we see Diego Salles doing an acrobatic dance. Or we see Hassan Dib (aka Queen of Virginity) stand in front of a mirror with a purple wig, doing a bored imitation Marlene Dietrich, while Mr. Obst sings “Ich bin von Kopf bis Fuß auf Liebe eingestellt.” 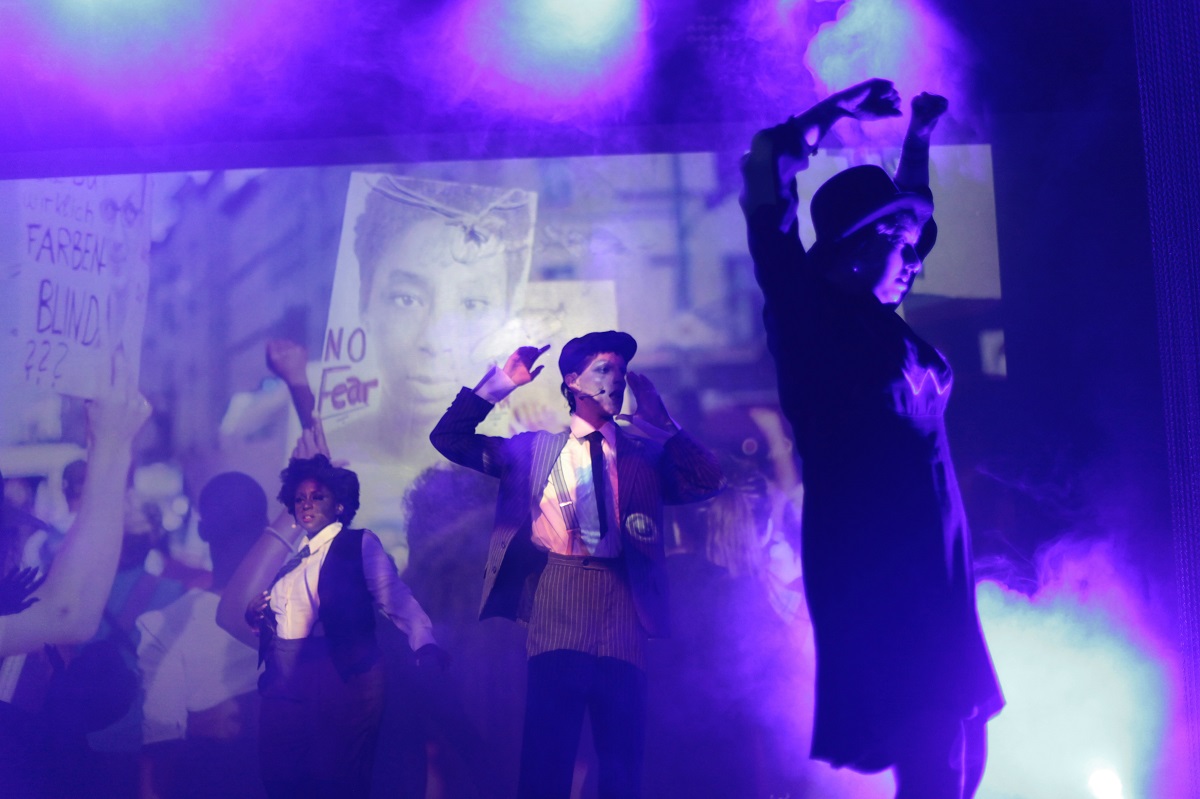 The full cast of “Lila Lied” at SchwuZ, including Akynos on the left. (Photo: Callum Leo Hughes)

At some point, Akynos – from the Black Sex Workers Collective – comes on stage and gives a lengthy talk about racism. She retells the story of Josephine Baker in (very!) rough and simplistic strokes, changing into a spectacular costume with feathers as she speaks. But after she’s fully changed into her Josephine outfit – proudly (or provocatively?) exposing her bare breasts in between – she just walks off. And that was it!

The assistant director of Lila Lied explains this, in a later email to the Operetta Research Center (see below), thus: “If you had attentively listened to exactly what she said, you may have realised that the purpose of her not performing was to incite exactly the emotion you felt — frustration from a white man who expects a Black woman to perform for him whenever he wants.”

It made me seriously wonder if it’s enough qualification to appear in a queer cabaret these days if you are a black sex worker or Lebanese “refugee” (if that is the right word for someone who says he escaped from Beirut and never wants to return there), but have little to no stage presence. Or apparent singing/stage experience. What’s even more: don’t want to sing and dance for “white  men” (like me) anway. 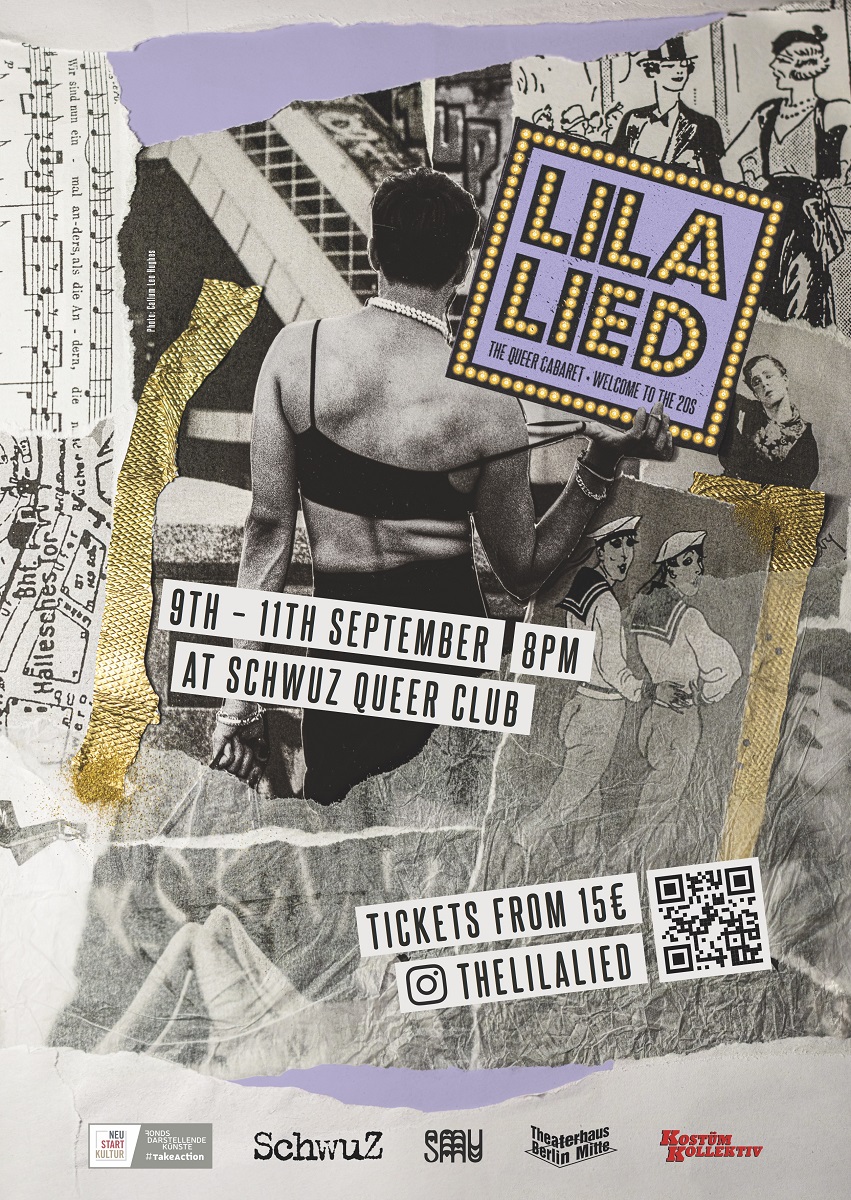 The poster for “Lila LIed.”

The hip, and very pleasant, youngish crowd didn’t seem to care about any of this. Or, differently put, appeared to be in sync and fine with the activist messaging and (non)performances. They went along on this journey to a world of yonder, mixed with today’s hot issues.

Towards the end of Lila Lied, the great operetta stars and 1920s icons Paul O’Montis, Wilhelm Bendow and Paul Morgan were presented in a spooky re-imagining of the sketch “Auf der Rennbahn.” If you don’t know that sketch or the protagonists – as I assume most people at SchwuZ did not – you probably didn’t understand why this was so poignant, with all three men “running” from the Nazis. Only the gay superstar Bendow survives.

Personally, I would have appreciated more nuanced information about the era that was evoked instead of the never-ending over-simplified retelling of history, especially when we’re dealing with highly controversial and complex material. Some of the info came across as flat and one dimensional, even though Schwules Museum is a cooperating partner and could have provided more substantial facts. 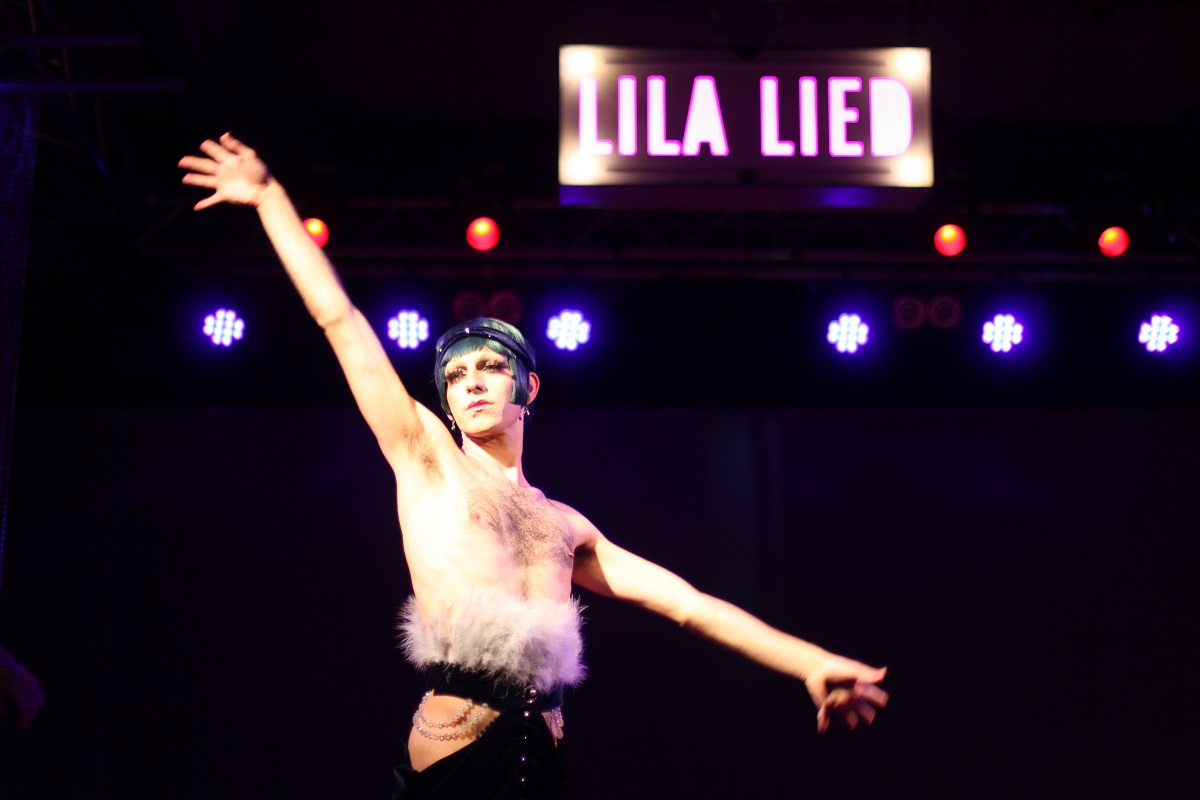 Also, since Paul O’Montis gets a special spot, I wondered why some of his ground breaking queer songs were not included, such as “Moritz” or “Hilde.” (Read more about O’Montis and a new biography about him here.)

Still, this was an evening in an amazing location that I would love to see more cabaret or operetta performances in in the future. Ludwig Obst has proven – with his tutti d*amore collective – that he can find stunning venues for his projects, and since his two tutti d*amore colleagues sat right behind me, I wondered why he didn’t put them on stage to perform this glorious material: “Eine kleine Sehnsucht,” “Ich bin so schüchtern, Madame,” “Morphium,” “Haiti” or “Ghetto.” They could have easily shown that these songs can be brought to live with gusto today…. But the other two tutti d*amore singers are “white,” of course, just like Mr. Obst. Maybe subsidies wouldn’t have been granted in that case? Maybe SchwuZ wouldn’t have accepted such a “white” ensemble?

It made me ponder, for hours afterwards, if there are no great queer cabaret singers from Lebanon, Afghanistan, Syria, anywhere, or sex workers – black or otherwise – with a performance background who could have been hired to sing/recite these cabaret songs? (I am sure they are around.) 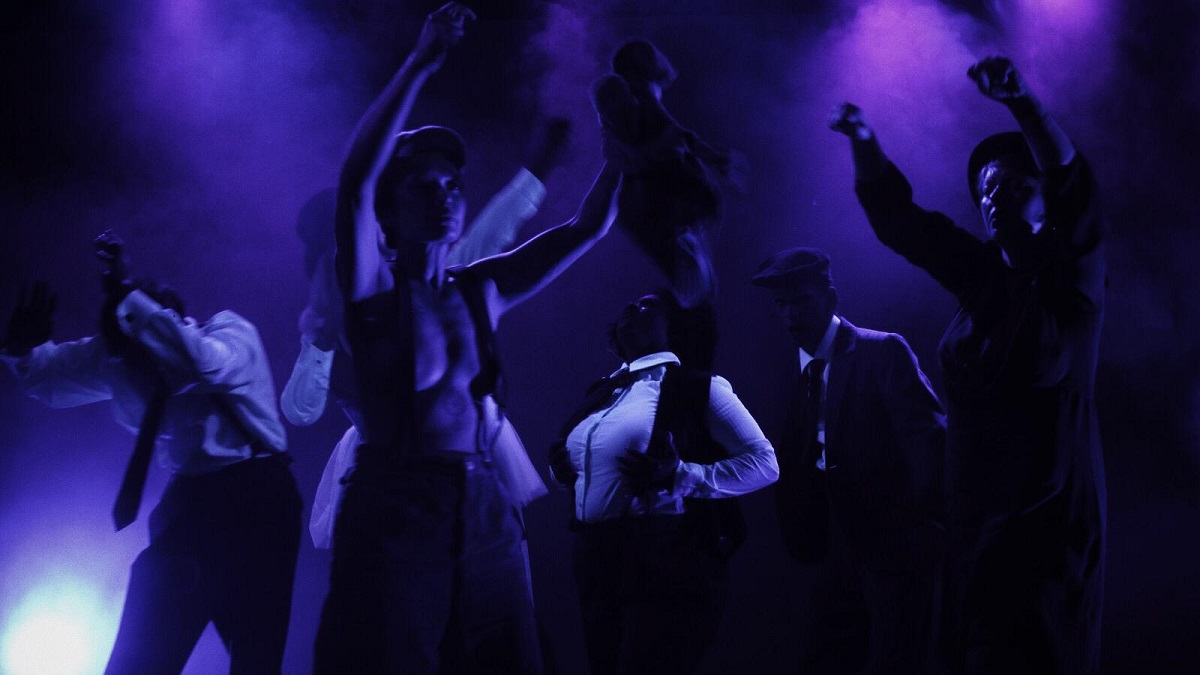 Hopefully, Mr. Obst will get a chance to fine tune this Lila Lied and present it again, in various venues. Since he says in his “Letter to the Audience” how important it is to raise his voice and make people aware of the situation of queer people, then and now, I wish he’d bring Lila Lied to shelters for refugees from Arab countries and tell them the story of Magnus Hirschfeld and the LGBT movement in Germany. Or perform Lila Lied in Poland, from where Mr. Obst’s family comes and where the situation for LGBT people today is highly problematic. Or even perform this Lila Lied for sex workers as a form of empowerment. The audience that came to SchwuZ was an “easy” audience that did not need much convincing that all of this was relevant political “stuff.” They sat there with their Club Mate drinks and took in a world of which many details are unfamiliar to them, with music they probably don’t know. The biggest laugh came when Akynos told them “The patriarchy thinks dicks smell like roses.” Obviously, everyone present could relate to that! 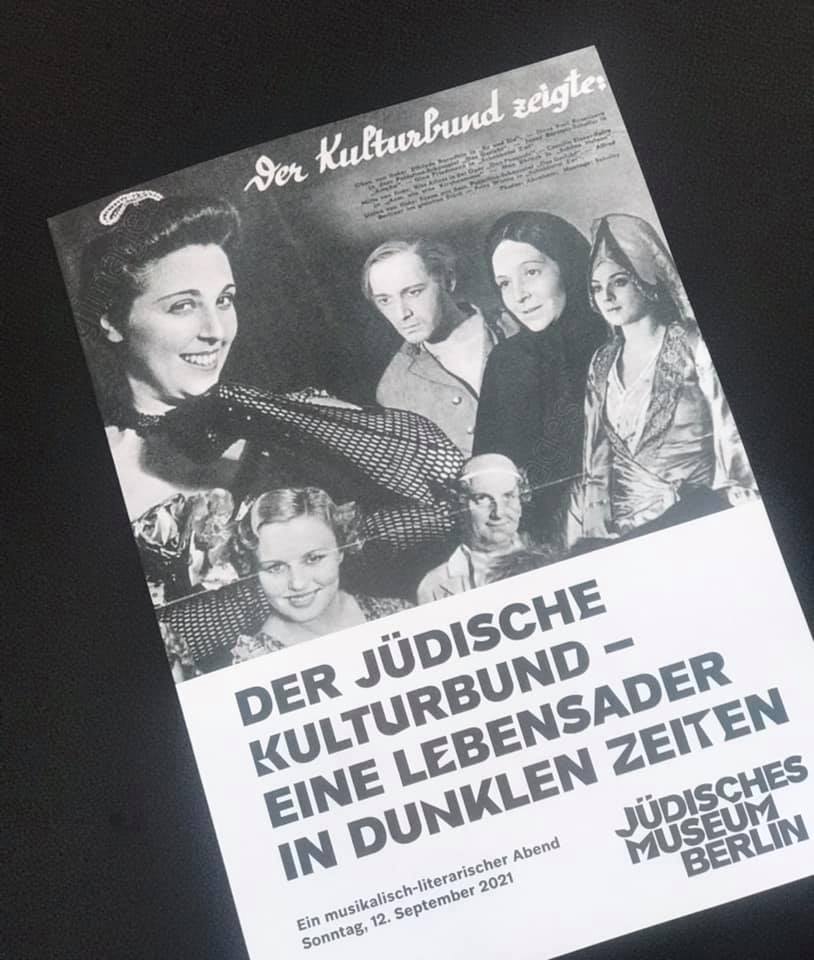 The program dedicated to “Jüdischer Kulturbund” at Jüdisches Museum Berlin.

Almost parallel to Lila Lied, the Jewish Museum of Berlin dedicated a similar historic journey to the “Jüdischer Kulturbund” and also mixed historical facts with music. Again, the venue was outstanding (though SchwuZ is, for sure, more breathtaking). The brief talks by people such as theater historians Stephan Dörschel and Peter Jammerthal about popular music far eclipsed the conferences in Lila Lied. And I must say, Alma Sadé singing songs by Willy Rosen or “Warum lügst du, Chérie?” was almost a blessing after the non-singing moments the night before. That said, it was spooky to realize that all people on stage at Der Jüdische Kulturbund – Eine Lebensader in dunkler Zeit were: “white.” And definitely not queer. Perhaps in the future, Jüdisches Museum and SchwuZ can mix their protagonists?

They’d both benefit from it, I think.

Note from the author: This article has been adapted and altered after it was first published, with details added and errors corrected. The show’s Assistant Director, Elliot Douglas, sent an email to the Operetta Research Center with his remarks after that, which we publish below as an important alternative perspective on Lila Lied.

For a more detailed account of the 1920s from an LGBT perspective, check out the book Gay Berlin; the recent Footnotes gives a fascinating description of Josephine Baker’s early career as part of the Shuffle Along cast. And if you are interested in sex workers in operetta, you might want to try Zola’s novel Nana describing the world of Offenbach and Paris in the 1860s.