It’s June, and somehow, this season, I had not yet been to an opera at the Staatsoper, where I experienced some of my most joyous theatrical hours last year. But tonight I got there. I’m not sure that what I went to see was precisely an opera – opera-bouffe maybe? — but I guess a piece is what its creators call it. 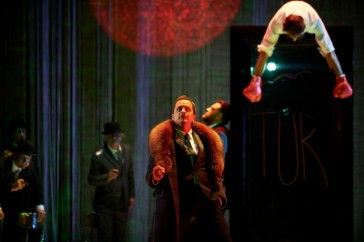 The piece in question was Mahagonny (excuse the abbreviation). Now writing anything about this piece, or its authors, usually puts you in one of two camps: the devoted, where Herren Weill and Brecht can do no wrong, or, well, the other. And to which do I belong? Well, I’m not devoted, but I can be convinced.

Liked Silbersee, hated Happy End, Dreigroschenoper is fine when not played and sung in the trendy camp spit ‘n’ growl style, but anyway nowhere near as good as The Beggar’s Opera, and the only time I’ve ever seen Mahagonny – my father saw the Berlin original — was in a basement in Soho, London where it had been tactfully trimmed. Heavily.

After tonight, I think that was a good idea.

Tonight, at the final ‘curtain’, to the weakest of applause (where were the mothers?) and a volley of booing — something I haven’t heard on a first night for a long time — I asked myself ‘why?’. The staging was competent (mostly), the singing was competent (mostly), the band was, I suppose, shape-changing according to the styles of Weill’s multi-flavoured score, I liked the choreography, what was there to boo? Did the audience not know to what they were coming?

Well. For me, it is the piece that is boo-worthy. The text seems naïve, long-winded, simplistic and even rather comic-strippish. The second act is really quite boring. Likewise Jimmy’s Rant.

The music doesn’t seem to know where it’s going, but it includes some really lovely ensembles. However the two pieces in English are such a patent throw-in for the US market, that they … well, are somewhat ridiculous.

So, the staging? Some lovely ideas, some lovely visuals, a lot of neat ‘covering up’ of the lacks in the text, a lot of green.

But Oh! I have come home with memories only of a blue plastic bag, a shopping trolley, candyfloss-haired whores (shades of Wildhorn and Les Miserables), Jenny’s Phantom gown, and, worst, the terrible effete dancing paralegal … argggggh! So many fiddly bits of stage business distracting too often from the main event.

Cast? Well, there were a lot of men, quasi-indistinguishable in their greyish costumes all of whom sang adequately to well. But the big man is Jim Mahoney. 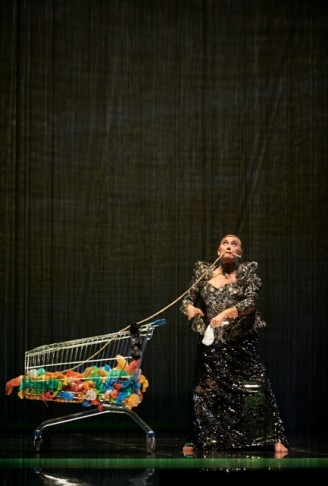 This role was sung by Michael König, whom I last saw as a disastrous Max in Freischütz. Tonight he wasn’t disastrous vocally, he waded through the demanding music of his part well, but why the heck cast a big unshapely man as a romantic lumberjack?

Oh Lord, when he lay on the bier… I had to stifle a laugh!

Evelin Novak was an excellent Jenny … it is not her fault that the role is pretty impossible and that the director has her tramping inexplicably round the stage… and Gabriele Schnaut was Begbick. OK, it may be tradition to cast this role with a clapped-out Brunnhilde, but I wanted, all night, to have an Agnes Zwierko –type contralto, whose voice didn’t wobble, singing the part. How much more musically and comically powerful.