There are two truly stunning moments on this new disc by tenor Piotr Beczala devoted to Richard Tauber. And not coincidentally they both occur in the same song. That song is Tauber’s own composition, “Du bist du Welt für mich” from the 1934 operetta Der singende Traum. 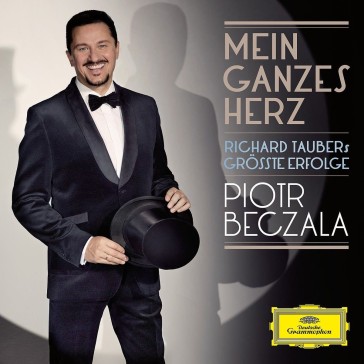 An album devoted to Richard Tauber.

For this number the modern tenor teams up with the historical tenor for a duet that can only be described as exceptional. For starters, I can think of no other operetta recording where two men declare their undying love to each other with words like “Ich lebe nur für dich” (“I only live for you”) or “Ich sehne mich nach deinem Mund” (“I long for your lips”) or “Ich hab’ nur das eine Begehren” (“I have only one desire”). I’m sure the Polish tenor did not intend this to be a homosexual super-celebration. But with phrases like these sung by two guys, how can you not think of homo love? Let’s just say, these two guys sound like a pretty sexy pair. And anyone into queer operetta or that sort of thing will love the new disc just for that number.

So, if this was the first stunning moment, what is the other? It’s the sudden appearance of the Tauber-voice itself, after six tracks in which Beczala gloriously sings one melting “tearjerker” after the other, from the inescapable “Dein ist mein ganzes Herz” to “Grüß mir mein Wien” to “Wien, du Stadt meiner Träume” and “Lippen schweigen” with a very very very ‘slutty’ sounding Anna Netrebko in adventurous German and with lusty gliding top notes. All of these tracks made me think more of Fritz Wunderlich than Richard Tauber, because obviously Wunderlich’s slim and silvery tenor is the role model for Beczala, not Tauber’s dark and sensual ultra-sentimental style. Beczala is aiming for the clean-cut 1950s operetta way of singing, which is enhanced by some very 50s arrangements by Paul Bateman – think Mantovani and his “cascading strings.”

When after the first verse of “Du bist die Welt für mich” (another Bateman arrangement) the historical Tauber voice suddenly appears, you know after two seconds why Beczala will never ever have the (operetta) career of his predecessor. Because Tauber, with three words, demonstrates how this music can also be sung – and what different effect you can make with it. His doesn’t just sing notes correctly, as Beczala does, he uses rubati and slight hesitations to make the lines fully come to life. And then – yes, here’s the moment of moments – Tauber uses a simple “Ja” to slide up and into the refrain (“Ja, du bist die Welt für mich.”) The listener is simply overwhelmed. It’s not a particularly high note; there isn’t even anything particularly exceptional about this upbeat note either. But the way Tauber puts emphasis on it, a kind of ecstatic roar and fully aware of the effect he can make with it, really puts all tenor efforts of later generations to shame. And that includes Beczala, who doesn’t dare use that famous style, a style the Nazis once declared “degenerate” and “Jewish kitsch”. But a style that makes operetta music of this sort sound unique. A style, also, that Wunderlich & Co. did not bring back after 1945. On the contrary, Wunderlich as all other post-war tenors sang in a “clean” way that tried to avoid any “Jewish kitsch,” thereby making a lot of this repertoire sound unbelievably banal and reducing it to little more than great simple melodies great simple tenors can show their voices off with.

That’s the problem with “homage albums” like this one.

You pay tribute to one of the greatest singers who ever lived and recorded. And instead of offering a unique and new interpretation of the material in question – as for example the various artists on the album Twentieth Century Blues: Songs of Noel Coward, where the likes of Robbie Williams, The Pet Shop Boys and Marianne Faithful can be found – here there’s nothing new. Instead, there is wonderful tenor singing in digital sound quality, singing that is interchangeable with any Wunderlich disc of the exact same restricted repertoire selection, but without Wunderlich’s own unique historical charm, so typical of the 50s and 60s. What is Beczala’s singing typical for in 2013, you may ask?

If you don’t mind such details (if you want to call them that), you will probably enjoy and even love this new album. If you expect anything new and interesting from Beczala, as a modern-day comment on the genre operetta, then this disc is not for you. Not only is there not a single out of the ordinary title included – and Tauber recorded many many many out of the ordinary titles – there is no out of the ordinary interpretation anywhere. Which you could call a missed opportunity since Beczala is certainly a very attractive singer who could come up with more than another middle of the road “Dein ist mein ganzes Herz” rendition.

Maybe next time, if there is another Deutsche Grammophon disc?

By the way: Piotr Beczala’s first solo project as an exclusive Deutsche Grammophon artist went Gold in his native Poland on the first day of its release. And the tenor will also tour with this programm. The dates can be found of the website of Deutsche Grammophon (there is even a concert in Linz in June, Tauber’s city of birth).