There are news, and there are NEWS. This certainly qualifies for the latter category, in capital letters: Berlin’s private theater Tipi am Kanzleramt will produce its own version of the Paul Linke operetta-farce Frau Luna (1899) with an all-star cast that reads like a wet dream and includes the Geschwister Pfister, Pigor & Eichhorn, Cora Frost, and Ades Zabel. The production opens in October 2016 in the magical entertainment tent, opposite the Reichstag and next to Angela Merkel’s headquarters. 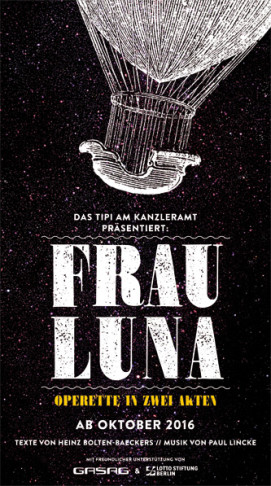 Poster for the 2016 “Frau Luna” at the Tipi Theater in Berlin.

There have been discussions about such a commercial operetta project – especially Frau Luna – by the Bar jeder Vernunft/Tipi am Kanzleramt team for years, as a follow-up to their legendary Im weißen Rössl in 1994. Back then, they played their all-star operetta in the smaller Bar jeder Vernunft. After the later success of Cabaret, which started at the Bar, but then moved to the bigger Tipi, this first new operetta outside of Berlin’s state subsidized theater system in 20 years, will start at Tipi right away.

It’s the perfect place for it, because one of the hit songs of Frau Luna is about a nightly chance-encounter at the Siegessäule (“Oh Theophil, oh Theophil”). This gilded victory column used to stand right in front of the Reichstag, where the Tipi is now situated. And the real Siegessäule has meanwhile been moved, just around the corner from the Tipi. It has become the symbol of gay cruising, and it is the name of Berlin’s biggest queer city magazine. Considering that the production team and cast quality as “queer” in the best possible sense of the word, this seems more than appropriate, and promising. Linke’s farce was originally a one-act affair that played in the Apollo Theater, down at the shady southern end of Friedrichstraße, famous for its easy-going morale and prostitutes. 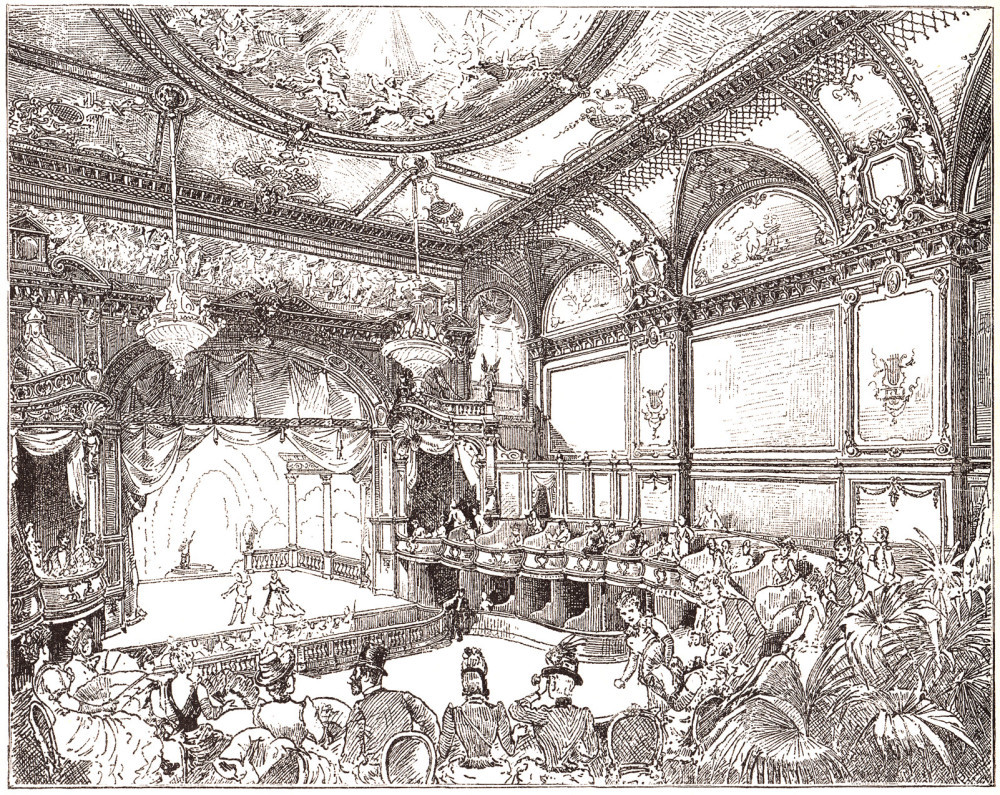 The interior of the Apollo Theater, a variety theater on Friedrichstraße.

One of the main attractions of this story about a group of Berlin “everymen and -women” flying to the moon in a self-constructed space ship were the barely clad “twinkling stars” dancing around in space (singing the hit song “Schenk mir doch ein kleines bisschen Liebe, Liebe, Liebe”). The scenes playing on the moon offered a chance for extravaganza: they focus on the encounter of the earthlings with the goddess of the moon, Frau Luna, and her royal court, at whose helm Minister Theophil stands watching over law and moral order. Because of the huge success of Frau Luna, it was later expanded into two acts with added music, which today is the standard performance version. It includes the ultimate Berlin hymn, “Das ist die Berliner Luft-Luft-Luft” as the greatest of all operetta finales.

In Berlin, the title role of Frau Luna will be played by Andreja Schneider, from the comedy trio Geschwister Pfister. Her rough charm should lead to a very new and very wonderful interpretation of a role usually sung by chirping coloratura sopranos. Miss Schneider is going to reclaim the part for a different type of actress, and that should be a moment of triumph, without doubt. The man from earth she gets to seduce is Fritz Steppke, played by Benedikt Eichhorn, a famous comedian himself. The two of them are a remarkable pairing.

The other couple in the show is the widowed landlady Frau Pusebach, who fell for a certain gentleman called Theophil one moon-less night, long ago, as she walked home past the Siegessäule.Theophil is none other that Miss Luna’s top minister who came down to earth – and Berlin, especially – for a fun-night out. And where better to go but cruise at the Siegessäule, to finish the evening with a “quicky”? Well, that quicky left a lasting impression on Pusebach, who has been longing for a repeat-performance ever since, waiting for the return of her “Ziggy-Stardust.” Theophil will be played in the new production by Tobias Bonn, and Pusebach by a cross-dressed Christoph Marti. Mr. Marti has already demonstrated his ability to play show-stopping widows when he appeared as the old aunt in Gräfin Mariza in St. Gallen. He has also demonstrated in Hello Dolly and Clivia (title roles in both cases) what a mesmerizing diva he can be. There is always real chemistry between Marti and Bonn, his real-life husband. If their Pusebach & Theophil is anything like their recent Mireille Mathieu and Peter Alexander, as seen at the Bar jeder Vernunft and on tour, this production will be worth watching just for them. 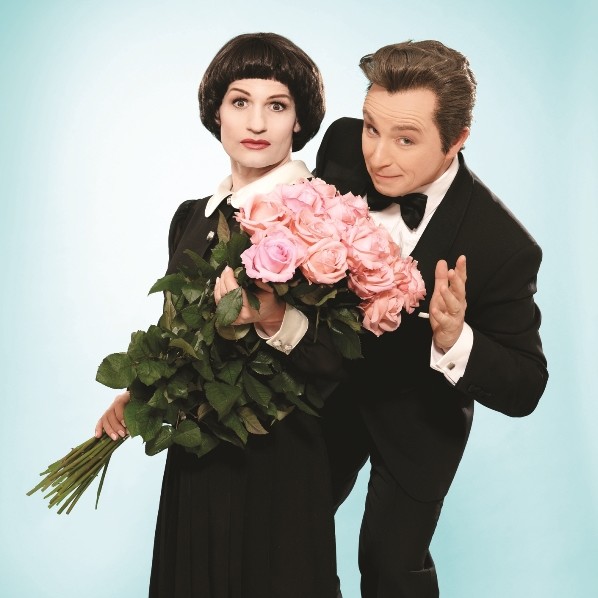 But there is more: the royal court of the moon will be populated by some of the funkiest entertainers in Berlin. Venus, the other goddess-on-the-loose will be played by Cora Frost; one of the moon’s servants is Ades Zabel (yes, the Ades Zabel from Hostel Hermannstraße); and Mars is cast with Gert Thumser. That is, individually and collectively, pretty impressive.

The moon voyagers from Berlin-Mitte are completed by Thomas Pigor as the tailor, Max Gertsch as Pannecke-the-tax-collector, and Sharon Brauner as Marie, the niece of the landlady. She gets to sing one of the biggest hits of the show, and one of the loveliest operetta songs of all time: “Schlösser die im Monde liegen.” It contains that wonderful line-of-wisdom: “Wo man dich liebt, nur da musst du verweilen, wo man dich liebt nur kannst du glücklich sein.” And that place of love is in Berlin, not somewhere in space.

Last, but not least, there is Gustav Peter Wöhler as Prinz Sternschnuppe, the extraterrestrial suitor of Frau Luna, in competition with Steppke.

Stage director Bernd Mottl will channel all the energy of all these stars and find a stage arrangement that lets each and every one of them shine in their own way.

The music will be arranged for a small band by Johannes Roloff, who will also conduct. Sets are by Friedrich Eggert, who already collaborated with Mottl on a dazzling Madame Pompadour in Cottbus. The costumes are by Falk Bauer. 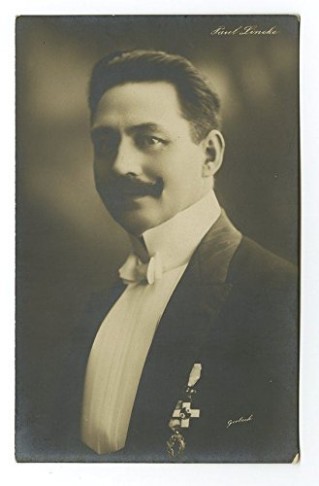 It’s a more than fitting celebration of the 150th birthday and 70th anniversary of Lincke’s death. After all, he was the founder of a specific Berlin style operetta in 1899 with Frau Luna, which developed into a clear competition to the more conservative Viennese operettas that are better known today – which doesn’t mean that the works of Lincke, Jean Gilbert (father of Robert Gilbert) and Walter Kollo (grandfather of Rene Kollo) are any less good. They would all deserve a revival: from Kinokönigin to Lysistrata.

Frau Luna is a celebration of “Ich bin ein Berliner.” Considering that today the German capital is once again a cool and beloved metropolis, to which people flock for a good time, quickies included, the timing for such a revival seems perfect. It will also be an interesting alternative (and competition) to Barrie Kosky’s queer operetta readings at the Komische Oper. And it will be an interesting alternative to the Frau Luna by Herbert Fritsch at the Volksbühne. The more intimate Tipi am Kanzleramt is certainly closer, in terms of atmosphere, to the original Apollo Theater. 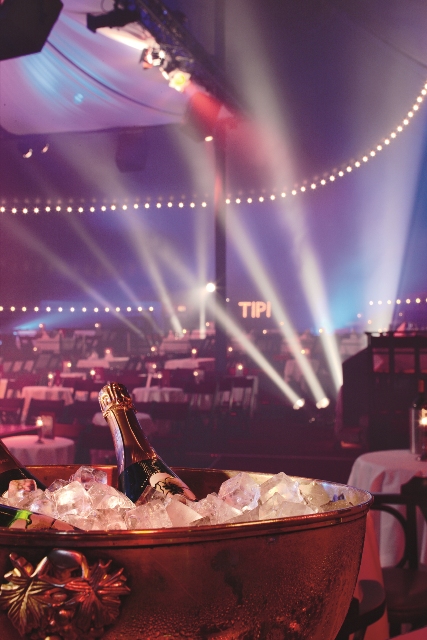 The interior of the Tipi Theater in Berlin. (Photo: Stefan Klonk)

The new production is supported by GASAG and the Stiftung Deutsche Klassenlotterie Berlin, who elevate this Frau Luna to a major cultural event. It can claim to be the most interesting operetta project of 2016, especially because it is, for the most part, a commercial enterprise. And like all commercial operettas of the past (i.e. all works of the genre pre-1933) the need to make money with a show that plays five times a week (Wednesdays to Sundays) has led to highly inventive casting all-round, casting mostly absent from state subsidized productions, including those at the Komische Oper that only hires external stars for individual roles while relying on the standard ensemble for all the other roles.

But there are so many other great operetta things happening in Berlin this year too – from the Geschwister Pfister appearing in a Spoliansky revue to an Offenbach festival, both at same-said Komische Oper. What’s clear already is that operetta has never been so alive and innovative in Berlin in the past 50 years as it is today. And that alone is remarkable. As Barrie Kosky likes to say in his promotion videos: “Buy your tickets now!”

As a postscript: Frau Luna and Paul Lincke were chosen by the Nazis to be one of their “Aryan” operetta heroes. This slightly outdated piece from the pre-jazz and pre-WW1 era was given a new life in the 1930s: there was a glossy extra-large production of the Große Schauspielhaus, re-named Theater des Volkes. There was also a film version to promote this rediscovered non-Jewish alternative to the later and jazzier Berlin operettas by Abraham & Co. The old Lincke was given a medal as “honorary citizen of Berlin” at the Rote Rathaus. After years of neglect, being overshadowed by more contemporary composers writing in the new syncopated style, Lincke suddenly found himself revived and put in a “classics” category with Johann Strauss, Millöcker and Suppé. By claiming Frau Luna for their political propaganda, the Nazis redefined the way we hear its music and see its supposedly “nostalgic” content with regard to normative gender roles, propriety etc.

By presenting “Frau Luna” with a non-operatic cast that is opposed to all the standard associations we have had since the 1930s, and by giving this piece back to cabaret artists with a pronounced queer attitude, the producers are giving “Frau Luna” back to those people who it was originally written for at the Apollo night club.

The producers are also breaking through that other Nazi tradition of state subsidized (and supervised) operetta, by turning it into a  commercial enterprise again. The commercialism of operetta once forced its creators to think outside of the box, think big, think sexy. It’s high time that someone in Germany reminded us of what glorious results can be achieved when you apply this concept to operetta today, and help get over that never-ending Nazi shadow cast on the genre and the way it is still performed; also in Berlin.