There is a special connection between police forces – and operetta! Whether it is Offenbach’s Les Brigands or Genevieve de Brabant with its corrupt gendarmes, or Gilbert & Sullivan’s Pirates of Penzance, there are many memorable appearances of men-in-uniform. You might even count prison guard Frosch in Die Fledermaus in, too, or the beefeaters in The Yeomen of the Guard. Or the hunky soldiers in Patience. The list could go on. Now, with Gay Pride season upon us, a flood of photos with new men in uniform has hit social media, showing the police force all singing and all dancing in a way that might have even astounded Mr. Offenbach. 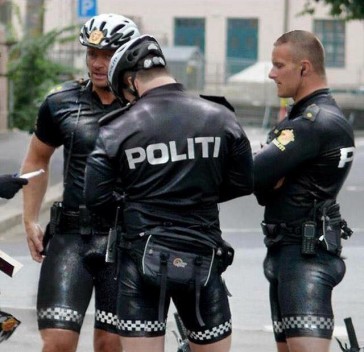 It was a simple post on the Facebook site of Boner magazine, showing Finnish police force members giving out parking tickets in what at first looks like a fantasy uniform, worn by fetish guys straight out of a Tom of Finland sketch. But, as it turns out, the photo is of actual police men from the land of the midnight sun. And they made us think, over and over again, of the many famous scenes in operettas where hordes of men storm in, singing such lines as “A Policeman’s Lot Is Not A Happy One.” Well, the famous G&S troopers might reconsider that statement if they were given the option of a costume change. And possibly a gym subscription.

In operettas of the 19th century, the joy of putting police forces on the stage was to ridicule them as representatives of the state. It was special fun to show these authoritarian figures as dumb and harmless – and pirates or thieves as far more clever. Showing them as “idiots” was part of the topsy-turvey concept of original operetta.

The other reason why there were regiments of sexy uniformed men on stage – as in The Grand Duchess of Gerolstein – was to give the ladies in the audience something to look at. This aspect of satisfying female spectator needs is often overlooked. But Emily Soldene, for example, explains the appeal of actor/singer C. D. Marius playing Landry in Hervé’s Chilpéric in London in her Theatrical and Musical Recollections (1896):

Young and beautiful, and slender, and sleek, and sly and so elegant. […] He played Landry, and made love to Frédégonde or Brunehaut, he didn’t care which, with an ardour that was not only particularly French, but particularly pleasing and particularly successful, so successful indeed that every girl in the front of the house was seized with a wild desire to understudy those two erratic, not to say imprudent characters. He certainly looked awfully nice, his figure being perfection. 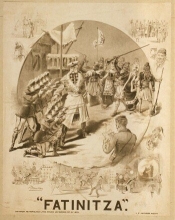 Then, of course, there was the opposite: the troops being played by women in uniform, looking strapping and confusing. William Dean Howells called such armed ladies „horrifyingly grotesque” in 1869 in the Atlantic Monthly. His verdict: they present a „satanic subversiveness“ and are „anti-actresses producing antitheater […] blurring categorical distinctions and creating unnatural hybrids“. These unnatural gender hybrids were so popular that Offenbach and Franz von Suppé engaged similar troopers in many of their operettas, most famously Suppé in Fatinitza.

And while I’m on the topic of Gay Pride and soldiers, here is a highly amusing version of “I am the very model of a model major general” with a new text – in classic Burlesque style – and with a new kind of regimental outfit.