When I was very young, I had a book called something like The Operas of Puccini. I can’t remember – half a century later – whether it just left La Rondine out, or merely treated it I dismissively, but I have, ever since, presumed that the piece was a bit of a curious and unsuccessful opera-operetta half-breed. As If Meyerbeer had tried to write opéra-bouffe. But then I got to know the enchanting Song of Doretta. Can’t be that bad, I thought. 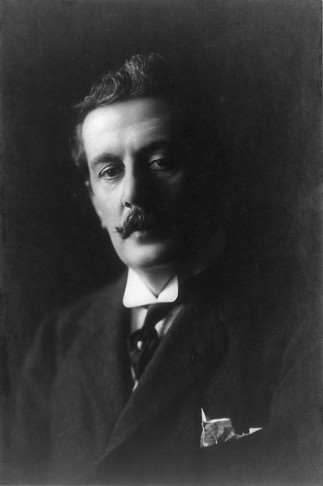 Giacomo Puccini, who tried his hand at operetta once, with “La Rondine.” (Photo: Wikipedia)

Well, last night, at the Deutsche Oper, I got to find out for myself. I don’t think it’s either curious or unsuccessful. Yes, it’s an interbreeding between the operatic and operettic conventions of the time, but why not? We interbreed horses and roses on purpose, why not shows? I found the tone of the piece perfectly agreeable and the music delightful, and including a couple of really swoonful Big Tunes. I was less delighted by Willner and Reichert’s libretto, which is a mass of overused clichés, characters, and set-pieces from the German-language musical stage. Not a patch on the witty contemporary French works of Willemetz and Barde. If you took the word ‘amore’ out of this text, the show (which is deliciously non-long) would be 15 minutes shorter.

What really made the evening enjoyable for me, however, was the way the show was presented. Especially the direction, the design and that Deutsche Oper speciality, the casting.

The direction was by Rolando Villazon, and it was a triumph of clean, clear, unfiddly staging. Any ‘ideas’ or elements that were superimposed on to the text, to give it a much-needed dash of original flair were absolutely coherent. The masked white figures of the heroine’s past lovers, silently stage managing the action, were a grand touch, leading up to a perfect climax when, at the end, she crowned her latest lover with a similar mask, before heading back to her old life as a courtesan. Would that Willner and Reichert had had ideas like that! The only touch I didn’t like was the introduction of the Kit Kat girls and their MC into the nightclub scene: the atmosphere of the piece shattered. Wrong period, wrong country, a rather tasteless and incoherent moment in an otherwise finely judged and attractive-looking staging.

The scenery (Johannes Leiacker) and costumes (Brigitte Reiffenstuel) more than played their part in this. The setting was like the direction, uncomplicated, and without trundlings-on and trundlings-off, and very pleasing to the eye (I wouldn’t mind finding that beach in Nice! The real one is all pebbles!). The costumes were just delightful. Though how Magda managed that act 3 cream suit without her maid … 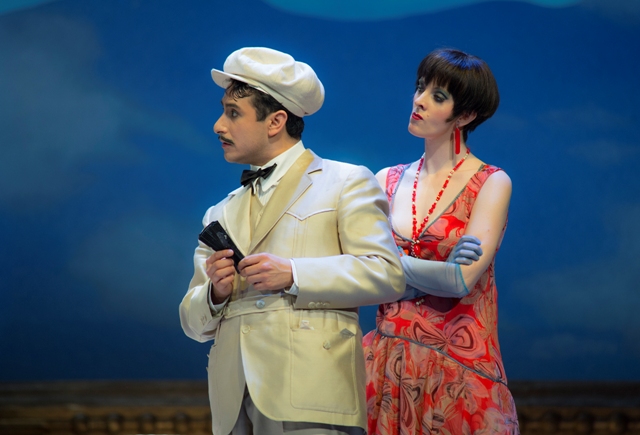 The other hero of the night was the casting director. Amongst the film-sized credits in the programme, his name doesn’t appear. So I asked. Christoph Seuferle, you have done it again. An exquisitely cast show. And I didn’t even see the first cast!

Aurelia Florian played Magda, the courtesan who thinks she longs for Amore, until she finds out it comes in a cottage. She looked grand in her rich clothes (a little less so in her poor girl disguise), she acted with convincing style, and she sang like a cross between Mimi and Rosalinde, which must be right for the role. Her delicious delivery of the ‘Doretta’ song set the show rolling at full speed, and when she pulled the stops out in the big ensemble and moments, she soared.

Her naïve lover was played by Joseph Calleja. He’s a tall, strapping, fine-looking man (which helped him not to appear the fool the part is written as) and, when he sang, his beautiful, masculine tenor voice just zinged effortlessly round the auditorium. At some time, during the evening, everyone else had problems with being heard over the enthusiastic orchestra. Not he. His pianissimi reached Row 14 like a jet plane. More, please.

The ‘operetta’ element is represented by the other two main characters, Magda’s maid, Lisette, and her poet, Prunier. It’s pure, old-fashioned Louise Kartousch and Ernst Tautenhayn, right down to the sexual ambiguity. Except, sadly, they didn’t dance. I would have liked that. Lisette, who is written as far-too-Adèle (Fledermaus) to be true, was played to the hilt by Alexandra Hutton, who managed to make it as un-Adèle as possible. This is the lady I described as the DO’s quadruple threat, when I first saw her as the three women in Hoffmann. A magic combination of acting, singing, dancing and star qualities. They were (except the dancing) all on show tonight: and if her fun kept the evening bubbling, I was also excited to hear my favourite Papagena soaring up lyrically, with Magda, in the big quartet, to the lyric rather than the coloratura heights.

Her partner was Alvaro Zambrano, who probably won’t be pleased if I say he was simply born to play the ‘petit comique’ in pieces like this. I’m sure he can do other things too, but he had the style so right, and he made a totally joyous pairing with Ms Hutton.

Nobody else in the piece has much to do, but there was a wholly appealing rich Rambaldo from Stephen Bronk (Magda left him for a … penniless tenor?), and Magda’s trio of cocottish friends were played by no less than three of the house’s baby prima donnas (Siobhan Stagg, Elbenita Kajtazi, Stephanie Lauricella). Yes… Pamina, Sophie or Rosina one day: a cocotte the next. Bravo, ladies. 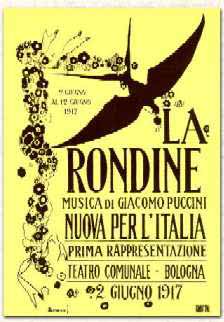 Cover for the score of Puccini’s “La Rondine.”

Everyone concerned last night deserves praise. Silke Sense’s choreography (I assume she ‘choreographed’ the mass scenes in the club, with their mature students and frenetic dancers, crushing the lovers apart), Roberto Rizzi Brignoli’s bouncing, lilting orchestra, when they weren’t too enthusiastic. All right, loud. I reserve my bad notes solely for Messrs Willner and Reichert. What a pity Puccini didn’t go to Willemetz or Barde. But then La Rondine wouldn’t have turned out as it has.

Which is? Somewhere between unhappy-ending Lehár and the Kálmán Der kleine König which I saw last year in America and … Puccini. Fair enough.