This week-end, Dutch operetta fans can see a brand new student production of La Vie Parisienne at the Fontys Conservatory. It follows the somewhat problematic version of the same show a few years ago that was set to revive operetta in a fresh and modern way in the Netherlands. 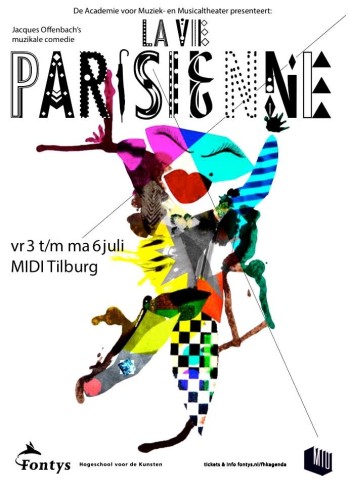 Poster for the 2015 production of “La Vie Parisienne” in Tilburg.

You might recall that the situation in Holland is such that operetta is almost exclusively performed by amateurs, often in a style that makes the genre appear more old-fashioned and dated than it need be. There are no stagings of the Kosky kind in the country. And when some Stage Entertainment people tried presenting an updated version of operetta with musical comedy stars, it was not an altogether convincing experience. So here is a fresh look at the show with young performers.

There will be four performances over the week-end, from July 3 to July 6 at the MIDI Theatre, on Heuvelring 108. Tickets are 10 Euros.