Barrie Kosky’s first foray into the Broadway musical at the Komische Oper was Cole Porter’s Kiss Me, Kate in 2008, in a production that, eight years later, continues to revel in the glitz, glamor, silliness, and pathos of musical comedy. Kosky, deeply in love with theatricality and keenly aware of the historical provenance of the work he directs, emphasizes the play’s metatheatricality with his signature, over-the-top style, which underscores the polychrome opulence of both Cole Porter’s Shakespearean pastiche and the Broadway musical itself. 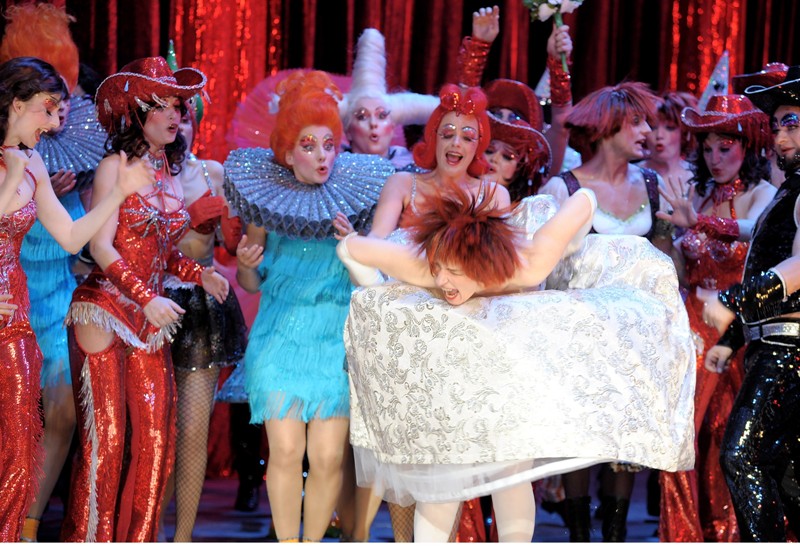 Dagmar Manzel and ensemble in “Kiss Me, Kate” at the Komische Oper Berlin. (Photo: Monika Ritterhaus)

Few musicals are as rich as Kate, and the brilliance and infectiousness of the score conceal Porter’s experimental audacity and skill at writing extremely divergent song types, from ballads to comic specialty numbers, waltzes to patter songs. Kosky, moreover, underlines the American-ness of the piece by turning this backstage musical into a hyper-theatricalized reflection on American musical comedy. He exaggerates the not always flattering stereotypes that Europeans have of American culture and the Broadway musical, in particular. In several scenes, Bianca’s suitors and the large chorus are costumed in brightly-colored, sequined cowboy outfits, a deliberately nonsensical choice considering there are no cowboys in Kiss Me, Kate.

And by turning all the chorus boys gay, Kosky emphasizes the gay subcultural links to the musical, Porter’s own homosexuality, and Germany’s clichéd but not inaccurate view of the Broadway musical as the most emblematically gay American performance genre.

Whether operas, operettas, or musicals, Barry Kosky’s productions demonstrate a refusal to be put into a “drawer” or classified as “U” or “E.” In that sense, they resemble the work of composers like George Gershwin, Duke Ellington, Leonard Bernstein, and Kurt Weill. The latter famously stated, “I have never acknowledged the difference between ‘serious’ music and ‘light’ music. There is only good music and bad music.” Unlike Weill, however, whose musical theatre for both Berlin and Broadway deconstructs the opposition between esoteric and popular, Kosky exuberantly and irreverently mixes high and low. And although he claims that he hates the terms “high culture” and “entertainment culture,” he clearly delights in setting them jarringly against each other. It is thus fitting that his first musical at the Komische Oper should be Kiss Me, Kate, since that piece juxtaposes Shakespeare, the epitome of high culture, against musical comedy, long considered the lightest, most topical, and most disposable of musical theatre genres. A backstage musical about a touring company’s musicalization of The Taming of the Shrew, Kiss Me, Kate overlays three different plots and theatrical vernaculars: Shakespeare; the seriously fraught relationship between a director, Fred (Peter Bording), and his star and ex-wife Lilli (Dagmar Manzel). Their tempestuous relationship, meanwhile, is juxtaposed against the backstage chaos and madness. Although Kosky brings out the farce in all three plots, he recognizes that the backstage love story is the most seriously musicalized, the one in which most is at stake (and the one that explicitly references operetta). But even this plot he sees as a collision of high and low, describing it as a combination of George and Martha from Who’s Afraid of Virginia Woolf and Kermit and Miss Piggy from The Muppet Show. 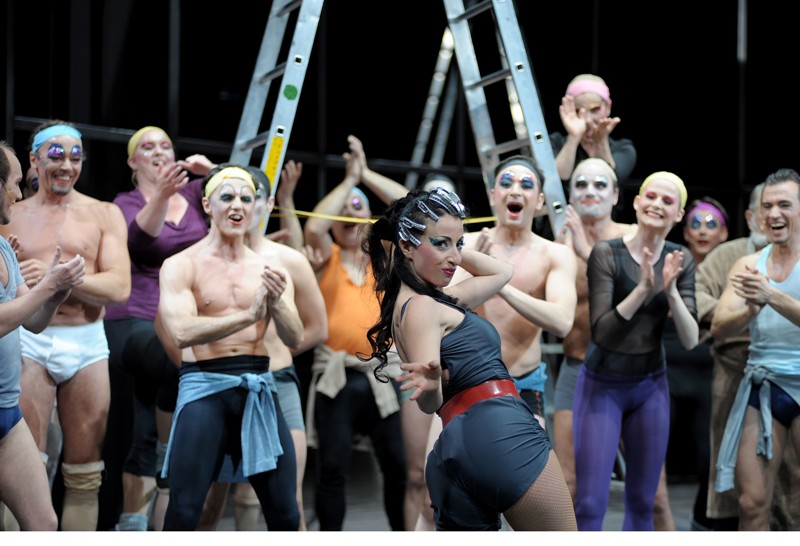 Perhaps the key to understanding the cocktail of “U” and “E” that Kosky mixes up in Kiss Me, Kate, and in so many other productions, is the idea of camp, which is commonplace in the U.S. but quite foreign to German culture, especially theatre as Hochkultur. The Kiss Me, Kate program includes lengthy excerpts from Susan Sontag’s pathbreaking “Notes on ‘Camp,’” originally published in 1964, as well as an essay by Christoph Dompke, about the sexual (mainly homosexual) connotations and resonances of musicals and their importance in U.S. gay male culture. Kosky’s production exploits the combination of “irony, sentimentality, nostalgia, [and] parody” that constitutes camp while celebrating what Sontag calls its “theatricalization of experience,” its way of transforming being into playing. The backstage setting of Kiss Me, Kate makes the piece especially ripe for being turned into a multiply metatheatrical piece. In Kosky’s production, the orchestra is seated on risers stage left while the space around it alternates between stage, dressing room, and wings. This spatial arrangement is linked to a temporal scheme that shifts between rehearsal and performance, pre-show and post-show, allowing Kosky to make almost every number into a diegetic, elaborately choreographed, self-consciously theatrical, campy presentation. Only Lilli’s “So in Love” and Fred’s gentle second act reprise of the song provide moments of stillness and inwardness. And while there are other haunting images, including two elderly chorus girls applying make-up who visit Lilli’s dressing room like ghosts, most of the production represents a hyper-theatrical fantasy of a Broadway musical. 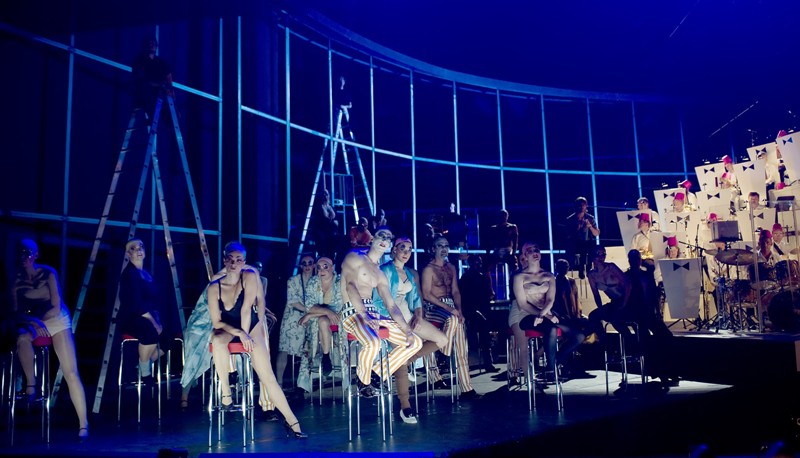 The sexy chorus and dance ensemble in “Kiss Me, Kate” at the Komische Oper Berlin. (Photo: Monika Ritterhaus)

The male dance chorus is as flamboyantly sexual as the female is ardent and vigorous. This choreographic subversion of the gender binary is crucial in camping the production and tying it in with the long histories of theatrical cross-dressing and gay drag.

Kosky explains that the costumes (by Alfred Mayerhofer) were decisively influenced by the Cockettes, “a totally crazy artist’s collective from San Francisco.” Founded in 1969, during the first heady days of gay liberation, the Cockettes were a group of gender-bending men and women who lived and performed together and embodied the hippie avant-gardist dream of turning life into art. Kosky references their “totally crazy, gay drag happenings” in which they parodied Broadway musicals and sang their own bizarre versions of pop songs. “All were on LSD and wore crazy masks, had green and orange beards, fur costumes and sequins.” Kiss Me, Kate virtually copies some of the Cockettes’ costumes and uses Cole Porter’s score to resuscitate their hallucinatory spectacles to great effect.

Eight years after its Komische Oper premiere, Kiss Me, Kate is better than ever. The staging and choreography remain tight and glittering, while the performance of the always brilliant Dagmar Manzel has only deepened. Careening between over-the-top theatrics and nuanced introspection, her Lilli is more untamed than ever before. Unfortunately, her new partner, the Dutch baritone Peter Bording is not her match and far less impressive than his predecessor in the role, Roger Smeets. Smeets played Fred as an aging, bald, if resourceful, nebbish of a hero dressed up as a dashing Broadway leading man. Bording, in contrast, does not yet seem to have found his way into the role and his Fred, although satisfactorily sung, is stodgy and stiff. The dependably fine Sigalit Feig plays a spitfire Lois Lane while Robin Poell makes for an agile and sexy Bill Calhoun. Komische Oper regular Stefan Sevenich is wonderfully and uncharacteristically restrained, playing General Harrison Howell for the pompous, bumptious fool he is. Koen Schoots leads a lively performance from the Komische Oper orchestra, which is even better than it was eight years ago. But the real stars of the show are Barrie Kosky and choreographer Otto Pichler, whose production continues to astonish for its inventiveness, dazzle, and, most important, fidelity to the spirit of Cole Porter.