In November 1951, composer Frederick Loewe and librettist Alan Jay Lerner premiered Paint Your Wagon, their homage to the American gold rush of the 1850s, at Broadway’s Shubert Theatre for a disappointing eight month run of 289 performances. Nearly sixty-five years later, New York City’s Encores and Ghostlight Records have teamed up to give us a long overdue, indeed thrilling, recording of this neglected score. And what a revelation it proves to be! 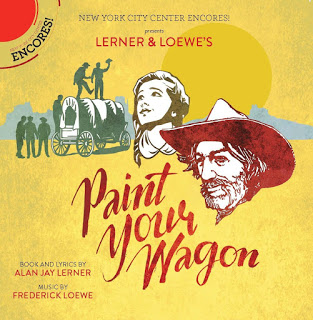 Cover for the new CD version of “Paint Your Wagon”. (Ghostlight Records)

So much was expected of Lerner & Loewe after the surprise success of Brigadoon in 1947, a wispy Scottish fable of romance and time travel contrasted with American cynicism and pragmatism. Paint Your Wagon, the team’s follow-up, contrasted America’s optimistic spirit and pioneering adventure with the harsh realities of the untamed West. If Brigadoon was a post-war dream fulfilled, then Paint Your Wagon was an American dream denied. Its central figure, gold-miner Ben Rumson, basically goes nowhere in two acts, doomed to follow his “Wanderin’ Star” wherever it may lead, boom or bust. Its secondary story, his daughter Jennifer and her Mexican lover Julio, only find happiness when they abandon the Gold Rush. Lerner was faulted by critics for the lack of dramatic tension in his story. So Paint Your Wagon was instead remembered best for its melodic score and its robust choreography by Agnes de Mille. There were three enduring song hits, “I Talk to the Trees,” “They Call the Wind Maria,” “Wand’rin’ Star,” but the rest have been largely forgotten. 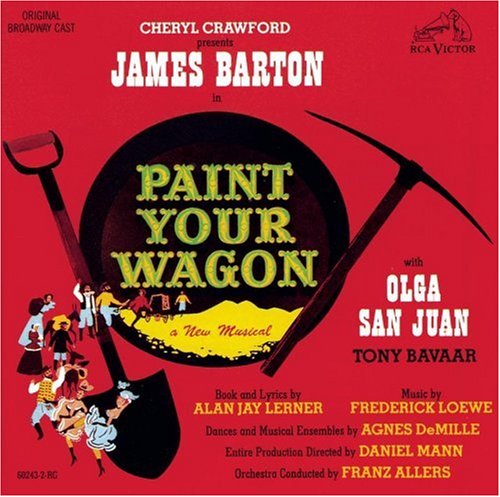 The RCA Victor original cast album of “Paint Your Wagon.”

Paint Your Wagon would indeed be lost today, were it not for its 1951 RCA Victor original cast album (41:55 in length), and its truly wretched 1969 film. That movie jettisoned not only much of Loewe’s score (interpolated 5 forgettable new songs by Andre Previn and Lerner), but also threw out the story in favor of what Lerner presumably thought was sexier or perhaps contemporary. Two miners, Ben Rumson and his partner Sylvester Newel, share the same woman, Elizabeth. Ah, bigamy! Wife-swapping in the 1850s! Yeehaw!! 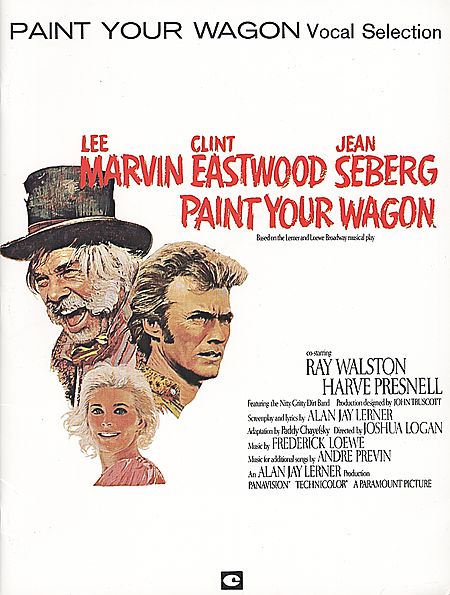 Vocal Selections for “Paint Your Wagon” with the stars of the film version.

So it is a wonder that the March 2015 Encores revival offered a concert staging of a musical whose original script and full score proved surprisingly unknown, more stageworthy than expected. This is a perfect example of what Encores’ stated artistic mission should be, re-discovering buried treasure in America’s musical theatre archive that would otherwise never warrant a full-scale staged revival. How ironic it is that Encores’ 1996 revival of Chicago is still running on Broadway today and throughout the world, subsidizing future Encores revivals…

The new 2015 Encores’ Paint Your Wagon cast recording CD (78:34) offers the listener nearly 36 more minutes music than that contained in the 1951 original, constrained then by what could then fit on a single LP. Many are the joys of hearing a full overture, entr’acte and all the Trude Rittman dance music in “They Call the Wind Maria,” “Whoop-Ti-Ay!,” “There’s a Coach Comin’ In,” Act 1’s Finaletto danced not sung, “Hand Me Down That Can o’ Beans” and its Rope Can Can, and “Movin’” in Act 2.

Encores’ three principals could not be bettered vocally, and offer definitive performances that transcend their predecessors effortlessly.

Keith Carradine as Ben Rumson could easily have been a drunken bore, but Carradine captures Rumson’s folksy charm, his pragmatism, his kindness as a father beneath the gruff exterior. Alexandra Socha made plausible her ludicrous role as Rumson’s daughter Jennifer, exasperated by the lecherous glances of all the desperate men around her. This theatrical conceit might have been funny or charming in 1951, but now seems merely foolish or silly playwriting. Transcending stereotype, Justin Guarini as her Mexican lover Julio accords her the respect and kindness she craves, but Lerner’s libretto never fully explores the explosive potential of a Latin-Anglo romance in a mining town in 1853. The only other voice to stand out is that of Nathaniel Hackmann, who plays Steve Bullnack, leading the miners in “They Call the Wind Maria.” Although dramatically incidental to the story, his compelling rehearsal video of the song was widely publicized by Encores in advance of the Encores staging on line and YouTube.

Broadway Masterworks columnist Peter Filichia has also pointed out that conservative airplay requirements of the 1950s un-necessarily sanitized much of Lerner’s wise and witty lyrics on that first RCA Victor recording. The palpable sexual tension that drives Jennifer’s two solos “What’s Goin’ On Here?” and “How Can I Wait?” had been suppressed into tomboyish energy in 1951, but now emerges with vivid charm. Likewise, the discreetly-titled “Trio” between a traveling Mormon and his two bickering wives, is now revealed as a comic gem. But the three famous songs get stunning renditions on the new recording. Hackmann’s stirring hymn to to Wild West, “They Call the Wind Maria,” has never sounded more compelling in its evocation of men in search of adventure and gold. Its counterpoint or rebuttal can be heard in Carradine’s bittersweet “Wandrin’ Star,” in which the dashed hopes of the Gold Rush doom Ben and men like him to a journey without end. The Latin-themed “I Talk to the Trees,” better known as male solo from many pop recordings, is Julio’s dream he shares with Jennifer, a real charmer of a song. 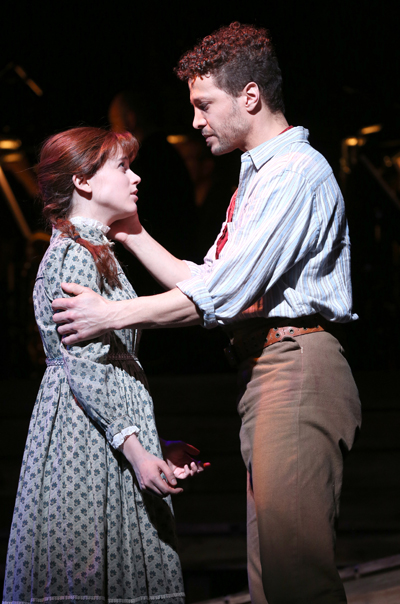 But Paint Your Wagon offers us many surprises among the lesser known songs. Carradine’s affectionate recollection of his first wife, “I Still See Elisa” was never the song hit its authors expected, despite cover recordings from the likes of Ezio Pinza and Nat King Cole. Since Ben Rumson in the next scene offers to buy his next wife from the Mormon who has two, I’ve often questioned the song’s placement for its insincerity. Carradine also mines the lusty humor and personal charm in his soft shoe solo “In Between,” whereas James Barton’s rendition sounds inconsequential. Nor did Jennifer’s Act 2 solo, “All for Him” ever did acquire a life outside of the show, but it effectively defines her loyalty to Julio despite their separation over time and great distance. Nor did Julio and Jennifer’s love duet “Cariño Mio” become popular, perhaps because its bilingual sweetness tethered it so closely to the  plot. The great undiscovered gem is “Another Autumn,” a surprisingly serious male duet exploring the loneliness of the miner’s life without a woman.

Paint Your Wagon has always suffered from a surfeit of male ensemble numbers which blur into a sameness, be it “I’m on My Way,” “Whoop-Ti-Ay,” ”There’s a Coach Comin’ In,” “Hand Me Down that Can o’ Beans,” “Movin’,” even the repeats of “Rumson” from Carradine alone. However, they are superlatively sung on this new recording, and effectively capture the male-dominated culture of the Gold Rush. Much of the credit for the recording’s success is due to Encores’ Musical Director Rob Berman who conducts with a great feeling of respect for the score. Credit also Marc Bruni’s direction, Denis Jones’ choreography, aand Marc Acito’s careful abridgement of the text.

Musical theatre enthusiasts will immediately recognize “What Do Other Folk Do?” as a pre-cursor to the later, famous duet between Arthur and Guenevere from Camelot, “What Do the Simple Folk Do?”. The twist is of course that Ben and Jennifer Rumson ARE indeed ordinary folk, whereas King Arthur and his Queen Guenevere are royalty pondering what poor folk do. Pity that there was insufficient space for other lost Paint Your Wagon songs, the duet “Sh!” (though published) which was cut from Act 1 prior to New York, and “Take the Wheels Off the Wagon” which was added for folksinger Burl Ives to sing as Ben Rumson on the first national tour in 1952.

Alan Jay Lerner attempted twice to “fix” Paint Your Wagon, first with a revised libretto for the 1952 national tour. That libretto was published in the December 1952 issue of Theater Arts Magazine, and makes for fascinating reading compared to the Broadway production as published by Coward McCann in the US, and Chappell in the UK. The dialogue and dramatic tension have been sharpened perceptibly; “All for Him” was dropped, and “Take the Wheels Off the Wagon” added. As welcomed as the 1952 version was, it has not been performed since, whereas the stupidity and misogyny of Lerner’s 1969 screenplay is unconscionable. More recent revivals in 1992 at the Goodspeed Opera House in East Haddam, Connecticut, and 2004 in Los Angeles have attempted to fix the story. And now as I write this, Seattle’s Fifth Avenue Theatre is premiering its own Paint Your Wagon with a new book by playwright Jon Marans. Watch out, that Gold Rush may yet find a happy return for Paint Your Wagon. 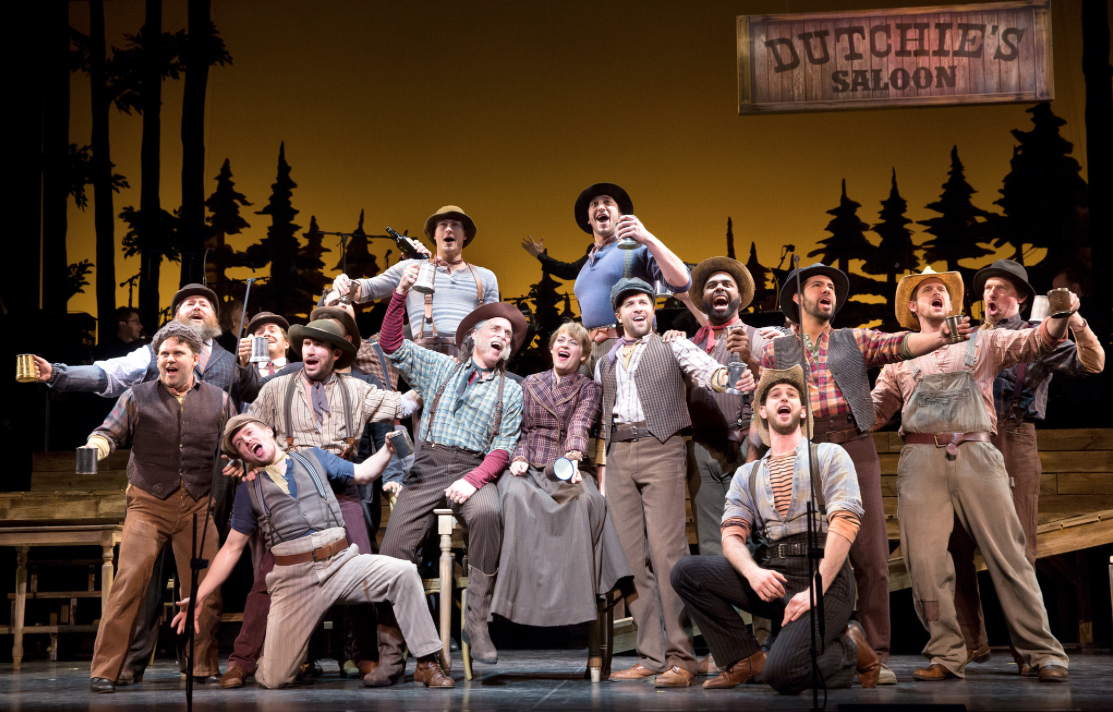