Wilton’s Music Hall is “the most important surviving early music hall to be seen anywhere” (says the Theatres Trust) and lies about ten minutes walk east from The Tower of London. Its origins date back to five terraced houses built in the 1690s, which are still used as the theatre’s entrance, box office, dressing rooms, bar etc. The shoe box style auditorium was built at the back of these houses in 1859 by John Wilton to provide ‘glamour’ for the working class of London’s East End. This lasted until 1881, having survived a serious fire in 1877. Between 1888 and 1956 the building was used as a Methodist Mission when it was due to be demolished. However, its historic value was slowly realised and a policy of ‘conservative repair’ took place, altering the fabric of the building as little as possible, until it was fully restored in 2016. For those living in Germany, the auditorium is similar in size and shape to that of the Royal Theatre at Bad Wildbad, today seating less than 300. 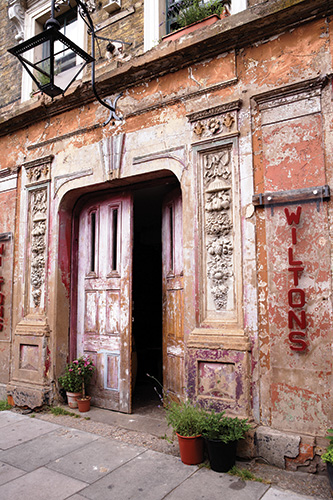 Parts of the theatre (those not actually falling down!) were used by Broomhill Opera between 1999 and 2004, but Opera Della Luna is the first company to regularly stage operetta there. The stage is difficult to use as it is not only shallow, but also nearly 2 metres high from the flat auditorium floor. Therefore an apron stage has been added at a lower level. If there is an orchestra it has to be accommodated at audience level to the right of the stage.

This year, Opera Della Luna is celebrating its twenty-fifth anniversary, all under the energetic directorship of Jeff Clarke. (For an interview with Jeff Clarke about operetta in the UK, click here.) 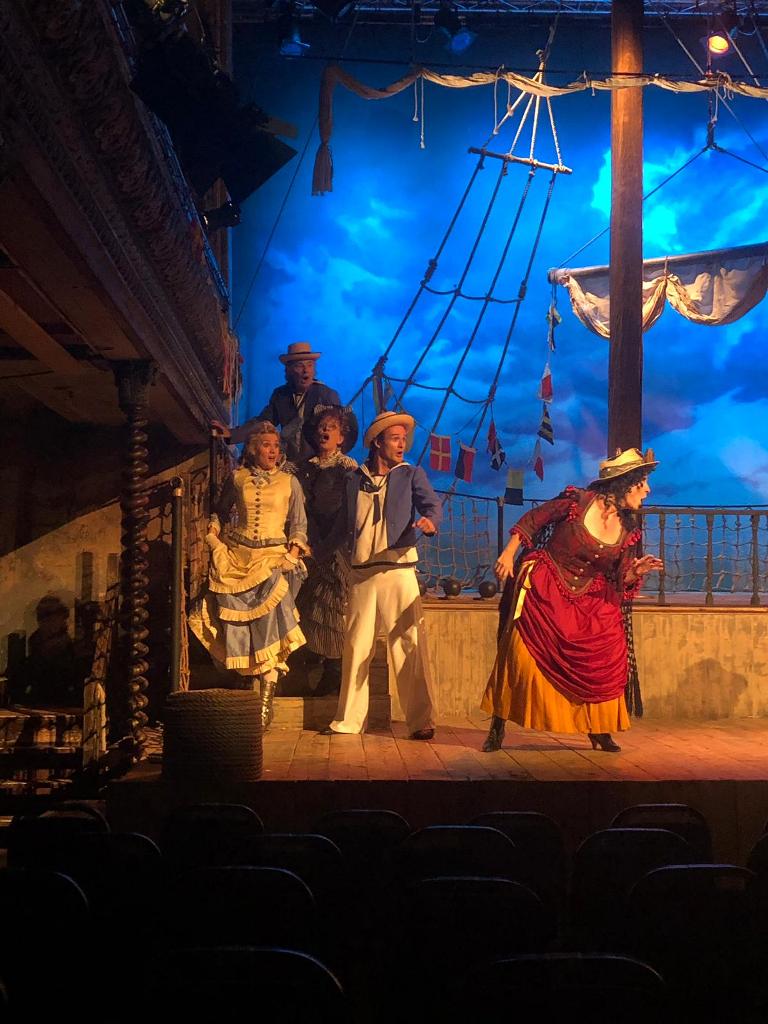 Luckily his 20 year old production of Pinafore was designed for touring to all types of venues and looked well on this stage, making full use of the two levels. It starts as it continues, exhibiting great pace and energy as the entire cast (of eight!) erects the set: the quarter deck of sailing ship HMS Pinafore, placed, in this production, in Dickens’ time.

This revival is very timely as Gilbert’s libretto focuses, even more than any other, on British class prejudice. Like Dickens, the greatest fascination is with the middle class who can quickly be elevated to luxury and elegance, yet so easily be reduced to penury and misery. Clarke’s production, offering a slightly abridged version of both libretto and music, highlights this, whilst often being exceedingly amusing, even to those who know the operetta (‘comic opera’) well. Especially impressive is the direction of the dialogue which flows seamlessly into and out of musical numbers as well as bringing out the pathos, melodrama and humour inherent in the show. 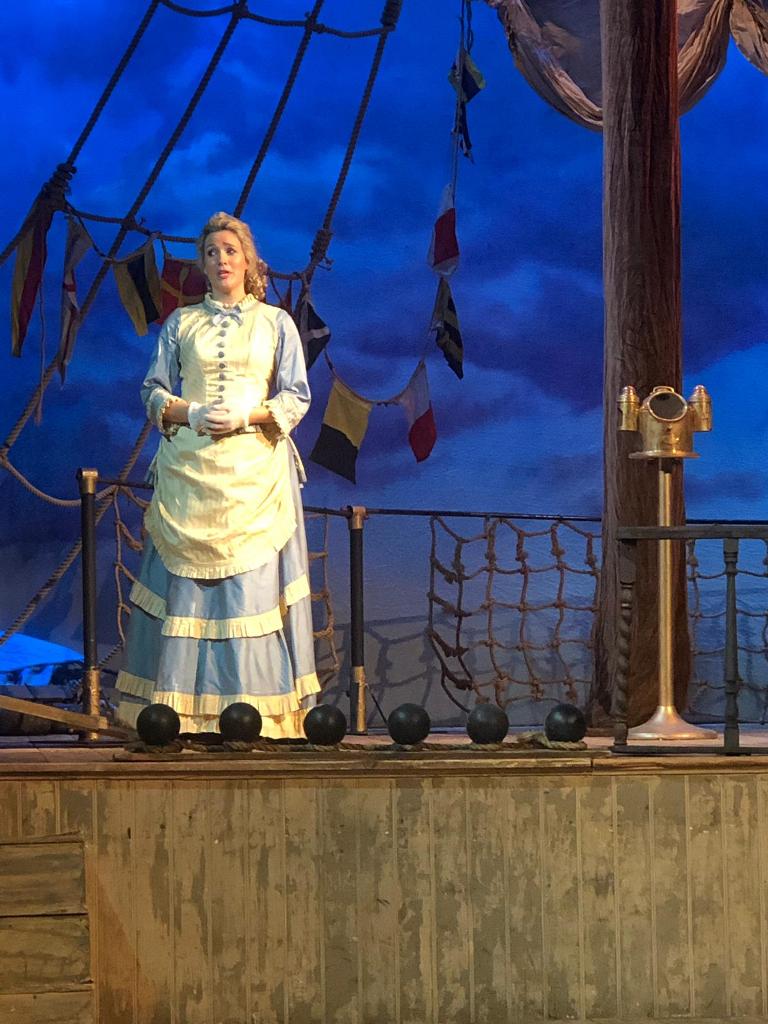 The cast, many of whom double roles and sexes is uniformly superb, being a fine team of singing actors. Matthew Siveter, long experienced as a G&S performer, had a typically stiff upper lip as Captain Corcoran as did Georgina Stalbow as Josephine, his daughter, giving a very stylish melodramatic interpretation of her second act aria, which suited Jeff Clarke’s stylised production. Louise Crane gave a well-honed interpretation of Little Buttercup, as did Martin George as Bill Bobstay, and John Lofthouse as ‘evil’ Dick Deadeye and Sir Joseph Porter’s ‘aunt’!  Sir Joseph himself, the First Lord of The Admiralty who has never been to sea (reminding one of the recent transport minister Chris – failing – Grayling in Teresa May’s government) was perhaps slightly underplayed by Graeme Henderson.

Lawrence Olsworth-Peter as hero able seaman Ralph, promoted to Captain owing to a mix-up at birth at the end of the show, demonstrated a sound knowledge of melodramatic skills, especially using his eyes to great effect. Carolyn Allen as Hebe, whom rather camp Sir Joseph eventually has to marry, because there is no one else, had her role expanded by the director using dialogue from G&S’s Patience which at least gave her some motivation! 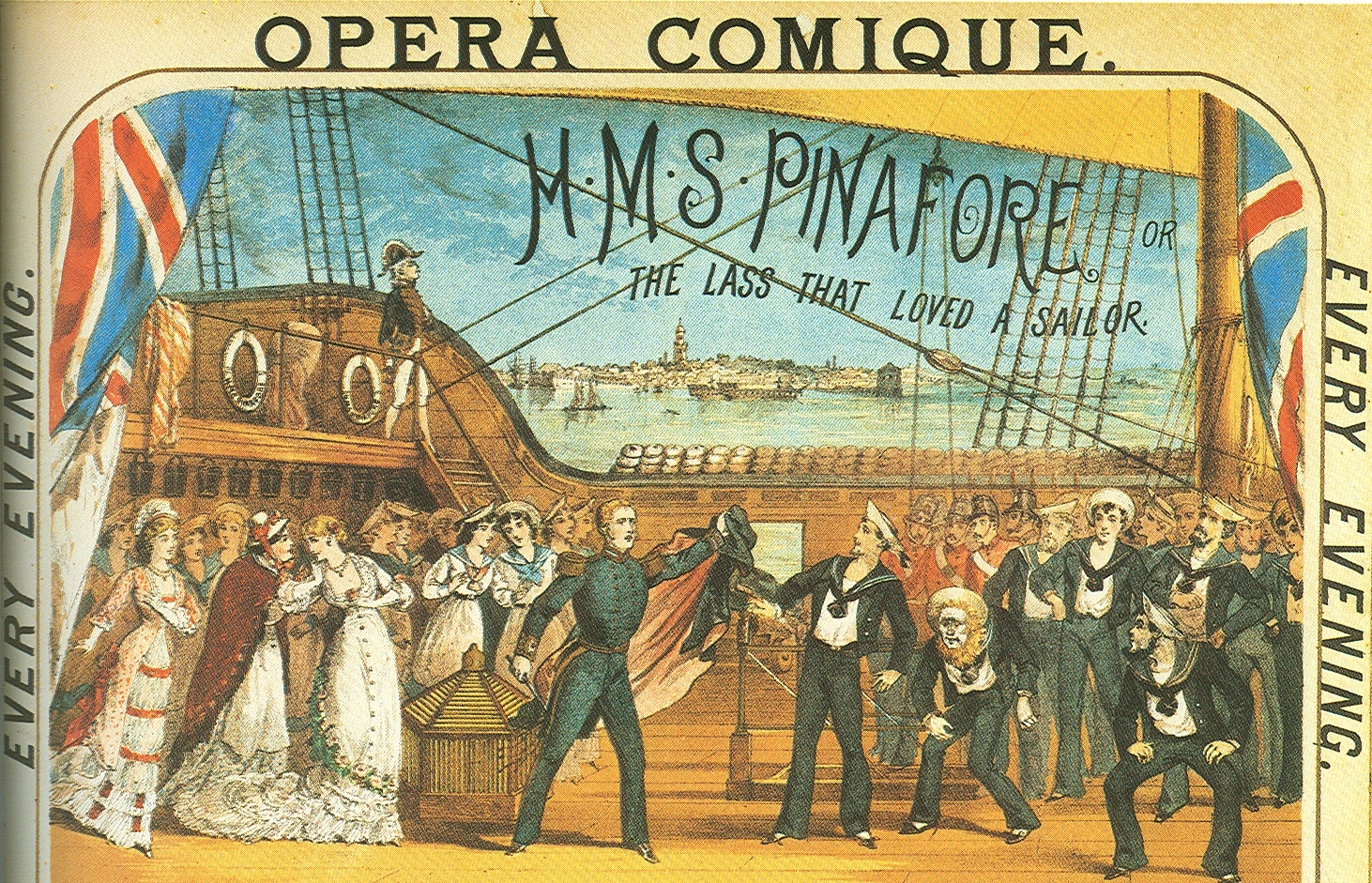 Poster illustration from original 1878 production of “H.M.S. Pinafore” at the Opera Comique.

It is easy to forget how good Sullivan’s music is for HMS Pinafore. Every number is inspired, being exactly what is required at that particular moment in the plot: for example ‘For He Is an Englishman’ where Sullivan is able to find exactly the right pseudo-patriotic and memorable melody. The original 1870s productions inspired ‘Pinafore Mania’ both in London and especially in New York where there were several theatres playing different ‘pirated’ versions at the same time, there being no copyright laws in the USA. 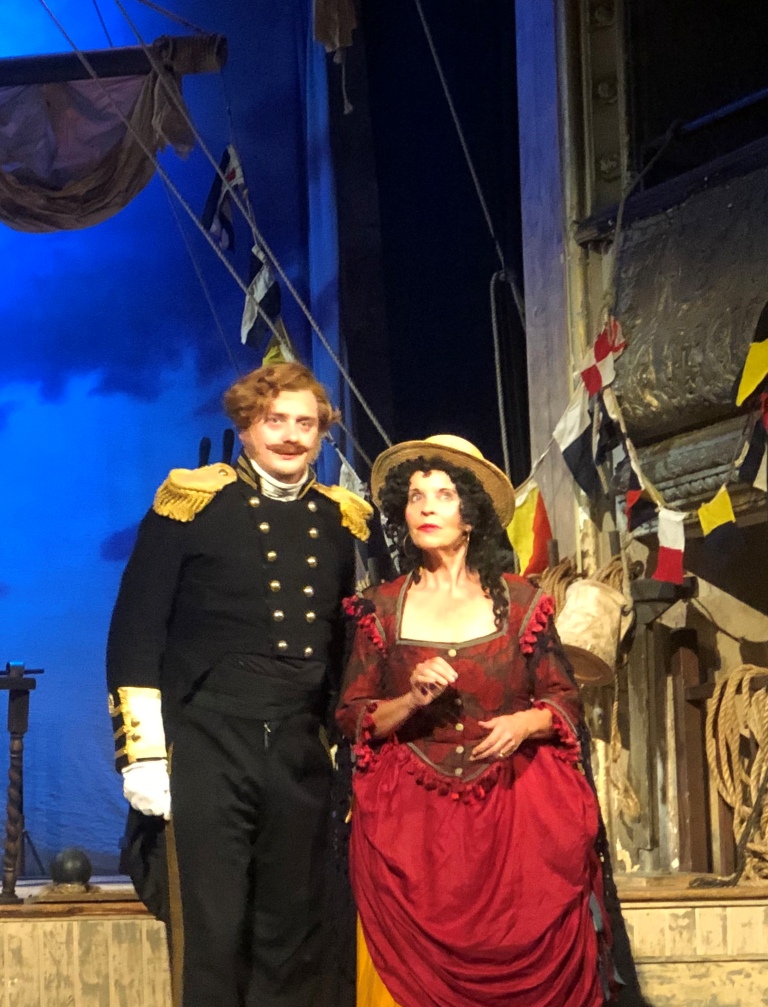 In this production, musical standards were very high under the direction of Michael Waldron, the orchestra of seven, all dressed in uniform, giving a ‘Palm Court’ style rendition of the music with great enthusiasm. 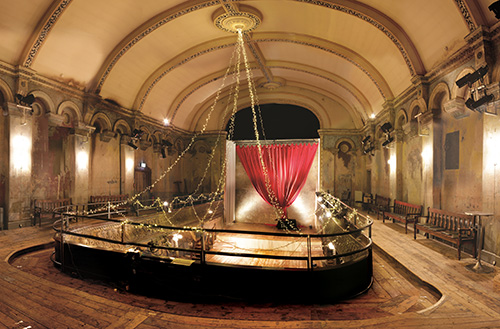 The previously mentioned set was cleverly designed by Graham Wynne, costume design was by Nigel Howard and the ever inventive choreography by Jenny Arnold.

This production of HMS Pinafore really worked, especially in the intimate setting of Wilton’s Music Hall.