It’s a daring and adventurous undertaking: while everyone else is busy with “The (New) Twenties” these days, Komische Oper Berlin is “One jump ahead of the hitmen” and “One hit ahead of the flock” as Aladdin would say. So instead of reviving more Weimar Republic material, Barrie Kosky’s company presents German entertainment music from the 1930s and 40s, seen by some as highly toxic because of the political situation in which it was created, and beloved by others as a nostalgic memory of a few moments of escapist happiness in the midst of Nazi terror. 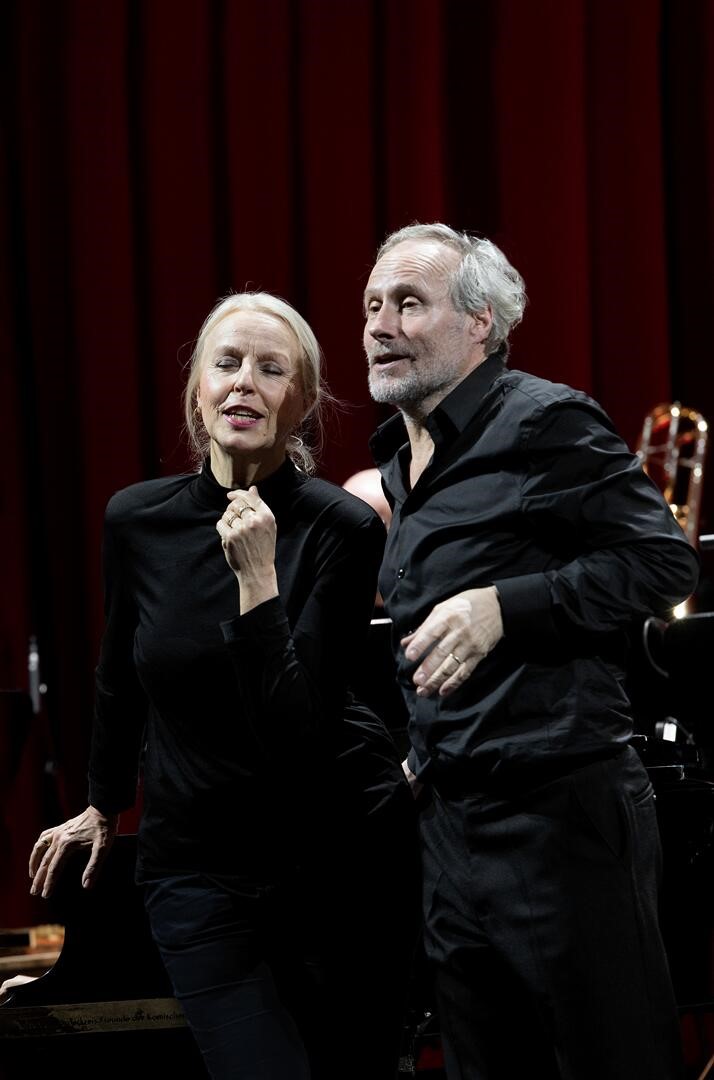 Many people outside of Germany will probably not know the songs written for Nazi movies such as La Habanera (1937) or Der Blaufuchs (1938), not to mention Glückskinder (1936) and Hello, Janine! (1939). The hit songs from these films, such as “Musik! Musik! Musik!” and “Ich wollt’ ich wär’ ein Huhn” created a carefree soundtrack for German everyday life, at least for those who were allowed to stay in Germany. After 1945 these movies and their popular music were a regular feature on West-German TV and radio, up until the 1990s.

Today, a younger generation hardly knows this material, or if they recognize a melody they often have no idea what the historical background is.

For this Liederabend entitled Ich wollt’ ich wär’ ein Huhn (after the 1936 song by Peter Kreuder) musical director Adam Benzwi and Barrie Kosky in charge of the “scenic arrangements” chose not to create a pedantic history lesson. Instead, they mix these numbers from 1933-45 with music written before and after the Nazi regime, e.g. Werner Richard Heymann’s “Die Kälte” (1921) or Otto Reutter’s “Suschen, ach” (1927), to show how traditions continued, but also how the wittiness of German Schlager was driven out by the Nazis, in favor of total nonsense lyrics that steered clear of anything “problematic.” And certainly as far away from anything that might be seen as “political.” (Which is why these songs were able to survive the Nazi era easily.)

On the other end of the spectrum, you get numbers by Hanns Eisler written with Bertold Brecht in exile, such as the 1939 “Über den Selbstmord” (“About Suicide”) or a song from the 1949 Herr Puntila und sein Knecht Matti, also by Brecht with music by Paul Dessau.

Such a reframing of songs like “Der Wind hat mir ein Lied erzählt” and “Lili Marleen” works miraculously well. And inserting a song like “Ein Koffer spricht” about the old man with a (yellow) star is almost heartbreaking in the midst of all this seemingly “fluffy” Nazi era entertainment.

Of course it takes first class artists to pull this concept off on stage. And Komische Oper offers two new names that are so far not associated with their company. First of all, there’s internationally renowned mezzo Anne Sofie von Otter. She already presented music from Theresienstadt on CD, she sang Kurt Weill and Offenbach, ABBA and Elvis Costello. Here, she’s an outstanding vocal interpreter of this diverse selection of songs. 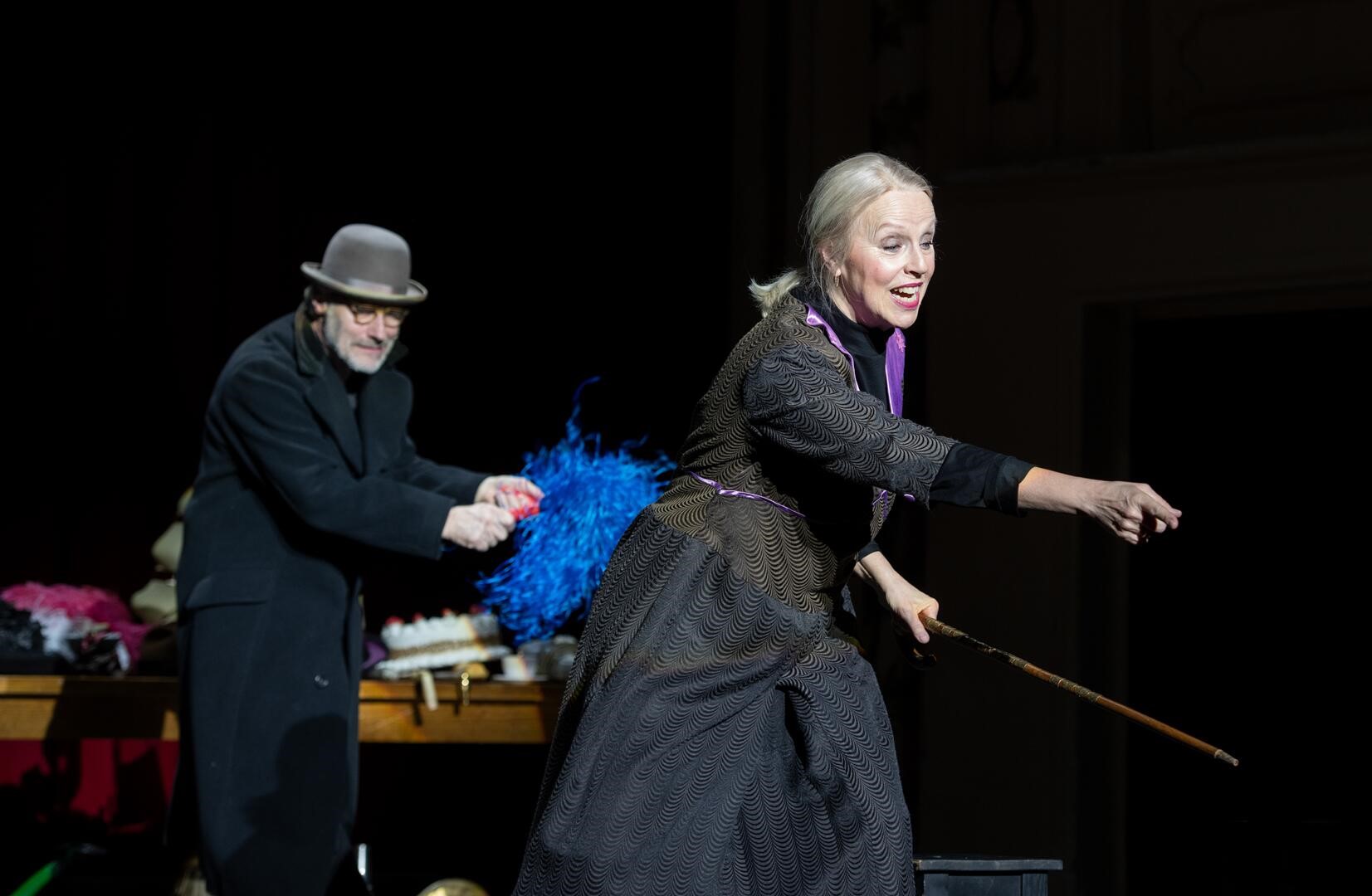 It’s obvious from the start that pianist Adam Benzwi worked with her intensely, because I’ve never ever heard any of these songs with so much nuance and attention paid to every word and phrase. And when von Otter started her Kurt Weill encore “Je ne t’aime pasi” in the wrong key, Mr. Benzwi simply slipped down a few keys and improvised. It was stunning to watch – and hear!

It was also clear that this collaboration was one based on mutual respect and love. Because the arrangements by Benzwi and orchestrator Daniel Busch for a small combo and piano were tailor made for the soloists, and simply brilliant, in every way. 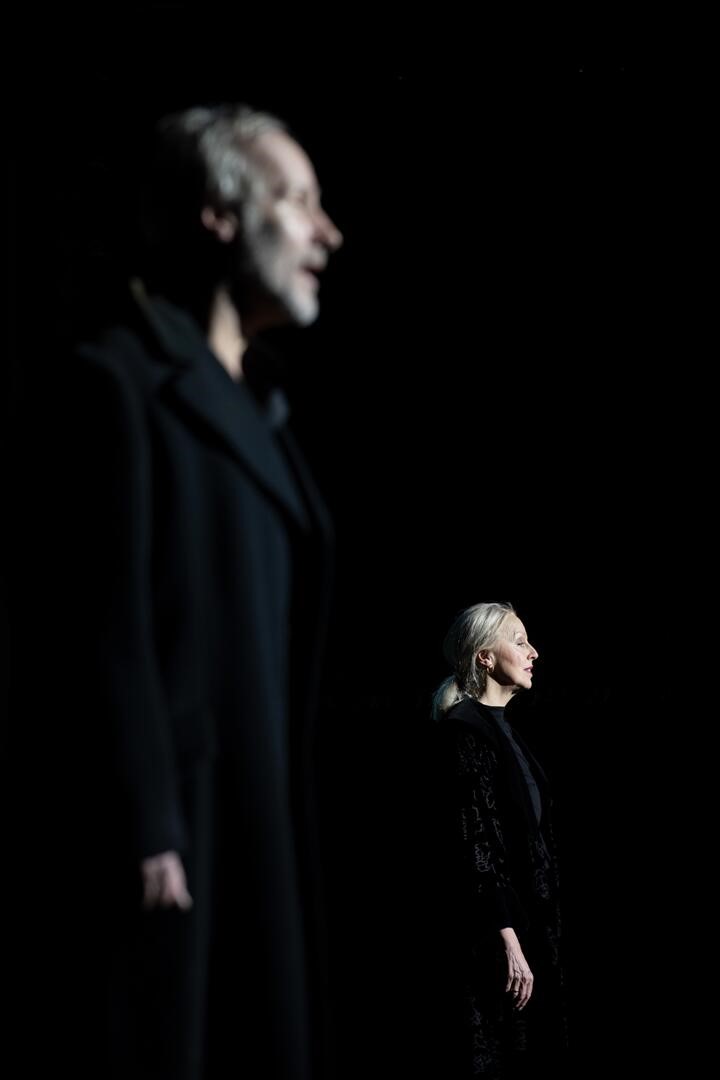 As a stage presence, Miss von Otter does not command the acting skills of other Komische Oper stars like Dagmar Manzel, but she brings a lot of élan to her visual performance. And with the right light (and microphone) there are many spellbinding moments: “Die Kälte” is definitely one of them, and the famous Zarah Leander songs “Der Wind hat mir ein Lied erzählt” is almost otherworldly, as it should be. Pure escapism, presented here with a hypnotizing siren sound that consciously evades Leander’s pathos (in the “Komm, komm” section).

At von Otters side there’s another newcomer: actor Wolfram Koch, known by many Germans as a TV star. He’s a rough diamond with a stubble beard and croaks his way through “In meiner Badewanne bin ich der Kapitän” or the Fritzi Massary number “Im Liebesfalle (Tralalala)” by Arthur Guttmann, inserted into Leo Fall’s Madame Pompadour. He’s hilarious, deeply touching, and a perfect contrast to von Otter’s poised opera voice. Plus, he commands the stage in a way that opera singers seem to not know how to.

Seeing both of them together, duetting their way through “Heut’ Abend lad ich mir die Liebe ein!” (Nico Dostal) or the title song “Ich wollt’ ich wär’ ein Huhn” is fun. While he’s always engaging with his partner, Miss von Otter is somewhat busy doing her own diva act. But it works. And that’s what’s important. 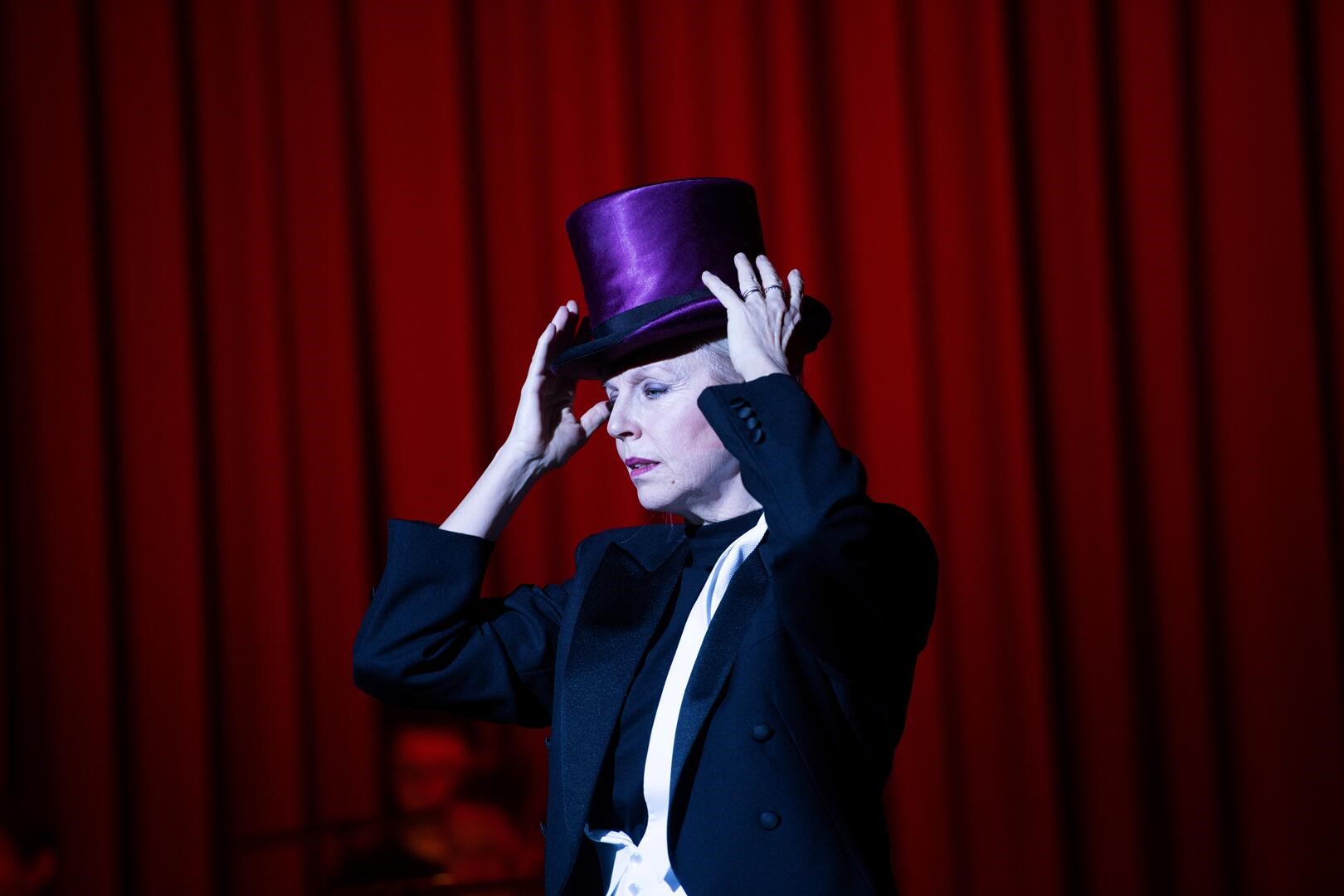 And as a special operetta treat, you don’t just get Mr. Koch singing Leo Fall, but you also get Miss von Otter singing Lehár. She presents the Richard Tauber classic “Gern hab’ ich die Frau’n geküsst” from Paganini (1925), in a sort of “masculine” Marlene Dietrich outfit (top hat and gloves) and evokes the gender bending atmosphere of Berlin in the Roaring Twenties. Just as Mr. Koch does, the other way round with his “Tralalala”. It’s a show stopper, and one of the highlights of the evening. It leaves you longing for a full Paganini production with von Otter in a cross-dressed title role, and for Mr. Koch in more Massary repertoire. (Or any operetta, for that matter!)

From Yiddish Operetta To Nazi Schlager

Komische Oper continues its series of Lieder programs with this 1930s and 40s song selection, after previous evenings dedicated to Kurt Weill, Mischa Spoliansky, Yiddish operetta, and now … Nazi era hits. That’s definitely an amazing mix, and it’s an important one. Especially when handled so intelligently as here.

Sadly, Ich wollt’ ich wär’ ein Huhn was not recorded by the radio, and thus far there is no CD in the making either. Which is a shame because the sound and the songs are well worth an album and/or broadcast. Even more sadly, there will only be a total of three performances. 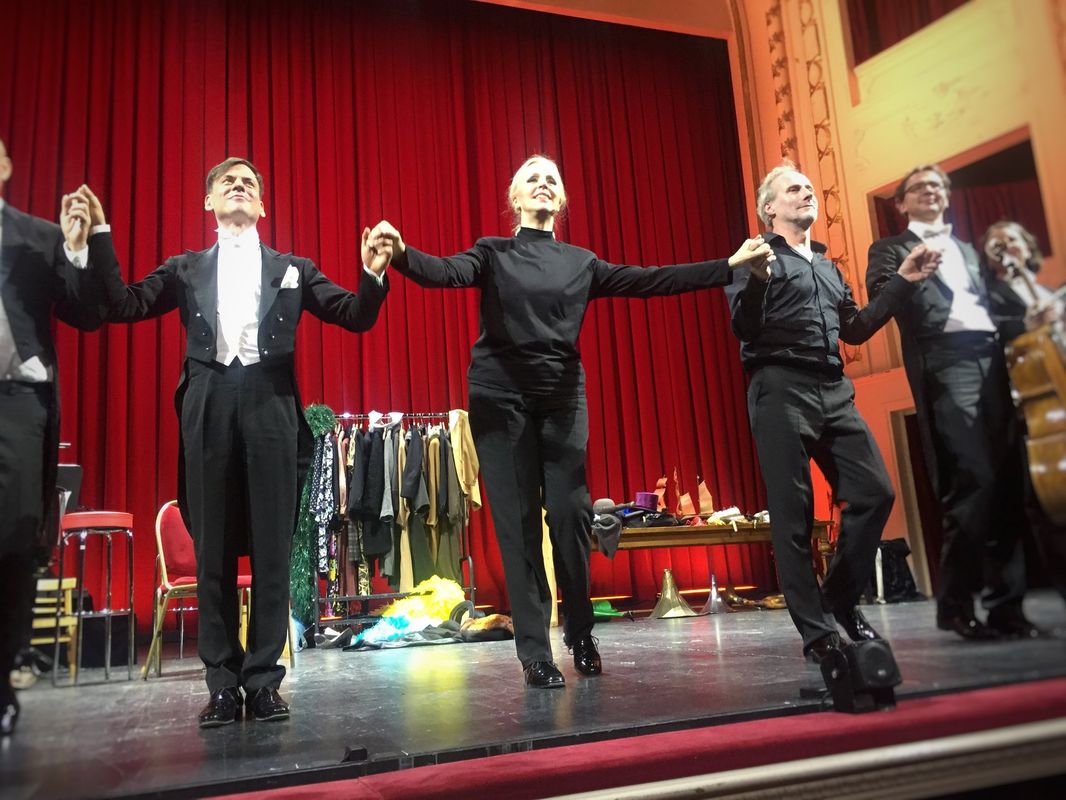 Is this because Miss von Otter is too busy? Surely she didn’t invest all this time in creating such an evening with Adam Benzwi, Barrie Kosky and Wolfram Koch to just sing it three times in Berlin and then say goodbye! Let’s hope Ich wollt’ ich wär’ ein Huhn returns sooner rather than later, to the stage in Behrenstraße in Berlin or on tour, or both.