Iolanthe is W S Gilbert’s most satirical opera. His libretto continually pokes fun at the British hereditary system, the law and the excesses of Wagner: the original Fairy Queen’s costume was modelled on the original Bayreuth Brünnhilde costume (1876) and the chorus of fairies have their own wail ‘Aiaiah Willalloo,’ no less absurd than the Valkyries’ ‘Hojotoho.’ It has even been suggested that the work contains veiled jibes at Queen Victoria (Fairy Queen) and her romantic ‘companion’ John Brown (Private Willis). Meanwhile, Sullivan’s music is at its Mendelssohnian best, even if, in the current production at English National Opera, speeds are often slow almost to the point of stopping, in the hands of conductor Timothy Henty. 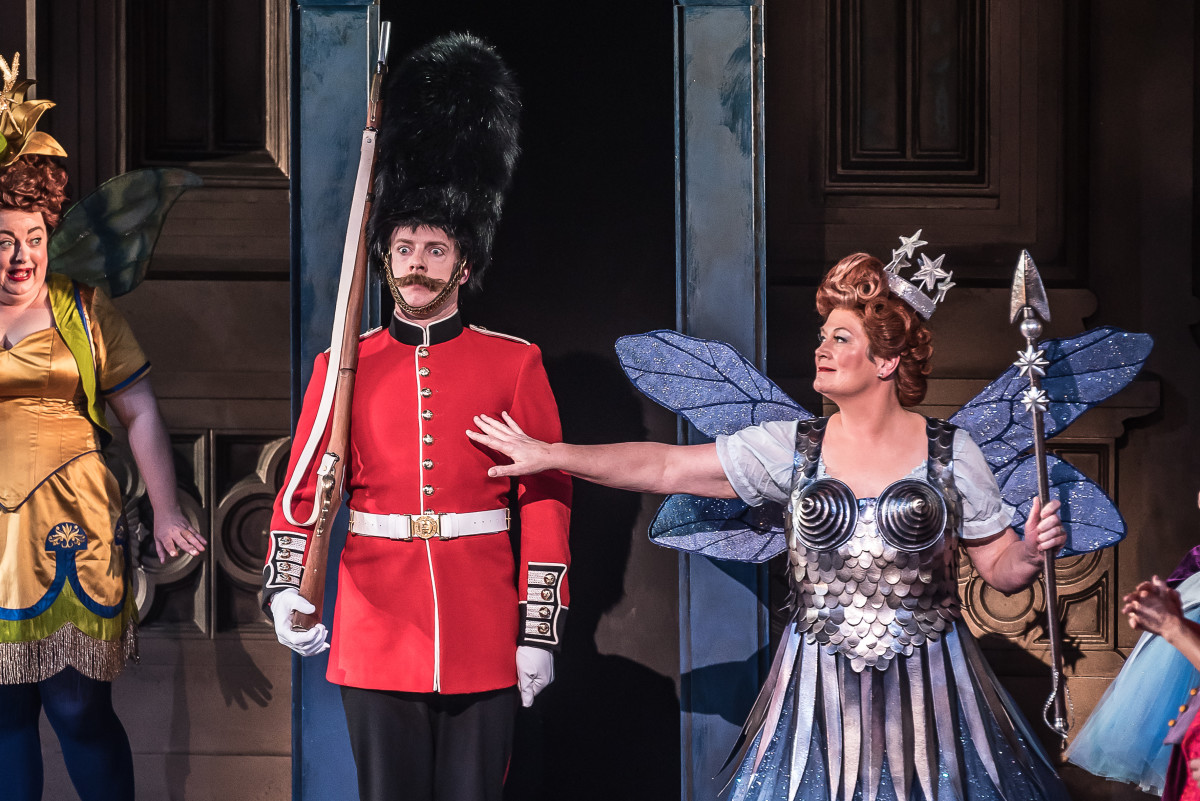 The most striking aspect of this new, much anticipated, staging is the gorgeous mock-Victorian set and costume designs of Paul Brown, who died tragically young in November 2017. The ‘fairy opera’ is set behind a gold false proscenium, lit by individual footlights (lighting design Tim Mitchell), complete with a trap which is not over-used. Painted drapes are used to suggest different aspects of Fairyland in the first act allowing the action to move smoothly from one space to another, and ensuring that the acting area is always the right size for an intimate duet as well as scenes involving the chorus, as well as being a feast for the eyes. 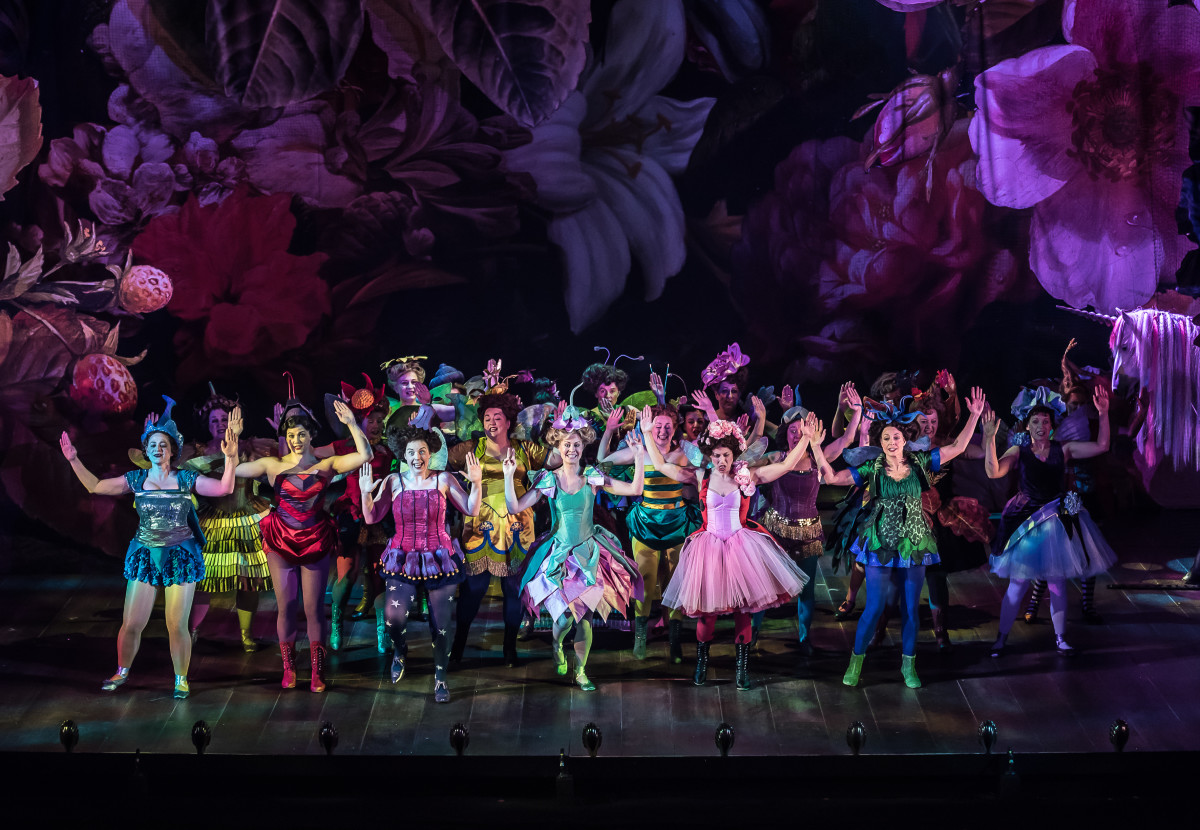 The ENO production of “Iolanthe” with the ENO Chorus. (Photo: CLIVE BARDA/ArenaPAL)

In Act Two, we realise that the gold false proscenium is actually part of the Houses of Parliament, several different scenes again being effectively and quickly established, often using striking red sofas.

Costumes are also inventive. Apart from the traditional Peers’ robes, Brown gives them very detailed black breeches for Act Two, each chorus member being treated as an individual. The ladies’ fairies costumes are equally striking, again each being different. 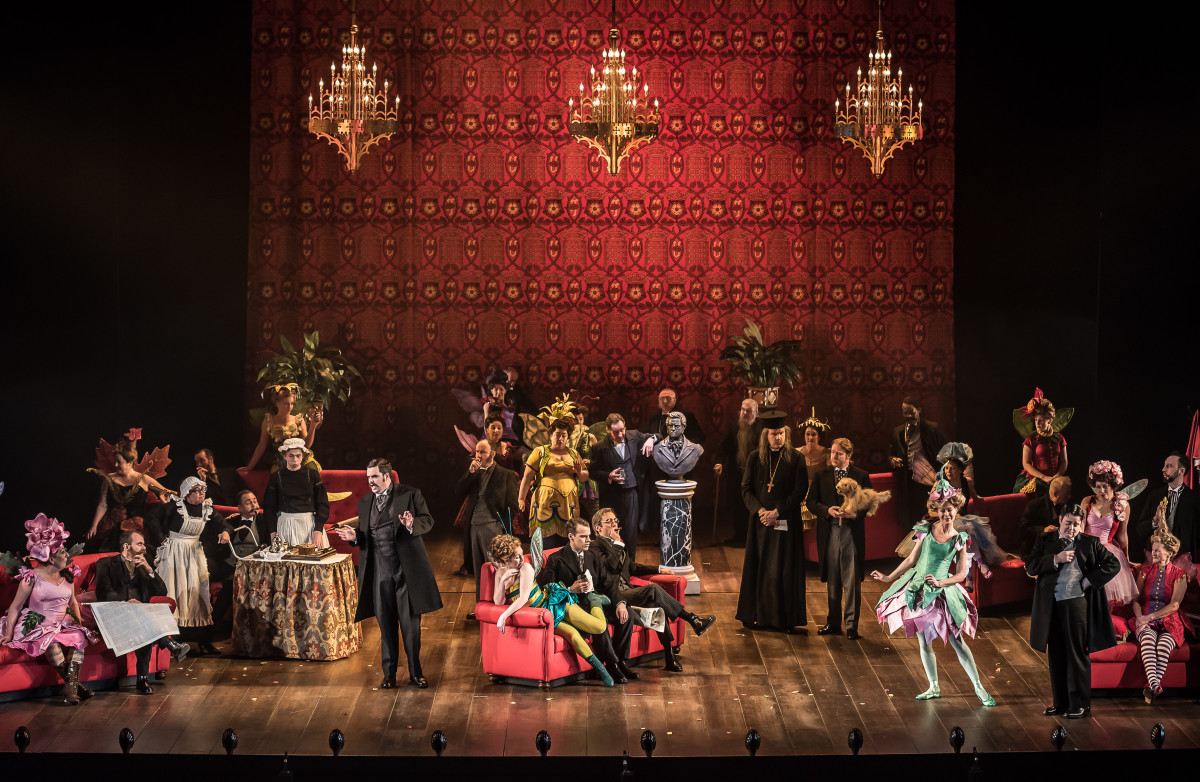 The cast and chorus in “Iolanthe” at ENO. (Photo: CLIVE BARDA/ArenaPAL)

The Coliseum has a very large auditorium, and some of the cast found difficulty in filling it, especially in the dialogue, which often felt shouted rather than projected.

Most successful in overcoming the venue’s acoustics and producing a convincing character was Yvonne Howard as the aforementioned Fairy Queen; not only did every word come over the footlights, she also contrived to look glamorous and ‘in control.’ It was a shame that, as I have mentioned above, her second act song ‘Oh Foolish Fay’ was taken at so lethargic a speed. 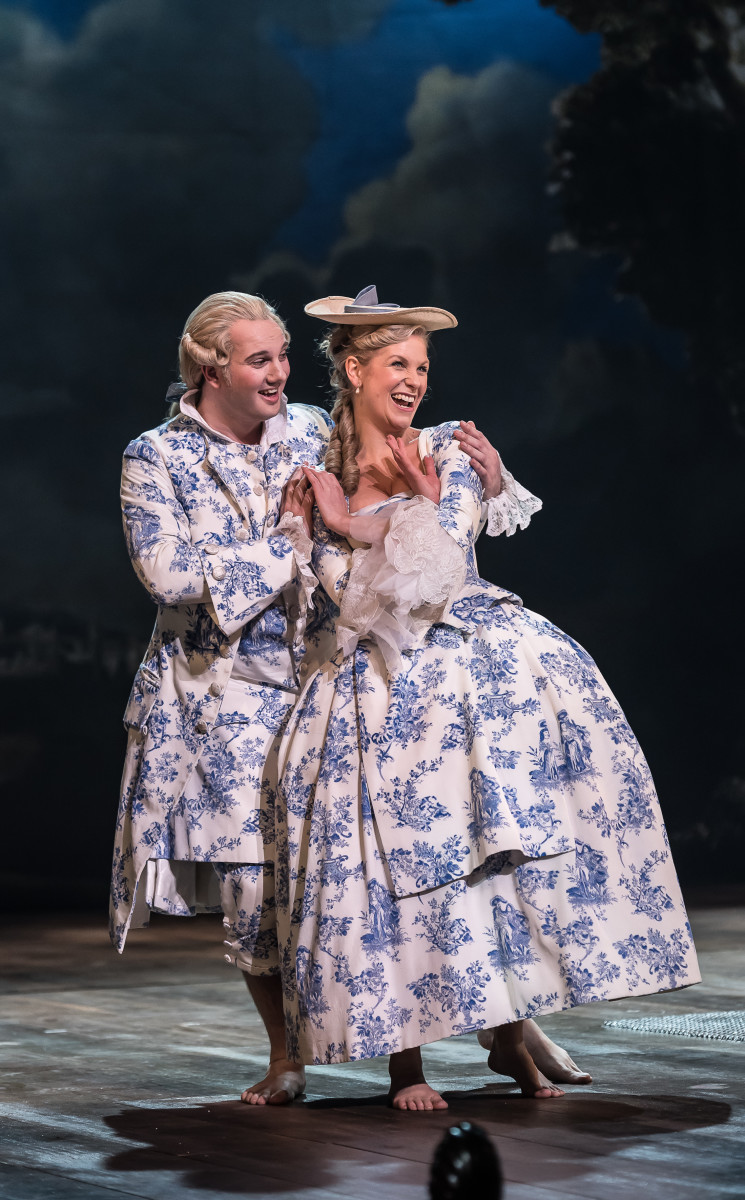 Marcus Farnsworth as the half-fairy shepherd, Strephon demonstrated a fine baritone as well as charm, besides looking suitably ‘stout’ as Gilbert asks for. Phyllis, his betrothed, was charmingly sung by Ellie Laugharne, and both looked ravishing in their matching white and blue costumes.

Iolanthe’s (Samantha Price) rich mezzo often carried to the back of the house, but she was hampered by often being asked to move flamboyantly which became tiresome and slowed the action. 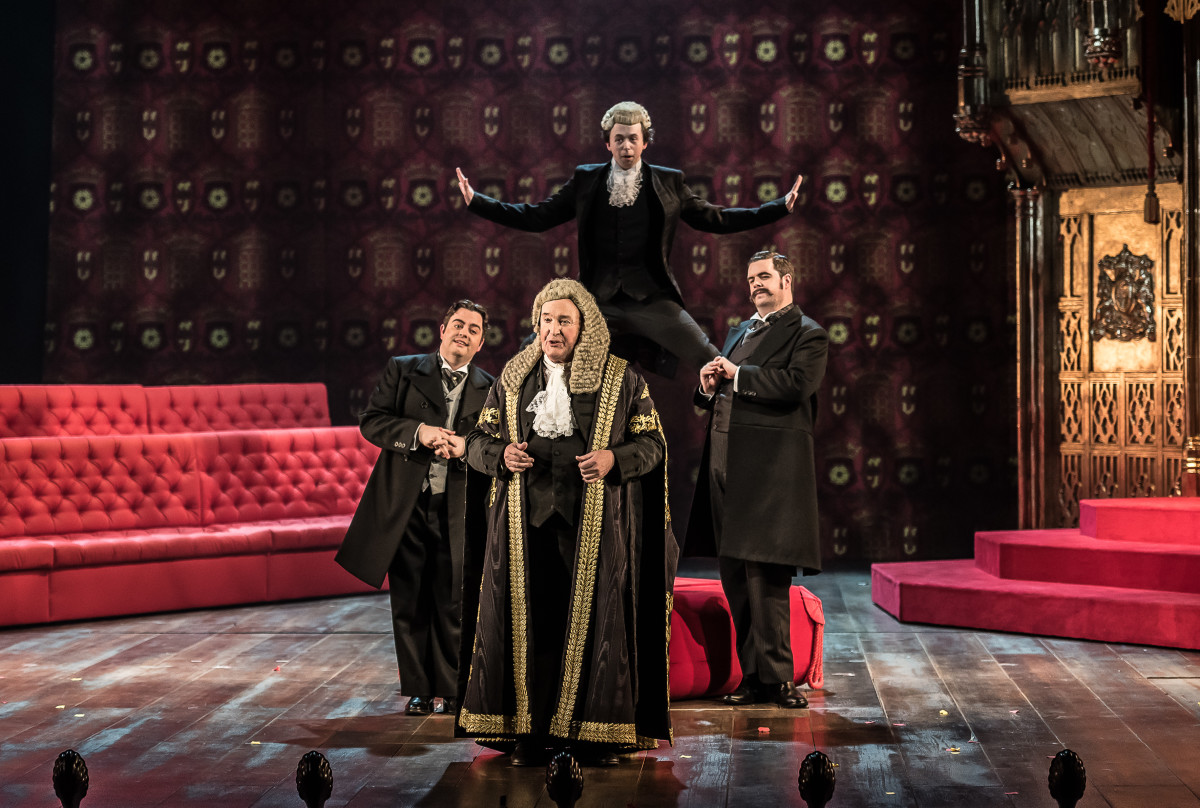 Andrew Shore, as the Lord Chancellor, did not appear on form. He seemingly forgot his words at the start of his first song and the ‘Nightmare’ song in act two was certainly no patter song at the speed he took it.

Ben Johnson and Ben McAteer, as Earls Tolloller and Mountararat, were hampered in their efforts by lots of unfunny business they had been given to do. This slowed the action to a crawl at times, whereas often these roles are the driving force of the show.

As one would have expected, the chorus work was impressive: especially in their dancing (choreography Lizzi Gee). The gentlemen’s excellent diction ensured that their ‘cut glass’ upper class accents were very evident, and great fun. 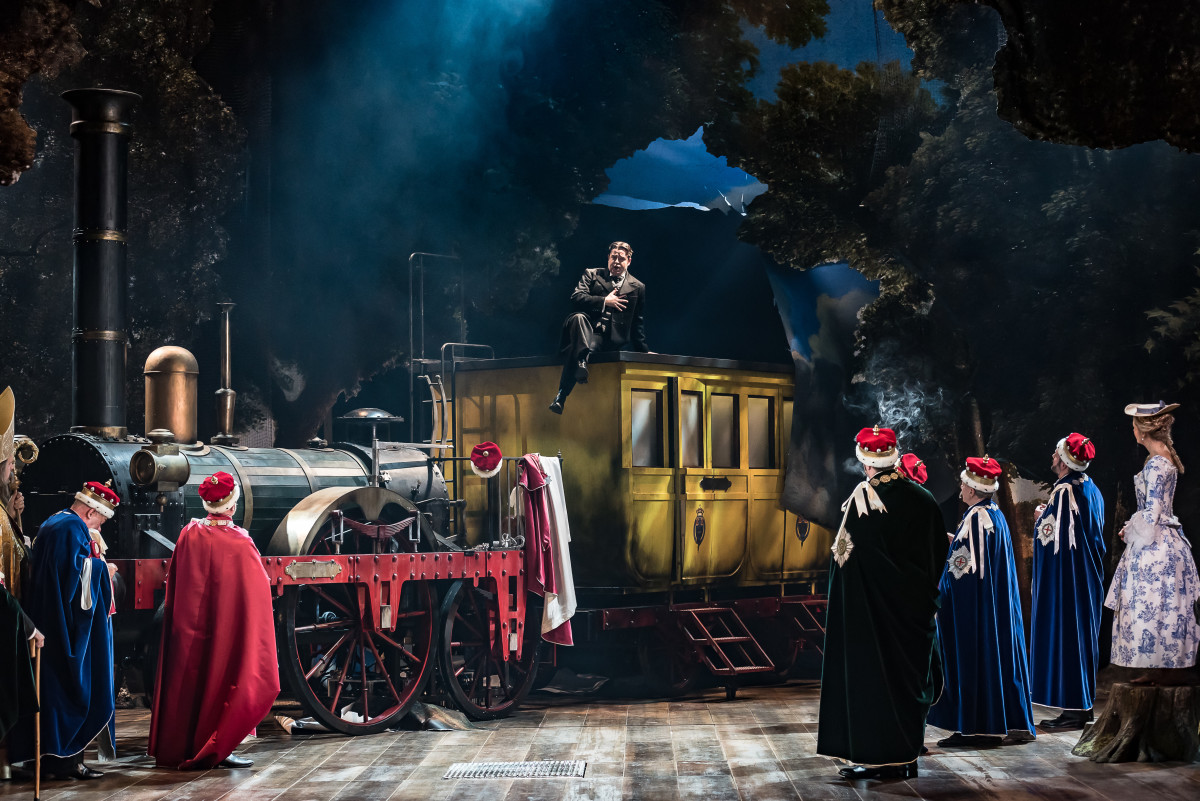 G & S seems to work best with ‘light-touch’ directing, as English Touring Opera’s recent Patience (on a much smaller budget) demonstrated. Cal McCrystal decided to re-write much of Gilbert’s dialogue, adding supposedly funny lines and pieces of business, the effect of which was to make many of the spoken scenes pedantic and lethargic. He introduced a ‘warm-up’ artiste (Clive Mantle in the guise of Captain Shaw, to whom the fairy queen sings in Act Two) in front of the safety curtain who spoke a scripted (supposedly improvised) introduction lasting over five minutes before the overture (and before Act Two!).

Much of McCrystal’s production was very traditional, with most musical numbers being sung from down centre stage straight out to the audience: very rarely did one singer actually sing to another by looking at them. This also applied to much of the dialogue, which, as I have already intimated, was very slow, lacking in motivation and energy. 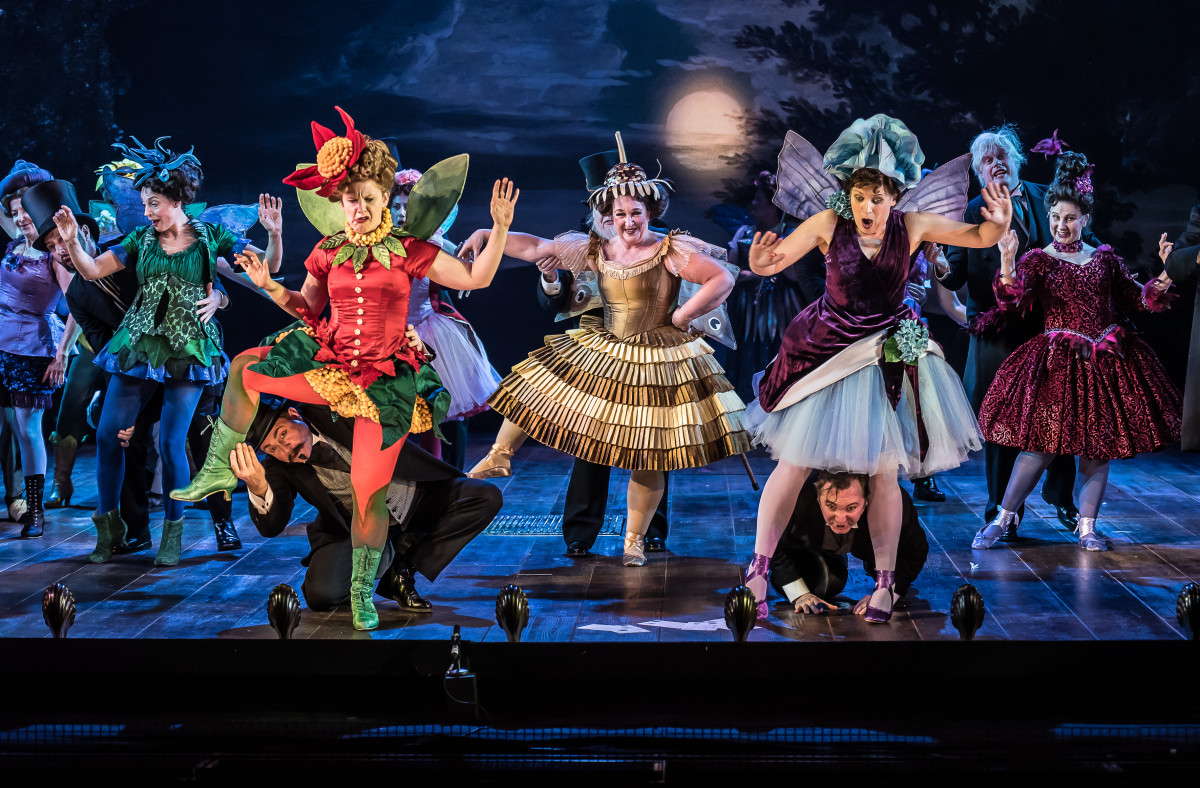 Much of this new staging is successful: one might hope that as time progresses, some of the excesses in the direction are removed so that the operetta comes to have a sense of movement and pace.