You’ll forgive me for saying this, but provincial Brandenburg and the city of Frankfurt an der Oder (next to the Polish border) are not places I’d usually associate with Jacques Offenbach and the mad-cap glittering world of opéra bouffe. Yet, the latest CD offering of noticeable interest comes from the Brandenburgisches Staatsorchester Frankfurt, conducted by Howard Griffiths. Under the title Folies symphoniques they present 12 tracks of overtures to shows that are, blessedly, not the all-time favorites and obvious first choices; those are available on countless other (very good) recordings. Instead, the listener is introduced to works worth rediscovering, among them La Créole and Geneviève de Brabant, La Princesse de Trébizonde and (one of my personal favorites) L’Ile de Tulipatan. 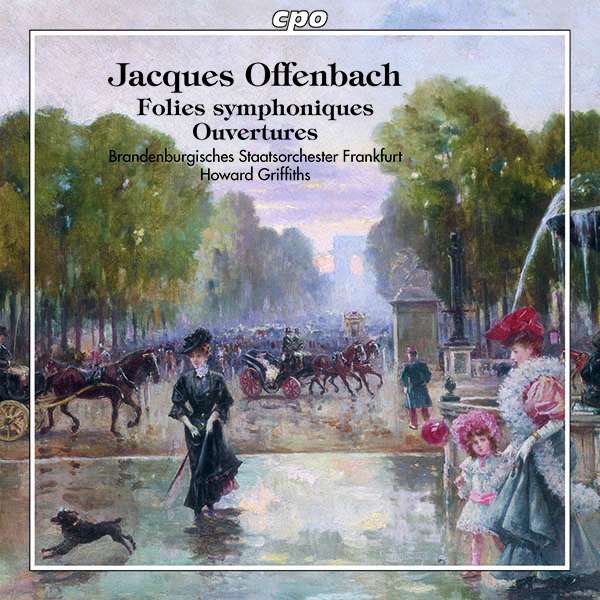 These shows are widely different in tone, some are medieval farces, some are gender bending romps on a fantasy island, others strike a somewhat exotic note, while the “chinoiserie musicale” Ba-ta-clan goes in an entirely different whirlwind direction. The Brandenburg orchestra does not noticeably try to find an individual ‘tone’ for each of the overtures, they are more or less all played in the same way. In doing this, the music is left to create its own ‘flair,’ which works well.

Generally speaking, Offenbach’s overtures are potpourris of the big tunes from the following show, they whet your appetite for the goodies that follow. They are rarely goodies themselves. (There are exceptions, obviously.) Which makes a string of 12 overtures in a row a bit ‘same-same.’ It was a good idea from the Brandenburgers to also include an entr’acte here and there, just to stir things up a little.

Personally, I would have enjoyed the odd ballet number to create even more contrast, but then again – that’s not what this cpo release is about: “The orchestral overtures brought together on the present recording make the listener eager to hear each of the particular works following them.” That’s how cpo puts it on their website. 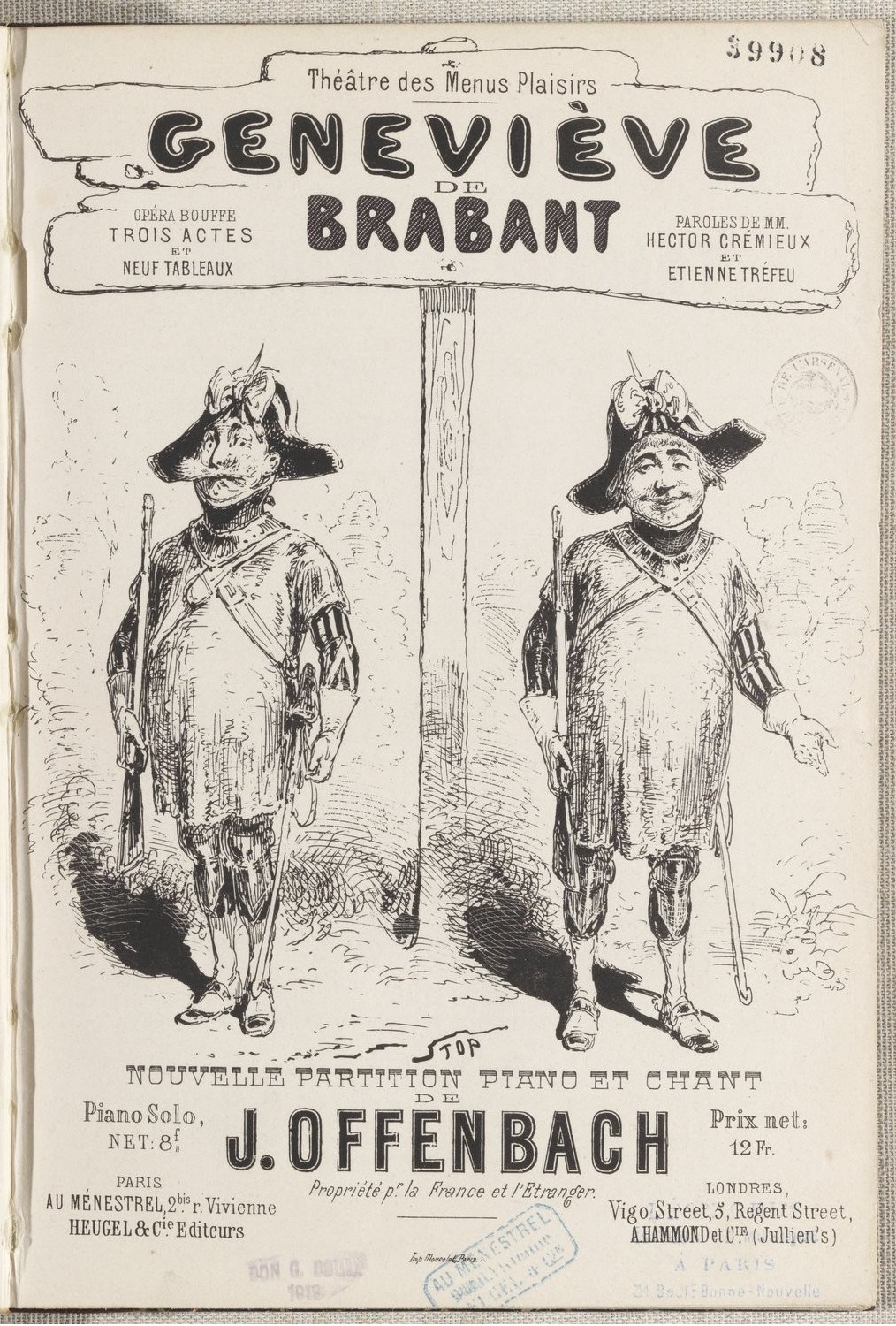 The cover of the piano score for “Geneviève de Brabant.”

In an ideal world you could go straight from listening to the overtures to the cpo store and buy the full recording of the 12 shows in question. But as we all know, that’s not possible. While there is a superlative Ba-ta-clan combined with Les Bavards (including equally superlative versions of both overtures) there are no Princesse de Trébizonde or Geneviève recordings in circulation at the moment (there are older French radio versions). I haven’t ever come across Les Bergers or La Créole.

So you could see these Folies symphoniques as inspiration for further investigation. The technical quality of the performances is very good, it’s also energetic and has a good rhythmic drive. When you get to Ba-ta-clan, you’ll notice that the overwhelming breathlessness of the old version conducted by Marcel Couraurd with the Orchestre lyrique de l’O. R.T. F. is lacking. But those are details that won’t spoil the overall enjoyment of these overtures.

If you really want to explore, cpo offers many options: the complete piano works, works for cello and orchestra, various shows they recorded (Perichole in German from Dresden) at al. They also have non-cpo recordings in the online shop, and the choices there are wild – and wide ranging. 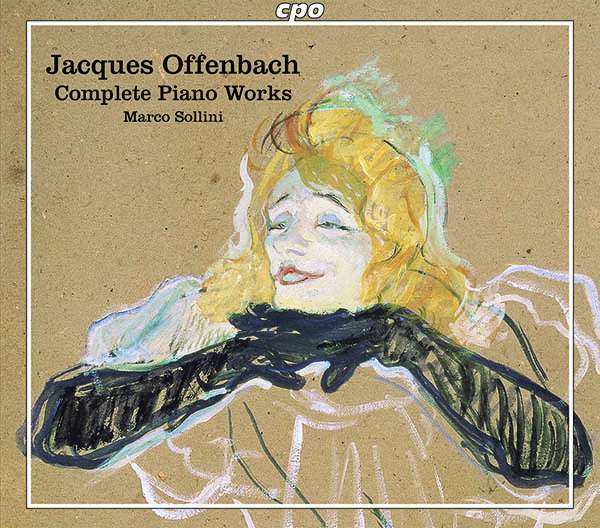 There’s a lot happening. But the focus on works that don’t require ‘singers’ demonstrates how difficult it is, today, to find truly convincing performers for all the operettas that follow the overtures selected here. It seems we have the technical possibilities – i.e. the orchestras and recording companies – to dig up forgotten Offenbach treasures, but we’re waiting for an ensemble to actually perform them in a unique way that can wow you.

The French radio had such an ensemble back in the 50s and 60s, and they used them for many Offenbach broadcasts that should be made available on CD again today! And EMI had an ensemble in the 70s and 80s, too. You could argue that they each represent a very particular style of Offenbach performance that is not without problems, but at least they had a style, with performers full of character and individuality in their voices.

I sincerely hope a new generation of operetta performers with character and personality will show up soon and will be guided into the cpo recording studio – maybe in Frankfurt an der Oder? – for recordings of all the masterworks that are out there in the Offenback Edition Keck (OEK).

“Geneviève de Brabant” as seen in an 1875 illustration.

My personal wish list is topped by the medieval ‘chastity’ tale Geneviève de Brabant. Finding that overture included here on the cpo disc gives me a little bit of hope that the day might be near when I can listen to a fully reconstructed version of Geneviève on CD, maybe also a recording of the notorious US-American version that successfully toured the United States and created a scandal at the time for “groveling in the low depths of indecency.” The music also had a surprising military career …