Just when you think there cannot, possibly, be any more Im weißen Rössl stuff coming your way – there is! In this case, Bühne Burgäschi in Switzerland will present the “Swiss answer” to the 1930 Charell/Benatzky Alpine romp: the 1934 revue operetta Grüezi by Robert Stolz which premiered at Stadttheater Zürich. The new Burgäschi production premieres on 6 June, 2019. 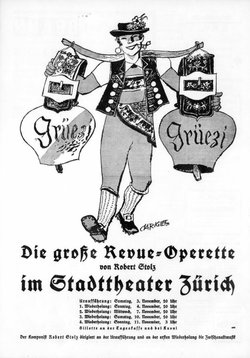 You might recall that Mr. Stolz was rather furious about the international success of Im weißen Rössl because he had stupidly sold his two hit songs (“Die ganze Welt ist himmelblau” and “Mein Liebeslied muss ein Walzer sein”) to producer and stage director Erik Charell, copyright included. He didn’t foresee that Charell’s Rössl - which premiered at Berlin’s Großes Schauspielhaus – would become one of the most successful operettas of the 20th century. As a result, Mr. Stolz got a one-time-only payment and was not included in the exploding royalties.

When The White Horse Inn came to London in 1931, Charell included another Stolz song, “Goodybe,” maybe to appease Stolz in the quarrel. It became the big hit of the show in the UK. Still, Mr. Stolz didn’t get royalties from the show itself, only for his one song. Which he considered not enough. There were never ending law suits that followed up till the 1950s, which Mr. Stolz lost, each and every one of them.

So he might be forgiven for wanting his slice of the cake. The result is a show that premiered on 3 November 1934 at Stadttheater Zürich. It was a success. One should remember that after 1933 Im weißen Rössl was hardly played anywhere in Nazi Germany, because the new political leaders of Germany considered the show a “degeneration” for mixing jazz with folklore, they also deemed the notorious bathing scene “scandalous.” Of course that was the whole point of putting dancers in bathing costumes and having them take a dip in Lake Wolfgang, showing off their immaculate physique in a wet-and-wild outfit. Charell know how to grab his audience’s attention. And sexually liberated audiences in Weimar Germany appreciated such ‘erotic’ displays.

With the Rössl more or less banned from German stages, it was Grüezi that now come to the rechristened Theater des Volkes, the former Großes Schauspielhaus. You might call this a very personal vendetta of Mr. Stolz, while Erik Charell was already in exile in the United States. Mr. Stolz was not Jewish, so the Nazis courted him. (In the end, Mr. Stolz did not give in to such courting and left Europe.) 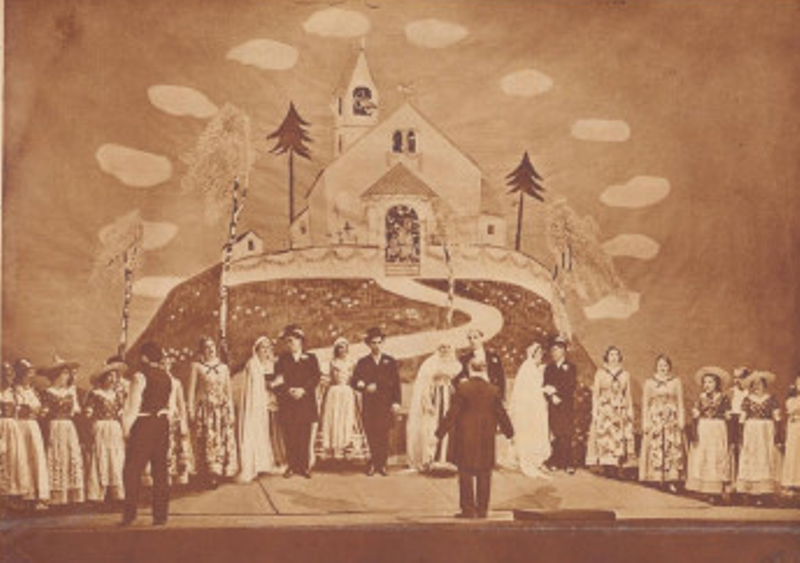 Scene from the 1934 production of “Grüezi” in Zurich. (Photo: Bühne Burgäschi)

The show has a libretto and lyrics by Armin L. Robinson and Robert Gilbert, both using the pseudonym “Georg Burkhard” to make it less obvious that Gilbert was also the lyricist for Im weißen Rössl and by that time on the run from the Nazis, as was Robinson. The Nazis would not have performed the new work had the names of Robinson and Gilbert been attached. Offering them a chance to work, and earn money, could be seen as a very collegial act on Robert Stolz’s side; in that way, Grüezi can also be interpreted as a ‘resistance’ show of sorts. Though the ‘resistance’ happened behind the scenes, not up-front on stage. 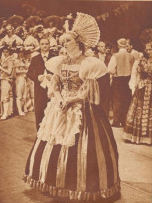 The authors set the action in Switzerland, to be exact: in the mountain top hotel “Zum Wilden Mann.” There, high up in the Alps, life was shown as more relaxed and free of political quarrel. All is well until a film team shows up and disturbes the quiet.

At the same time, the three sons of the hotel owner show up, on leave from the military. They are madly in love with the hotel’s secretary, Gritli, who in turn is much more interested in the gentlemen from the film world. They are there to film three female winners of a competition, who will play the lead roles in their movie. These girls are from Paris, Vienna, and Milan. Luckily, they are three – and there are three sons. You can work the rest out yourself. Everyone is married by the end of the show, including Gritli who ends up with a film producer.

To emphasize the Swiss element, the original poster was created by the Schellenursli cartoonist Alois Carigiet. Emil Hegetschweiler (as Blümli) and Mathilde Danegger (as Ilonka) were cast in the lead roles, both of them came from the famous (political) Cabaret Cornichons. So one may assume that some political jokes were there under the surface.

Just like in Rössl the act 2 finale of Grüezi was designed as a “Trachtenfest,” or national costume party, in which various Swiss characters appear, such as “Schwinger,” “Hornusser” and “Steinstosser.” 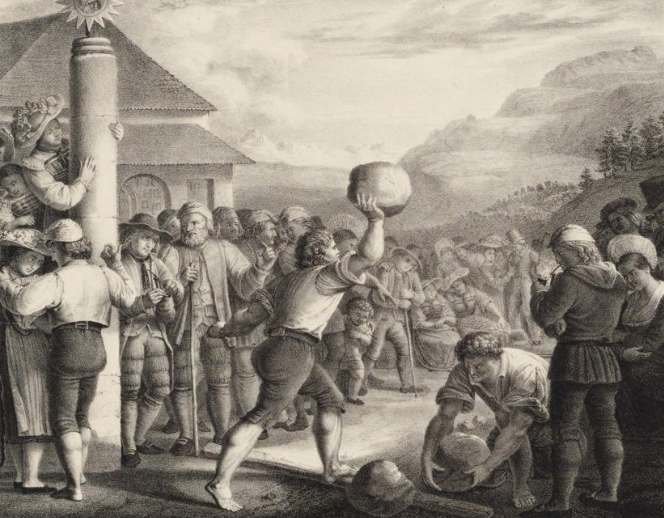 “Der Steinstosser,” a lithograph by Joseph Brodtmann after a drawing by Jakob Schwegler, 1830.

On top of all, there was a dairy maid speaking in broad Swiss dialect. She shows up during a mountain tour scene, which was, again, a direct copy from Im weißen Rössl.

There’s also a lot of musical recycling, e.g. Rossini’s William Tell overture is included in the score, as are folk songs and the Berner Marsch.

Despite or because of its success, and its use of so many Swiss elements, Grüezi sparked a controversy in Switzerland when the Swiss pro-Nazi movement “Frontbewegung” published an article in Neue Schweiz, claiming that Grüezi was “misusing some of the most sacred things of our people” by utilizing national costumes, Swiss flags and real army uniforms. According to the pro-Nazi activists, all of this “besmirched” the “holiest national symbols.” The result was a general debate about the commercial use of Swiss folklore on the operetta stage.

Still, the show ran for more than 100 performances in Zurich, Bern, Luzern and Basel, Swiss costumes kept in the production.

Under the new title Servus! Servus! it came to Vienna in 1935 for more than 50 performances at the Scala, starring Johannes Heesters. (The Austrians never much liked the original Rössl which was far too cheeky and irreverent for them, it showed the Austrians as rather simple, compared to the wise cracks from Berlin.)

The Germans rechristened it Himmelblaue Träume. After the premiere in Braunschweig in Mai 1938 the operetta was presented all over the country. The staging at the 3,000 seat Theater des Volkes was probably the most famous. 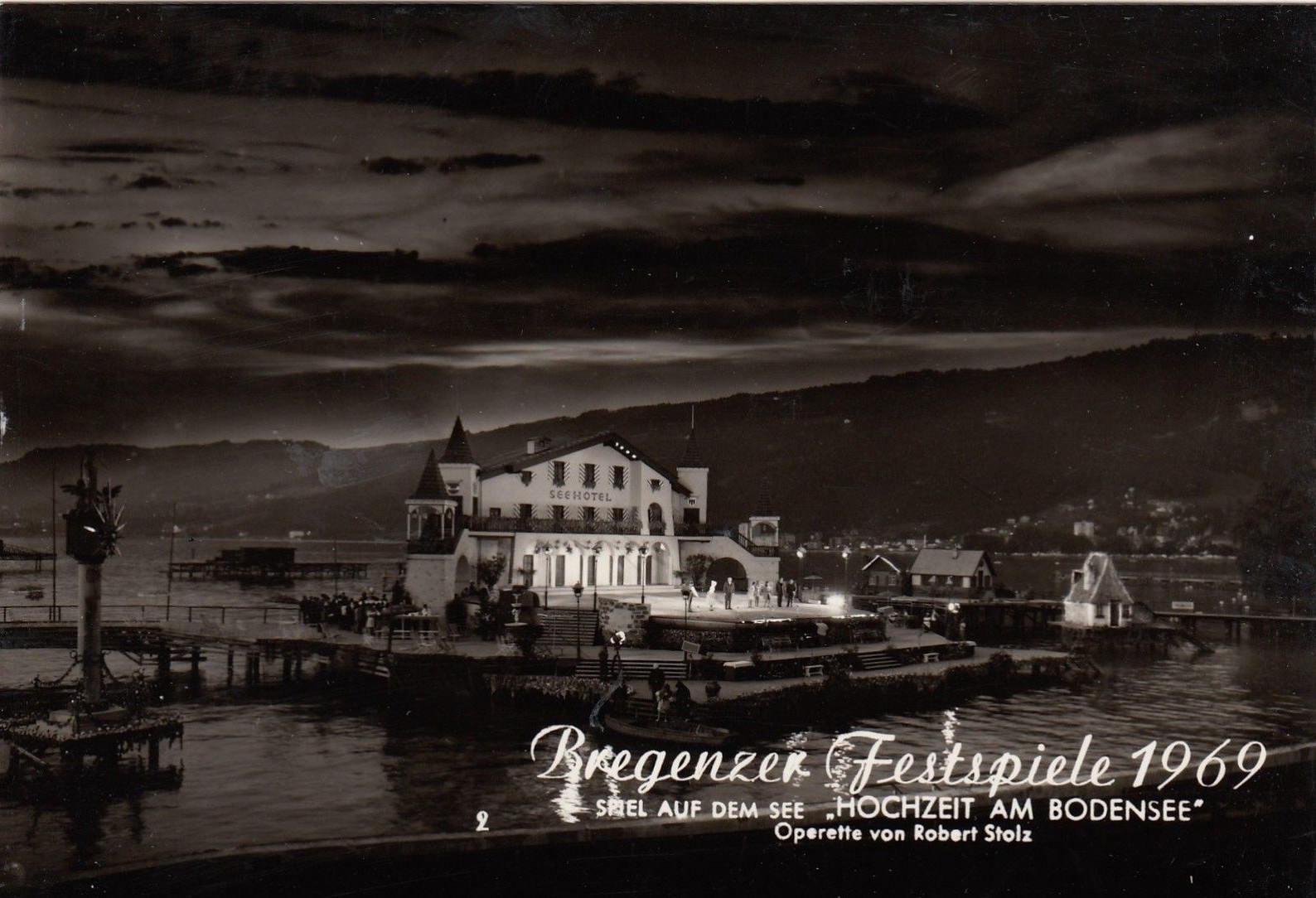 A postcard from the Bregenz festival 1969, showing the set for “Hochzeit am Bodensee.”

Grüezi later resurfaced, years after the Nazis had lost the war and Rössl had made a triumphant comeback in Germany, including two successful film versions starring Johannes Heesters and Peter Alexander, respectively. Grüezli stayed in the repertoire of Italian operetta companies until the early 1960s, and the Bregenzer festival presented it as Hochzeit am Bodensee in 1969. There are also two recordings of Himmelblaue Träume, one conducted by Robert Stolz himself in a re-arranged orchestral version with Rudolf Schock in the lead role.

Now, Burgäschi is bringing back the “original version” with full orchestra. Secretary Gritli smiles at you on the new poster. 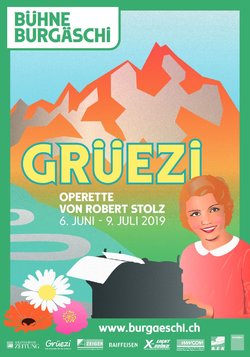 Poster for the 2019 production of “Grüezi” in Burgäschi. (Photo: Bühne Burgäschi)

There was another – politically more problematic – Nazi “substitute” for Im weißen Rössl that can hardly be counted as a ‘resistance’ work: Fred Raymond’s Saison in Salzburg or Salzburger Nockerln, published and distributed by Felix Bloch Erben, the same publisher formerly in charge of Im weißen Rössl and in search for a piece that German theaters could play who had already invested in the lavish Alpine costumes and sets for Rössl. It will not come as a total surprise to hear that Grüezi was also published and distributed by Felix Bloch Erben, together with Zürich AG. It still is, today.

Raymond’s completely harmless yodel operetta – without scandalous bathing, without sacred national symbols such as military uniforms or flags, and defintely without any jazz elements mixed with the folklore – made its own rounds, and has recently been revived by the Bad Ischl Lehár Festival, without any proper reference to the political background. Which infuriated our correspondent Emma Singer; you can read her article here.

There are a staggering 19 performances of Grüezi in Burgäschi scheduled for 2019. Melanie Gehrig will stage the show, the conductor is Reimar Walthert. Amusingly, the company managed to find a media partner in the Swisss magazine Grüezi!

While one such revival is amazing, two are even more so: at the Bernhard Theater in Zurich the Ensemble Mutz is also playing Grüezi – Der wilde Mann in April/May 2019.

It’s a staging by Ulla Schlegelberger; Robbert van Steijn conducts, the choreography for this “refreshing Swiss farce” is by Bettina Fritsche. It already premiered a year ago, in a smaller theater in Zurich and without much international noticing, and the production is now back at a bigger venue – due to popular demand. (You’ll find a review in the Swiss Tages-Anzeiger from 2018 here.)