‘Die fesche Pepi’ – ‘Jolly Josie’ – was one of the most popular and famous stars of the Viennese musical stage of her time, best remembered today for the now fictionalised-up tales of her battles with fellow star, Marie Geistinger. 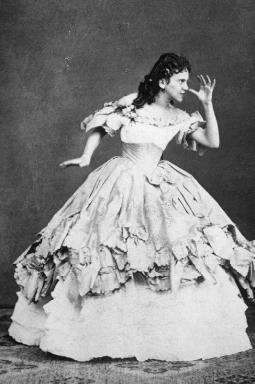 Josefine Gallmeyer in one of her many “cheeky” poses.

The daughter of theatre folk, `Pepi’ Gallmeyer began her career on the stage at 15, playing in Brünn, Budapest and Hermannstadt, making an early Viennese appearance alongside Nestroy at the Theater in der Josefstadt, and working between 1860 and 1862 at Temesvár.. When Temesvár manager Friedrich Strampfer moved to Vienna to take over the running of the Theater an der Wien, Gallmeyer was engaged to go there as soubrette, and she remained at that theatre for three years starring in such Possen as Der Goldonkel and Eine gezogene Kanone until the success of Marie Geistinger led to a well-publicized rivalry and, eventually, to Gallmeyer’s departure. She appeared in Berlin in Geistinger’s rôle of Boulotte (1867, Barbe-bleue) and on returning to Vienna joined the company at the opposition Carltheater. There she came into her own, soon challenging for the position of the biggest popular singing star in town as she featured in such rôles as Vienna’s original Gabrielle in Pariser Leben, Catherine in Toto and Regina in Die Prinzessin von Trapezunt. 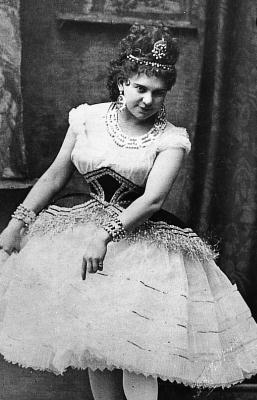 In 1874 she joined Julius Rosen in the direction of Strampfertheater, where she appeared, amongst others, as Ophelia to Felix Schweighofer’s Hammlet in Julius Hopp’s burlesque of Shakespeare, and alongside the same comedian in a local version of Die Familie Trouillat (1875) but the venture turned out a financial disaster, and she returned first to the Carltheater (Vindobona, Lucrezia in Graziella/La Petite Mariée) and then, for several years, to the Theater an der Wien to star in a series of Possen including Die Landpomeranze, Ihr Corporal, Plausch net Pepi, Die Trutzige, Die Böhmin and Die Gypsfigur, whilst also creating the rôle of Regerl, alongside Girardi, in Millöcker’s successful Operette Das verwunschene Schloss (1878) and introducing the Viennese versions of the title-rôle of La Mascotte (Der Glücksengel) and Angelina in Der grosse Casimir. 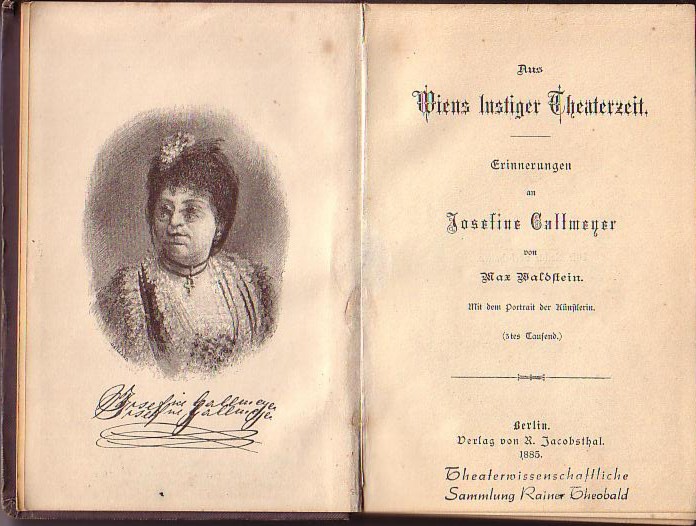 In 1882 she played in Herzblättchen at the Carltheater before following the example so successfully set by her old rival, Geistinger, and taking a tour to America. She appeared at New York’s Thalia Theater with a repertoire of her most successful pieces and a supporting company including such stars as Tewele and Knaack and, in a season dogged by absences through illness, she was seen in Der Goldonkel, Ihr Corporal, Die Näherin and Die Prinzessin von Trapezunt as well as a selection of comedies.

The illness soon proved not be a tactical one but stomach cancer and, not long after her return home in May 1883, she died. It was reported that 100,000 people followed her funeral procession to Vienna’s Protestant cemetery.

In 1905 a Volksstück, Josefine Gallmeyer, was produced at the Vienna Lustspieltheater (26 September) and in 1921 a Singspiel of the same title, written and composed by Paul Knepler, was mounted by Oskar Fronz at the Wiener Bürgertheater with Rosy Werginz playing the rôle of Pepi.