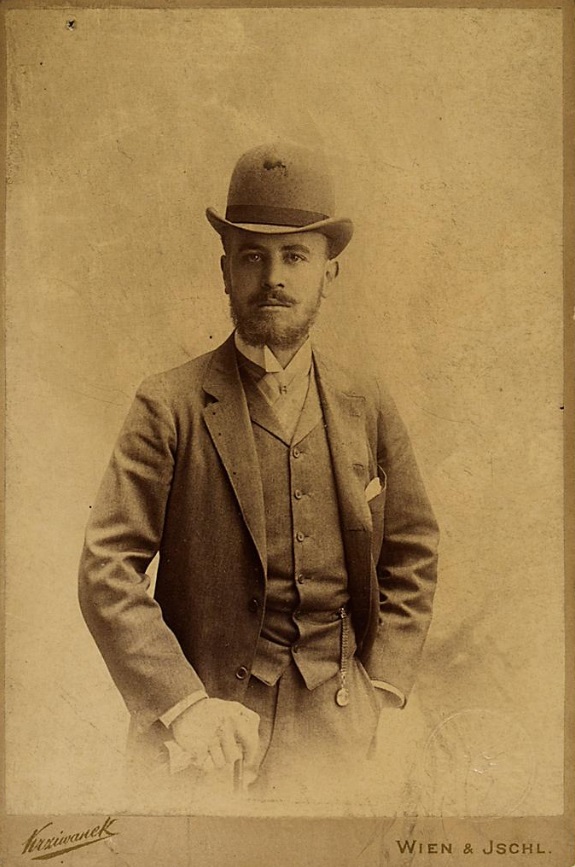 Although his pieces have long dropped from the schedules, even in central Europe, Carl Weinberger’s attractive dance-rhythmed scores were heard not only in Vienna, but in Germany, in Hungary, in Italy and as far afield as America, during the last decade of the 19th century and the earliest years of the 20th, and he continued to produce music for the theatre until well after the First World War. If none of his Operetten scored the kind of success which would make it last for half a century, he regularly found respectable runs and only a handful of genuine failures.

His first piece, Pagenstreiche, an adaptation of Kotzebue’s comedy (set with rather more success in Hungary by József Konti as A kopé), was produced by Camillo Walzel at the Theater an der Wien when the composer was 27 years of age, and it won only a dozen performances before being withdrawn, but the second, Die Uhlanen, was played 34 times at the Carltheater and again at Berlin’s Thomastheater (30 April 1892), whilst the third, Lachende Erben, won a genuine success. It followed 33 performances in Vienna with a production at Berlin’s Theater Unter den Linden (15 January 1893), another at Budapest’s Budai Színkör (2 June 1893) and was played at New York’s German-language Irving Place Theater (25 December 1893) by José Ferenczy’s touring Operette company. 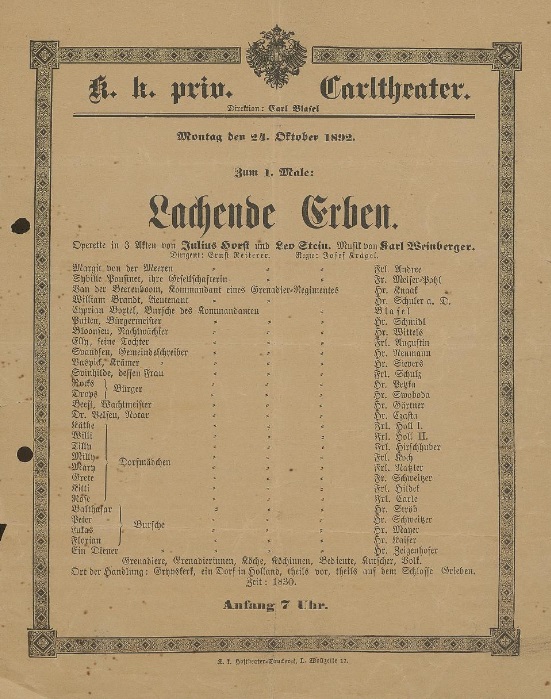 Weinberger had a further success with Die Karlsschülerin, played 59 times at the Theater an der Wien with Ilka Pálmay adding not a little to its attractions in the rôle of the leading boy, in Frankfurt, Hamburg and again at Budapest’s Népszinház (Hektor kisasszony 16 May 1903), but two efforts to make an Operette out of Toché and Blum’s French vaudeville La Maison Tamponin (Palais-Royal, 22 March 1893) were less happy: Die Prima Ballerina was played 25 times at the Carltheater and again at Berlin’s Thalia-Theater (24 October 1896) whilst Auch so eine!, produced six years later at the Theater in der Josefstadt (18 October 1901), managed only 27 nights.

However, with Der Schmetterling he found another fair success. Produced at the Theater an der Wien, with Julie Kopácsi-Karczag top-billed, it was played 57 times there and was later seen at Berlin’s Theater des Westens (29 November 1906, 14 perfs) as well as in Italy. Die Blumen-Mary, the following year, had Ilka Pálmay playing a New York florist, Carl Blasel an American umbrella manufacturer, and a respectable Vienna run (41 performances) before crossing the border (Metropoltheater, 17 November 1898), whilst Adam und Eva, which featured Girardi and American divette Marie Halton in four scenes of love through the ages (Josef and Mme Putiphar, Quixote and Dulcinea etc) up to the present day, was played 52 times at the Carltheater. Annie Dirkens was Die Diva (the title had been unlucky for Offenbach, too) just 22 times, and Ilka Pálmay showed that she had Das gewisse Etwas (otherwise ‘it’) for 25 nights before the piece went on to Hungary (Az izé, Népszinház ad Jenö Heltai, Miksa Márton, 26 April 1902) where it won a distinct popularity through 31 performances.

Weinberger’s name then slipped from the schedules for a number of years, but he returned to the forefront with an adaptation from Wichert called Die romantische Frau which was played by Vienna’s Die lustige Witwe stars Treumann and Mizzi Günther through a run of 73 nights. However, the composer had his longest Vienna run of all when Oscar Fronz produced Der Frechling with Fritz Werner starred for 86 performances at the Bürgertheater. Drei arme Teufel, produced in Munich, subsequently came to the Bürgertheater as well (15 June 1923, 51 performances), but after this the composer contributed little more to the metropolitan musical stage, his few remaining theatre pieces being either on a small scale or for regional houses. 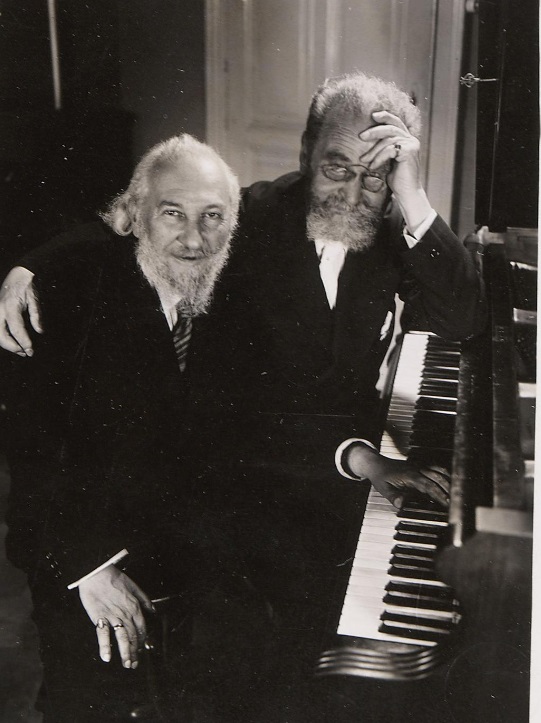