Great Malvern is an attractive spa town of 30,000 souls, nestling in the English Midlands and surrounded by the Malvern Hills which inspired Elgar and Bernard Shaw, to name but two. The Malvern Theatres were created in 2001 using the town’s Winter Garden, which has a lovely hillside situation; there are two theatres, a cinema and a restaurant programming a wide range of entertainment all the year round for the town’s many visitors. The National Gilbert & Sullivan Opera Company, whose production of The Pirates of Penzance I reviewed favourably a few weeks ago, tours to the larger theatre, seating 860 and dating from the 1930s, every year. I was lucky enough to catch their new production of one of G&S’s less frequently performed operettas, Princess Ida. 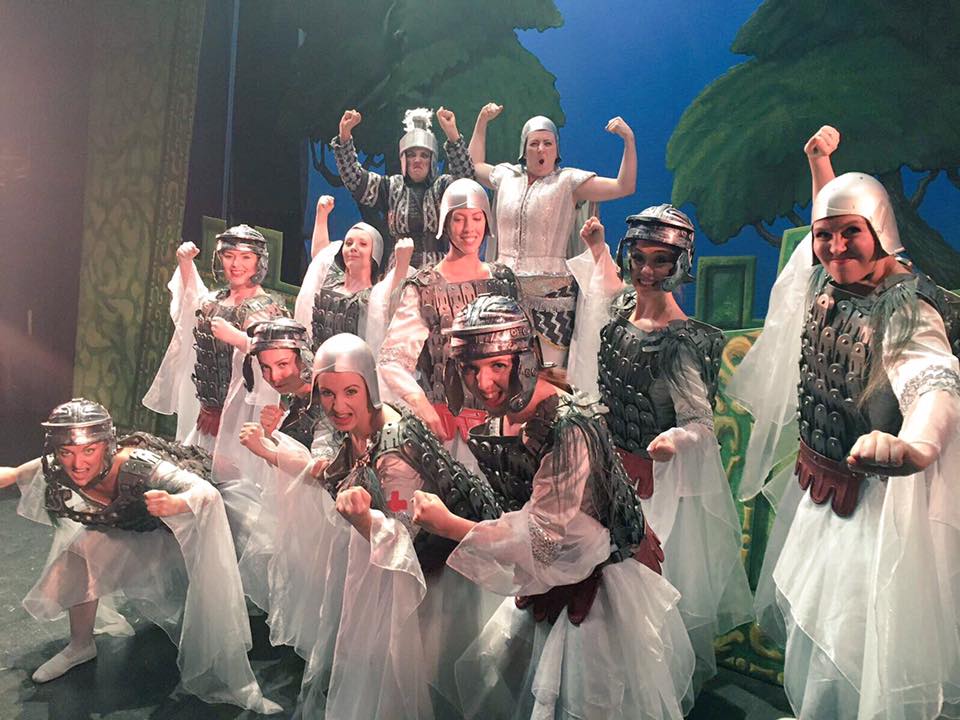 Why it is less frequently performed is difficult to understand, as it contains much of Sullivan’s most inspired music, even if the libretto is in three acts and in blank verse. This is because it is based on one of Gilbert’s plays, The Princess, in itself a ‘respectful perversion’ of Tennyson’s poem – which of course you will all have read! 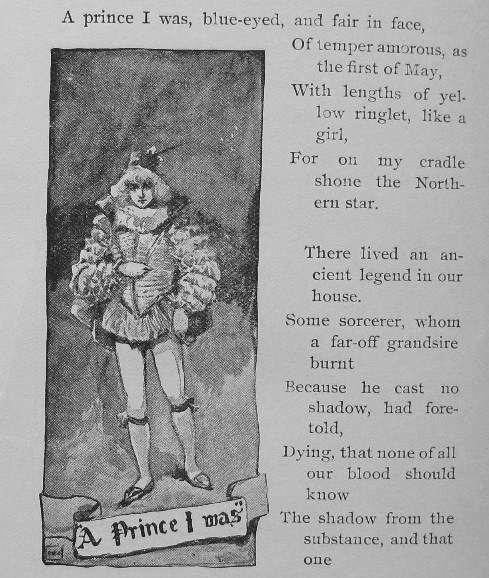 “A prince I was”: Charles Howard Johnson’s illustration for the 1890 edition of Tennyson’s poem.

The book is in fact, very witty, especially in this traditional production by Vivian Coates, whose sense of pace and lightness of touch ensures that the piece speeds along. Although traditional, there are many imaginative and inventive touches, such as the trio “I am a maiden cold and stately,” during which the three friends Prince Hilarion (a suitably romantic Laurie Slovin), Cyril (Nicholas Sales luxuriating in a ringing tenor voice with thrilling high notes) and Florian (Matthew Kellett who makes the most of his opportunities in a secondary role) change costume from men to women.

This is so deft and funny that it deserves at least one encore so that we can marvel at the antics the three get up to!

The plot concerns King Gama’s daughter, Ida, married as a baby to Hilarion, who believes that man, being descended from the apes (Lady Psyche – Natalie Montakhab in superb voice – sings: “Darwinian man, though well behaved, At best is only a monkey shaved!”) is an inferior species to women, so shuts herself away in a high-walled university with fanatical female followers.

The three friends above enter the castle secretly as women but are discovered (“two are tenors, one is a baritone”) and condemned to death. Ida relents only when Hilarion points out that without men the human race would quickly die out, which, being a woman, Ida had not thought of!

There is plenty of scope here for many politically incorrect themes, which Gilbert exploits to the full – as does this production! 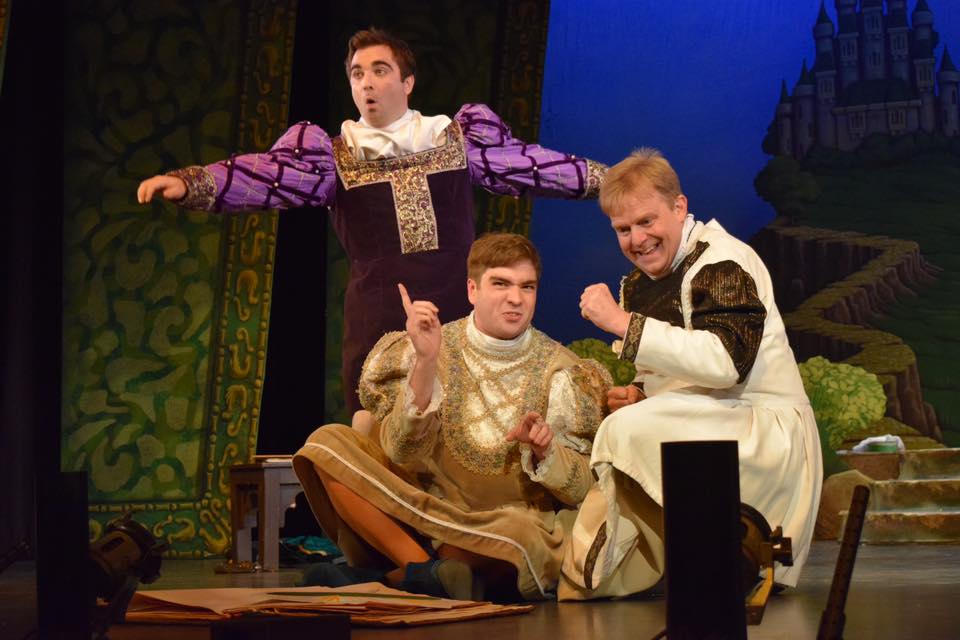 One of the many real pleasures of this new staging are the set designs by Paul Lazell. He has designed a basic set used for all three acts, giving much room onstage for the large cast of over 30, with cleverly painted insets which are not only very William Morris, but also beautiful and highly functional, green being the slightly surprising dominant color.  Best of all is the castle for Act Two, which is very stylish and evocative, as is the rest of the production! 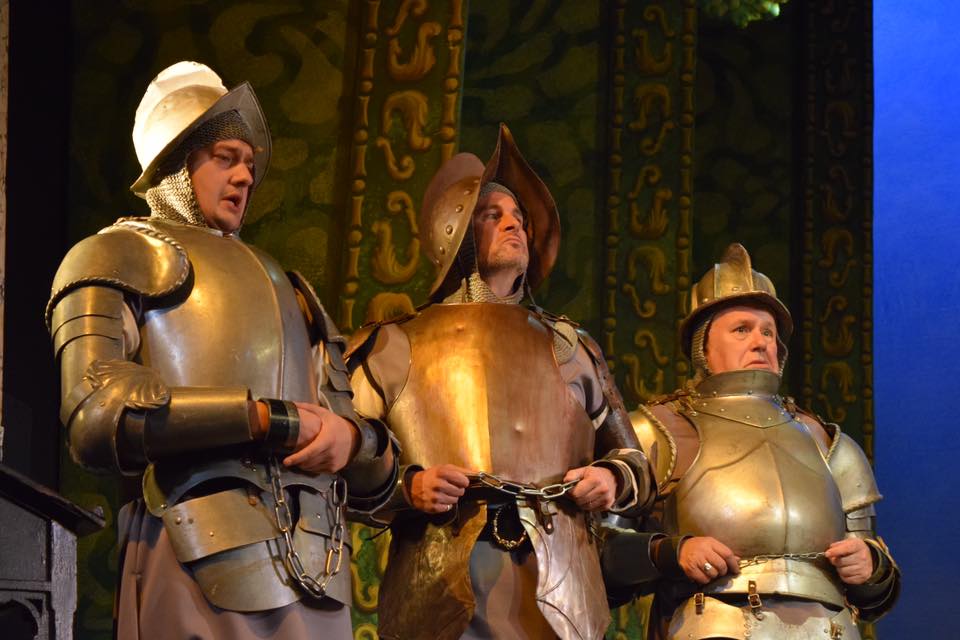 Members of the cast I have not mentioned include Donald Maxwell as King Hildebrand, Hilarion’s father. His rich bass and articulation of both song and dialogue greatly aided the characterisation of his role. Princess Ida herself needs a strong operatic soprano as both her songs are, to all intents and purposes, parodies of the grand opera of Meyerbeer et al; the company have a real find in Emma Walsh, who essayed all her singing effortlessly, even if her dialogue needed slightly more projection. Her father, King Gama, was in the very capable hands of G&S expert Richard Suart: very funny when complaining that, as a wizened old man, he, Victor Meldrew like, had nothing to grumble at! (Only British people over 60 years of age with a TV will understand the reference, I assume.) 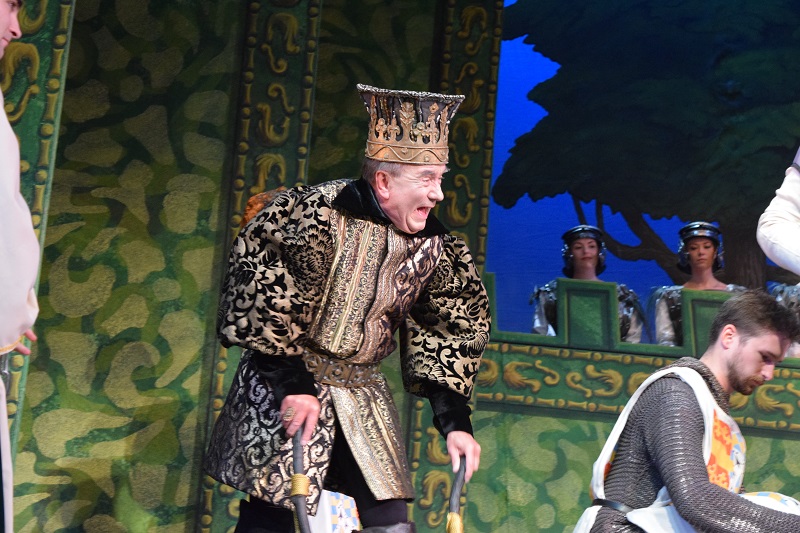 Richard Suart as King Gama in Act 3 – he has been imprisoned by Hildebrand and tortured by being given everything he could possibly want. (Photo: National Gilbert & Sullivan Opera Company)

Ida’s three brothers, who have no dialogue at all, but three songs, were hugely enjoyable both to watch and listen to. Arac’s (James Cleverton) third act pastiche baroque number, in which the three brothers (the other two sung by Matthew Sivester and Stephen Godward) remove their armour because it is too cumbersome to fight in being one of the many musical highlights of this production, especially the mock-Handelian ornamentation of the final verse: again an example of the imagination of the director.

The role of Gilbert’s “old maid” role (Lady Blanche , deputy principal of the university, who covets Ida’s role as principal) was wittily acted by Gaynor Keeble. Not only could she easily get every laugh in her dialogue, she also had the necessary authority and comic timing plus a gorgeous real contralto singing voice. It was a shame that, as so often, her second act song was omitted, but, by way of compensation, her third act costume was very witty.

Musically, I am unable to fault this production. The chorus of 17 sung and acted their hearts out, when they were not offstage changing costume! The orchestra, also of 17, and using a slightly reduced version of Sullivan’s original – i.e. single wind and brass – were, and I have not used this word before so I will now, superb! Their playing, under the baton of Aiden Faughey, was crisp, stylish, elegant, poised and brought out all the nuances of Sullivan’s orchestration, as well as accompanying: never swamping the singers. 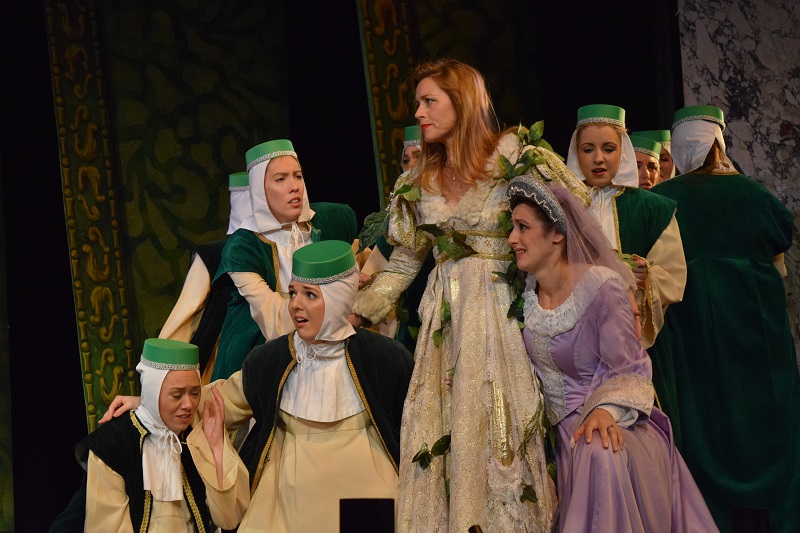 Princess Ida (Emma Walsh) at the end of Act 2 having been chased by Hilarion(Laurie Slovin) and fallen into the river and then saved by Hilarion (all this off-stage) – hence the green water weeds. (Photo: National Gilbert & Sullivan Opera Company)

Mention must also be made of the inventive and always appropriate choreography of Mary McDonagh and the excellent lighting design by David Marsden which not only aided the creation of mood, yet also ensured that faces could always be seen. The lavish, often hilarious, costumes were designed and made by Costume Workshop and Denis Blatchford.

The National Gilbert & Sullivan Opera Company clearly spent a great deal of loving care on this production, care which was well rewarded. The nearly capacity audience in Malvern clearly enjoyed this wonderful operetta as much as I did. It demonstrates, as did English Touring Opera’s Patience earlier this year, that G&S works best when it is played straight rather than being ‘sent up’, as in Sacha Regan’s  recent dull  all-male Mikado which I reviewed on tour at Brighton a few months ago, and can still be very amusing and relevant to a modern audience. 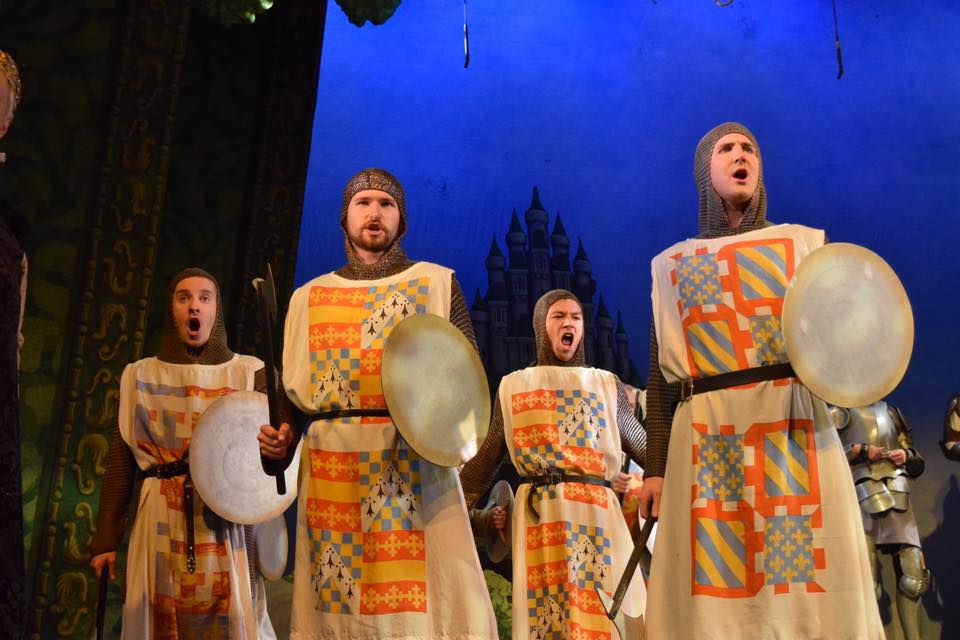 I can honestly say that this performance of Princess Ida gave me one of the most enjoyable and uplifting evenings I have spent in the theatre this year. Next year the company hopes to stage Ruddigore, again not one of the most frequently performed in the G&S canon, and Sullivan and Grundy’s Haddon Hall not professionally produced for many (125?) years but with some lovely music akin to Edward German.

No recording of Princess Ida is really satisfactory, but the most recommendable is the D’Oyly Carte one, conducted by Isidore Godfrey and recorded in 1954. It is available on several CD labels, but by far the best transfer is on Chris Webster’s Sounds on CD label: the only release using the original master tapes –  the others are dubbings from LPs.