New Sussex Opera is a self-funding organisation in the south-east of England that specialises in performing rarely heard operas and operettas, using an amateur chorus, some professional soloists, and a small orchestra, touring to a few theatres in Sussex as well as London.

Their latest production, following Offenbach’s La Princesse de Trebizonde, is the first British production of the same composer’s Belle Lurette for over 140 years.

In March 2020, Kevin Clarke wrote a fascinating article for the Operetta Research Center concerning the three recordings of the work which exist (for more details click here), and Kurt Gänzl also includes the operetta in his Encyclopaedia of the Musical Theatre, so I will try not to repeat too much of what they have already written.

Musically, Belle Lurette is superb, almost every number showing the composer at the height of his powers, since he composed it at the same time as The Tales of Hoffmann and “Mam’zelle Gnat”! 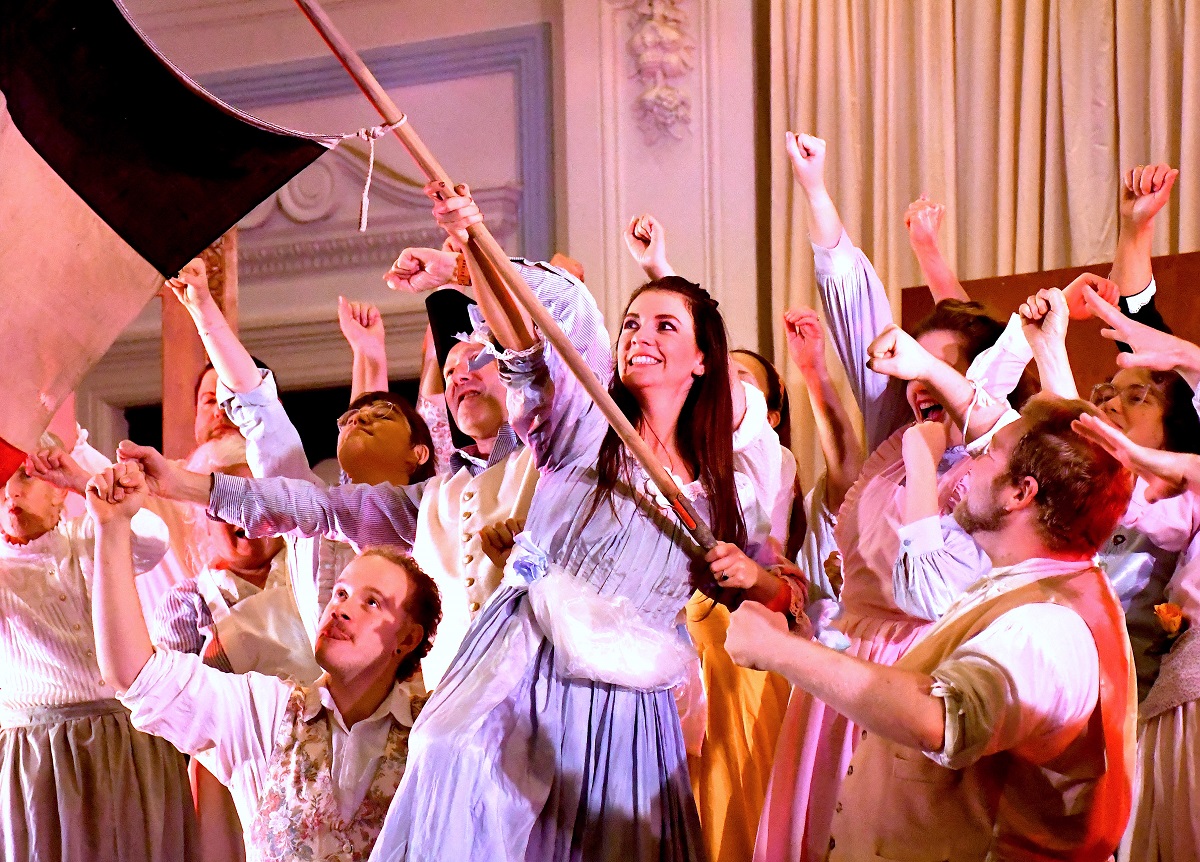 A revolutionary moment in “Belle Lurette” at New Sussex Opera, with the heroine leading the protest against the aristocracy. (Photo: Colin Chapman)

In fact, this is the composer’s last full-length operetta, lasting 150 minutes, plus interval, and it was wonderful to hear it musically complete. All recordings available are abridged or just ‘highlights’, even the Leipzig version which Kevin Clarke enthused over, justifiably, only running out at 90 minutes, as most of these 1950s radio recordings did.

Offenbach died before completing it, so, as with Hoffmann, which was handed to Guiraud, Belle Lurette was given to Delibes to finish the orchestration and whatever else needed to be done. It was first performed in Paris in October 1880, a month after Offenbach’s death, but it has never ‘taken off’ – not because of the music, but owing to the weak or almost non-existent plot! (At least it can appear to be non-existent, depending on how you tell it, obviously.)

Belle Lurette (Monica McGhee) is a launderess (as are all the female chorus) in an establishment run by Marcelline (Kristin Finnigan), a domineering contralto harridan, similar to one of W. S. Gilbert’s “old ladies”. 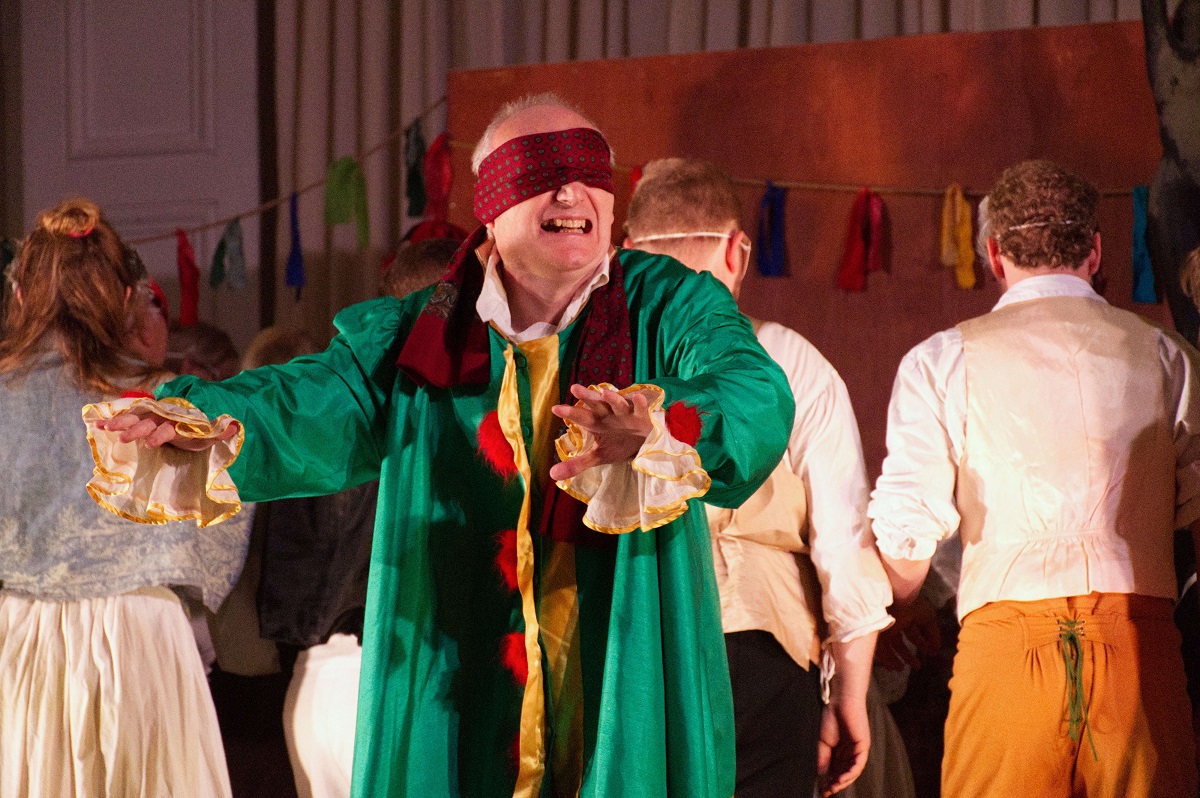 At the end of Act One the Duc de Marly (Robin Bailey) enters and, without even trying to woo her, says he is going to marry Lurette, which he does in Act Two and then promptly disappears. We are told that he only married to please his aunt, and now he doesn’t want Lurette anymore! In Act Three he decides that after all he does want her, and she, meekly, acquiesces!

There is an amusing sub-plot concerning Marcelline and Marly’s servant Malicorne (Paul Featherstone), which is, to be frank, more interesting.

Paul Featherstone is also responsible for the very witty English “version” – very much in the spirit of Geoffrey Dunn’s Offenbach translations for Sadler’s Wells Opera many years ago. The two hundred or so members of the audience at Eastbourne’s Devonshire Park Theatre clearly enjoyed the, at times, rather risqué jokes whether in the dialogue or music! 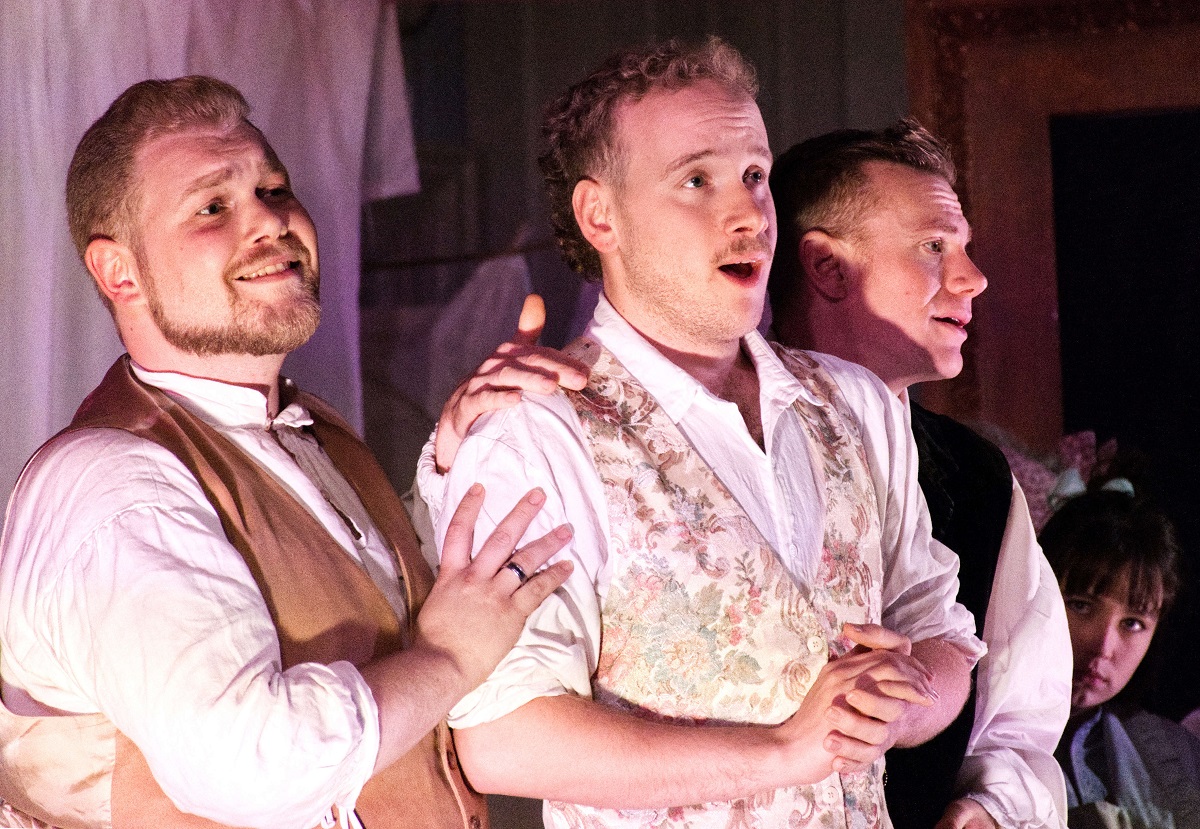 This was obviously a labour of love for Featherstone and he has done his job superbly, most of the cast ensuring that every word was crystal clear.

In role as Malicorne, he was also very amusing, having some of the wittiest songs and dialogue.

The three suitors who in vain hope for Lurette’s hand in marriage were sung and acted with great aplomb by Michael Ferguson, Cameron Mitchell and Tristan Stocks. Ferguson, especially, was a delight to hear: his ringing baritone proving to be a superb instrument throughout its range and his acting having a real sense of style.

Belle Lurette herself was gracefully sung by Monica McGhee, even if her enunciation was not as clear as it could have been. She is on stage for most of the time and her undoubted acting talents held the show together.

The chorus sang lustily but appeared to have had very little stage direction (David Foster) as they just “stood” around in lines: little attempt seemed to have been made to give each of them a role as human beings – they were just a choir! 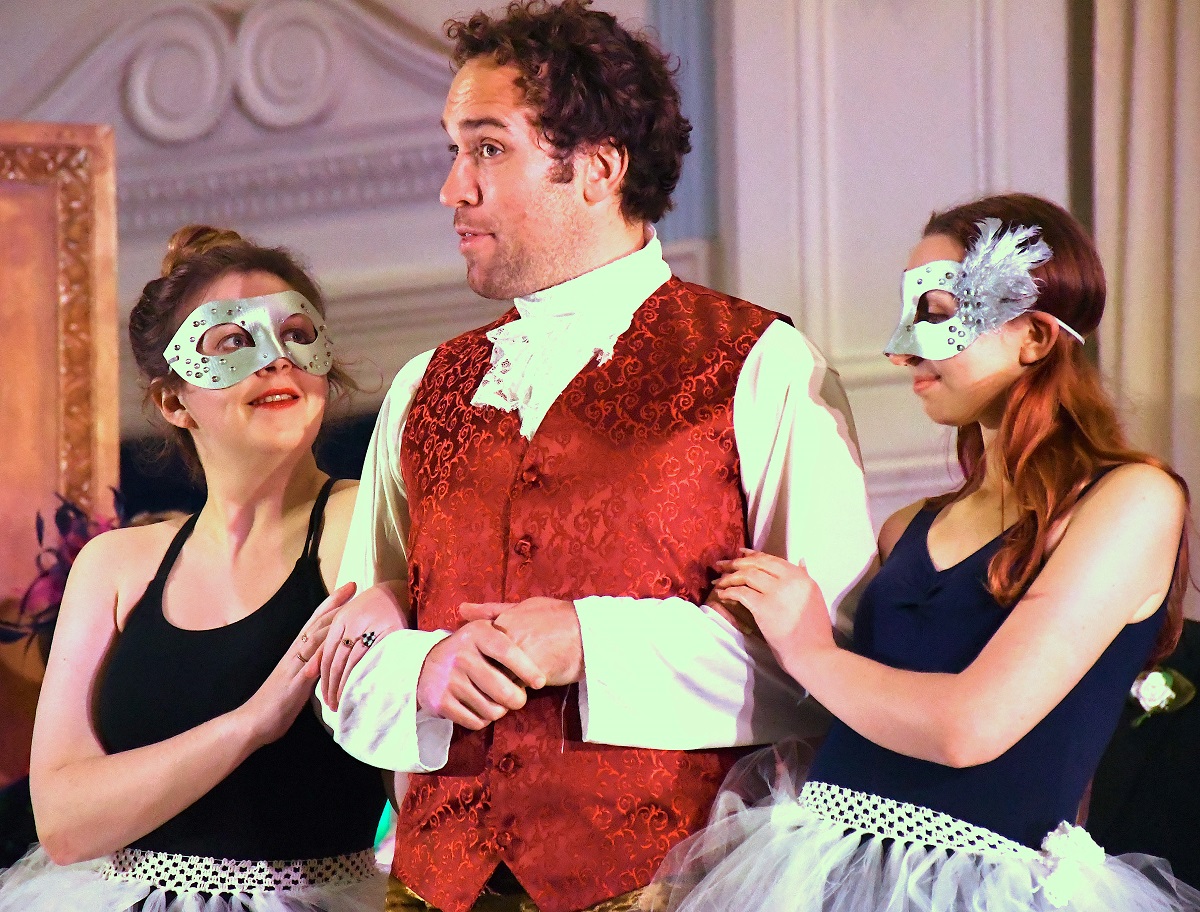 An exception was Kiera Smitheram in the secondary role of Toinette, one of the laundry girls, who chain smoked throughout and made the most of each of the few lines that she had: whenever she appeared, she was always ‘in role’ whilst never taking the focus away from others.

Delibes’ and Offenbach’s orchestration was re-orchestrated by James Widden, the leader, for an orchestra of twelve: string quintet, single wind and brass plus percussion, who fitted cosily into the small theatre pit. Although it was a shame not to hear the original orchestration, this was a more than adequate substitute, especially as conducted with great verve by Toby Purser, really sounding like Offenbach! 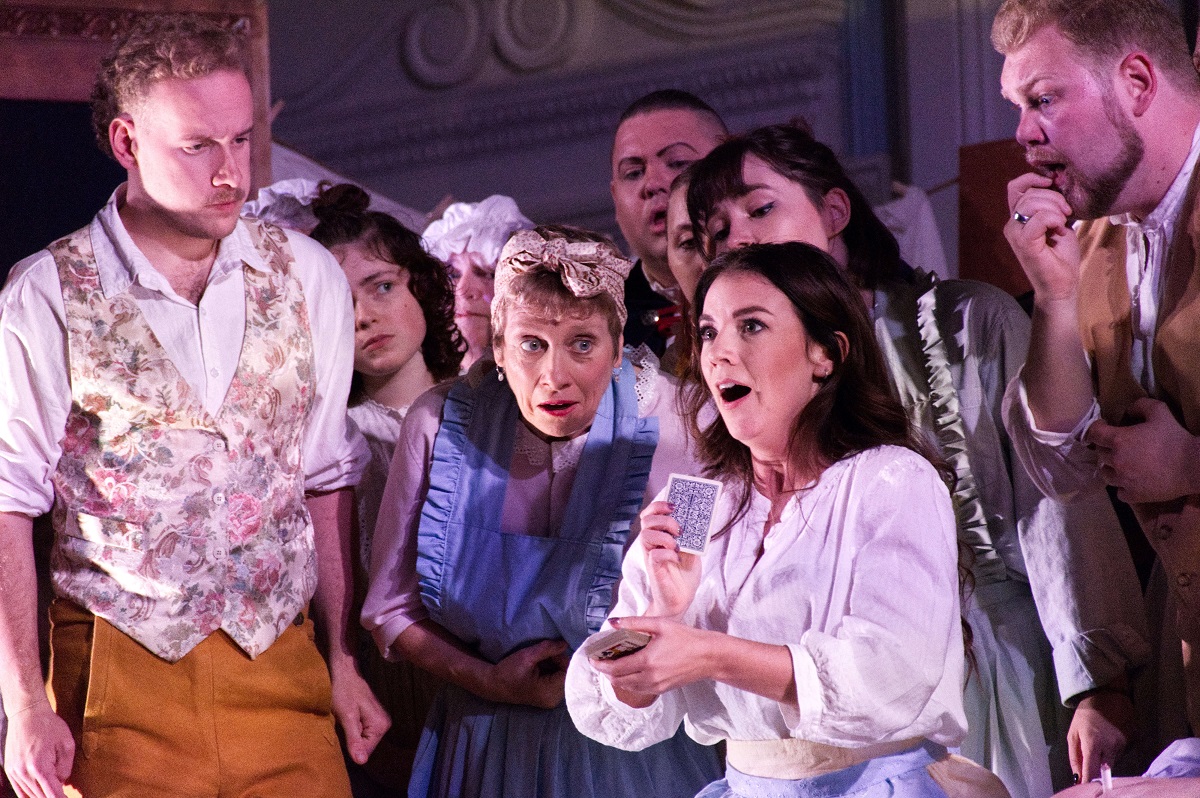 For readers living in the UK, there is one more performance at London’s Bloomsbury Theatre, which is well worth searching out as NSO’s production more than does Offenbach justice – and it is great fun!