It’s interesting how you can have a full cast recording sitting on your CD shelf for decades, and it never makes an impact. And then you suddenly discover the recording and the show it’s about much later. This is what happened to me with the Opera Rara three-disc-set of Offenbach’s Robinson Crusoe. It was recorded at Henry Wood Hall in London in 1980, based on an English translation by Don White of the original Eugène Cormon and Hector Crémieux libretto. This English version – with some remarkably brilliant rhymes – had its premiere in 1973 at the Camden Festival, London. It re-surfaced at various places later, till it was immortalized on disc. It remains, to this day, one of the few English language full cast Offenbach recordings. In an age where we’re constantly discussing identity politics, cultural appropriation, the representation of People of Color (PoC), the problem of black face, and new aspects in operetta history, a show like the 1867 Robinson Crusoé really begs to be looked at afresh, with its dancing cannibals, a black-face Good Man Friday played by a mezzo soprano, with it’s too-good-to-be-true Englishmen, a mad encounter between ‘savages’ and British ship-wreck survivors on a desert island. And let’s not forget the pirates in act 3! 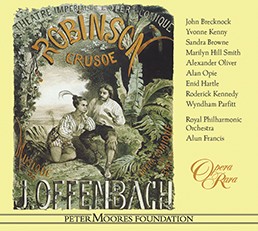 It was a 1867 caricature of Célestine Galli-Marié as Vendredi/Good Man Friday that I recently came across that sparked my interest in Robinson Crusoe anew. Because it made me wonder about black characters in operetta. Vendredi doesn’t feature in Stewart F. Lane’s book Black Broadway, even though Offenbach opéra comique came to New York in September 1875. Apparently, it didn’t leave a lasting mark. That honor goes to The Creole Show and The Octoroons, both black variety acts. The latter featured Matilda Sissiertta Joyner Jones, the “black Patti.” She could have been a superb Vendredi, but did not appear in the 1875 New York production. Instead she performed with a group called Black Patti’s Troubadors. By the way, briefly before the Paris premiere of Robinson Crusoé, the Ku Klux Klan was founded in Pulaski, Tennessee by Confederate Army veterans that tried to assert white supremacy. 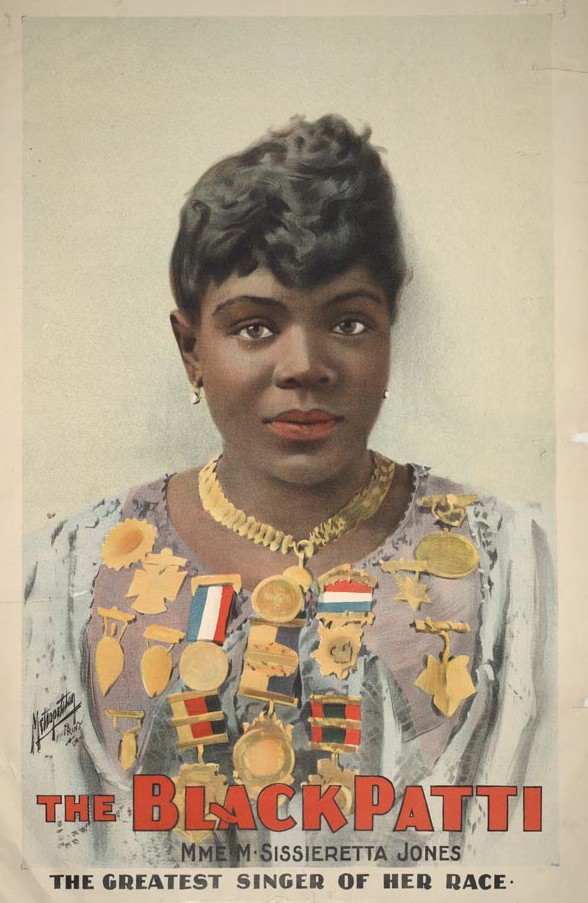 In the Opera Rara booklet we read that Robinson Crusoé was “favorably received” in Paris by the original Opéra Comique audience. But that might well be wishful thinking on the part of the nameless author, because Kurt Gänzl calls it a “32-performance failure” in his Encyclopedia of the Musical Theatre. Mr. Gänzl also discusses the work and the Opera Rara recording in Musical Theatre on Record (1990) and says: “The piece has some tuneful moments but none of the sparkle of the favourite works.” Gänzl blames this on Offenbach trying to write a “proper light opera” instead of one of his usual mad-cap Monty Pythonesque operettas. But if you look closely, you’ll notice a lot of mad-cap action (and music) in Robinson Crusoé that could be straight out of any grander-than-grand opéra bouffe. The famous number of the cannibal cook stirring the pot into which the buffo soprano/tenor are about to be thrown is one example. But also the fact that this cook turns out to be Jim Cocks from Bristol, bumping into fellow British countrymen (from the corner of his old street) in the middle of the jungle on an unnamed island, inhabited by the Tamayos who were originally vegetarians until they met a missionary (“But a man can’t live by bread, said a passing Presbyterian, so they ate him instead! … What a horrid thing to do! And to a missionary too! To end up on a barbeque! We’re really in a pretty stew!”) It’s Ba-ta-clan all over, with added cannibalism. But it’s certainly not “proper light opera.”

Anyone wishing to examine post-colonialism could have a feast with this missionary-in-a-stew story! 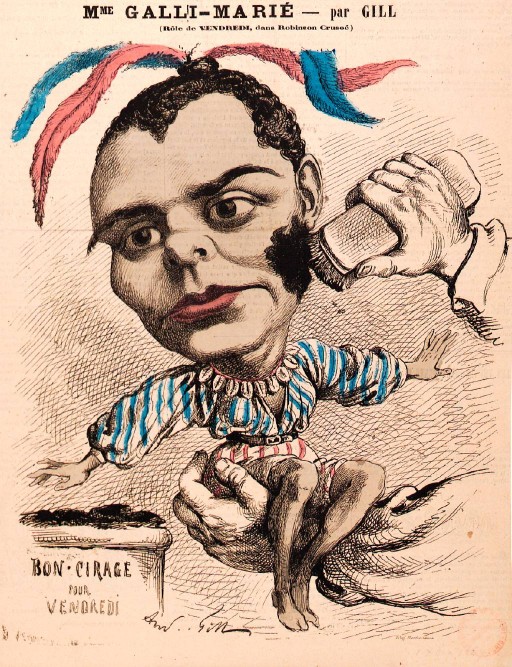 It’s true that Offenbach is a little more lyrical in Robinson Crusoé than is his usual want; but at the same time he wrote some of the ensembles, choruses and low comedy duets very much in the style of opéra bouffe. Which might explain why they didn’t go down too well with the original Opéra Comique audience. As Patrick O’Connor has pointed out, the people going to the Opéra Comique were “more solidly bourgeois” than the Théâtre du Palais-Royal or Les Bouffes Parisiens crowd, i.e. Offenbach’s usual demi-monde audience. They came to the Opéra Comique to marry off their daughters to respectable young suitors. The half-nude prancing around of natives to wild rhythms – and the sacrifice at the stake of a blonde soprano as pleasure maid to God Saranah – did not fit that respectability agenda. Not to mention the highly compromising scenes between Vendredi (played by the sensuous mezzo soprano who later became Bizet’s first Carmen), singing duets with Robinson in which they both dream of fleshly lust.

Anyone wishing to examine LGBT aspects in musical theater could have a feast with this, too!

Basically, the show offers many musical riches (such as the glorious Sea Symphony that opens act 2, almost like an answer to Wagner’s Lohengrin prelude and with clear echoes of the Barcarole) and many interesting plot elements that inventive stage directors could dig their teeth into. However, on the Opera Rara discs you get “several pedestrian performances,” as Kurt Gänzl points out, making the show sound like “a rather self-conscious affair.” That’s very true, sadly. 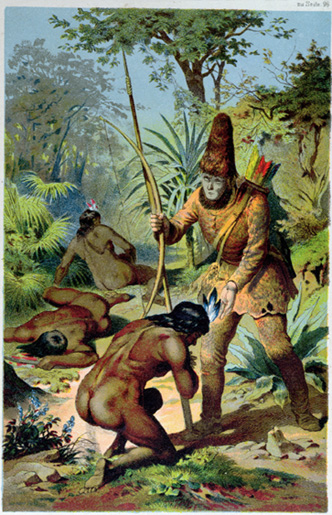 Crusoe standing over Friday after he frees him from the cannibals. Drawing by Carl Offterdinger (1829-89).

I recently listened to the new Max Emanuel Cencic disc of Nicola Porpora arias (Decca) and was amazed by the vibrant orchestral playing by Armonia Atenea conducted by George Petrou. That’s the kind of bounce you ideally want for Offenbach, not the compactness the Royal Philharmonic Orchestra under Alun Francis offers here. [To be fair, the often celebrated Offenbach recordings of Marc Minkowksy have none of that desirable bounce either.] And obviously a more vigorous cast would have been an advantage in such an adventure story. Most of all, Robinson Crusoe as sung by John Brecknock on Opera Rara sounds like a total bore. Stiff upper lip, but without being funny. He doesn’t come across as someone who’d survive the jungle (and the cannibals) for a decade.

The sopranos Yvonne Kenny as Crusoe’s love interest (and cousin) Edwige and Marilyn Hill Smith as the maid Suzanne sing splendidly. But when Edwige is led to the stake to be sacrificed and Offenbach gives her one of the most glorious coloratura waltzes in his oeuvre, you really need a bit more over-the-top sparkle. Remember how Joan Sutherland sang this number? Sutherland might not have been a believable sacrifice for Saranah, but she knows how to pull all the stops out on the way to Edwige’s death – only to be rescued, last minute, by a madly-in-love Friday. Who lusts after Edwige’s white skin. (“The whitest flower growing in the forest, the whitest cloud above, the whitest plumage of the whitest dove, in shame would hide so dark beside, beside the beauty of this goddess of love. To love her from afar would be enough for me,” sings Friday in the finale of Act II.)

Anyone interested in critical whiteness theories could have a feast with this, obviously! 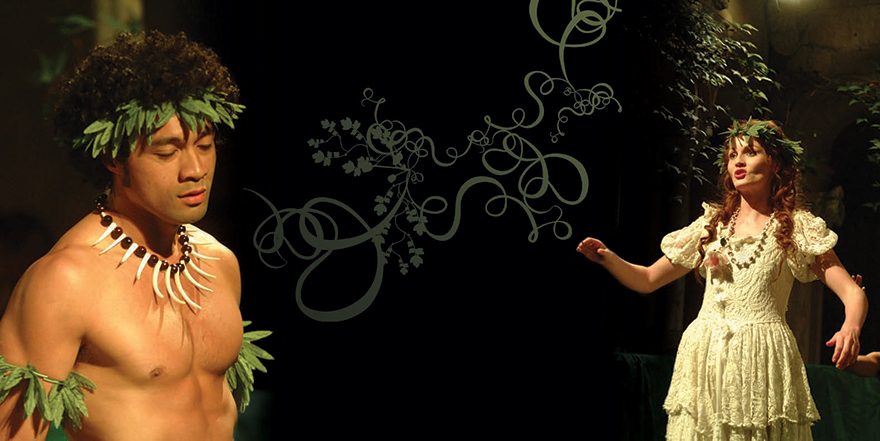 At the time of the recording, the Opera Rara cast appeared with Robinson Crusoe at the Royal Albert Hall and the Proms. Since then the Ohio Light Opera performed the show in English, Opera della Luna presented a novel English translation by Jeff Clarke in 1994 that was shown again at the Iford Festival in 2004. If you click your way around YouTube you’ll find more versions as clips.

Surprisingly, there’s no French recording, except for Edwige’s aria. The Opera Rara booklet claims the original “suffered from one of Cormon and Crémieux’s more turgid librettos,” but that’s hard to believe considering that Crémieux is one of Offenbach’s most celebrated writing partners. Did he really have a total off-day when he penned Robinson Crusoe?

All in all, it’s high time for a new recorded version. If the Don White translation should be used again, then a modern cast with some adept musical comedy people for the comedy roles would be welcome to make the jungle come alive in a way unimaginable back in 1980. And that is particularly true for the bland Alan Opie as Jim Cocks. His cooking song – with a cannibal recipe – needs to be far more salacious. And scary. Plus funny.

The same is true if the French version were to be recorded, for the first time ever. Offenbach plays with bizarre and contrasting elements in Robinson Crusoé, and you should be able to hear these contrasts, the madness, and the shock he probably provoked with the “solidly bourgeois” original audience who didn’t know what hit them when the ‘respectable’ opening act, set in a parlor room in Bristol, is suddenly swept away for a queer utopia somewhere in the middle of the sea where blacks and whites become best friend and dream together of lust and love. And where natives are turned into cannibals by missionaries.

I must confess, these cannibal numbers and the sacrifice ceremony of the blonde hand maiden reminded me strongly of Emmerich Kalman’s 1927 Broadway operetta Golden Dawn (with a libretto by Oscar Hammerstein II). It was later turned into an early talkie with Vivienne Segal, so you can still see how such a ritual killing can be played, and what visual effects a “Totem Tom Tom” number can make outside of Friml’s Rose-Marie.

So let’s hope some enterprising operetta company feels up to it and gives us a Robinson Crusoe for the 21st century. The Offenbach score deserves another chance. And the various plot elements deserve a new serious discussion. Would it be racist to perform Robinson Crusoé today? How could you perform it and not appear racist? Is it enough to cast a Trinidad born mezzo as Friday, or could you re-think and re-cast the entire show? What exactly happens between Friday and Robinson during all these years of dreaming of love under palm trees? And what are the pirates doing on that island, without a female in sight?

Offenbach’s very lusty music gives some answers. All you need to do is play his music as lusty as it is written, and not as a “proper light opera.” Because when Offenbach is played “proper” he loses his sparkle and originality. And there’s plenty of sparkle in Robinson Crusoé.